A last minute urgent work meeting required Claire to fly to New Zealand with about a weeks notice. I jumped at the chance to go with her and took a few days off work to wander the streets of Auckland while poor Claire had to work (which she enjoys anyway).

Checking in at the airport wasn’t the funnest experience thanks to me picking the wrong line for our plane and when we did end up at the right counter we had the worst qantas service ever. The lady was surly, made out like it was my fault she couldn’t find my booking cause I have an apostrophe in my name and when I tried to make light of the situation I was treated with a stare. Given that Claire and I were tired from our drive back from Pretty Beach it didn’t put us in the greatest mood. Luckily the flight was great although arriving at midnight is never a fun thing (even if it was 10pm our time). We got a taxi easily and spent the next 40 minutes getting to our hotel.

First thing I noticed when we came off the motorway is that the houses looked like vomit. Builders had built with no sense of design. To be fair though they were on the outskirts of town and they got nicer the closer you got to the CBD.

Arriving at the Sofitel we were greeted in French – something that is their “thing” all over the world I believe After the long day it was great to walk in to such a huge room and know it was ours for the next three days. It had an amazing bathroom with huge bath, shower with two different settings – handheld or rain from the top. The bed was the most comfortable bed I’ve ever slept on -apparently the trick is its a normal mattress with a feather underlay. An illy coffee pod machine that looked fancy but required a staff member to come and fix its peculiarities. 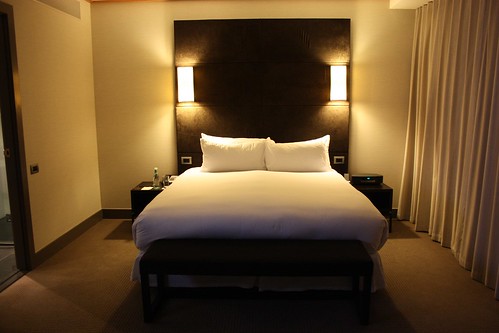 Bedroom at the Softiel Auckland 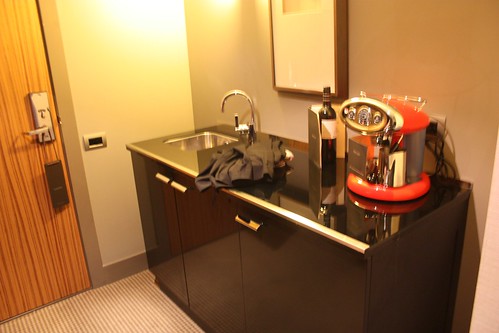 Claire left for her work meeting the next morning with about 6 hours sleep. My morning walk along the harbor was sunny and beautiful. Expensive boats lined the harbor while expensive apartments line the land. There is free wifi all around the cbd – even in Viaduct Harbour although I Had issues connecting – seems like you have to wait ages for the login page to turn up. Turned out that on the iphone u need to turn off automatic login. It’s main problem is you can’t really roam with it. You have 30mins to surf so you have to sit there and not go to another wifi base. 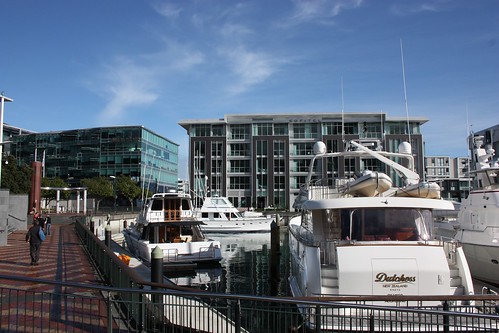 I wandered around the Viaduct Harbour to the ferry building and then to the Britomart Transport Centre which is a bus and train hub along with some boutique shops, cafes and restaurants.

Given that my ily coffee experience was not that great I found Espresso Workshop which supposedly had some of the best coffee in Auckland (based on a web search) and I can confirm it did. Also had a bacon, cheese and onion croissant that didn’t look like a croissant but tasted great. Tomato relish that came with it was amazing. Will try shakey isles tomorrow or next day to see how it compared. 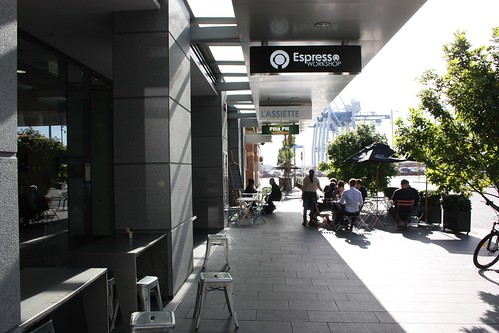 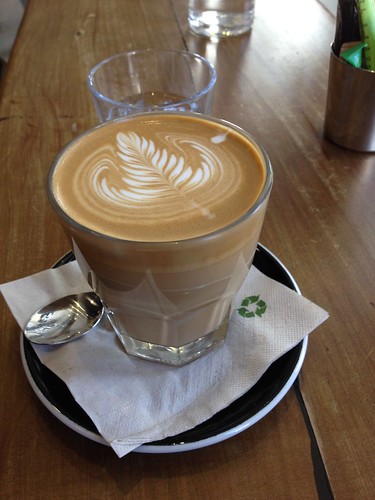 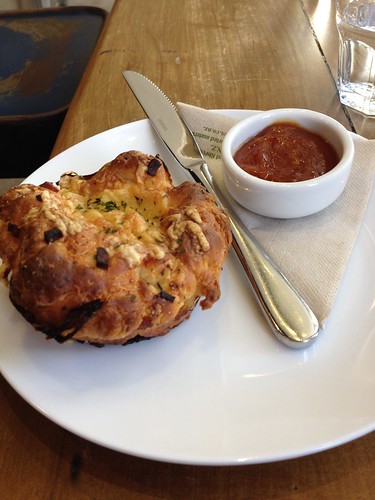 Britomart shops were nice – had a great chat with the manager of the Nike Store who actually had his collection on display. Even spotted a pair of my newly purchased 720 degrees Nike sbs. He was trying to convince me to pick up a pair of the nontaurage and I’m tempted. 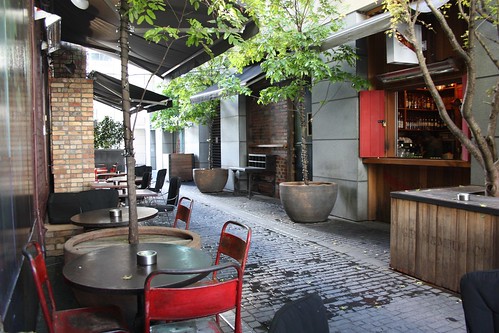 I wanted to get online quickly so I bought a sim card for Internet at the convenience store for $10, forgot i needed a min sim for the iphone, paid 2degrees another $5 to swap it to the mini, bought $30 of prepaid stuff, then put the sim in and realized that my iPhone is still locked to Telstra. Stupid! Decided I won’t use it at all and will save it for another trip if I come in the next 6 months.

Walked along Queen St admiring the laneways, thinking how it’s a mash of Australia, Uk and USA. It has a few chains Australia doesn’t have – like Wendy’s and Denny’s. Found and awesome shop at the uni end called Groovy Records which reminded me of Amoeba Records in San Francisco. They sold vinyl, CDs, graphic novels and books, vintage clothing, new clothing and coffee. Great store to browse. 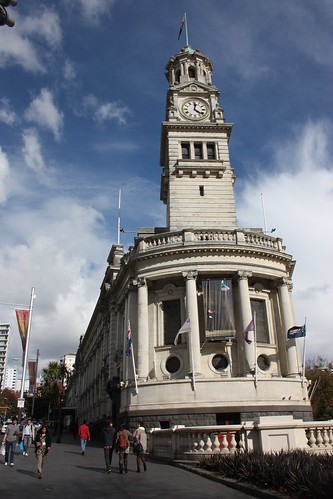 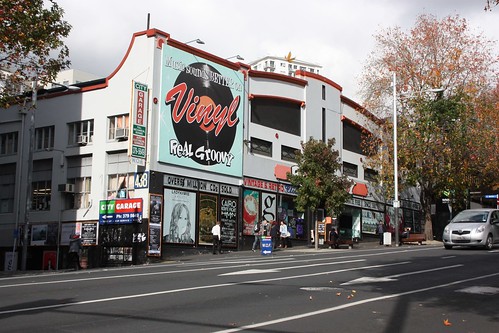 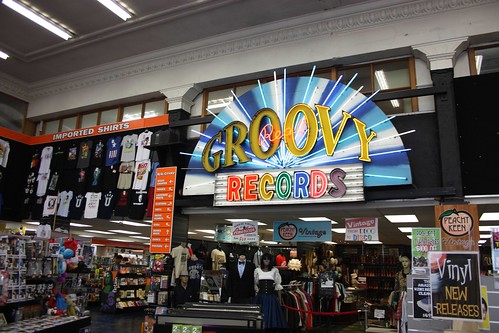 Walked all the way along Queen Street to K road and was puffed and hot from walking up the hill. K Road is where some of the seedier stuff in Auckland happens but during the day it just looks like a great place to have a coffee and people watch.

Got on the link bus just before the rain came down so decided to do the entire loop of the green linkline – known as the inner link. It went through Ponsonby, the CBD, Parnell and Newmarket. Saw lots of nice restaurants, a tonne of shops in Newmarket and a few places to return to. The bus was brand new with tv screens that had maps of where the bus was, announcements about the stops, live video and news headlines. It was probably the best bus service I have ever been on and the best thing was that nearly everyone had a seat to themselves because the buses came every 10 minutes. I got off at Star City and walked back to the hotel but not before buying a butter chicken pita from the Pita Pit across the road from our hotel.

Recovered from my adventures in the room with a bit of a nap and waited for Claire to get back. We headed out again not long after she arrived in the hunt for dinner. The Nike store manager had suggested a Mexican restaurant for dinner just a little further than the britomart so we decided to go there. We also wanted to visit a supermarket because that says a lot about a country, so we tried to fit that in too.

On arriving at the Mexican restaurant (helpfully called Mexico) we encountered a lineup and a noisy busy scene. Told we could maybe get a seat in 30 minutes we headed off to the countdown supermarket we were informed was nearby. Countdown is the name for what is essentially woolworths in Australia – same logo and everything. Claire had a great time discovering her english pg tips tea packaged 70s style and we spent a fair bit of time selecting some Cadbury chocolates that were made in NZ. Apparently the chocolates made in NZ are better but I couldn’t really tell the difference.

Back in Mexico they found us some space and we ordered up big on the shared stuff. Black bean dip, pumpkin tacos, pork tacos and some amazing chilli lime salt corn. We even had room to stop in at the movenpick and have some ice cream on the way back to the hotel. First impressions of Auckland were really impressive. 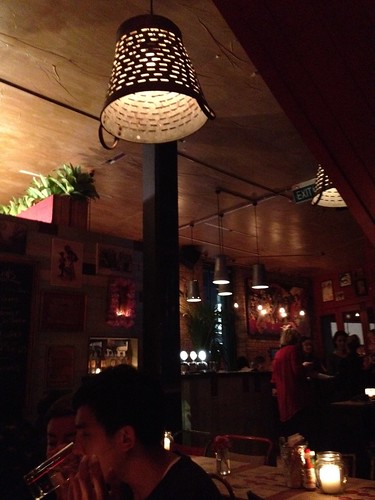 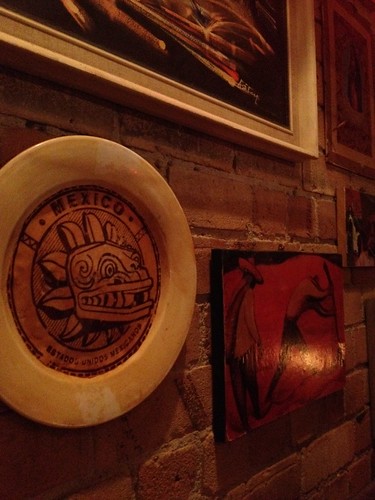 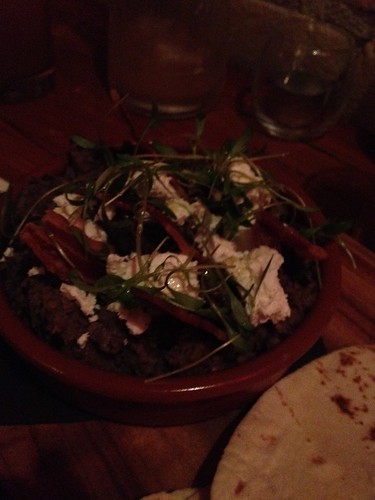 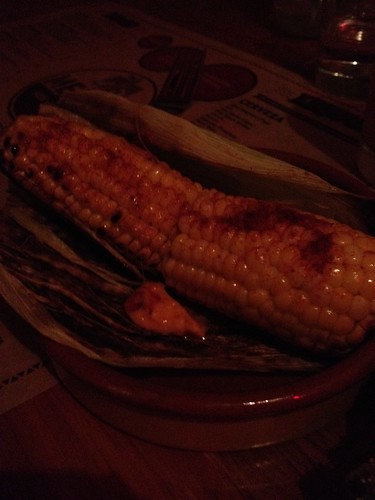