Alas, it was my final day in Thailand and my final day of the trip. 50 days as a solo traveller, although it didn’t feel like it thanks to twitter, facebook and the strangers I spoke to on the way. I spent the morning doing a final pack since I couldn’t really go swimming if I wanted to have a dry suitcase. The final pack took a long time and I had a big mess all over the room. 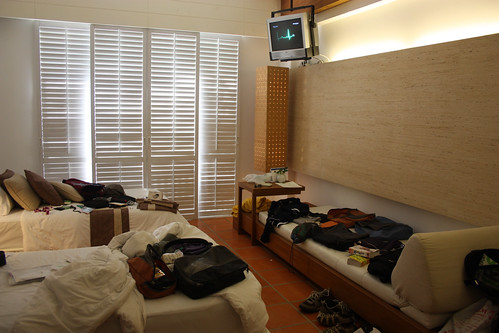 After packing I headed out for a breakfast of fruit and tried to kill some time before checkout. I booked myself on a mini bus to the airport around 3pm which was a hell of a lot cheaper than any of the other options the hotel was offering. When you are a solo traveller the mini bus is certainly the cheapest option. I went for a final walk around Patong Beach taking photos and got some nice shots of the pool I’d spent so long relaxing at. 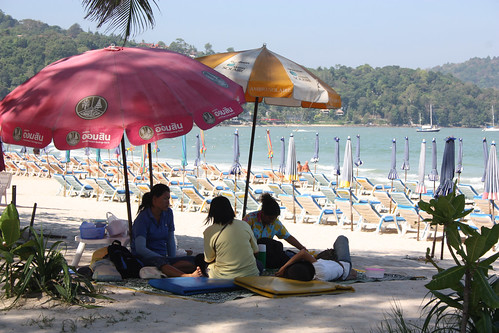 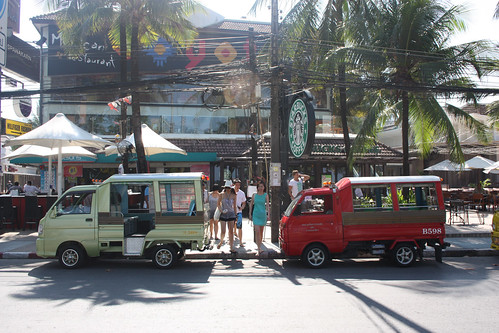 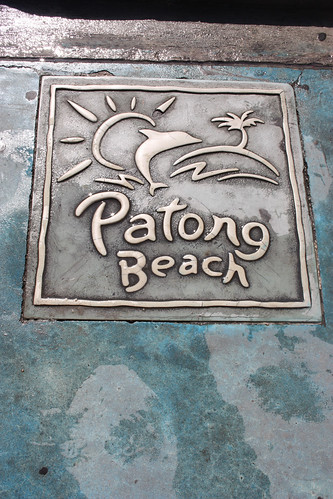 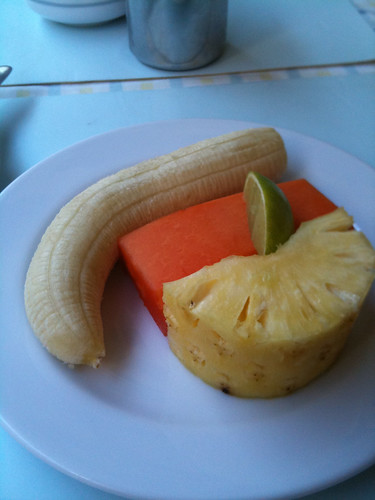 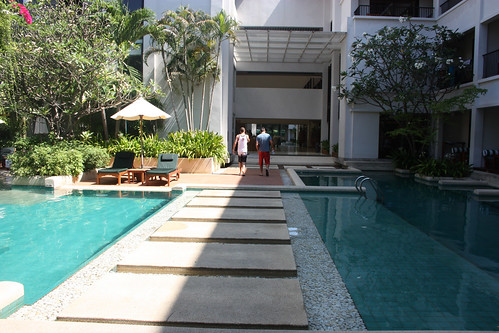 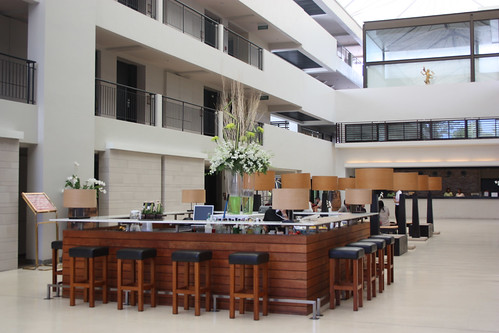 On check out, I asked the ladies about the drink they served on check-in. They said it was longan juice and it was made by cooking the fruit for ages – I guess it’s unlikely I’ll ever get to drink it in Australia. After checking out, I left my bags at the hotel and decided to finally get a thai massage using some of the baht cash I still had left. Didn’t want to go the whole hog with a body one, so just went for a foot massage in the hotel spa. The lady wasn’t the greatest english speaker, but we chatted long enough for me to find out she was in Phuket for the Tsunami but was up on the hill at the time and was affected. She didn’t really talk much about it and honestly I don’t blame her. She just concentrated on giving me feet a workout and my mouth a cup of tea. A nice thing to do before getting on a plane for 9 hours and much more relaxing than the one I had in Hong Kong. 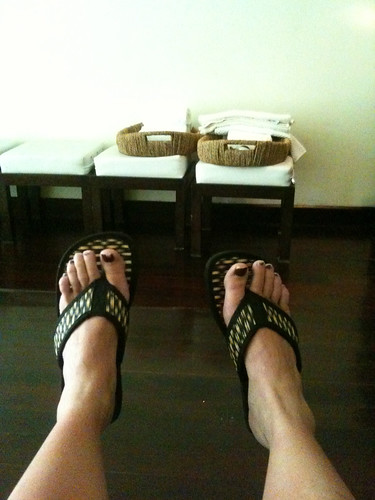 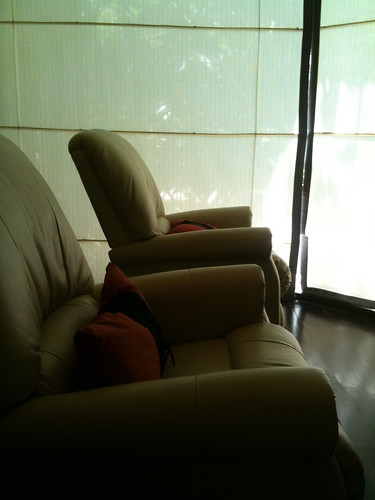 I still had a while to kill, so I just sat in the hotel airconditioned lounge watching people checking in and reading my book. Finally the mini bus arrived with a bunch of aussie girls and a few others. I kept my mouth shut because I like to listen to Australians as a passive observer. I overheard them saying they like going to pick up people at other hotels so they can see what the other places are like. Which I took to mean they loved my hotel which was ok, because I did too. One of them was feeling car sick in the back seat so she ended up laying down while the rest of them discussed some sort of intricate relationship drama one of them was having involving affairs and stuff. Very compelling.

Arrived really early at the airport – so early the counter hadn’t even opened. The Virgin Australia counters are in the other terminal and don’t have anything except for a small shop. I didn’t mind being early since I wanted to wrap my bag again since it had that rip in it, but no one was manning the wrap station. Asking the security guards about it they said that it doesn’t get down because they go through your luggage. I didn’t really understand cause I thought it would still be going through the x-ray, so why would they go through it? Had a long argument/discussion about it since I thought they didn’t understand what I was asking, but of course they knew what was going on – I found out once the gate was open. Stupidly, what happens is the customs officers go through your stuff at the table before you even go to check-in at the counter. Every person has to open their bags which is just a pain in the neck and so backward and stupid. But I was lucky enough to go first and eventually checked in. Virgin Australia were offering cheap upgrades to Premium Economy but flying by myself didn’t make it worth it. If I was with someone I probably would have done it.

After dumping my bags I headed up to the Irish pub in the other terminal because they had free wifi and I had a dell mini to google read with. Ordered a chicken stifry thing that was really fresh and great – surprised I could get something so tasty in an irish pub in an airport. The aussie girls I had mini bussed with ended up there too. Eventually it was time to go to the gate, so I wandered through a couple of x-ray machines in to the international section. It was utterly crowded with people everywhere and bunches of shops. I tried to find the place to collect my shopping tax exemption stuff but failed, so instead just sat around waiting. 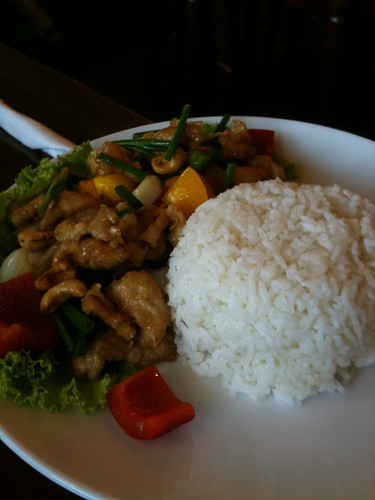 Finally they called the flight number and I headed to the gate. We had one final check of our carry-ons just before I got on the plane and of course this is where I encountered an issue. I was carrying a scooter helmet from Vietnam which was somehow dangerous, so they had to check it in as a separate item at the last minute. Found this extremely annoying after all the checks I had gone through already – you’d think they would have said something at the other 2 bag checks. I thought I was going to have to go without so I was glad they didn’t confiscate it. 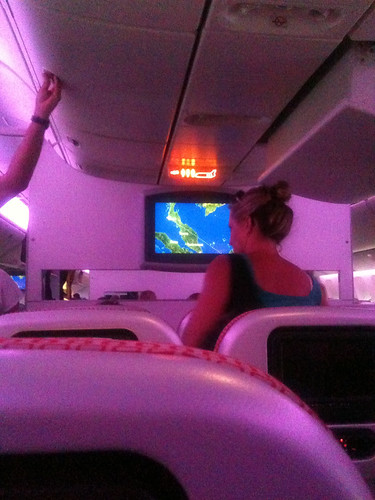 Didn’t sleep at all on the flight, except for the middle of “Men who stare at goats” even though it was an overnight flight. When we arrived in Brisbane, I picked up some more booze, found my poor forlorn helmet and headed out the customs doors. Was pleased and excited to see Pauline’s big grin and gave her a big hug. So happy to be home.