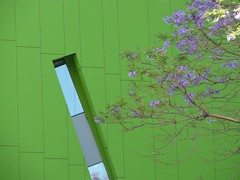 Yesterday, in a somewhat misguided attempt to earn some dosh to recover from the Hong Kong trip, I did some overtime work. The Brisbane City Council is moving from their current digs on 69 Ann Street to diagonally across the road to Brisbane Square (also known as Lego Building thanks to it’s colourful blocks at the bottom). Each weekend up to three floors get their stuff moved across and part of that requires their pcs to be set up in the new building with new printers and a general health check. I spent about 7 hours logging in to pcs, removing printers, checking they have internet access, checking the phone works and that their operating system is up to date. Doing the work reminded me why I left desktop support and it wasn’t helped by the fact that I still haven’t overcome my earache/sore throat that I’ve been battling most of the week. I got to sit at a lot of people’s desks and in the idle time waiting for logins to complete and printers to install I got to thinking about the way they had their desks set up and how I would set mine up. 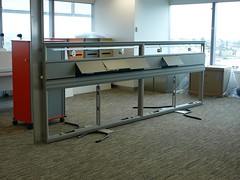 In the HR section (aka “touchy feelys”) most of their desks were set with them facing the incredible view. I interpreted it to mean that they are interested in the world outside and don’t have anything to hide due to the fact that they weren’t afraid to have their backs to the middle.

One section in HR though had their backs to the view, half of it obstructed by plants and the boss at the back able to see everything on everyone’s computer. It felt to me like they were all being watched.

In the finance section on another floor every single desk was in a position so that they couldn’t see the person next to them. Sitting there felt like they had lost any bit of lightness that this new building provided and to them it was all about secretiveness and silence. It makes sense seeming they are in a quite confidentional section of council, but to me it just looked like they all hated each other. 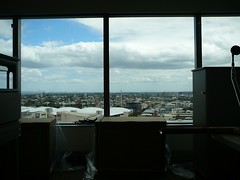 All these differences are what makes an open space arrangment interesting and over the next few weeks I’ll get to see people’s personalities come out in the way they set up their desks. This has made me think long and hard about how I want to be set up in my area but I won’t decide until next week when we get to set up. Originally when I walked in I wondered who would be silly enough to have the view to their back but after spending the day there I’m not so sure it’s that dumb an idea. You constantly have a view whenever you get up to walk around and it could be quite distracting. I am looking forward to watching the summer thunderstorms roll over the city.

There has been some bitching in the papers about the costs of this new building but they might change their tune when they see the cool library Council is fitting out. I think the new building is quite tastefully done in the way they’ve left the space open at the end of the mall and although the coloured blocks are in your face they are actually a quite interesting bit of architecture and make it a landmark. They’ve used the blocks in all their marketing material about the building which makes it immediately recognisable. Plus the blocks have been good for photographers. 😀