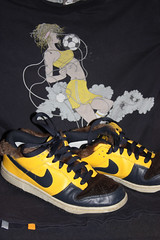 Favourite feature: They are a great winter warmer shoe thanks to the fur inside
Most wearable location: At night in winter.

Other people say: Do those shoes have fur on them???

What attracted me to the shoe: I had the mistaken idea that the LA Lakers Basketball Team wore yellow and blue (they are actually purple and yellow). I thought this could commemorate the fact that we had been to Los Angeles with a shoe that recognized the home team. Plus my sister was buying a pair of sneakers as well and I wanted some too! But really, it was that damn fur that sold it to me, it was just so unexpected. 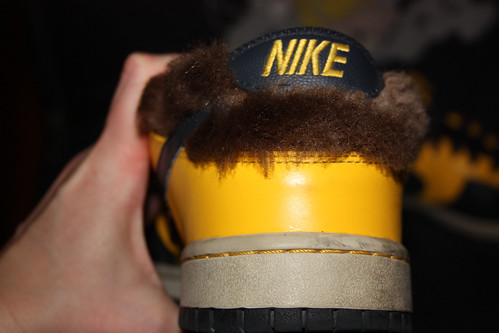 Today when I was researching them, I discovered something even cooler about them. There are actually only 72 pairs in the world and they were released as a media pack homage to Michael J Fox for the movie Teen Wolf. Now I have loved Teen Wolf all my life – watched it millions of times as a kid and was even the first to submit the “unzipped jeans blooper” to the fast rewind website. It’s like it was meant to be!

Why does the shirt match: The t-shirt is a nike shirt that was bought in an outlet store in Hong Kong near the airport. It’s a “collab” with an artist. It works obviously because of the blue and yellow, but I also have a Nike Air shirt that works too if this one isn’t available.

All this sounds great but what are they like to wear: Certainly can’t wear them in the summer time and if I walk long distances the fur starts to smell. I was wearing them when I had my scooter accident so they are now scuffed on the front right shoe (from when I went over the handlebars). I won’t be wearing them much if at all now that I now how rare they are – although the scuffing ruins their value enormously. But I am a huge fan of Dunk Lows, they are so comfy to wear. 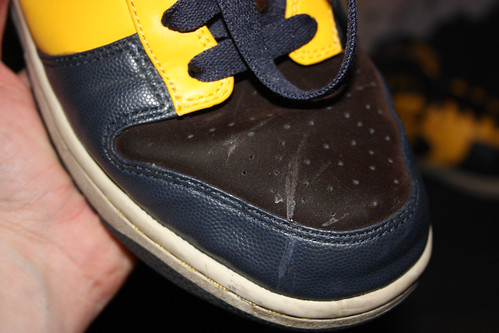