Originally the decision to fly to Canada hinged on the 2014 World Cup. If Claire and I (and Kelly) were successful in obtaining tickets to the Socceroos games at the World Cup then we would head to Brazil, otherwise we would fly to Canada to check in with Claire’s relatives in Toronto. Obviously we didn’t win in the draw, so Canada was our destination.

Secretly Claire had booked us Premium Economy tickets to JFK as a gift to me (I unknowingly just paid her the economy cost) and she tried to keep it a secret until the day of the flight, but the secret came out when I was checking our seats on the flight. It meant I had a couple of months to look forward to being on such a long flight with more luxury than cattle class.

We arrived at the airport early as we had some complementary Qantas club lounge tickets, so we spent a serene breakfast surfing the internet and enjoying the bircher muesli. If only waiting for flights was like this all the time. We had enjoyed the benefits of the quicker Premium Economy check in line to drop our bags off and happily used it again to board the plane. Immediately we were offered champagne, orange juice or water in an actual glass to sip on while everyone else boarded. It felt like stepping back in time to an era where plane flights were all glamour. While sipping on our water in a glass, we admired the leg and arm room our seats had afforded us. Most importantly for me, the bum space was also ample. 🙂 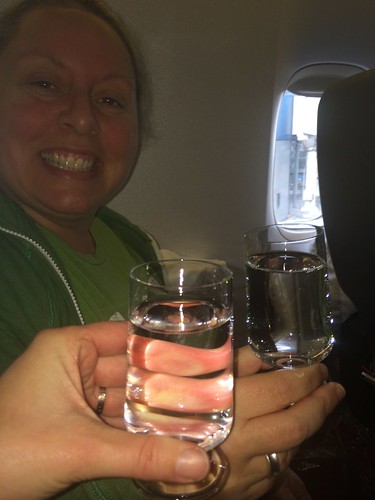 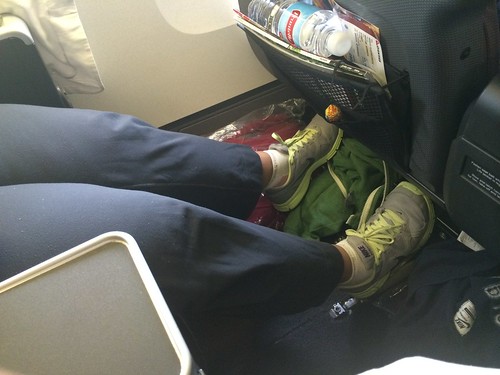 The first leg of the flight to LAX went by quickly and enjoyably, I settled in to watch the sweet Indian movie “The Lunchbox” while Claire didn’t really settle on any entertainment and instead enjoyed her Kindle and iphone music. Landing in LAX we were deposited at the newly upgraded Tom Bradley Terminal. Even though we were returning to the same plane we had to pick up our luggage and take it through customs to drop it off again in another baggage area. When we handed over our passports to the immigration guy Claire pointed out which passport was hers, I made the comment that I think he would figure that out from the picture. This actually made him laugh and we had an actual banter with him, which was such a departure from our usual experience with American airports. Unfortunately when we went to drop our bags off Claire realised she had left her boarding pass on the plane and they wouldn’t let her drop her bag off even though she had the original internet paper boarding pass. After dropping mine off we headed upstairs to get another boarding pass and bag drop which turned out to be surprisingly easy. 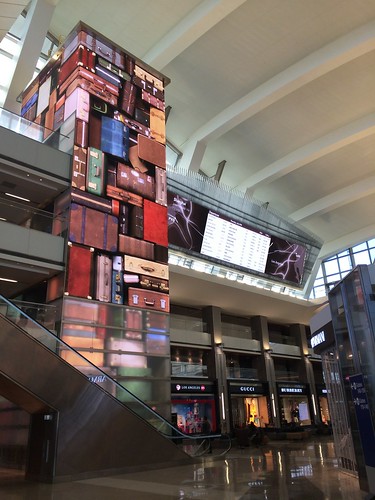 After going through yet another security screening we were able to wander the new terminal and admire all the shops (that were not yet open) and scope out where the Umami burger location was for our return flight. The new terminal is quite lovely, yet I’m surprised how little shops there are given that we are in the USA. After boarding the plane again for the next leg to JFK in New York City we ended up having to move seats after the takeoff as condensation dripped all over Claire’s seat and partially over mine. The new seats were still premium but with a better window view – half the cabin was empty as most people had left at LAX. Claire and I promptly fell asleep for the rest of the flight awaking in time to see the damage Hurricane Sandy had inflicted on Long Island – there were so many slabs where buildings used to be I lost count.

At JFK we had to wait an hour for the bags to come out – a tedious task in a totally ugly airport. I asked the luggage guy if this was normal and he informed me that this was a good day. I think JFK may now be my least favourite airport in the world now that LAX has improved it’s terminal.

We had to make our way to the other side of New York to New Jersey for a flight from Newark the next morning, so Claire had booked us a town car to drive what turned out to be nearly a two hour journey. When it turned up we felt like we were either in a Criminal Minds episode or had turned in to drug dealers  as the car was a huge Escalade. The driver knew some shortcuts and was happy to point out the sights of Manhattan as we went over the Williamsburg bridge, but we got stuck for quite some time in Nolita trying to get on to the Holland Tunnel given that it was now evening peak hour. This was ok with us as we got to a glimpse at the New York we would revisit at the end of the trip. 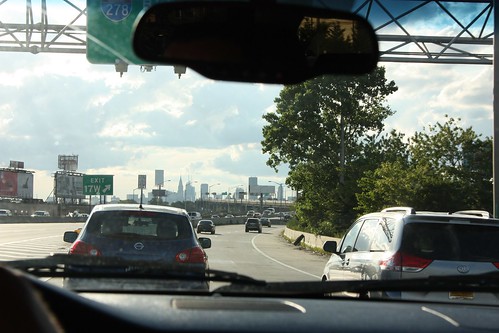 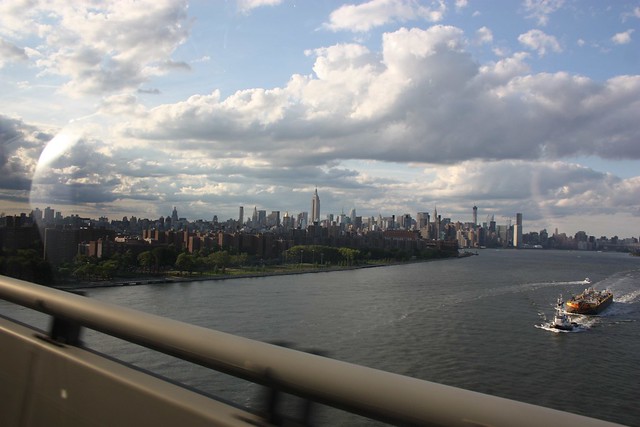 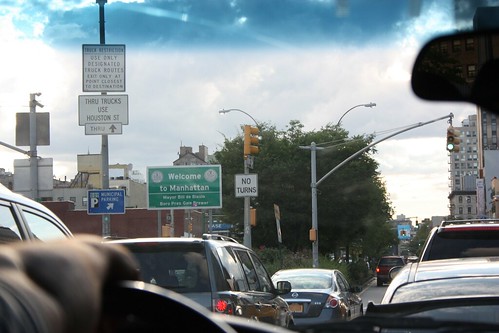 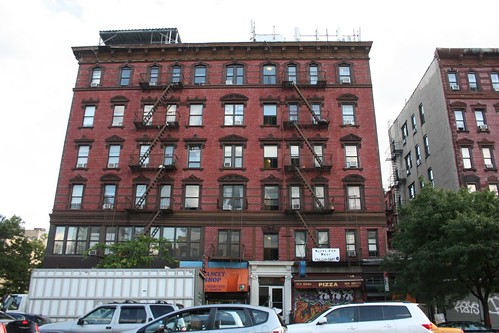 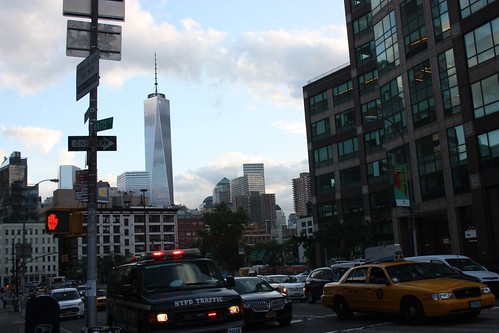 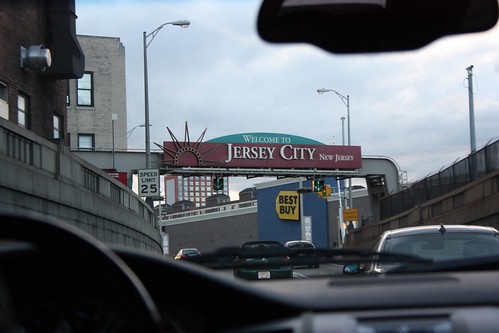 Arriving in New Jersey we checked in to the Springhill Suites which was right near the airport and offered a free transfer we would use the next morning. We were hungry by this point, so we walked over to the Courtyard hotel nearby (the only walkable choice for food) and shared a pastrami on rye with mountain dew to start the American food journey. Back at the room we showered, watched a little bit of tv then passed out after such a long trip. 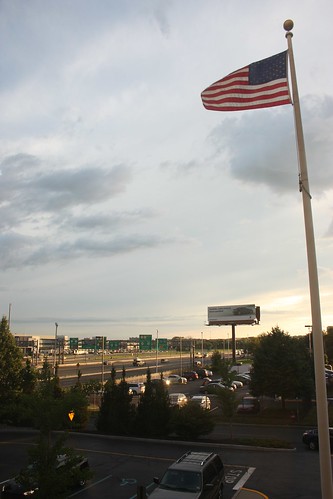 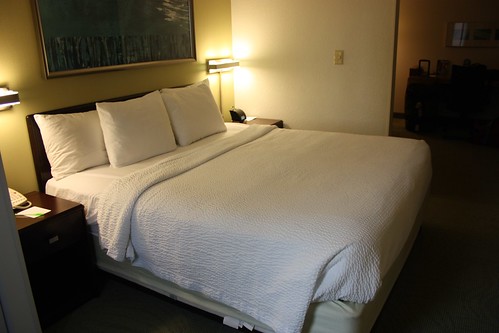 For more photos, check out the Canada and NYC photo set.