Up early to catch the airport shuttle to the Newark airport to be processed again by customs. We had a nice chat on the shuttle with some Americans who all agreed Quebec was a beautiful place and that Australia was a long way away.

We had left a lot of time to get through the security screenings but felt super sorry for the Indian family who were trying to make their connecting flight after their first flight was late. Unfortunately the X-ray machine broke down just as they reached it. We all had to shuffle backwards to the next machine but for once the TSA agent was lovely and made sure we all kept our places in the line. She also handled us with humour and kindness. Somehow Claire got the magic pass that allowed her to keep her shoes on. I was super jealous.

On air side I had the first shitty coffee of the holiday (not the last) and Claire and I shared a NY bagel that I was not a fan of. I was interested to see how it would go against a Montreal bagel. Newark airport seemed a bit nicer than JFK. 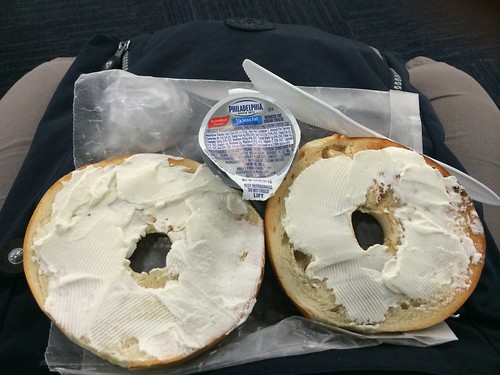 After we boarded the plane which had the 1-2 seating configuration we had to wait as the control tower had somehow gotten our flight departure time wrong. In the meantime we watched this kickass black lady push out planes and generally handle shit at her gate. She was awesome. Eventually we took off and the flight provided us an amazing view of Manhattan and the Statue of Liberty. It was a complete difference to Quebec which was full of low level houses each with their own perfectly round above ground pool – so many that both the people in front and behind us commented as well. But I think both NYC and Quebec have about the same amount of water.

Quebec airport was such a relief after the horrible American airports. It was modern, clean, fast and quiet. We were almost first through immigration and waited about 5 minutes for our bags. I couldn’t help but exclaim that I loved Canada already. Even though we knew they spoke French in Quebec it hadn’t occurred to us that all the signs and everything would be in French. We caught a cab to our hotel and gawked at the mismatch of architecture.

The freeways and main roads didn’t offer much beauty, but suddenly the cab turned left and drove us up a hill depositing us on the cobblestones in front of the Fairmont Chateau Frontenac – our hotel for the next few days. Suddenly we were in another world of horse drawn carriages, furnicular railways and poutine. The chateau Frontenac is an iconic hotel that overlooks the St Lawrence river and is the most photographed hotel in the world for good reason. I had seen this hotel for the first time in the Angelina Jolie movie “Taking Lives” and it was on my bucket list to stay there. 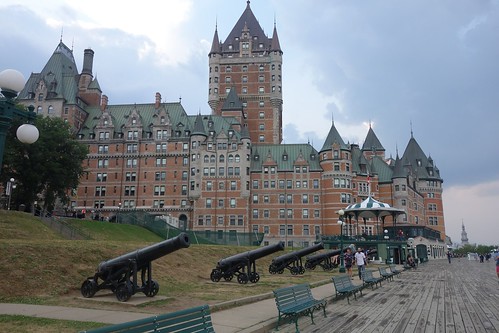 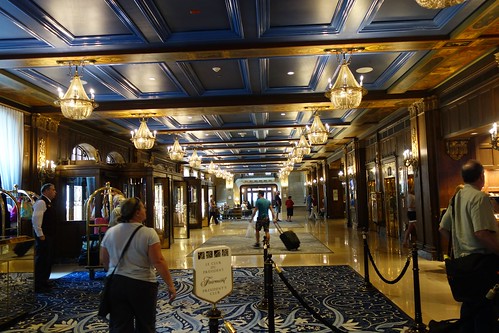 Entering the old fashioned but beautiful lobby we checked in to our room, stopping to take photos of the elevator on the way. Claire had gotten us a deal on the room so we didn’t expect it to be amazing but we really liked it. It was small with a slanted ceiling and a view of the turrets – quaint and cute but with a great bathroom and good products. 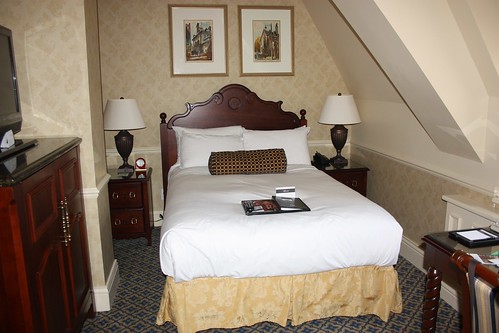 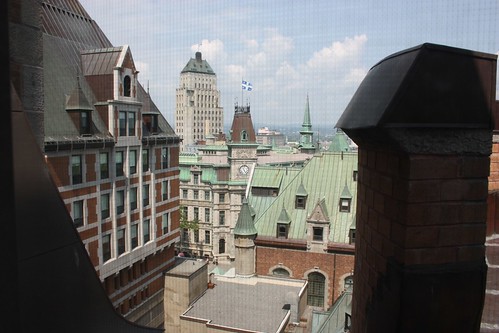 We dropped our bags and then set off to explore the area. The tourist area is pretty much everything around the hotel – there were so many photo opportunities and cute shops. We explored the Roots store which is kind of like the Canadian Gap and found lots to buy. We stopped in Cafe Buade for our first taste of poutine and it was as delicious as I imagined. Fries smothered in gravy and cheese curds kind of like a fresh mozzarella just cannot be wrong. 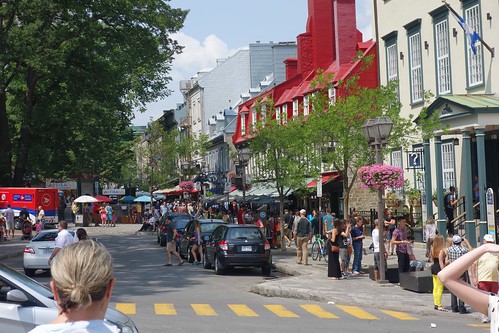 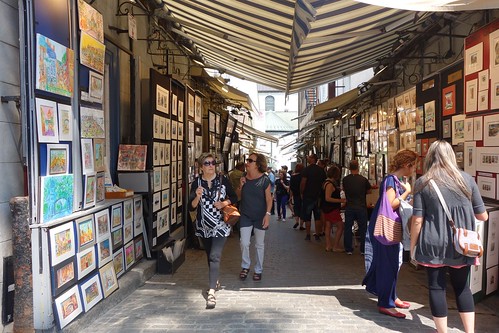 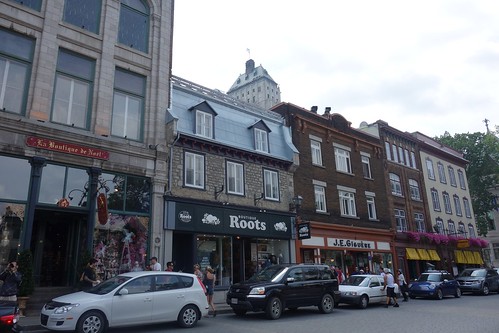 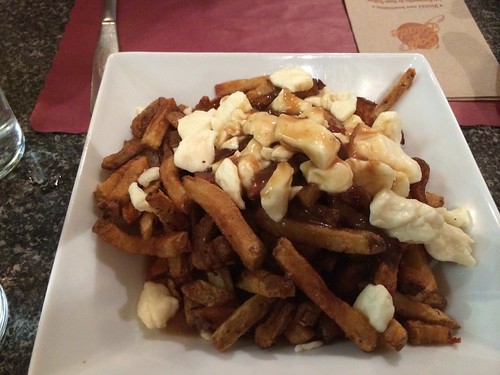 After the exploration we headed back to the hotel for a nap as jet lag was starting to hit. It must have hit badly as we slept for about 3 hours. It was almost dark when we emerged to ride the furnicular down to the old town. Cobblestones, a touch of rain and lights made it very romantic and atmospheric. I found it to be much more romantic than France albeit it’s not quite the same size. We decided to try Cochon Dingue for dinner as fourquare had recommended their Maple Glazed ribs and sugar pie. Four square was not wrong at all – it was the most delicious meal we ate on the entire trip. Every other rib and pie we ate was compared to this and failed. We sat out on the street and watched the ghost tour and tourist buses go past while we dined. 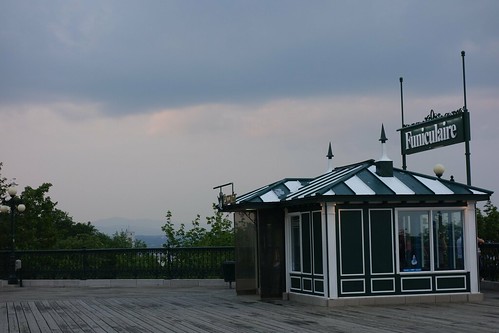 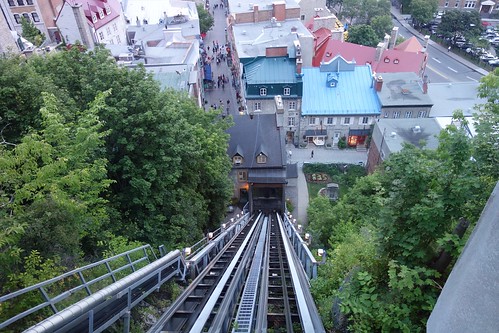 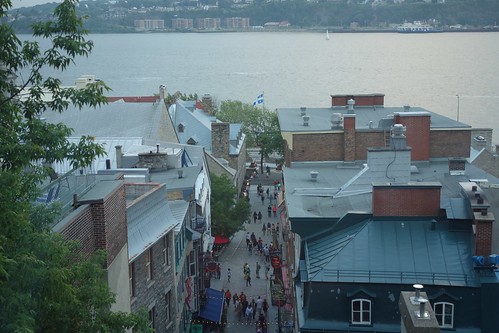 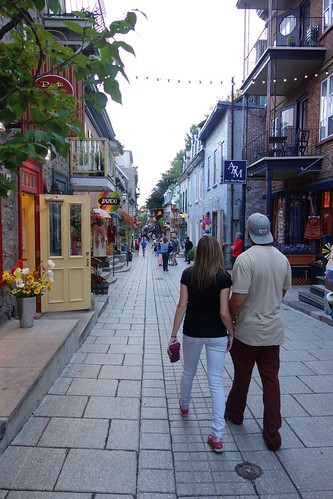 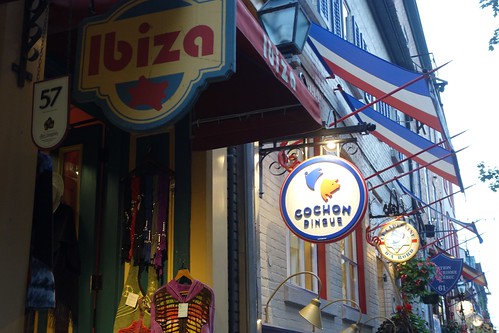 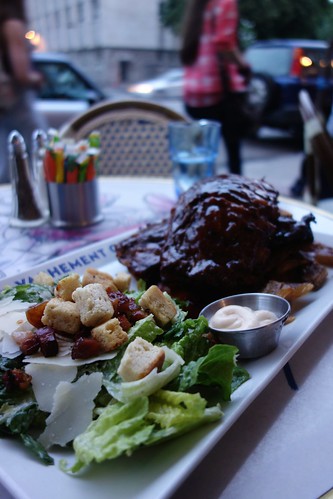 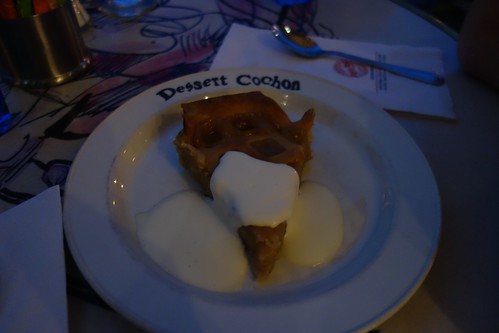 After dinner we wandered back up the steep hill stopping to admire Notre dame des Victories and the Plaza Royale. Every corner we turned brought another beautiful sight, whether it was a church or a building with art on the walls. The return walk up the hill worked our cardio and then we went back to the hotel to discover our new favourite television channel hgtv – a home improvement channel that had a lot of Canadian shows. Sleeping in the afternoon turned out to be a bad idea as we both woke at 3am and had to read for an hour or so to get back to sleep. 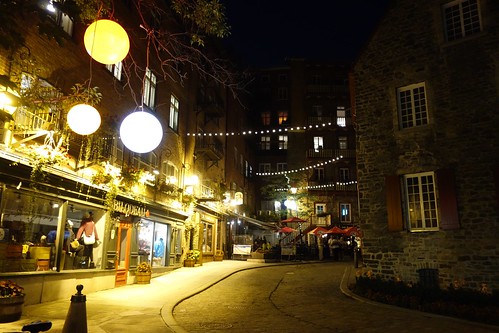 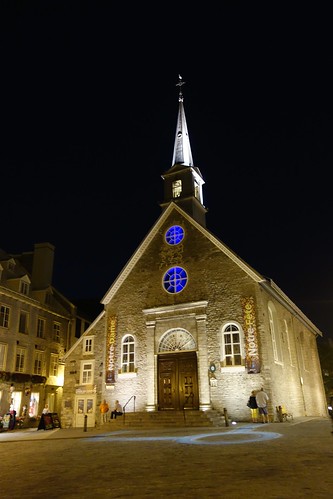 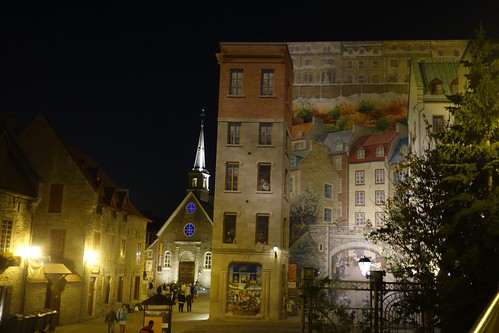 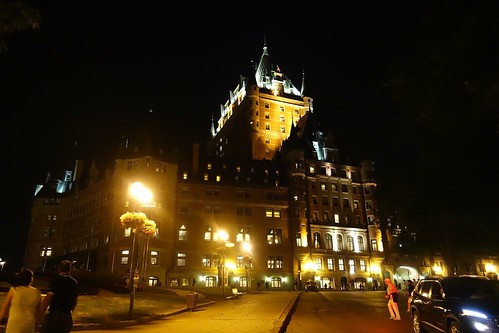 For more photos, check out the Quebec City Photo Album on Flickr.