Jet lag had made us get up early so we were out and about searching for breakfast. We wandered a couple of backstreets, coming across yet another church, before settling on Le Petit Château – a cafe beside Château Frontenac. The guy seated us outside, but given it was pretty cold in the shade we opted to go inside after ordering. I went for blueberry crepes, while Claire went for the american version of crepes what we know as pancakes but in french it is Crepe Americain. I don’t know why they don’t just call it big fat crepe. Both meals weren’t anything special, but the fed the hungry belly and my morning needs were attended to with frequent if not acceptable to an Australian coffee. 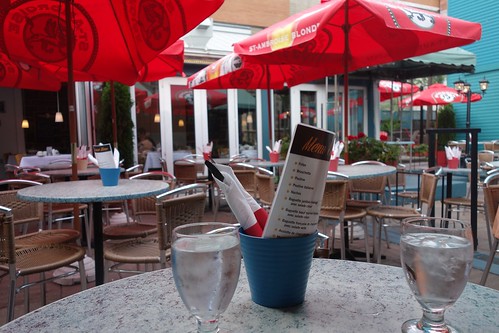 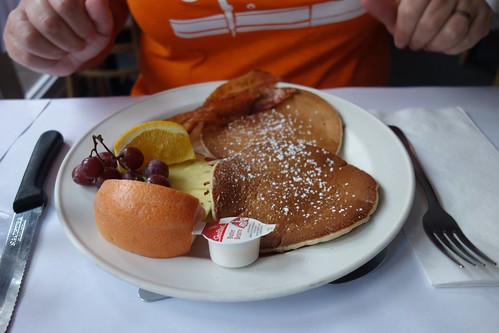 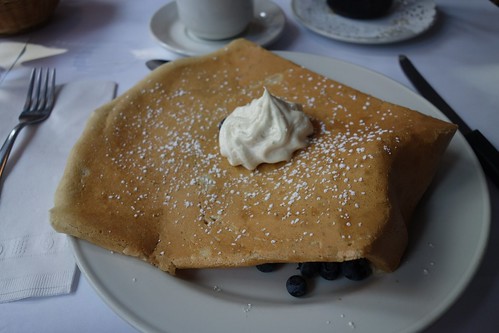 We realised that the Citadelle opened at 9am and decided that we would try to do a tour of the grounds hoping that it finished in time for the Changing of the Guard at 10am. Quebec is the only fortified city in North America and the entrance to the Citadelle is near one of the gates. We walked huffing and puffing up the hill and arrived just in time to see the two guards in the front performing a change over. In Australia it would be all G’day mate, I’m here, high five each other and swap. Canada has adopted the stuffy british approach of lots of grunting, marching and precision stepping. It shows discipline I guess. 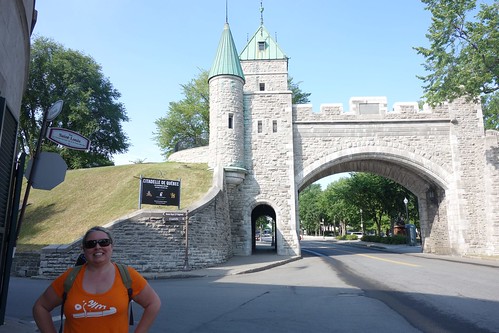 The tour was starting in 5 minutes after we bought our tickets, so we checked out the shop, coveting some wooden practise guns that we could never take back to Australia, took some photos of us with a fake picture of Batisse the Royal Goat and then admired some of the soldiers performing some routines on the grounds. 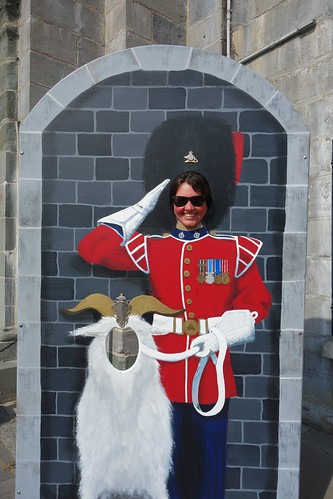 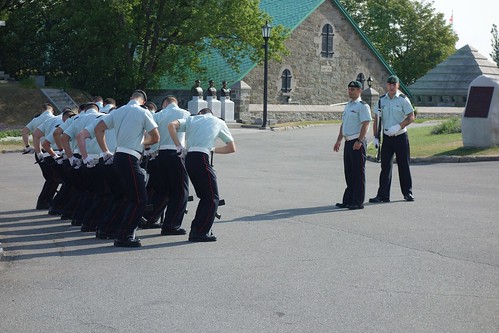 The tour guide was a female french Canadian who was a really good tour guide. She showed us the barracks where the guards live, the mess hall, the armoury that is now a museum, some tanks and guns – painted in colours meant to represent if they were caught in the war and brought back to Canada or if they were original weapons. We walked up to the top of the Citadelle for views of the entire star shaped complex, then walked to the other side to take photos yet again of the iconic Château Frontenac and St Lawrence River. Our tour guide found it so important to tell us “It was always a hotel – never a castle” that she mentioned it multiple times. The way she said it amused us so much that we reused this saying everywhere we went for the rest of the holiday. By then it was time for the Changing of the Guard in the middle of the Citadelle. 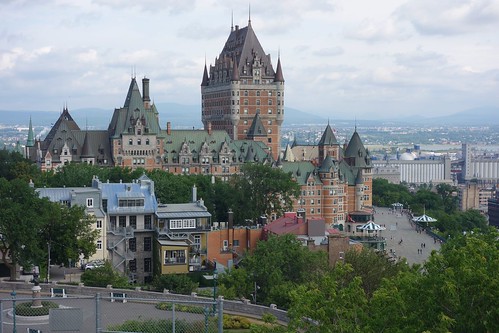 It is quite an odd experience as an Australian who has lived in the UK to see something as British as Royal Guards in Busby’s shouting commands in French in North America. It’s quite a magnificent sight to see the bright red, the perfectly polished shoes and the black pants against the backdropped beauty of the Château. It starts with a trumpeter and then proceeds to lots of marching by soldiers, a band marching and most amusingly a goat marching. The goat (called Batisse) was given to the Royal Guard by Queen Elizabeth in 1955 and has marched ever since (of course the one we saw wasn’t the original gift but a descendant). There are announcements over a loud speaker to explain what was going on, but I found it quite difficult to hear. We got a good 35 minutes of marching which we enjoyed. 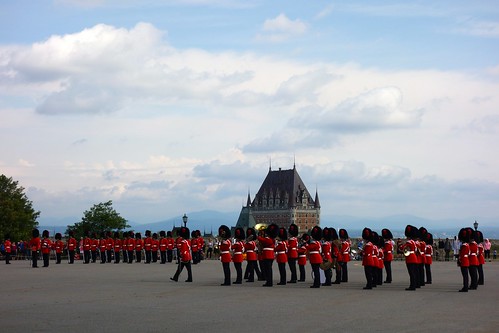 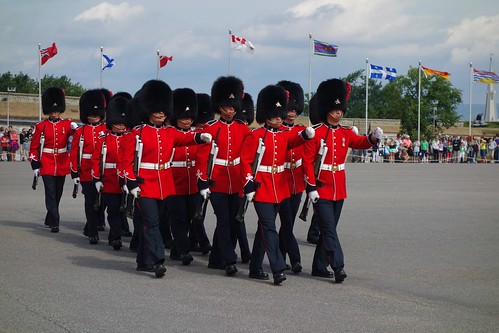 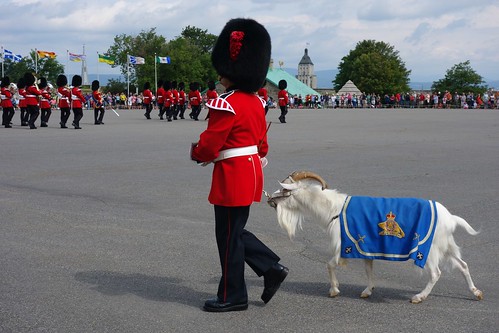 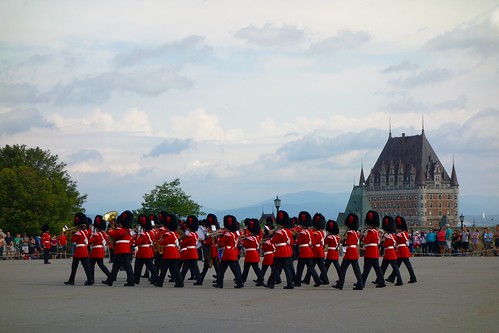 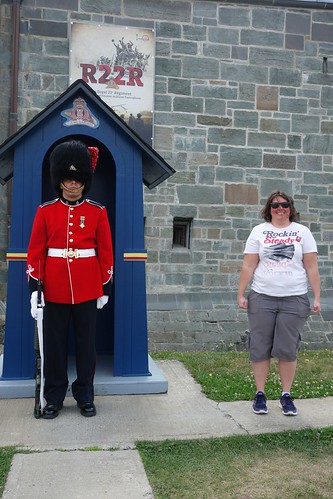 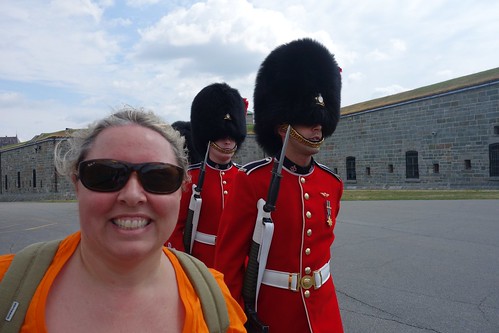 Once we had finished at the Citadelle we walked around the town again and stopped for lunch at the Chic Shack. Poutine was the only thing we had eyes for, so decided to try what they called the 2.0 version – La Fumee, which contained Smoked meat, Chic Sauce, cheese curds, Swiss cheese, pickled onions and fresh herbs. Of course, the perfect drink match for something that “healthy” is to select a Salted Maple Caramel milkshake which was delicious. We sat outside in the sun on the square and watched busloads of tourists wander around trying to pick where they were from. 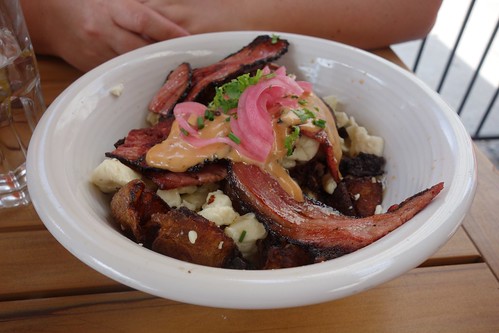 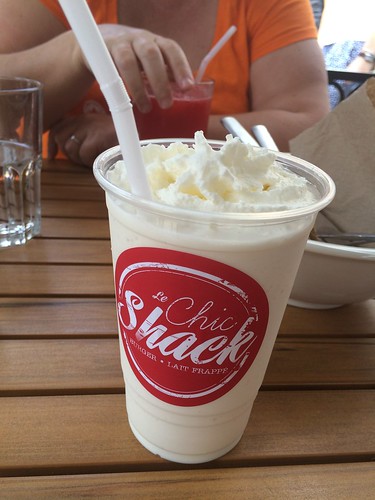 By this point we were utterly knackered physical and jet lag wise so ended up sleeping for quite a few hours. It was raining when we got up, which was a really atmospheric view from our hotel (never a castle) turrets. We decided to go hunting for dinner down in the lower old town area, so walked down the hill instead of taking the funicular. It’s hard to go anywhere in Quebec City without taking photos of the Château and this walk was no different. We had a bit of trouble deciding what to have for dinner – all I knew was that I needed some vegetables to circumvent the amount of poutine we were eating. We had a bit of fun playing in the street art around the town, but couldn’t find anything that took our fancy. In desperation to escape the rain that was about to pelt down, we decided on Thai at a restaurant called Asia. The meal was acceptable, the decor ok, but it all felt much better when we got the last seats and were able to escape the rain while they turned away others at the door. By the time we had finished the rain was still drizzling, but we decided we had enough space in our bellies to try dessert. 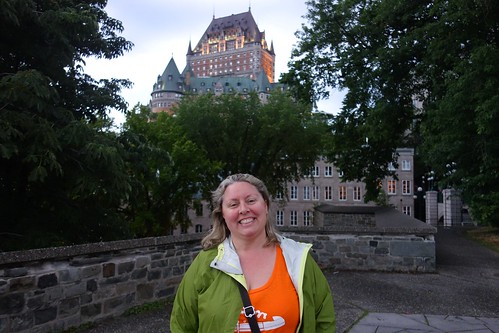 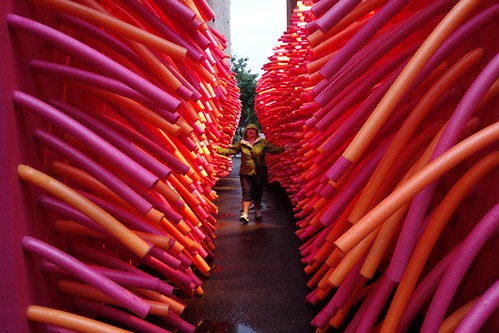 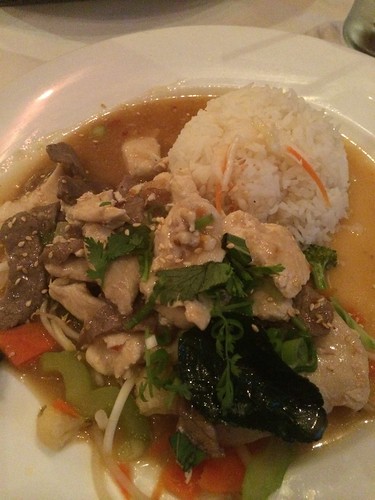 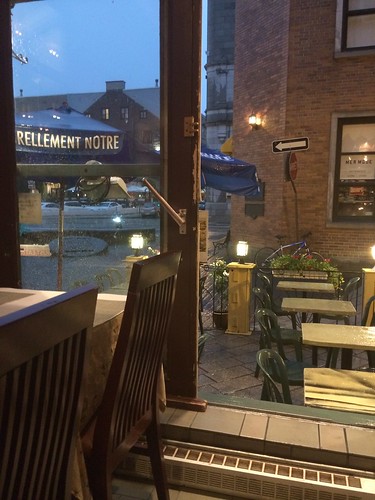 I had read about Beavertails being a delicacy in Quebec and was eager to try it. Unlike it’s name it is actually kind of like a light flat long doughnut covered in a topping of your choosing – whether that be Nuttella, Maple Syrup or just cinnamon sugar with lemon. Claire ordered our maple flavoured version while I got us a spot upstairs. We had decided to share one, thinking it would be really heavy and filling, but it was actually really light and easy to eat. IT WAS AMAZING. Beavertails should be franchised all over the world. 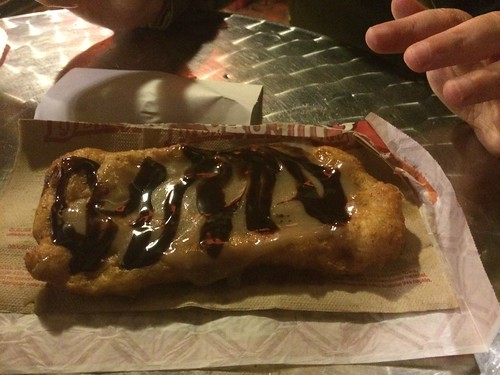 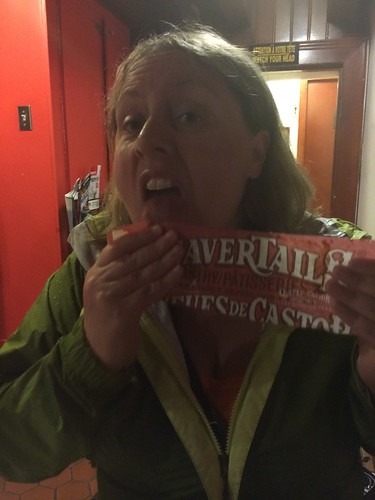 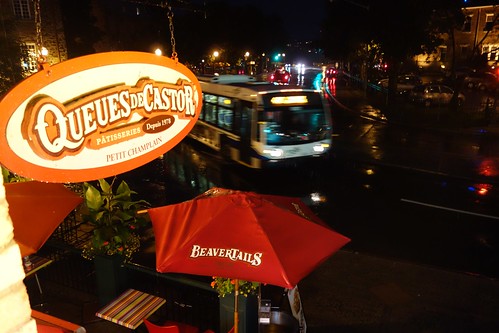 Afterwards we dragged our wet asses to the funicular to catch a ride up to the top and our hotel, then it was back for a bath and sleep. 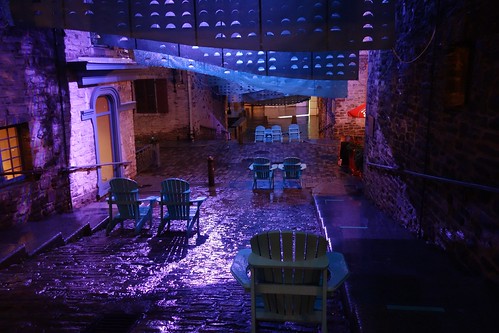 For more photos, check out the Quebec City photo set on Flickr.