Another awesome continental breakfast at Le Petit Montreal and then we checked out of the hotel, making use of the valet option given that it is so expensive in Australia and a real treat for us. Claire and I don’t really travel well together in cars, primarily because we are both backseat drivers to each other, which doesn’t make for fun. Given that it’s our only real relationship issue and it’s minor, I’m totally fine with it. But over time we’ve learnt the triggers and try to avoid them, so we decided I would drive us out of the city and then hand over the keys to Claire.

It was pouring with rain and a fair bit of construction, but given that it was peak hour and we were leaving a major city, the traffic wasn’t too bad and before we knew it we were on the freeway. Our first destination was a sugar shack set up for tourism. A sugar shack used to be the place where they tapped the maple trees to get the maple sugar to make maple syrup, but these days they are also a tourist destination with cabins, shops and reception halls that serve good hearty canadian food for lunch and dinner. Sucerie De La Montagne was on our way to Ottawa so we decided to stop off and learn something about Maple Syrup and maybe trying some maple toffee in ice. Unfortunately when we arrived it looked deserted and our walk around didn’t turn up anyone. We wandered around taking photos and had a quick look in the reception hall and shop, but left after 10 minutes disappointed. I guess this place is busier at lunch time and christmas rather than 10am in the morning. I handed the keys over to Claire and she finally got to drive the car (admirably I might add). 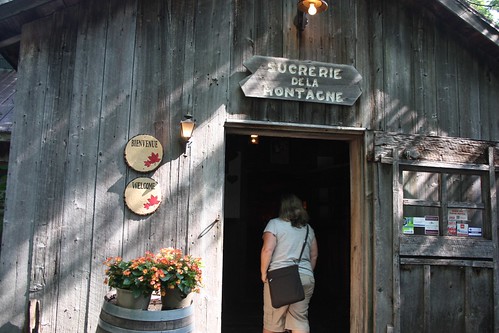 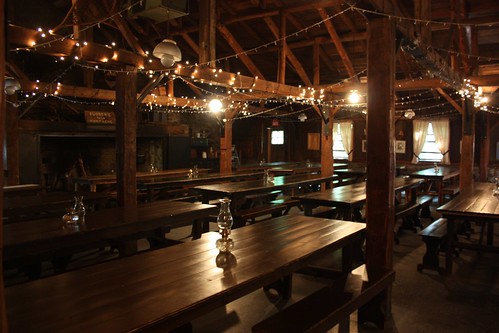 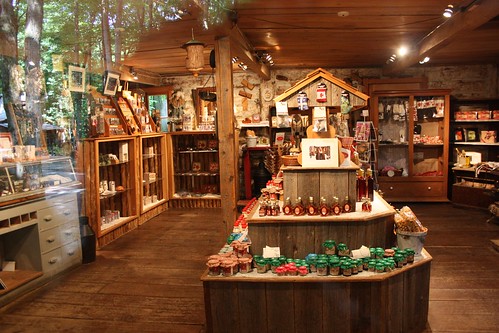 Claire drove us to Parc Omega – a tourist attraction 45 minutes from Ottawa and an hour and a half from Montreal. It’s basically a huge park full of animals walking free and you drive you car past them and feed them. It’s mainly deer and moose that walk up for the food, but you can also see bison, bears, boars and wolves as well as a whole bunch of small cute animals like chipmunks. The line up to drive in is quite long but it moves quickly and once you’ve paid and are inside, you can stop to buy some carrots in the Park House, pose for a quick photo in front then drive off in to park. 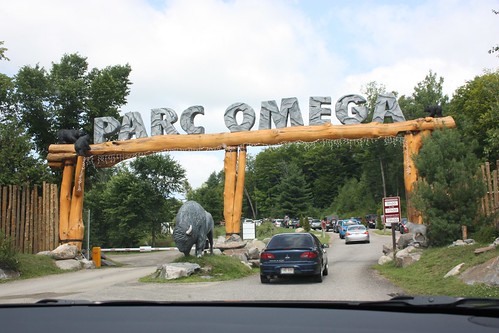 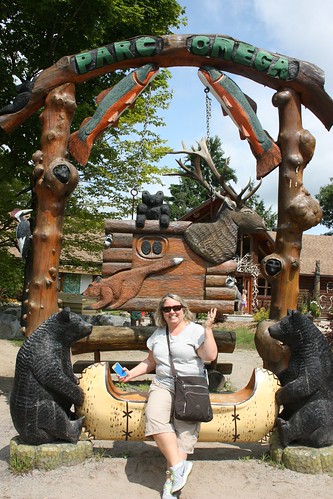 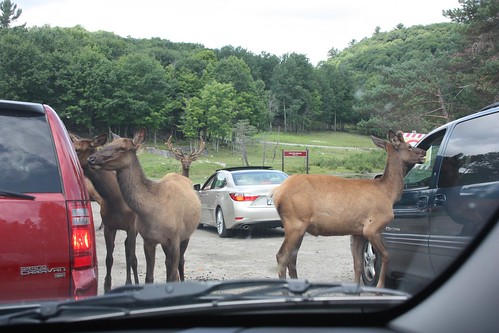 Most of the animals are pretty tame and walk up to the car for the carrots (you aren’t allowed to feed them anything else), but you have to be careful how you feed them or you’ll end up with moose mouth juice sliding down your arm like I had. The park has a radio station broadcasting that you can tune to and learn about the animals and the park. We had a great couple of hours inching around talking to Bambi and friends and it also helped Claire become familiar with the car. 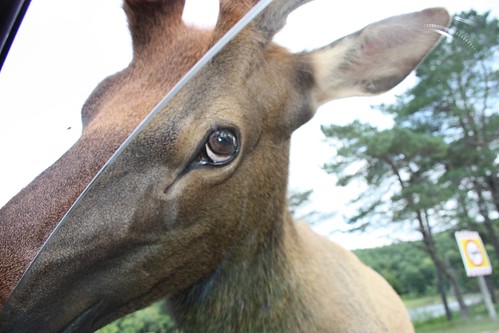 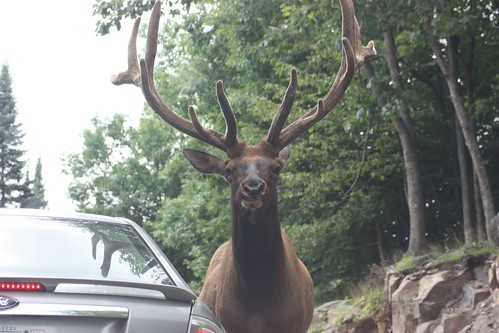 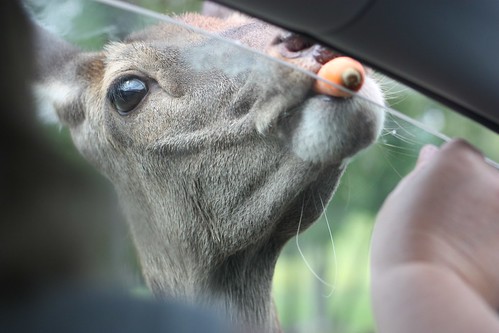 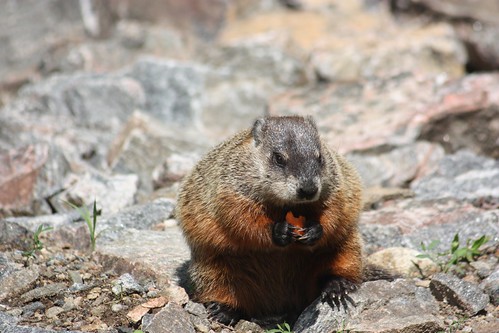 We made it to Ottawa by 3pm and after overcoming an issue getting to the carpark, we were checked in to our least fancy hotel on the entire trip. Given that we were only spending one night in Ottawa we went for an inexpensive chain hotel option that was in a useful location – clean enough to sleep in, but designed more for business overnighters than boutique holidayers. Unfortunately one of the lifts was being serviced during our stay, so we took the stairs most of the time when we weren’t pushing our huge bags. After dumping said bags in the room we headed out to explore what Ottawa had to offer. 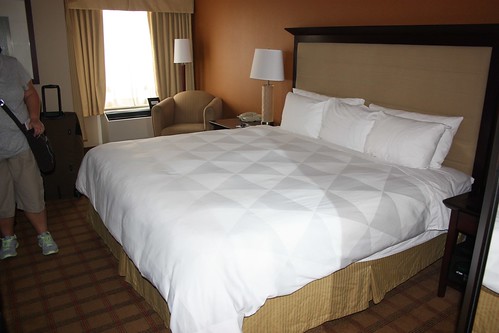 When Claire was discussing the trip with her canadian facebook friends, a lot of them said to not bother with Ottawa as it wasn’t that interesting. Given that it’s the capital city and we were driving past we decided we would give it a day and then continue on. We hadn’t really planned anything, so headed for Parliament Hill which was just down the road from our hotel to see if we could get on the free tour. Unfortunately we were too late as they had all been booked, so after wandering around and taking some photos, we continued on, deciding to come back later for the 10pm light show. 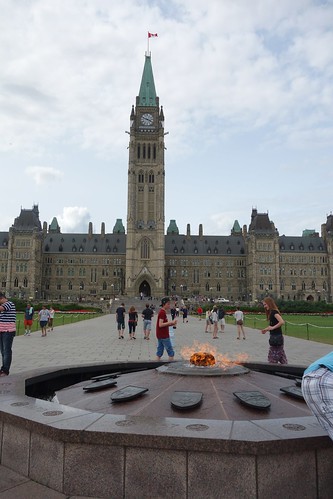 We admired Fairmont Chateau Laurier which is kind of like the sister to the Chateau Frontenac Hotel we stayed in Quebec and built right near the train station. We then walked a few more minutes to the Byward Market to the Sidedoor restaurant for some lunch/dinner. Claire and I are fans of the Canadian Top Chef and I had learnt that Jonathan Korecki was the chef at the restaurant, so it was high on my list of places to visit. We indulged in fancy tacos, beef san choi bau and some greens as well as delicious cocktails. It was nice to sit outside in a square with the sun shining eating fresh and tasty food. 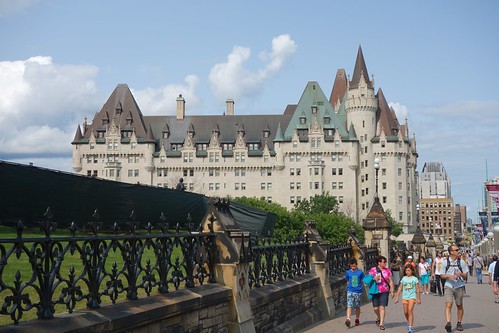 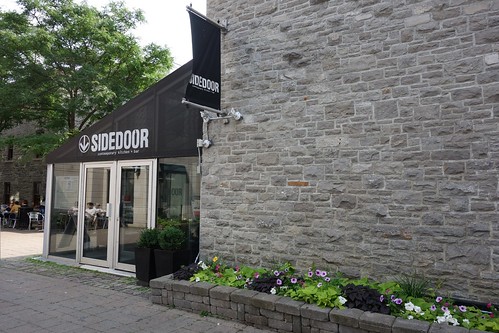 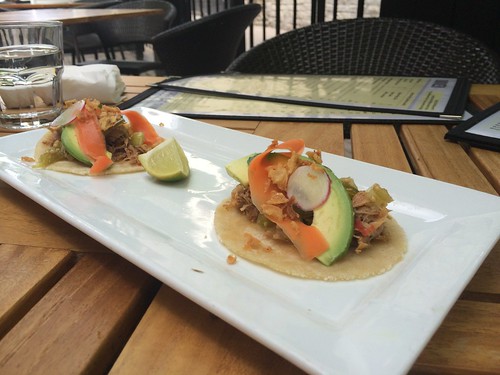 After finishing our meal we wandered around what was left of the Byward Market which was closing up at that time of day, but we managed to see lots of fruit and vegetables, some maple syrup stands as well as a wine store that served ice wine – a sweet wine made from frozen grapes that Claire is partial to. We listened to a street band play some great music then ate another beavertail (one each this time). So far Ottawa was lovely and we were really enjoying our afternoon – especially as we were just seeing where things took us. After spending a bit of time in the Eaton Centre (and bought more stuff from Roots) we decided to book a Ghost Tour of Ottawa that would start at 8pm. We sat around on some deck chairs waiting as we decided it was too far to walk back to drop off our stuff in the room in the time frame. 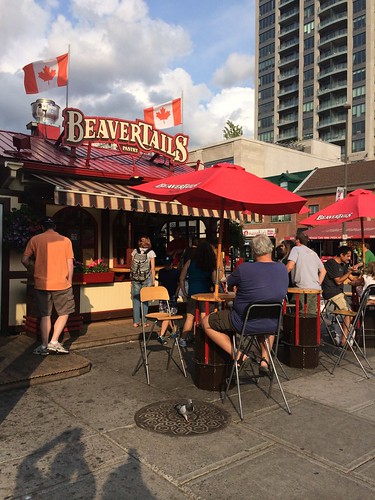 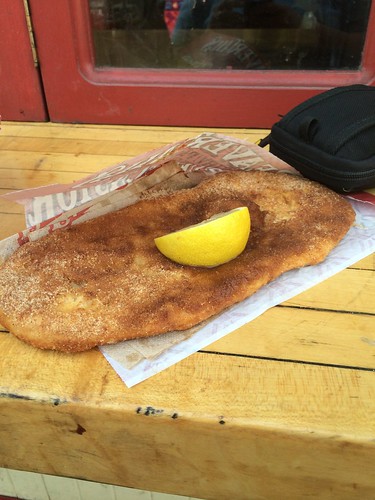 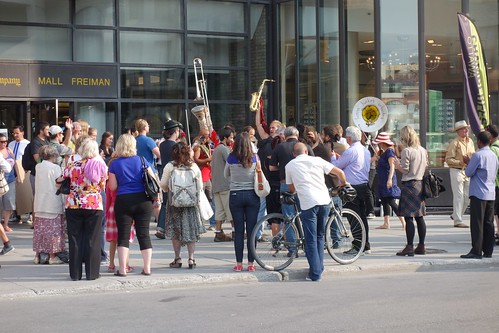 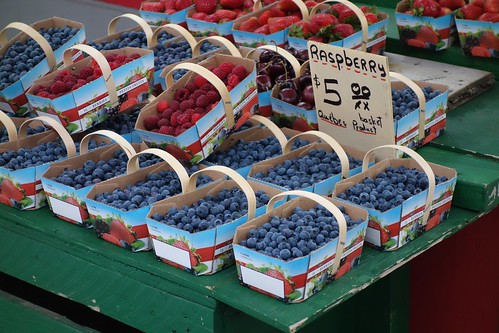 Our Ghost Tour Guide was a redhead who was a great storyteller. She took us around some back areas of town, stopping near schools and old houses to tell us ghostly stories, which weren’t too amazing in terms of ghost stories, but it’s a nice way to learn about the city and get new views of the town. I enjoyed a story about a woman who supposedly drowned but haunted an area for a long time until she was able to tell the person that it was actually her husband who drowned her. It was a cool touch when we were told a story under a bridge that suddenly had red flashing lights spinning around – but it turned out to be just some people doing a bit of fire twirling. 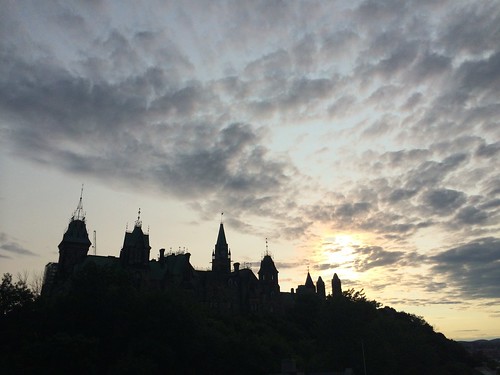 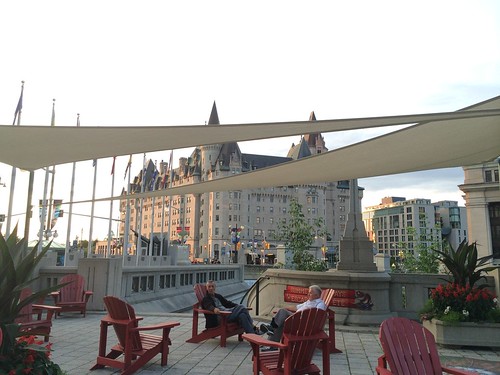 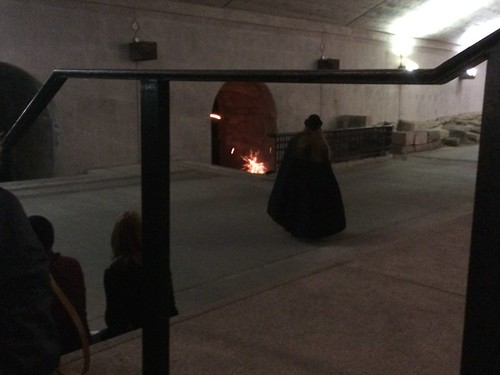 After the tour we headed back to the Parliament buildings and got a good seat for the show. A girl who had just moved to the city was walking past and decided to sit down and find out what was going on, so we had a nice chat given that she had lived in Australia for a while. The show was really good – it was a whole bunch of projections on the main building that told the history of Canada – very comprehensive given that it included Bryan Adams and even Tegan and Sara. 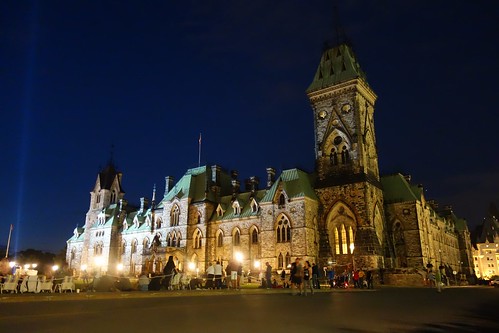 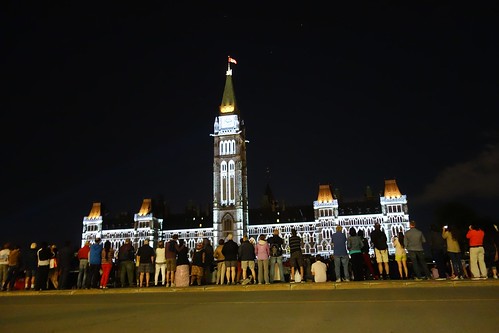 Afterwards we trudged back to the room freezing as we hadn’t dressed for night time and immediately fell asleep.

For more photos, check out the Ottawa Flickr Photo Set.