Le Petit Hotel in Montreal does a fantastic continental breakfast under the watchful eye of some fantastic artwork. They are known for doing a good coffee in Montreal and were willing to try making a flat white for me. I was so pleased to get a coffee worthy of the name, but it was actually the montreal bagels that were the treat. I have never really seen the attraction to bagels, but after tasting one that was so fresh, soft and tasty after the rock bagels I’ve been exposed to in the past, I became a fully fledged bagel fan. Montreal Bagels kick NYC bagels butt! The breakfast had everything you’d need if you are looking for a light non hot meal. Fruit salad, yoghurt, bagels, toast, croissants, chocolate croissants, cereals, muffins, tea and coffee. It was really simple, but really tasty. 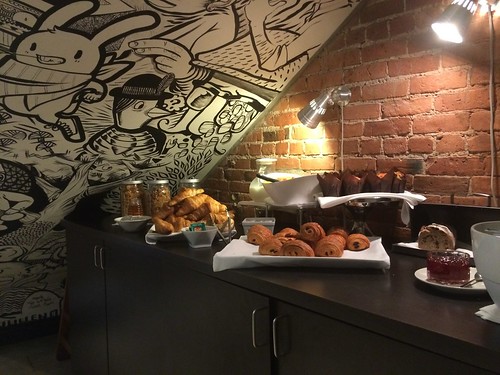 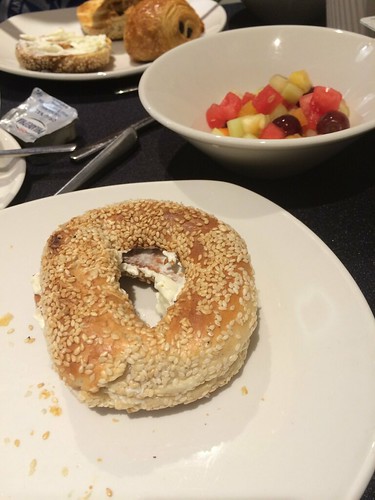 We knew that it was going to rain in the afternoon, so we decided to do some outdoor walking along the old port near the clock tower before we would head for the underground city when the weather was against us. We wandered along Rue De La Commune, then down to the Promenade du Vieux-Port and finally Clock Tower Quay Street. The day before we had noticed that the area was packed with people, music and food carts, but on a rainy monday morning, the only people around were workers and homeless people. 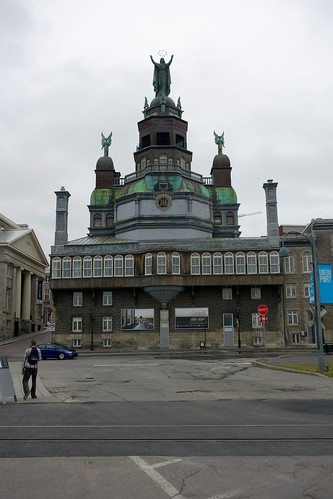 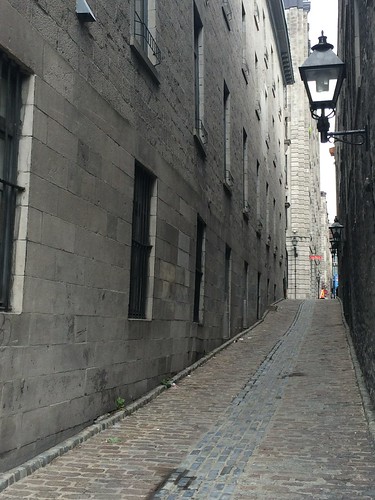 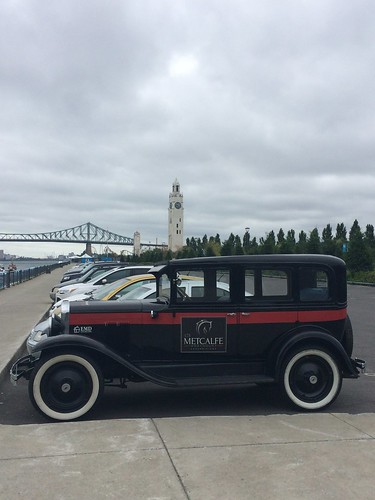 We had toyed with the idea of riding bicycles, but neither of us was brave enough to do it without helmets – we are too clumsy and have been too conditioned by the Australian government in head injuries. Instead we pretended what would happen if we didn’t wear helmets. 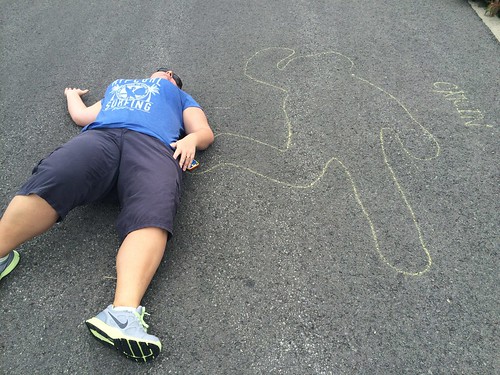 We eventually ended up at the Clock Tower, which in the summer has a pop up beach. This would have been awesome to chill and have a drink in warmer weather, but it was deserted like the boys of summer had gone. Claire and I discussed how we now understood how Jeff Buckley could have died in the Mississippi River after seeing the currents of the St Lawrence River – powerful and in every direction. 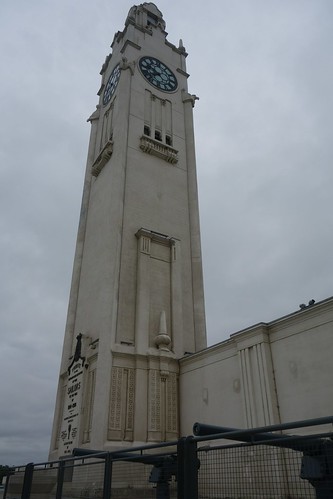 We headed back towards Notre Dame Basilica where we were amused by some of the statues, then headed down to Station Place D’Armes to find the underground city. In the winter Canada obviously becomes a big white wonderland and the amount of snow dumped makes it less enjoyable to walk around. The underground city is a series of underground walkways that join buildings, train stations, hotels and shops to allow people to get around without a big coat. My choice of entrance location turned out to be a bit stupid in that there wasn’t really much to see even after walking 30 minutes. 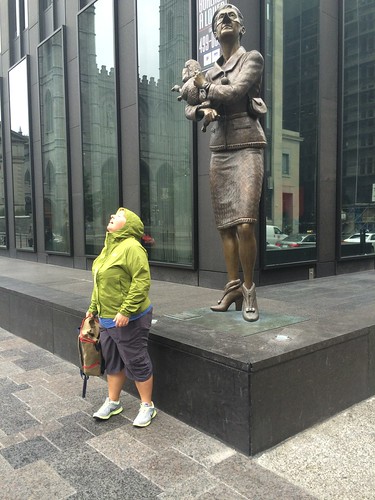 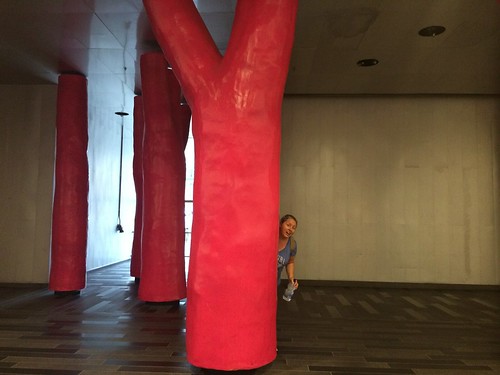 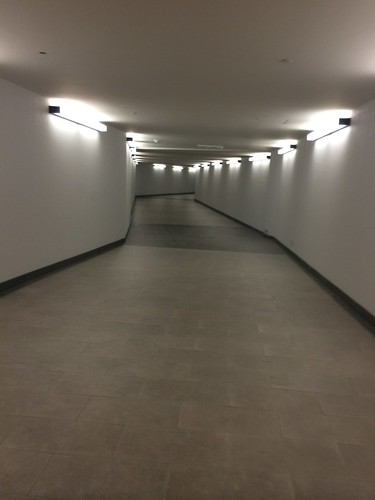 Finally we started to see some shops and after almost reaching hangry status in the Eaton Centre we bought some hot dogs and poutine, cause we are in North America Eh! 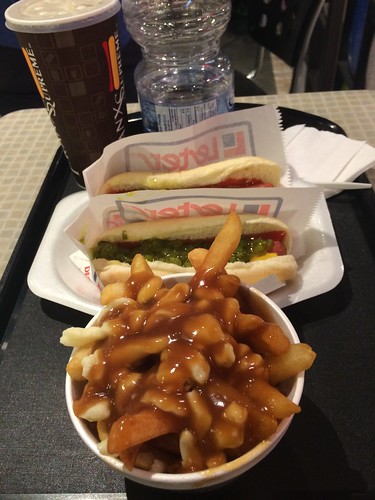 Claire went to town shopping in  Old Navy and we braved the now rainy street of Saint Catherine to check out the Roots and Adidas stores before catching a train to Place-Des-Arts, to then catch a bus to St-Viateur Bagels out in the suburbs. It is the original bakery in a multi cultural neighbourhood and even though it took us 20 minutes to get there in a fogged up bus with no view and we only spent 5 minutes there, I really enjoyed seeing the bagels being made and coming fresh out of the oven. We bought 4 bagels of all different types as well as a big carton of local cream cheese, then headed back out in the rain to take a different bus all the way back to near our hotel. The great thing about Montreal transport is that they allow transfers, so it really only cost us about $6 to do the whole trip including the train ride. 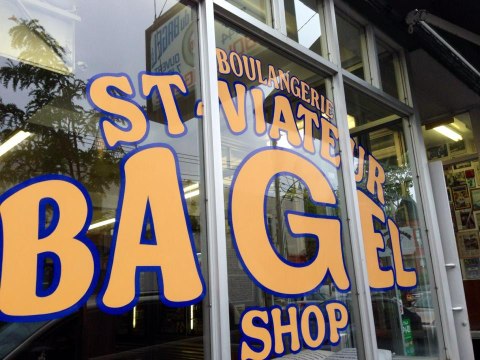 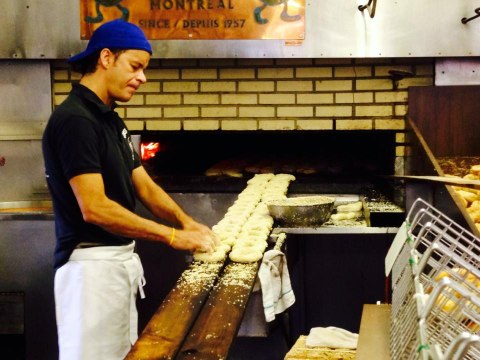 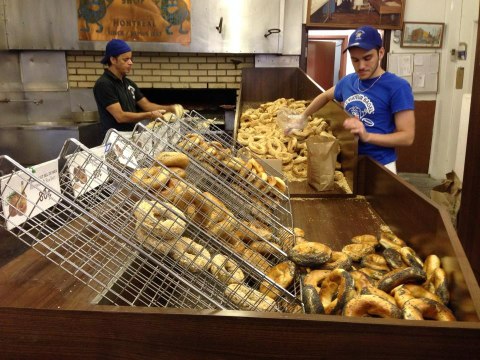 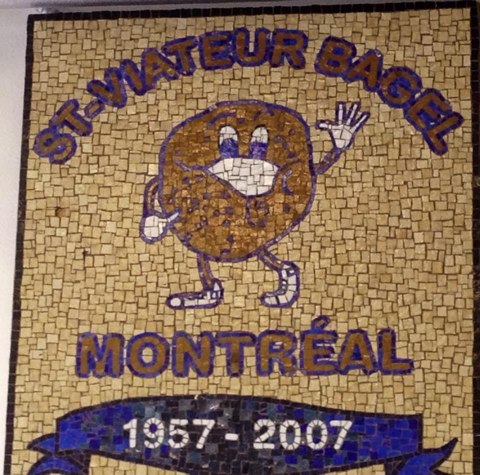 The rest of the afternoon/evening was really spent avoiding the rain watching our new favourite tv channel HGTV and eating bagels with cream cheese. We were absolutely knackered from our walks and needed a little downtime.

For more photos, check out the Montreal Flickr Photo Set