Packed a lot in to this day. Was up at 6 to catch a 7am mini van airport transfer from the resort. Used the web checkin at the airport to skip the queues (tip – always try to do this in Thailand if possible, the normal queues are long). Picked up a coffee from one of the airport shops, which is like a resort itself.

The Samui airport was built by Bangkok airlines and it is really quite lovely. It’s not air con at all so probably is horrid in summer, but in winter it’s like staying at a 5 star resort. Little streets with little boutique stores, large huts as your gate with rattan chairs and couches to lounge in, then carts like at universal studios to take you to the plane. My plane was a bit older with a turboprop (thanks Christian), only two seats either side of the aisle and you enter via the back using stairs that become the door of the plane. I thought I was lucky to have row 3 until I realized it was cause we enter the other end. At least the seat next to me was free. 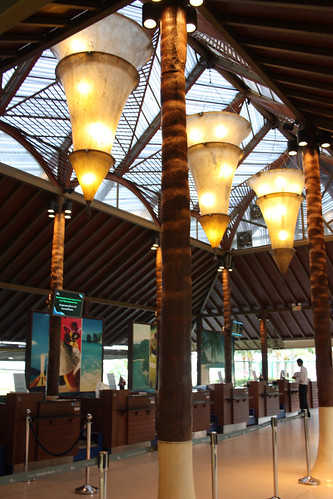 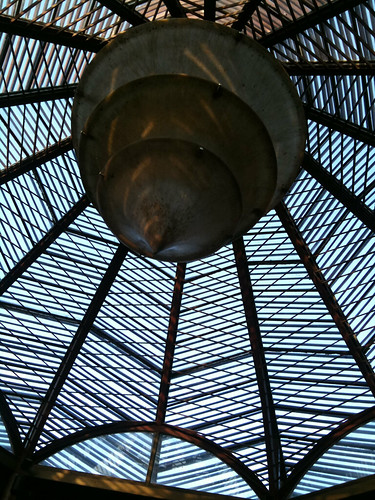 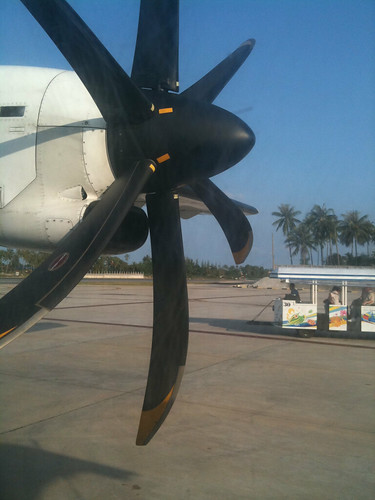 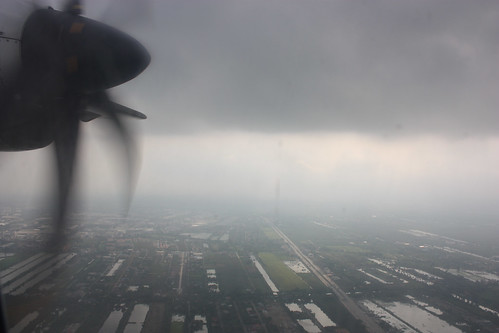 At the Bangkok airport I strolled about like an old hand having been there days before. Did another web checkin for my air Asia flight to Chiangrai. I hit my travelling groove today when I realised I had no concerns about my arrival in a new city, i had enough experiences now to cope with doing whatever was thrown at me. 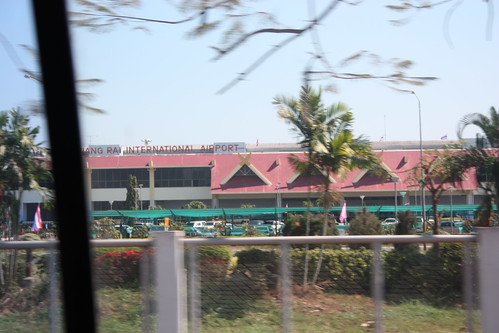 Arriving at the airport I found the taxi booth where u pay a flat 200 baht to get to downtown. Checked in to the Orchids Guesthouse just before all the others from my flight arrived and I realised we could have all shared a cab. Asked her for a scooter while i was checking in and said I’d be back later since she was busy. Packed my gear for the ride (including medical kit) then went back to see about it. 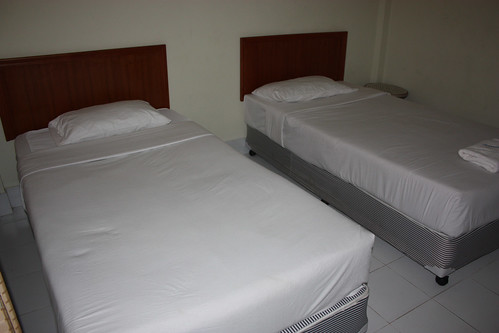 She tried calling but the guy said all the automatics were gone. She said to try a little down the road but they were all out too. Got sent around the corner where i finally found a place that would rent me a new one for 300 baht. Signed my life away, handed over my passport and I was off on a Honda. 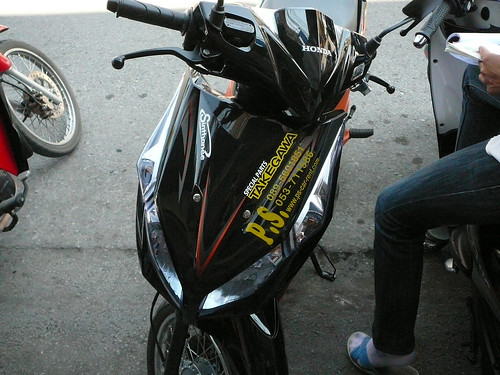 My first destination was 14kms out of the city and nicknamed the white temple. It’s a Wat made by a guy with a unique sense of humour. Of course the gimmick is yhat the temple is all white but apparently there are sculptures of Beckham and Neo from The Matrix in there. I didn’t find them but I did find the all whit gold fish that swam around the temple. It was also the first temple I went inside to see the artwork and observe the monk sitting there. Also saw my first female monks who were visiting and wore white robes instead of what must be the man’s orange. The temple was where the really cool no smoking sign was too. This was the main reason I came to Chiangrai and was totally worth it – free too. 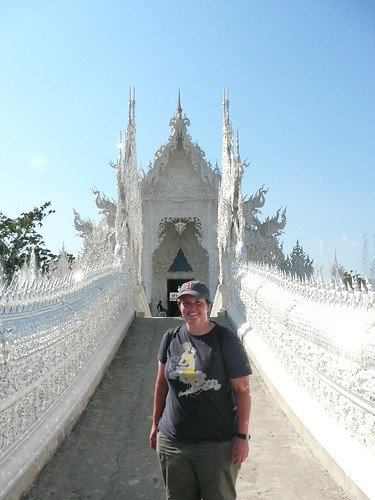 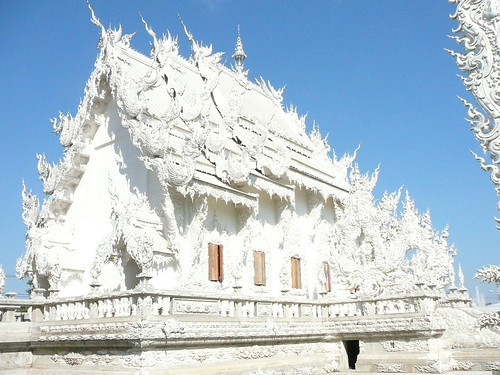 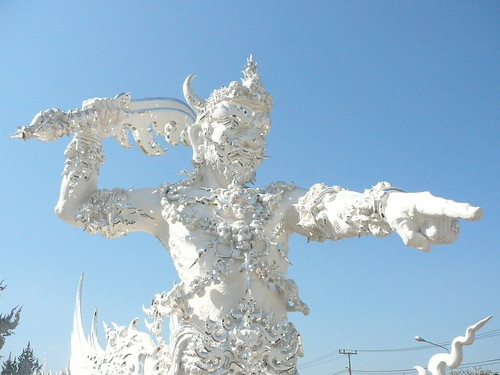 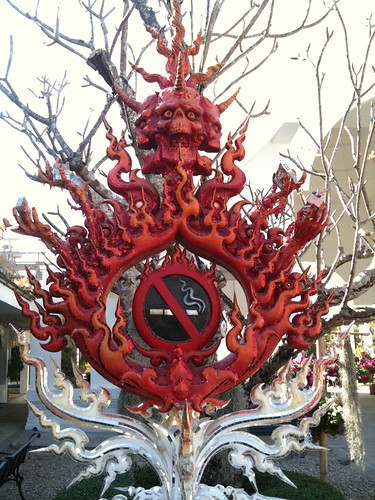 On the same road as the temple were signs to the Kor Kuhn waterfall so I decided to head out there. I had read that it was a 30 minute walk from the carpark but to get tonthe carpark I rode 19kms of rice paddies, curvy mountains and a few bumpy roads. I am always the happiest when I am on the scooter and can make my own choices. 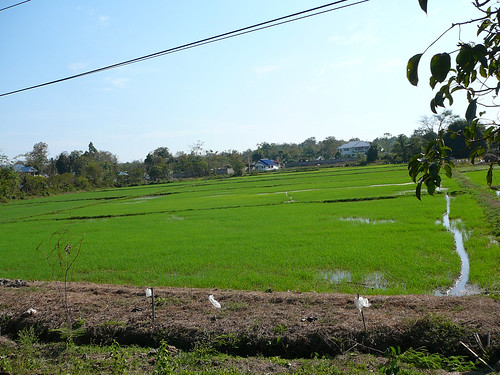 The walk to the waterfall was through jungle, over bamboo bridges and up rather steep inclines. I swore at every sign that told me how far was left – it was a 1.2km walk but totally worked your cardio. I swatted away the mossies that were hanging around – even with my bushmans protection but they didn’t bite. Eventually I reached the waterfall which was nice, but mainly a place for me to get my breath back. The walk back was mostly downhill which was great but when I tried to start my scooter it didn’t want to turn over. Eventually an Italian guy who was leaving pressed the button for me and it of course worked! He hadn’t done anything different dammit! 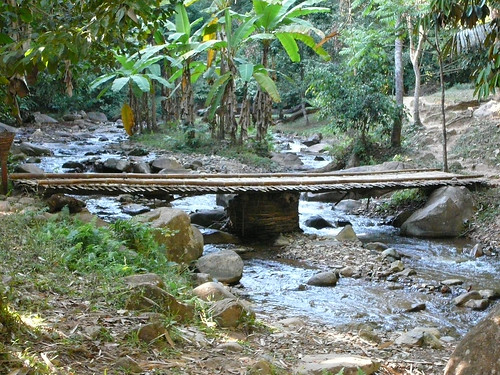 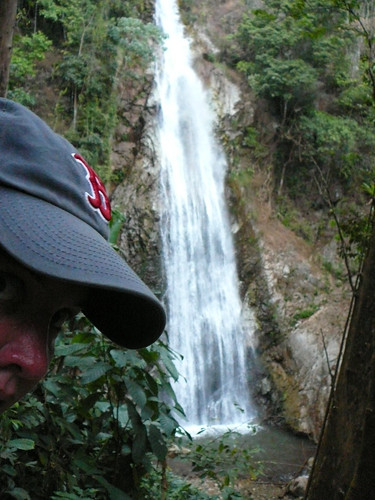 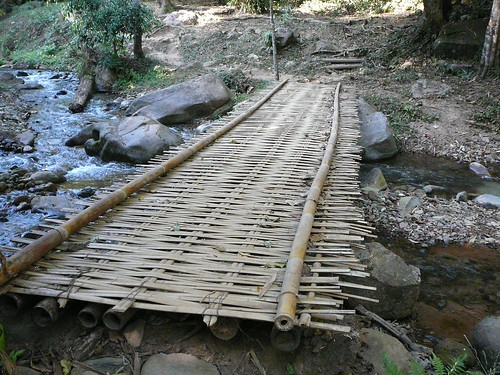 Rode the long journey back to chiangrai passing all the workers on their return home from work. Coping with the dirt and dust in my eyes was annoying but I rode about town trying to find the bus station. Only found the local one which doesn’t go to Chiang Mai so I will have to go hunting for the other one tomorrow with my scooter and try and buy a ticket.

Had no qualms about walking in to a busy non english signed restaurant to get dinner, but they said come back in an hour cause they were feeding two busloads of people. I couldn’t wait that long so I picked up an awesome chicken leg from a stall for like 80cents (like KFC but much better) and went back to the hotel to wash up. Chatted to Kelly and Pauline for a while then went back out for some pham phrick or something which was chicken with capsicum. Then it was back to the hotel utterly exhausted but unable to sleep so I watched Arsenal get kicked out of the FA Cup by Stoke City. 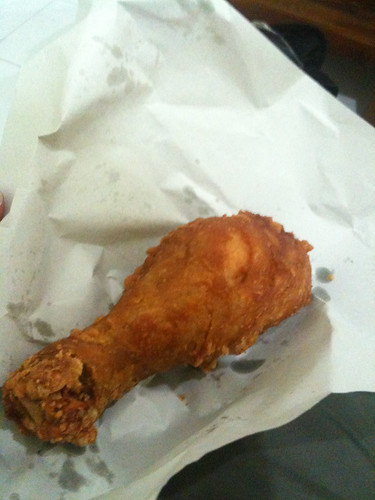 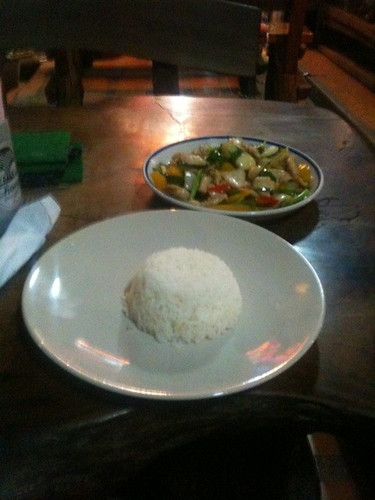 Totally felt like I’m in the zone now in Thailand and the uncomfortable factor seems to have gone. Confidence levels are high and I have no troubles communicating with a taxi driver who can’t speak English. Think I turned a corner today.