Today’s accommodations couldn’t be any more extreme. Waking in a 5 star luxurious room, ending under a mozzie net in a riverside hut and I can’t decide where I am happier.

After the complimentary buffet breakfast at 6.30am I checked out of my heavenly room at 8am and waited downstairs to be picked up by the tour guide from the Elephant Nature Park. I was the first in the van so I got the full tour of all the accomodations everyone was in. We picked up what I thought was a French family but they turned out to be from Caledonia (but France originally). An older guy I thought to be Aussie but was kiwi, 2 gay guys and a backpacking couple from Canada. 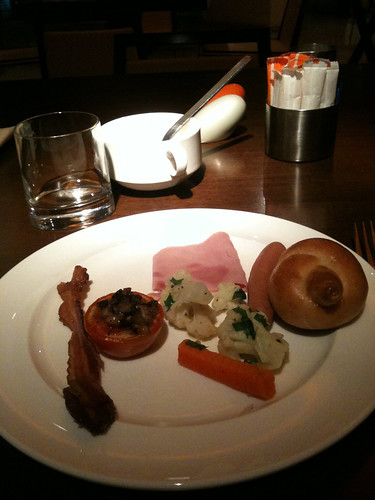 After picking up everyone we drove about an hour and a half to get to the park. On the way they showed us a video of the elephants we would see later and gave us some of the horror stories about what the elephants had been through. I thought it was unfair that I was PMSing all over the place and trying to hold it together as all these sad stories were told. I felt better when I saw one of the gay guys crying as it wasn’t just me who was ready to bawl.

Experienced my first Thailand squat toilet when we stopped halfway at the 7-eleven but only remembered I was facing the wrong way because of the noise I made hitting peeing in the water and not on the bowl. Bum to the door – remember!

At the park we were straight in to it with a briefing on what not to do around elephants and then we were out there petting them. Their skin is much softer than I imagined (I thought it would be as rough as a tortoise but it’s not) and rather hairy. Our guide told us that the older they get the deeper the holes in their temples – they have an 80 year old still in the park! 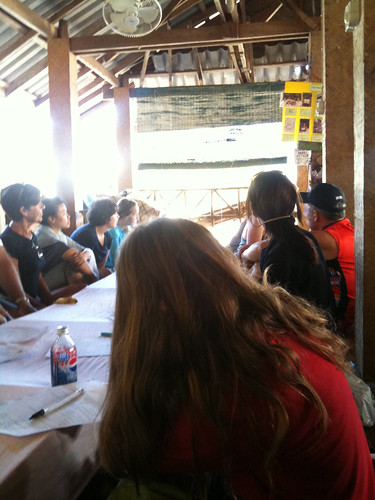 We met some babies (a boy and a girl) who were kept away from us all and were being nannied by an elephant who was pregnant herself. She had stood on a land mine over 8 years ago and had a dodgy back right foot because of it. 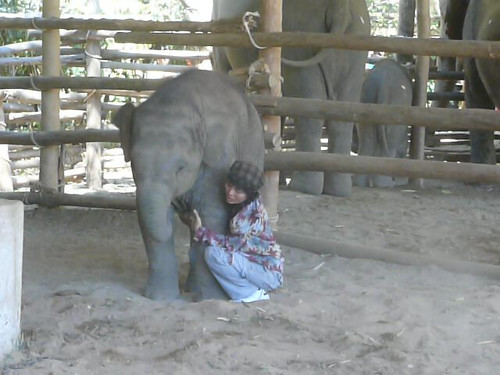 We then headed back to the deck to feed them, each elephant getting their own bucket which you had to feed them from. Food was watermelon, bananas, pumpkin, corn shoots. I got to feed Jokia the blind one who had been blinded by her mahouts when she refused to work doing logging. She refused because she had given birth on a mountain and when the baby came out it fell down the mountain and she couldn’t rescue it and it died. She was mourning it when they blinded her the bastards. She had been adopted by another elephant at the park who was her best friend and guide. So cool. 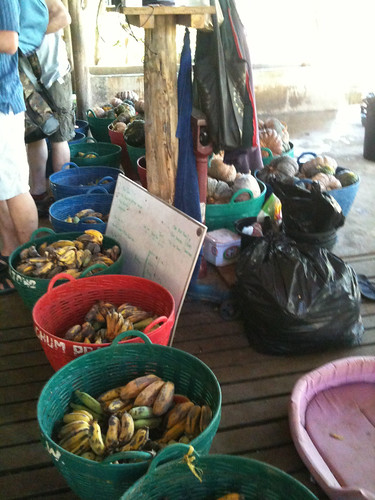 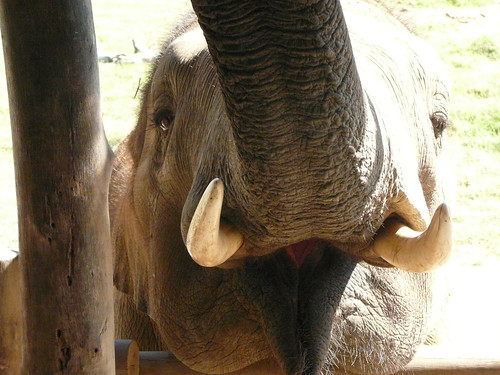 After they ate, we ate too. Some lovely mostly vegetarian food in a serve yourself way and there were lots of people to serve. Not only do you have us night people, but also the day trippers and the longterm volunteers.

After lunch we went and got changed to go take the elephants for a bath. There is a wonderfully cool river that goes through the park and we went down with our buckets and brushes and gave them a good scrub. The water is really cool but you have to avoid the elephant dung that floats by. I couldn’t stop grinning. 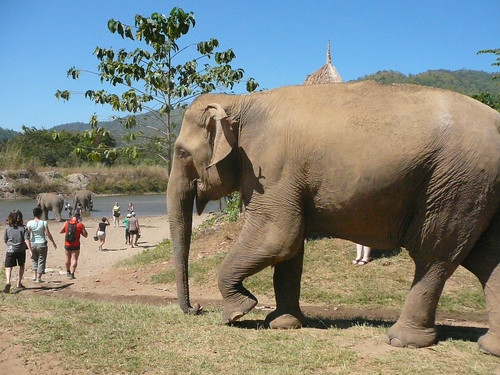 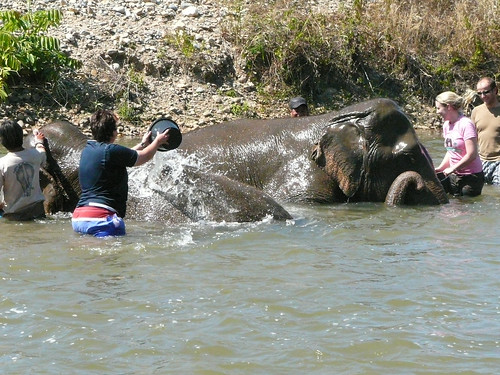 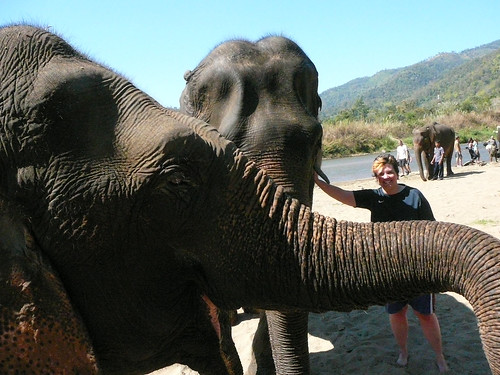 After the swim we got some q&a time and watched another docco about the park. The stories about the elephants really puts you off elephant rides. The way they train the ones that give rides is to lock them in a triangle cage for 3 days and beat them until they stop struggling and lose their spirit. Really horrific. They say its ok to do treks if you sit on their shoulders and necks but not in the baskets. I don’t want to ride them at all now.

Had an excellent green tea that was really really green and some biscuits for afternoon tea and then we were able to checkin to our rooms.

After all the daytrippers had gone home and the elephants has been chained up to eat and sleep for the night I got to spend some time alone with them while they ate. Truly amazing and unique experience. 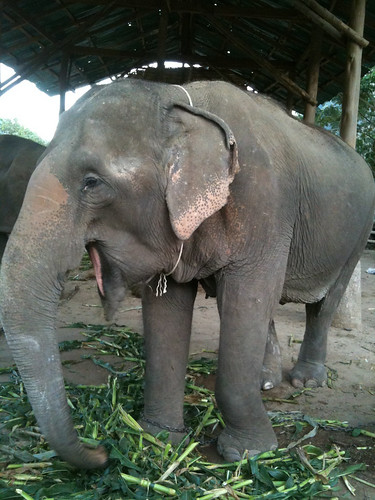 As for my room, I wasn’t expecting a bamboo hut that opened out on to the river but it was incredible. Also rustic – especially compared to last nights bed but totally awesome. I chatted with my gay guys neighbours then we all had dinner upstairs and chatted for a few hours. I was pleased to get some real people chat in for once rather than “woo! beer”. The gay guys and the canadian (vegan) couple were at home talking about Kylie as they were about autism and charity. Kiwi guy was a mud home builder which was dead interesting to me while caledonia talked about seasonal food and cooking in her homeland. Hooray for good talks! 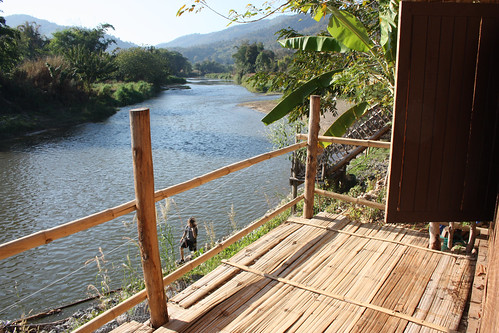 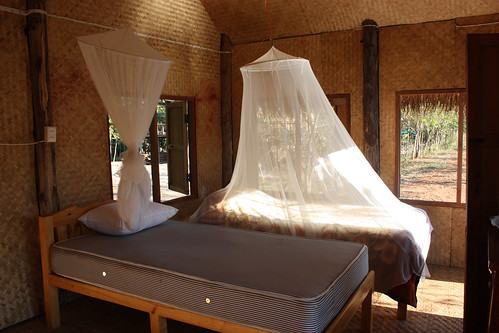 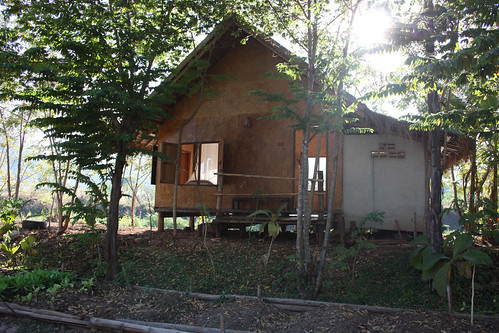 As it was getting cold I headed off to my hut to finally wear the jumper I had carried for weeks and listen to the sound of what I hoped was a cat on my roof. There are twice as many dogs here as there are elephants and there are 34 elephants so I hope the dogs don’t bark all night. 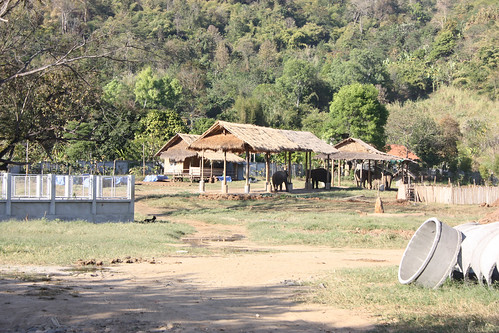 I loved the community aspect of the park and the feeling by all that they are doing something good. They also help the nearby village with lots of things. This was totally the best thing I’ve done so far in Thailand and I think everyone should do it. To think I have another day to spend with them tomorrow!