Dogs barking, roosters crowing, yet no real sounds of elephants while I slept. They are suprisingly quiet creatures when they walk, you’d have no idea if it was coming up behind you. 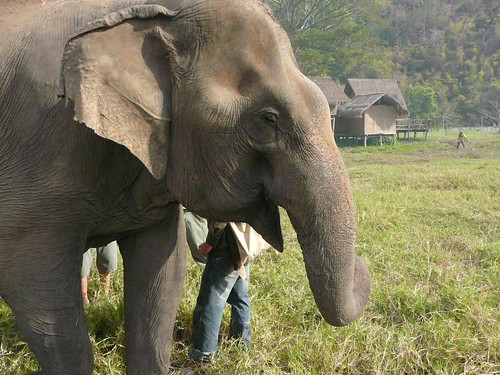 It had been a windy and cold night and I was pleased to have my jumper even though the blanket was warm. Breakfast was some fruit and yoghut with some awesome fried banana ball things. It was only us overnighters and the volunteers for breakfast. They had a big day ahead of them cutting corn, shoveling poo, talking to village school kids and shucking corn. We helped out shucking the corn for an hour after breakfast. It’s a huge job to feed all these animals and they need all the volunteers they can get. They had lots of Aussies there and the woman in charge of the food is an Aussie too. Shucking the corn was fun – especially as we had a Blur cd on in the background. Quality of the corn was inconsitent, sometimes it was the kind you see in stores but some of the time it had maybe 20 yellow bits on it. It felt really good to be helping in even a minor way and I channeled my inner communal hippy with all this working together stuff.

After our hour of corn, we took off on a walk with Jodie the self described elephant geek. She was a tiny little American with intricate tattoos on her hands and feet who didn’t stop for a breath with all these great stories about the elephants. She told us their sad stories of which there were many, but also the great stories about how they formed their family groups and how some families didn’t get along with other families. There were other elephants that were still waiting for their best friend to arrive so they could have a family.

The first family we met were Jokia and Mae Perm. Jokia and her girlfriend were the most famous and everyone thought they were lesbians until Jokia went on a three day sex fest. Jokia was the blind one and Jodie said she was a high maintenance friend. She gets jealous easily and doesn’t want to be too far from her friend. Sometimes when they get too far apart they have this running towards each other love reunion like you see in the movies. When we approached Mae Perm came up to us welcoming and in return got a good scratch behind her ears which she loved. 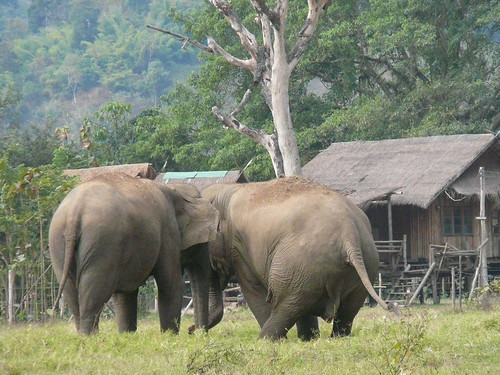 After a while Lily the drug addict I described yesterday and her friend Mae Kaew came by which the other two didn’t like. They were kept far enough apart to not cause trouble. Jodie said the Mae Kaew taught her that elephants do have sex just for fun and her nickname was hussy. So the slut and the drug addict hang out together while the lesbians look on dissapprovingly.

We also met an elephant who had broken her ankle in a logging incident, then because she couldn’t work anymore they tried to make her in to a breeder and had her hip broken by a bull who she was forced to mate with. She walked with great difficulty but she had her friend Mae Lanna to look after her. Mae lanna had one blind eye too and I ended up fostering her later for a year for 2000 baht. 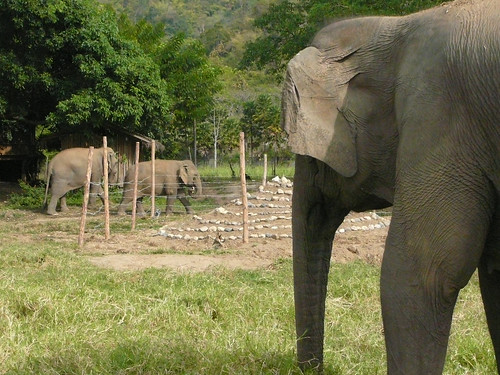 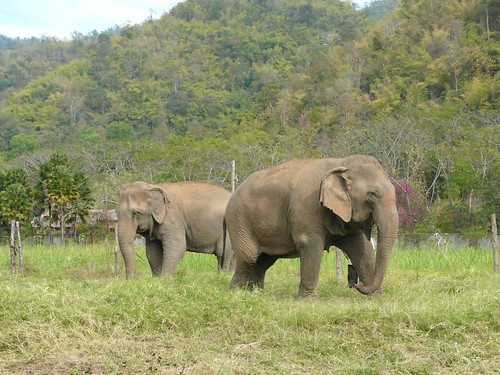 The walk went for about 2 hours and was totally the best part of the whole thing. It was just 8 of us and the elephants (plus guides and mahouts). The elephants were just doing what elephants do, they weren’t on show, we were just observing. They never took us near the elephants who don’t like people as that would be traumatic for them. She showed us how their poo changes the older they get and we looked in on some sick ones in the hospital. 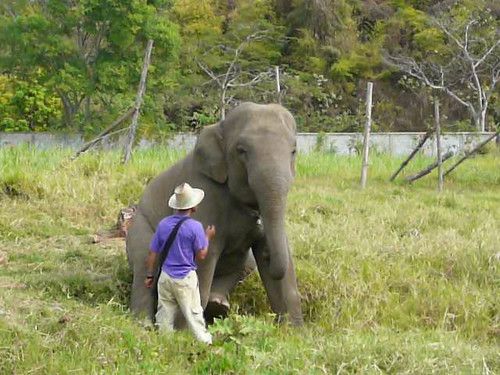 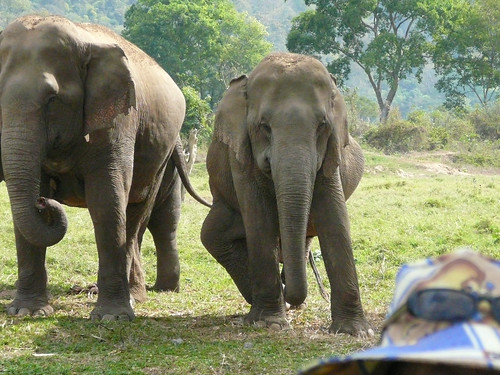 Back in time to feed the elephants and then it was lunch again. Our group of overnighters had bonded and we all exchanged emails then we went and bathed the elephants again. Our guide Por then took us in to the village and then to the temple where he explained some of the symbols and their meanings. We also saw a monument to one of the older kings that had rooster statues everywhere. We had a pack of dogs escort us the whole way which of course made all the village dogs bark at them. It wasn’t a quiet walk shall we say. 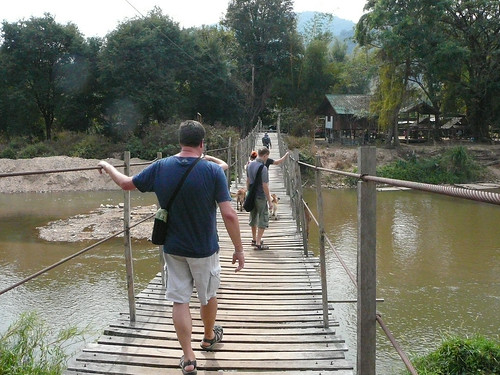 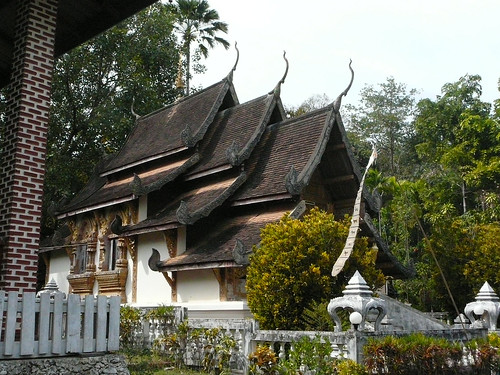 Back at the park we did another feed and bathe with the elephants and said farewell to our Canadian friends Michael and Sara. They were on a 6 month trip and were off to India next. 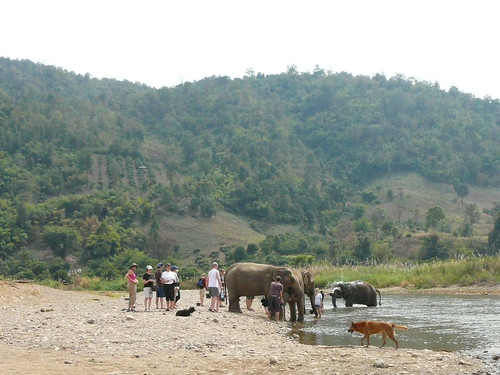 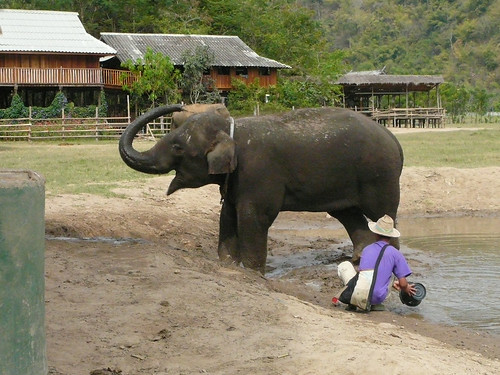 Met a couple of young Aussies from Tasmania on the ride back. We were all dirty and tired but I was still in a good mood enough to explain to Eric the gay guy the two Internet games. One is “gay club or steakhouse” and the other is “German woman or lesbian”. When we later saw a shop called cockpit, he raised his eyebrows and I said “steakhouse”. He was my Chris subsitute for two days which I needed. 🙂

Finally reached my guesthouse around 6pm and after checking in I raced for the hot shower and air con. I was hungry, but not hungry enough to go out, so I just passed out in the room vegetating as I was so tired. Fell asleep to the CI channel (first time Ive seen it in Asia). 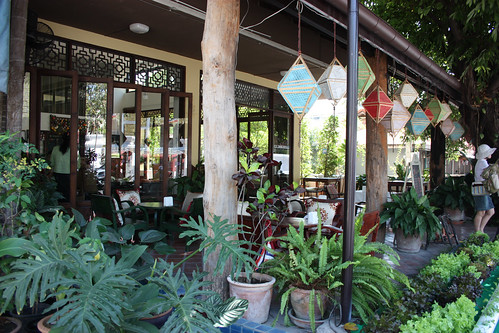 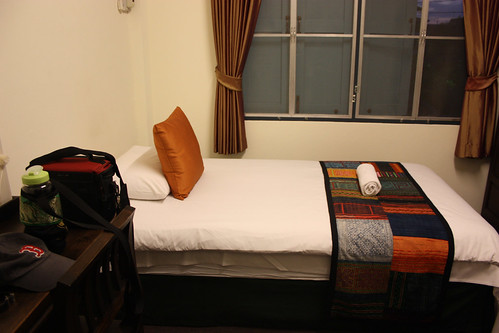 The Elephant Nature Park was an incredible experience. I don’t think I would have had the same feeling if it had just been a day trip. After all the day people have left you get to enjoy the park and can even get some alone time with the elephants. There is something amazing about standing under a dark night sky with millions of bright stars listening to the sound of five elephants munching on shoots all by yourself. The people there don’t seem to be selfish and it is just an overwhelming feeling of goodness. It turned the charity cynic in me in to a believer because everything was all about the elephants. Best thing I’ve done in Thailand now and probably best animal experience I’ve ever had.

If you want to read more of their stories, checkout the Elephant Nature Park on the web.

amyob: @j3thr0 you must must must stay at the elephant park. Incredible!

amyob: @j3thr0 this one is all about elephant satisfaction and not customer. Turned me from a charity cynic in to a believer. 🙂