The Chiang Mai Flower festival is held once a year and I scheduled my visit to the city so I could see it. Odd for someone who doesn’t usually care for such things but I love a good parade and today I was going to see one.

I had been told the parade starts early (8am) but moves slowly, so I just got up when I felt like getting up, ate the free breakfast at the guesthouse and then walked down to the old gate. Chiang Mai has an old city surrounded by a wall and a moat that has been there since the 1200s to stop the Burmese invading. It’s really kind of cool but it sometimes makes it a bitch to try and get out across the moat.

I knew I was at the spot when I saw the people gathering on the side of the road. Picked out my spot and waited, blogging yesterdays elephant trip. You sort of think that asia is always crowded but Chiang Mai only has about 150 000 people, so there were lots of free spots to stand. The parade eventually turned up (maybe around 9) with a classic western style marching band. Great way to warm up the crowd, then we got to see our first flower floats. They were pretty much all decked out similarly – a bunch of flowers decorated the entire float in quite brilliant themes then either one to six pretty girls sit on top. I got to see Miss Thailand 2009 who got lots of attention from the photographers. There were also some more traditional musicians who sat on the back of pickup trucks, people in traditional clothing and more marching bands. There was one moment when a float almost lost it’s top when it touched an electrical line. I was amazed that they just pulled out some ladders from underneath the float, used them to lift the wire and then continue on. I thought they were all going to die but I guess they were grounded. Got a video of it too. 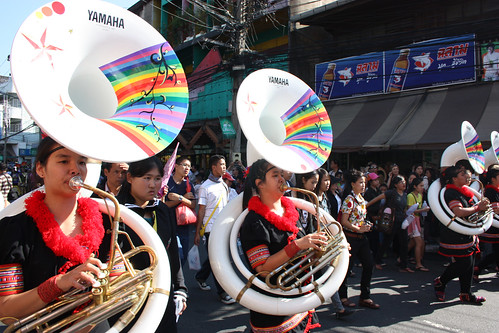 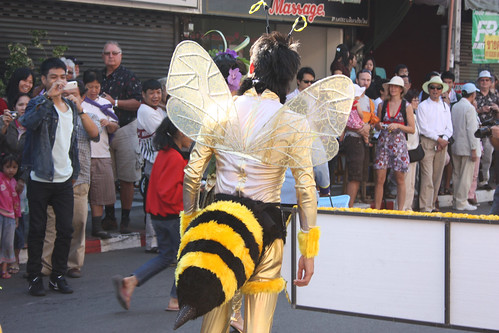 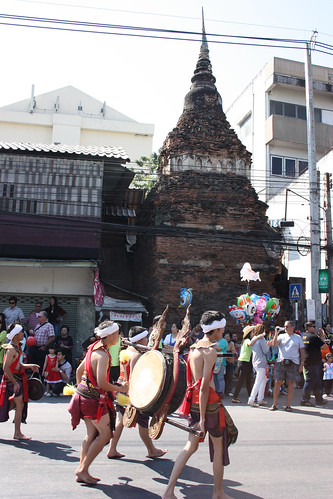 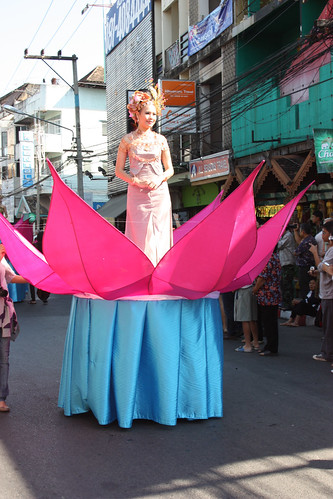 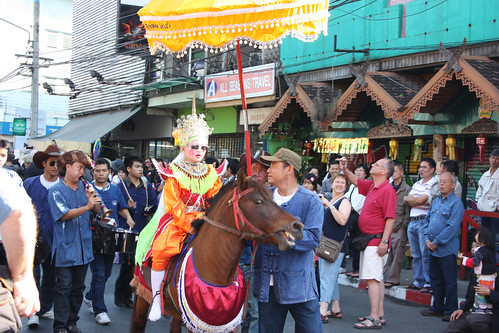 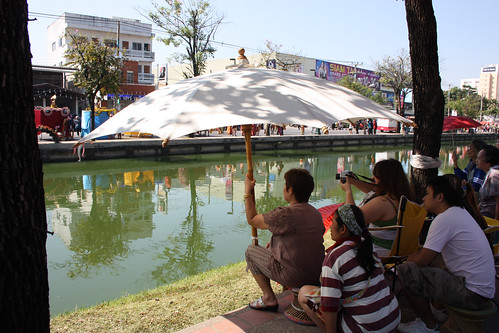 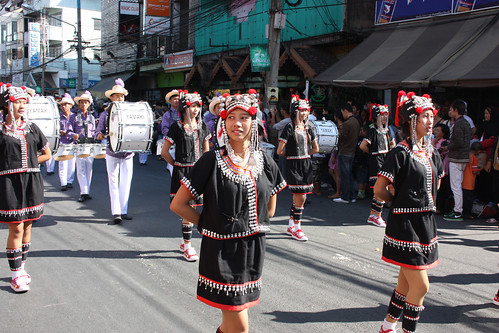 The parade did move so slow it became a little boring waiting, so I started to follow the procession to the park where all the floats end up (only after a toilet break in starbucks which had a pretty gross floor in the ladies). Turned out to be a long walk to the park, but it followed the moat and wall which made it picturesque and surprisingly cool temperaturewise. 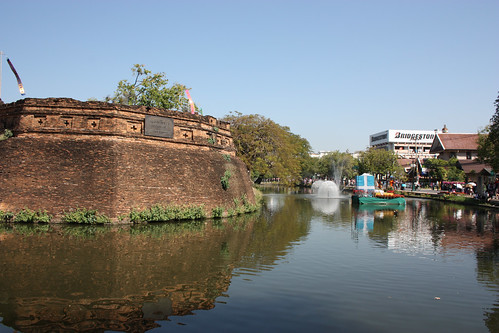 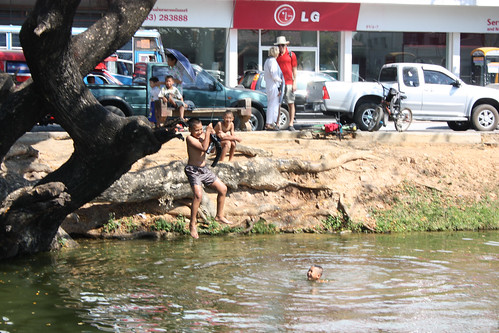 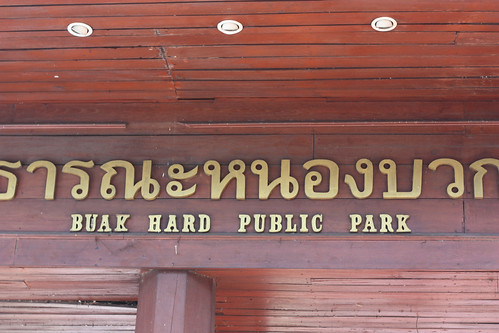 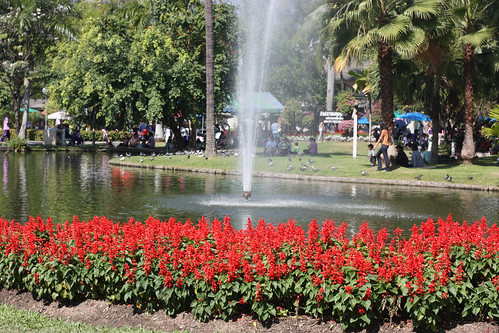 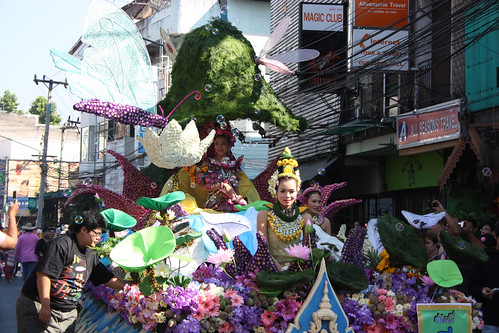 The park was full of food stalls that I couldn’t eat from due to the fact that they were out in the sun, sitting around with all the flies. I have an overnight train ride tomorrow so I don’t want to risk it but I was frustrated by what looked and smelled so good to me yet so unobtainable. Instead I headed back to the hotel for a little break. 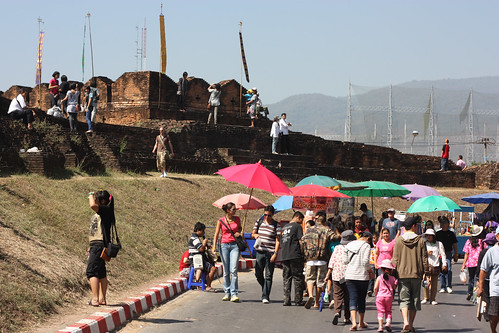 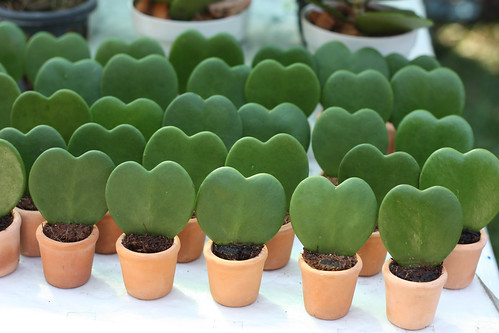 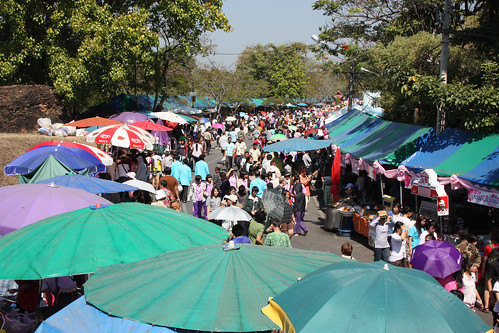 After a rest I set off on a long mission to a sandwich shop at the other end of the old town. I usually set myself some long place to go so I can explore on the way. It was rough after the walking I’d done in the morning but it was worth it for the pineapple ice drink and hamburger. It was a pretty good burger too. Stopped in to the big central shopping centre to pick up some supplies (like toothpaste) and then trudged back to the hotel for another rest. 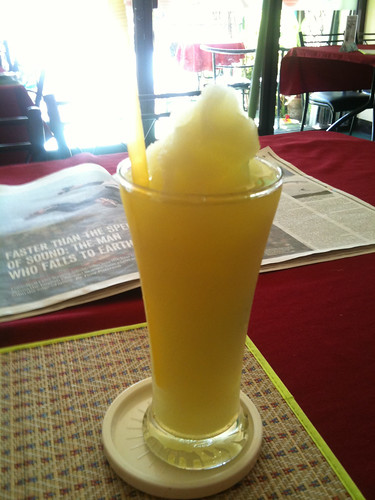 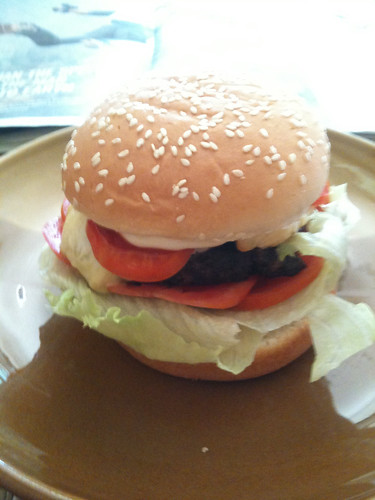 Dinner was at Huen Phen which specializes in Northern Thai dishes. I was after some Keow soi which is a curry noodle dish but they only do that for lunch so I ended up with a lettuce pork soup with rice. I’d like to try something hotter but although my mouth likes spice the rest of my body doesn’t. Especially my red face. The food was ok, more like some nourishment if you were sick. The decor was old antiques in the lanna style which was kind of cool. I was sitting a what used to be an old sewing table with the footrest that you push back and forth. Shame about my ordering, might have to go back and try it for lunch tomorrow before I catch an overnight train to Bangkok. 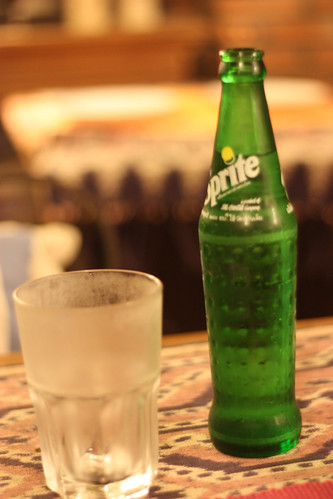 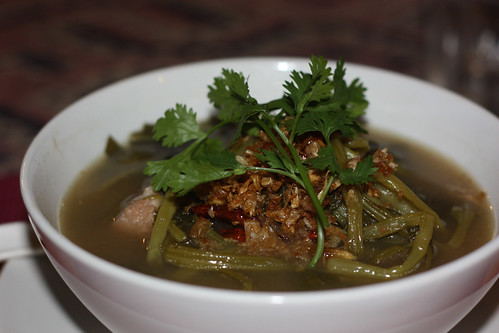 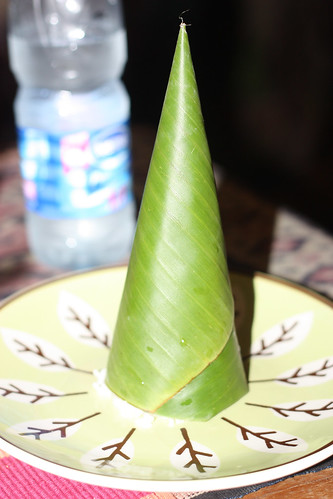 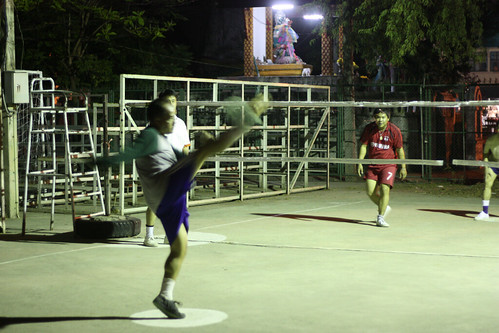