It’s 5am, the curtains are open and it’s overcast. Through the window is a serene lake and jutting out in to it is a pontoon. The only thing missing was Morning by Greig playing in the background. The peacefulness was there, taunting us, knowing that we had to take the hire car to Portland by midday, which seemed much less important when I was looking at the lake. Alas, the spell was broken the minute we started packing our bags. Somehow it seemed even harder to pack our luggage in the tiny little Pontiac Vibe car, but somehow we managed to fit it all in again. By 8.30am we were on the road heading for Portland. The plan was to pick up a minivan there to eventually drive to San Francisco, cause there was no way we could continue travelling in the Vibe.

The view from the bed in the morning: 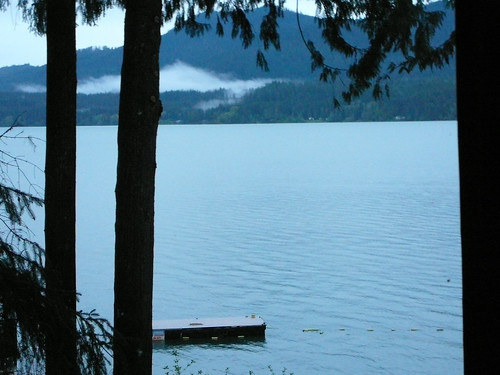 We have to fit in this?: 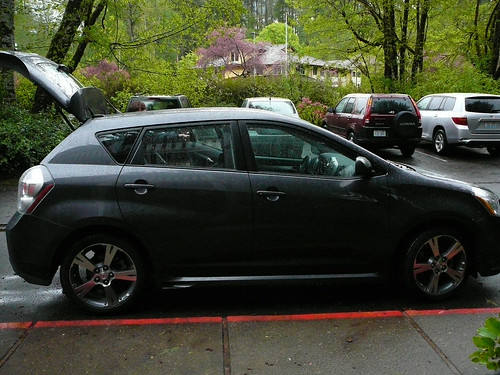 How much space we had to work with: 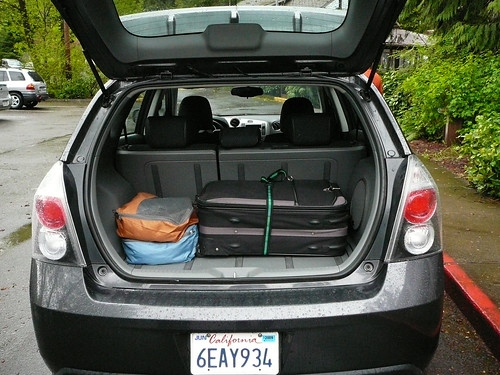 How much we got in: 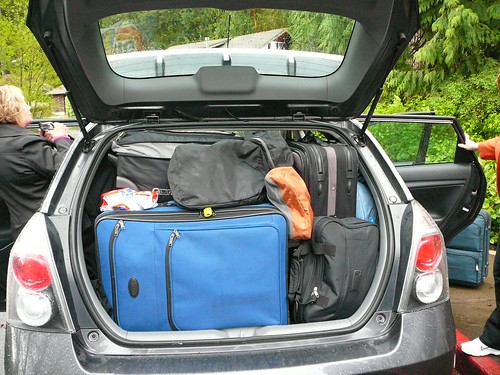 After about an hour and a half driving we stopped in Aberdeen for a toilet break and some information at the information centre. I was interested to know how long it would take to go via Astoria to Portland but we wouldn’t have enough time to make it before midday. Astoria is known to me from movies like the Goonies and Kindergarten Cop – the attraction is mainly it’s picturesque houses and huge bridge. Had to save it for another time. In Aberdeen Auntie Sue left us a present in the car which made us laugh, but I won’t detail what the present is here.

The drive to Portland took us along a bit of a boring highway so they dozed in the back. We saw signs to Mt St Helens which Mum would have desperately like to have seen and I would have too, but once again the damn hire car dictated things. I really should have just booked another day since there wasn’t any real compelling reason to swap the cars on that day, but I couldn’t plan everything right. I think that was probably my biggest mistake on the journey because the deadline sort of ruined what we could do for the day.

The car hire dropoff was near the Portland airport but we first went to the  to pick up the minivan so that we wouldn’t be without a car. Time was really tight when we were lining up to sign all the papers for the car. The lady at the counter was really chatty but I was too stressed to chat back so Pauline handled the pleasantries. In true Portland style she picked us for the lesbians we are which was to our benefit as she gave us the second driver for free – just like a husband and wife would get. This lady wasn’t young either, so it was my first introduction to Portland’s world renowned tolerance. In the end though it was all taking too long, so I left to take the Vibe back. While we had been sorting out the paperwork the others had unpacked the car in the rain so it was ready to go when I came out. I put the gps co-ordinates in the other guys gps and then mum and I left to drop off the car. I had the address but we drove past it thinking it wasn’t right because it looked like it was only trucks. We went inside and dropped off the keys and it wasn’t until later that I realised the car wasn’t completely filled up with petrol. Pauline had told me to fill it up when I left her, but I’d forgotten it in my stress to making the deadline. While I was waiting for the others to come pick us up, mum was busy breaking the toilet inside which I had used with no issues. This was the second time she’d broken a toilet in a week and she was beginning to get a reputation. The lady at the counter ended up fixing it easily and it was all good.

The others rocked up in a white minivan which they had gotten to pick themselves. It was a rare luxury for us to pick the car and it ended up being a great choice. The van was a Chrysler Town and Country which was wicked because both the side sliding doors and boot could be remotely opened with the key as well as buttons on the roof. We had never been in a car that had so many automated doors so we had a lot of fun with it. 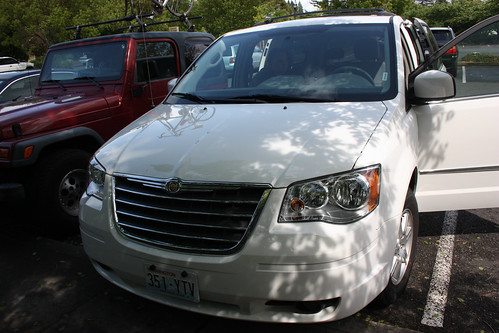 A video of the automated options on the Town and Country (if the car looks out of focus and my fingers are clear, might be because Pauline had the camera in macro mode for about 7 days):

Our accommodation in Portland was probably the most unique on the entire trip. A small boutique hotel chain had bought a school that was built in the early 1900s and renovated it in to a hotel/bar situation. The bedrooms are in what were once the classrooms, the bars are in small rooms and the boiler room, the auditorium is now a cinema and the cafeteria is a brewery. There is even a restaurant and a pool! We tried to check in around 1pm, but that was too early for them, so we asked what we should do instead. They suggested we visit Alberta Street which apparently wasn’t too far away and was a food and arts type district. I plugged in an address in to the gps and we went on a long journey to an area that was just a bunch of houses and a dead end. I discovered that I’d taken us to N Alberta Street instead of NE Alberta Street – wrong side of the freeway!

Eventually we ended up in the right area and thanks to Yelp we found a Thai restaurant for lunch which was fittingly called Thai Noon. At this point we were all a little annoyed and grumpy, probably aided by the rain but I was happy to finally have some asian food to eat. I’d missed thai so I ordered a standard pad thai and thai tea. Pauline got stuck in to the beer so I got to drive the new minivan back to the hotel. We checked in and discovered the movie for the evening was Frost/Nixon and was free for guests. We decided that we would all be up for that before we went to check out our rooms. 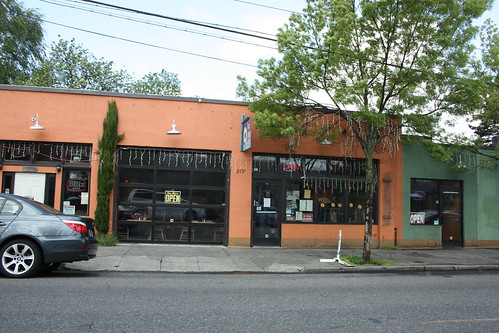 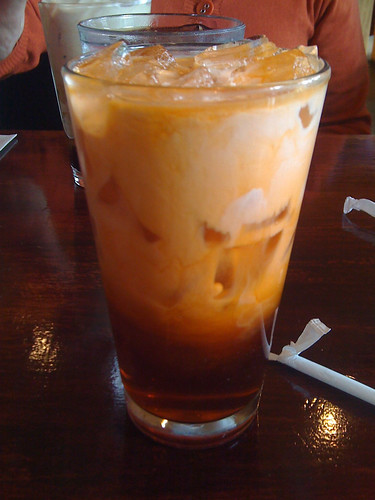 McMenamins Kennedy School has a unique setup where you walk down the hall that little kids used to, then use a card to get in to a second hall which is shared between two rooms. In that hall is a blackboard and two doors to each room. This caused us a hassle later on since with three in the room and two cards  we couldn’t just knock on a door to get in. It didn’t matter much though because the room was awesome. Each room has a theme, ours was the Crooked room and was really close to the cinema. The windows are tall, the cupboards are behind the old blackboards and there is a desk and lounge chair. Mum was stuck with a trundle bed again, but the room was huge so that wasn’t a big deal. 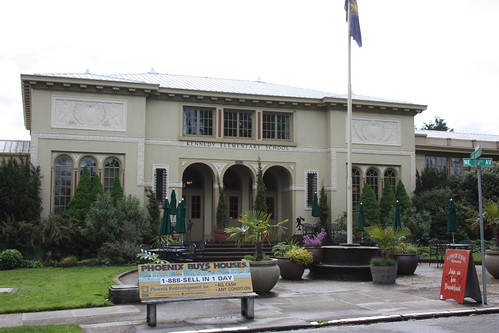 The corridor to our room: 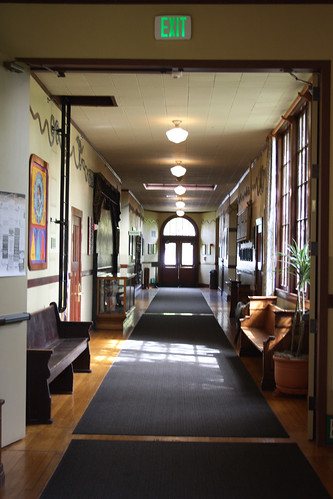 A nice way to enter the room: 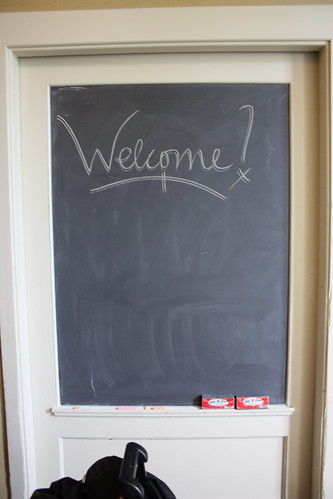 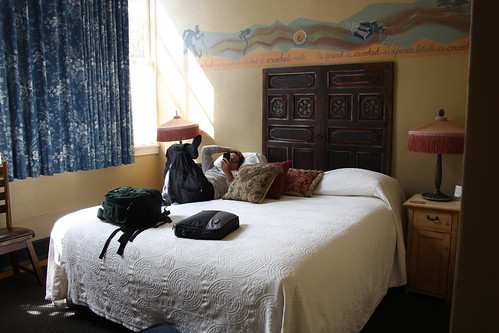 Mum, a comfy armchair and her trundle bed: 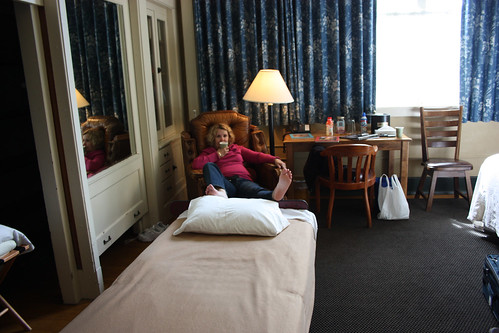 The cupboard that was once the school blackboard: 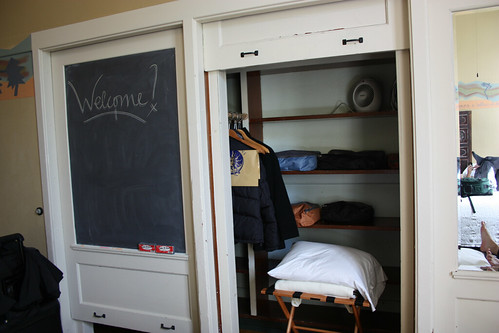 We decided to do the laundry and try to find a UPS to send some stuff home, so Mum, Fiona and I took off in the car to do the wash. After putting the clothes in the machine Fiona and I left Mum to find the UPS in Hollywood, Portland. Google maps was insistent, the UPS website was insistent, the gps was insistent but dammit if we couldn’t find it. Fiona and I went back to the laundry with defeated shame, but it was a cool little side trip for the younguns of the group. At the laundry things took longer than expected because one of the driers was turning but not drying which meant the 40 mins of tossing a whole bunch of wet clothes. We had to dry it all again but luckily it meant that we checked the wash one more time and discovered my favourite shirt was still in there! After a few oohing and aahing at Mum about it (since she did the transfer) we folded up the clothes and headed back to the hotel.

We arrived back at the hotel in time for the movie to start, so after buying some beer and pizza and settling down in to the comfy couches. The cinema is a mishmash of different chair styles and little tables but is just a really homely place to hang out and watch movies. From what I could tell is that they sell tickets to non-guests too cheaply and show movies that are a few months older than the current releases. Surprisingly good sound and video though for a place that seemed so laid back. I was enjoying the beer and pizza and Frost/Nixon was a fantastic movie but I started to deteriorate and by the end of it felt really weary and sluggish. Think I might have even had a headache. I put it down to the carbs and beer and headed to bed after the movie. I was really in love with the hotel and what it had to offer and could almost stay there in Portland without actually going outside. Best hotel on the entire trip.

The Detention Bar – we didn’t drink here, but they are the only bar that allows smoking: 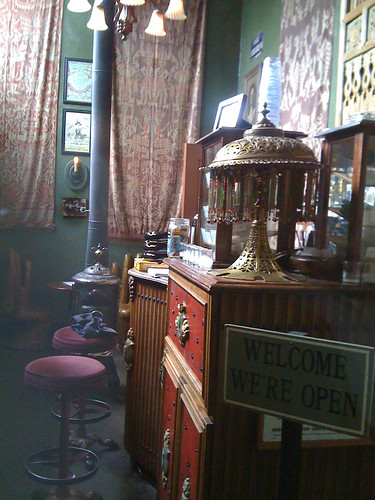 Left the beautiful lake quinault and are on the road to Portland. Fell in love with the lush trees, lake and mountain.
4 would fit easily. Good stereo too.
@fantus yes, we saw catdboard  cut outs and warewolf dropping chocolates. Friendly people and they are milking the twilight angle.
Rained a bucketload the whole drive to Portland but now we are here the sun has come out.
Stressed out about getting the rental car back in time but we made it in the grace period. Adrenaline is slowly dissapating.
Checking in to the school house in Portland. There is a bar in every corner. Detention room is cool but for cigars  http://twitpic.com/4olr0
Sad to say goodbye to the Pontiac vibe but now we can stretch out in the Chrysler town & country. It has buttons to auto open the slide door
Laundering again. They do wash and fold here but we figured that we may as well wait. It’s somewhat hypnotic.
Off to see Frost/Nixon for free in the hotel theatre for free. There is even a brewery here and about 5 bars. I like this hotel A LOT!
It is the coolest to sit in a lounge chair, drink a pitcher of beer watch a movie in a couch and then cross the hall to your room at the end
I am so in love with this hotel and there isn’t even a coffee machine or tv in the room! I want to live here.
@j3thr0 yes, but here the pizza is delivered to my seat and I share it with at least 3 other people. Screen is bigger too. 🙂
@j3thr0 I meant 30 other people. Is going back to work as bad as I imagine? Wait, don’t tell me.
@j3thr0 I’m pretty sure @clialios and Mr Cheah would both be interested in the demos if you haven’t already.