Not a great breakfast to start the day, sort of cold vegetables, not very nice sausages and some fruit with yoghurt. I’d had a good sleep though on a comfy bed and was checked out and waiting in the lobby at 8am for my ride to Halong Bay. If you have seen Top Gear Vietnam this is the place where they turned their bikes in to boats. Van arrived at 8.30 and I was the last to get in. 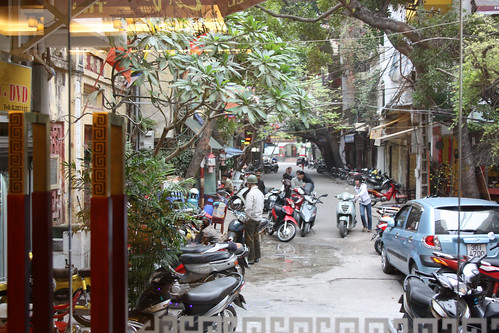 Already in the van were a French family from Taipei, a Korean couple with their 5 year old and a kiwi couple who had been living in the uk for the past four years. The drive to Halong Bay takes 3 hours with lots of rice fields in between. I spent the time chatting to the kiwis, trying to figure out the traffic rules and looking at what was being carried on scooters. Today’s winners was a monitor on the back and a pc in the legwell, a tv box with an antenna attached and an entire dead cow strapped to the back. I had no time to take a picture but it was both fascinating and gross. 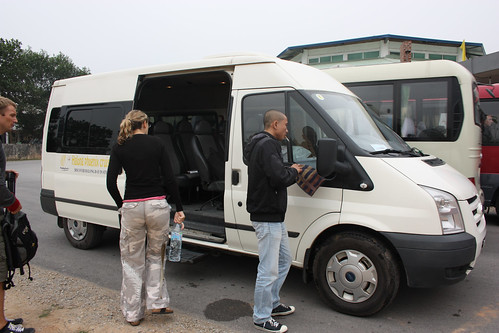 Since it was the last day of the year for the vietnamese they were all out getting there last minute shopping items before they take their holidays. I likened driving in Vietnam to like the hardest level on a car computer game. It’s so insane. People driving on the wrong side of the road, cars reversing in to the street, intersections with no traffic lights. I dubbed the imaginary game Hanoi Heart Attack.

At the halfway point of the drive we stopped in a tourist centre for a toilet break and some shopping if we wished. They sold souveniers and food but although I was hungry i couldn’t find anything that appealed. The second half of the journey was spent driving past factories with mostly obscure named but I did recognize Canon. We also went through a coal town which had blackened streets from the trucks. 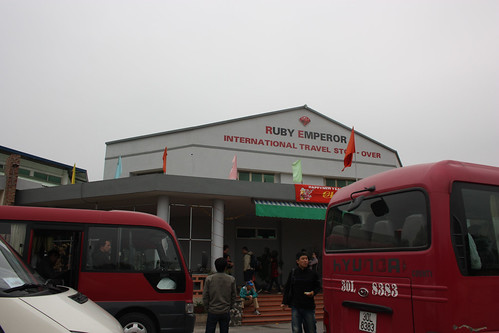 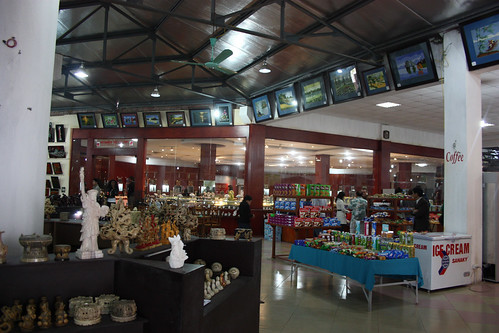 The scenery changed as we neared Halong Bay – lot more mountains in the distance. It was overcast and cold when we got out of the van in to the ferry madhouse. Tonnes of tourists all heading out on to the many boats. And when I say many, I mean millions. They are all wooden junks and they are all vying for the tourist dollars. Not even on New Years Eve do these guys get a break – they have to take us out. New Years (Tet) is a time to spend with family yet they have to spend it with us. 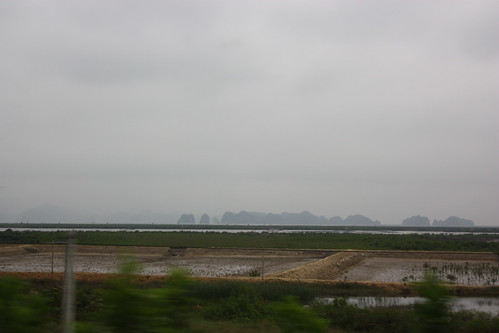 We spent a shivery 30 minutes waiting for the other bus to arrive and I resorted to buying a $3 packet of m&ms to satisfy the hunger. I was not prepared at all for the cold in my 3/4 pants and light jumper so was greedily eyeing off the big jackets they were selling nearby. Eventually though the other bus arrived and we got to go to the tender boat. Unfortunately the other group then got to get on the tender boat first so we were left to freeze for another 15 minutes. Not enjoying that at all. We all eventually got on the tender when it came back, however we nearly drove off without the captain when the boat kept turning and almost headed in to another boat. They normally just drive it face on to the pier, don’t hook it to anything and keep the power on so that it wedges against the pier. The captain went to buy something and when he was gone it started to turn. He came just as it was about to escape and he bolted down the stairs and pulled back the accelerator just before we took off. 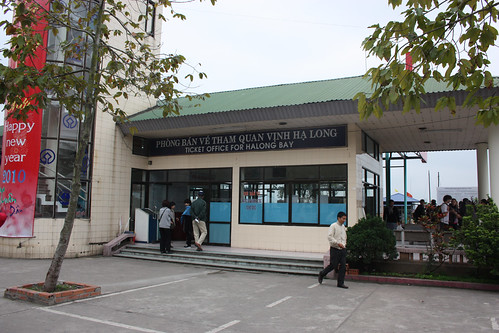 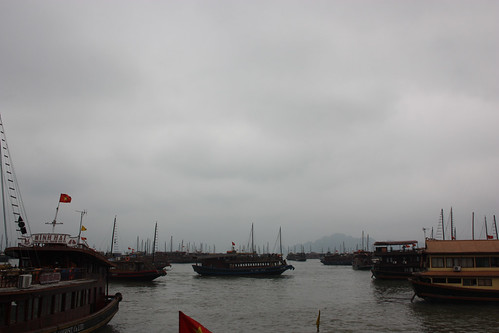 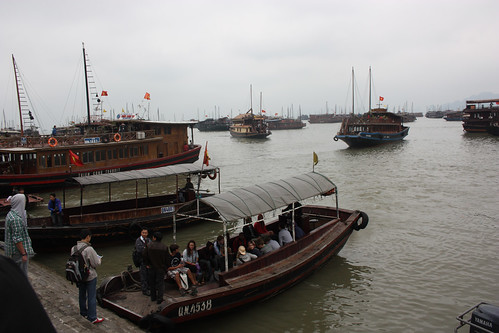 On the big junk we went upstairs for introductory drinks and then were allocated our rooms. I got a double to myself and it was a really well fitted out room with a great shower and toilet. Very nice since I think we were on the good ship. There was an aircon as well which i used as a heater to thaw out. Used the time to change in to jeans. Then we returned for a lunch while the boat started moving slowly through the bay. The food (served family style) was ok if not that filling but the scenery was gorgeous. 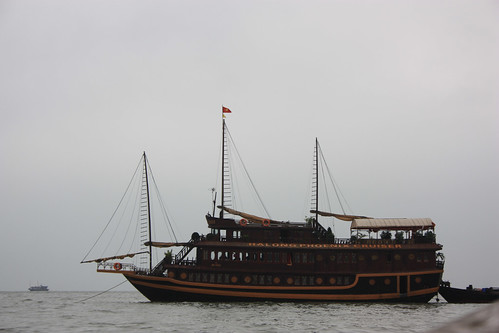 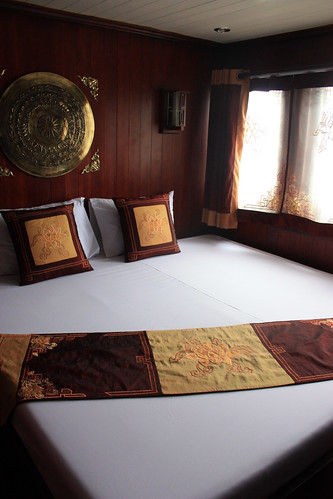 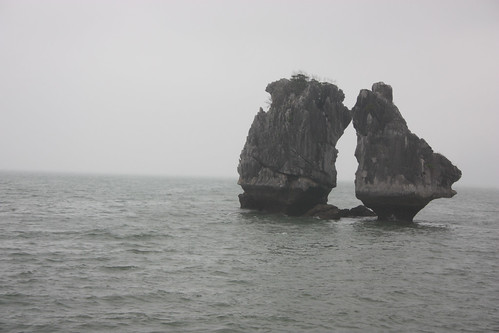 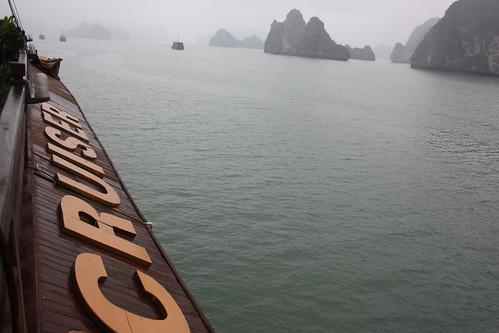 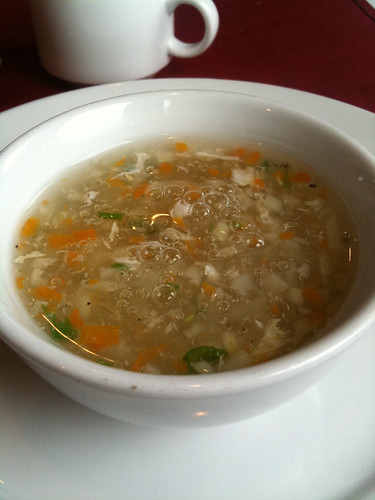 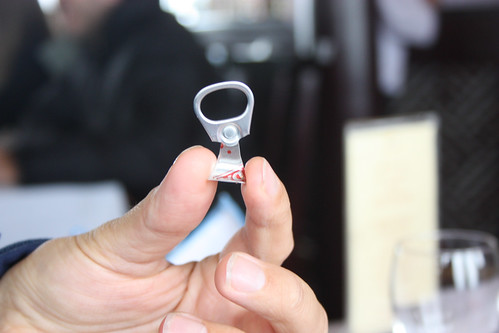 After lunch we returned to our rooms for a while as it was too cold to go out on the sundeck of the boat. Around 4pm we got on the tender to go to a cave. By now it was drizzling rain and colder but once we were in the cave it was ok. Of course there were lots of people there from other boats so there was always a jostle to get a good view. The caves were bigger than I expected and I wa actually quiet impressed. It also gave us a top down view of the bay as we had to walk up stairs to see them. The fact that you share it with so many people makes it annoying though. 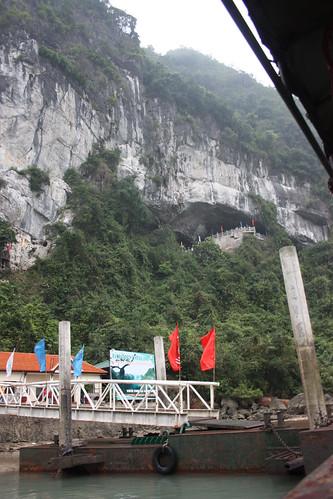 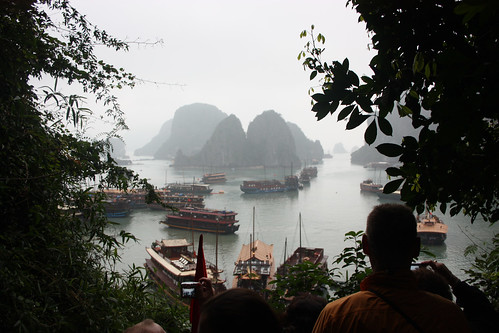 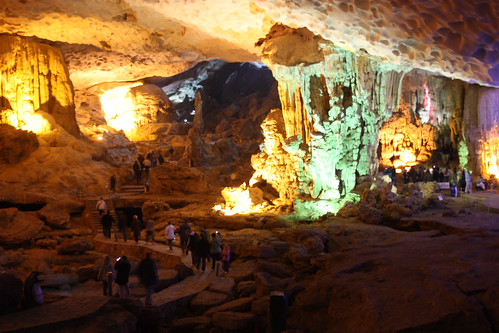 After the cave we had the choice of kayaking or returning to the boat. Not having a rain jacket I opted for the boat – would have liked to kayak but it was just too cold – plus I was starting to get a sore throat which was a sign that I needed to sleep. Around 5.30 we all met up on the sundeck where our guide told us all about the importance of Tet and how they said goodbye to the past year and prayed for good things to happen in the new year. We then went downstairs to have some of the traditional Tet food – a sticky rice pork thing wrapped in banana leaves and cooked for 10 hours and a pork thing that would be good on a sandwich. It was really kind of good to partake in this custom which is the highlight of the year – almost like Xmas. That was the going away party for 2009, next was 2010! 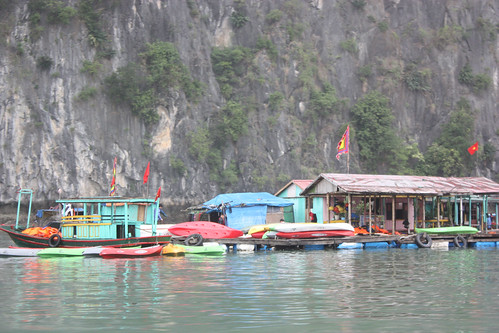 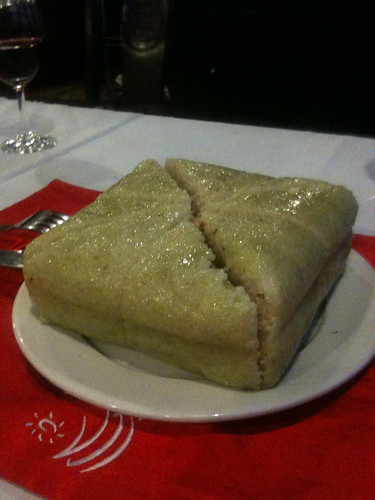 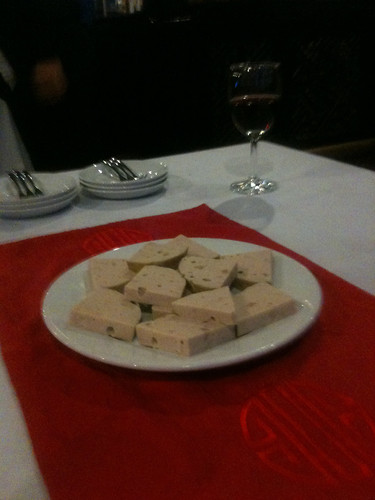 Had dinner at 7.30 which was lots of seafood, stir fries and spring rolls but the tastes just weren’t working for me. I ate it all but didn’t think anything was that good. Ate all my meals with the kiwis and Koreans who were really interesting. I think I fell in love with the Korean couple – they were just so beautiful and entertaining. Their kid was cute too – he bowed to his dad to as part of new years. 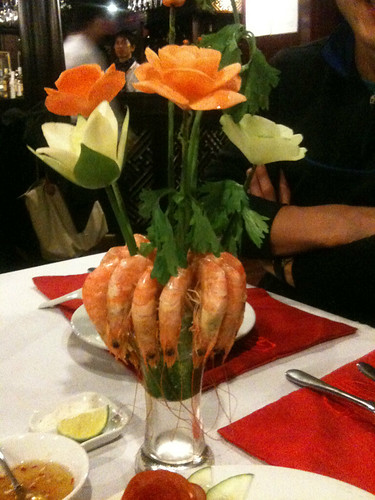 The boat was going to have a party at midnight too, which I considered hanging out for, but 10 minutes in to my reading I fell asleep and only woke up at 12 when I heard them yelling happy new year! Apparently they were really noisy and listened to dance music and kept people awake but I slept great – can’t deny the staff their good time when it’s their special day. I think there may have even been fireworks!