I have flown a lot of flights in my lifetime (especially in the past four years) and nearly every time in has been in economy. Walking past the business seats seems to emphasise how tiny the cramped seats and you can’t help but wish you were the person who had shelled out obscene amounts of money for a little bit more space. I’ve managed to go business on points on a Brisbane to Sydney flight, but that isn’t really the business experience. My first true international experience on business was a free flight from Auckland to Sydney on Air New Zealand which was horrible – mainly because it was so amazing that it ruined me on economy forever. It was only three hours, but I didn’t want it to end! Needless to say, it became a stretch goal for Claire and I to fly business somewhere and when a business sale to Japan via Qantas was offered, Claire and I snapped it up. It seemed like almost a year before the day arrived when we could take our luggage to Sydney airport to smell the rarefied air of the business elite.

Waving goodbye to my mother and Elvis, Claire and I got in the cab at the usual crazy early time that comes with a big trip. Luckily the Qantas business lounge was open for breakfast even at that time so we scoffed as much bircher muesli and coffees as we could stand and then sauntered on to the plane speeding down the business line. It’s amazing how quickly you adapt to feeling entitled.

To maximise earning Qantas points we didn’t take a direct flight to Narita, but instead flew via Brisbane – the added benefit being we could try the International lounge there. I was expecting to be able to take the airport train to transfer between domestic and international, but it turns out that’s for Virgin flights – Qantas fliers have to take the transfer bus. Moving through customs quickly, we headed straight to our new obsession – the lounge – with only a cursory glance at the duty free. Unfortunately we were pretty disappointed by the small space that was pretty full but it did eventually clear in the few hours we were there cooling our heels. As small as it was, it was still better than sitting in the general airport area (because I am a snob now and want free coffee whenever I like).

When the flight was called, we again took our entitled fat business asses down the business lane to discover what seats we were going to get. I was hoping that our flight was fitted out with the new Marc Newson herringbone style seats and it was like we’d hit the jackpot when we saw the sweet black leather. 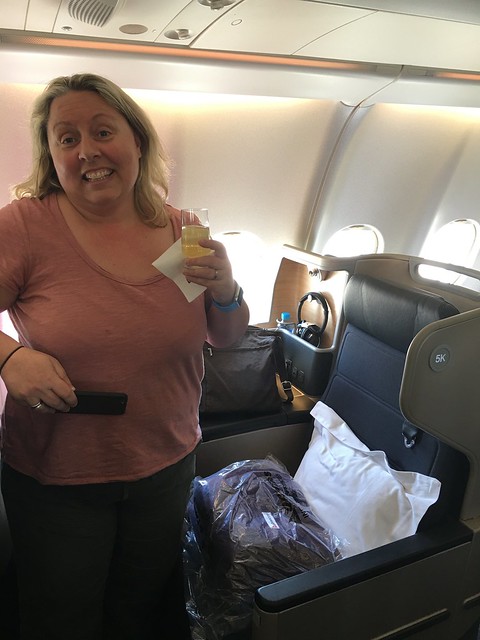 Sipping our champagne, we examined our goodies: 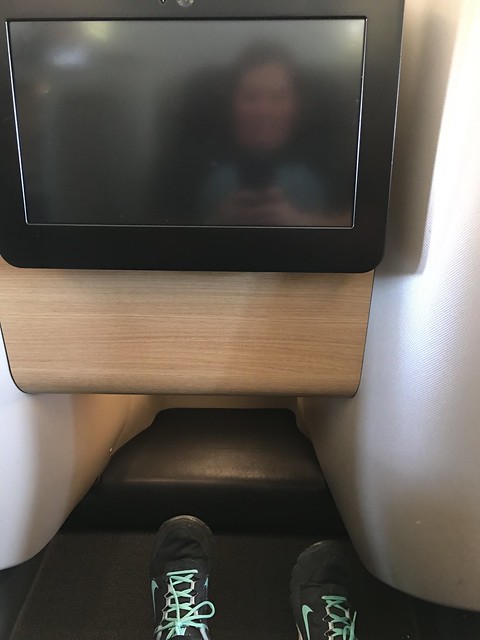 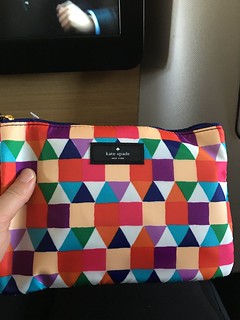 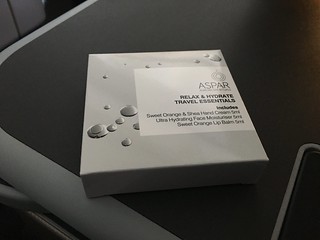 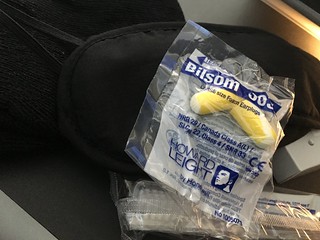 We couldn’t hide the fact that we were virtually newbies and just giggled, took lots of photos and high fived each other constantly – even the hostess noticed and had a happy conversation with us about how cool it was. Taking off, we settled down to wait for dinner. 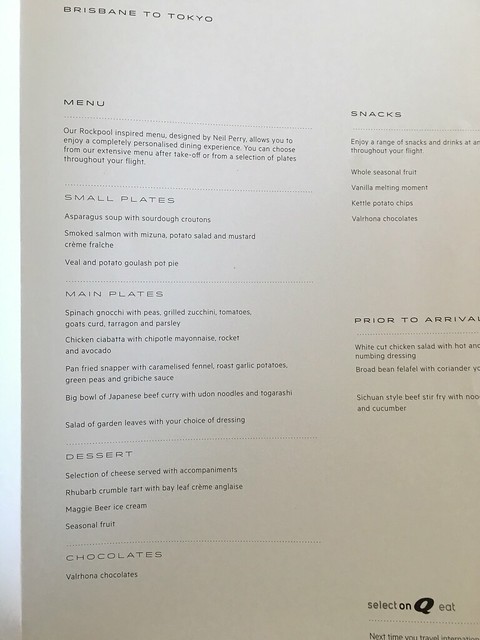 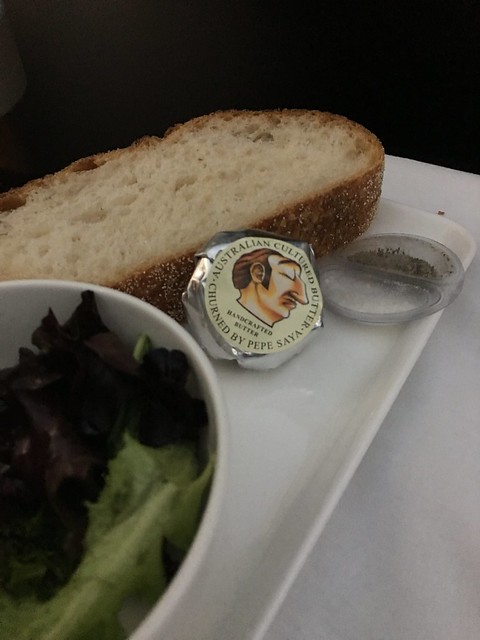 But it was the Asparagus soup with sour dough croutons that was the absolute highlight of the meal for me. 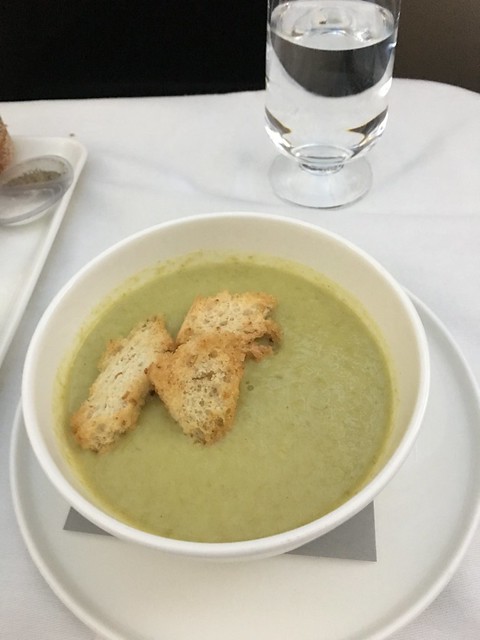 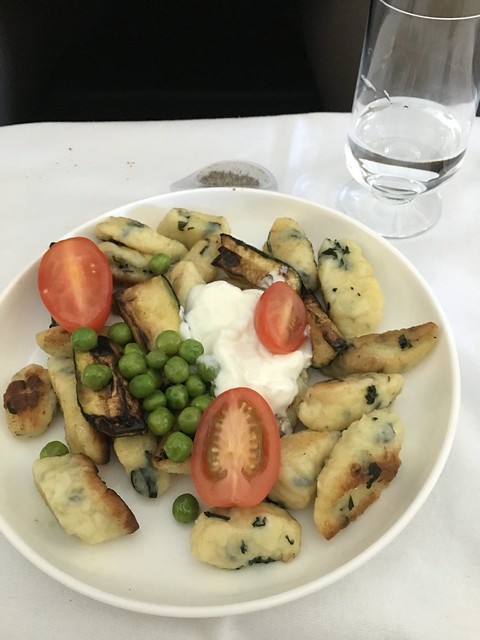 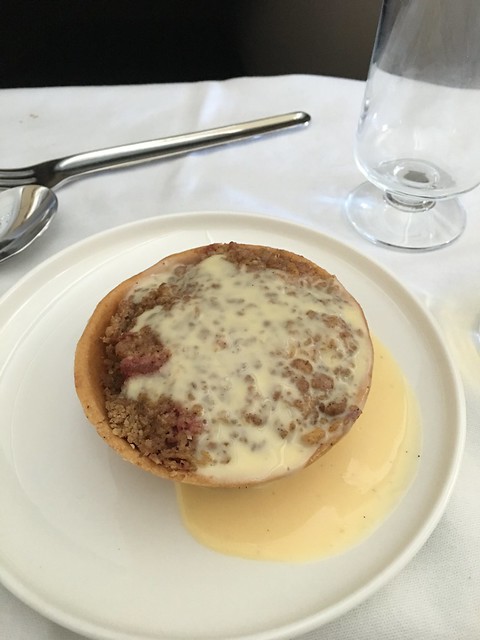 After the most amazing flight I’ve ever taken we landed in Narita and did the relatively quick entry to the country through customs. Uncertain how to find the JR shop to exchange our pre-purchased JR rail tickets in to passes we were directed downstairs to the trains by the ladies at the information desk where we found the obvious JR Pass store. There was a huge line that wound its way through the store which we assumed was normal, but now I’m not so sure. It turns out there was a derailment on the JR line which meant that there were no trains running. Not the worst issue though as there are muttiple train companies with different lines that service Narita. We got our pass activated for the next day then headed over to the skyliner to purchase a $61 ticket to Tokyo. We had planned to take the more inexpensive NEX train but it wasn’t operating due to the derailment.

It must be said at this point Claire and I had lost our business class zen and were struggling trying to understand everything that was going along while also trying to activate the data on our phones. Frazzled, we dragged our bags down another level to the skyliner platform.  We then jumped on the next train that arrived, without checking it first. This was one of the stupidest mistakes I’ve ever made – especially when you see the trains. One looks like it’s from the future, the other is from the 60s. Somehow we got on the 60s train (the yellow one).

Claire made the comment “I don’t think this is the right train” just as the door shut. We were like – oh shit, we’ll just get off at the next stop, but as the train just kept going and going, our dread got bigger. This is what we looked like when we realised: 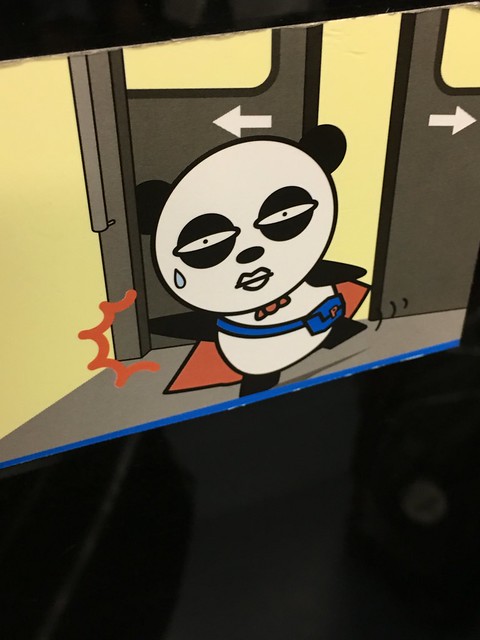 Eventually the train stopped and we headed back to the return platform to go back to Narita. Unfortunately, there wasn’t another train heading back that way for an hour.  We felt a little better knowing that another couple had made the same mistake as we did, but we couldn’t compare notes as they didn’t speak very good English and we didn’t speak very good Chinese. Instead we just smiled sheepishly at each other knowing we were all dopes stuck in the middle of nowhere (I had already checked the situation outside the station). But look how clean the railway lines are! 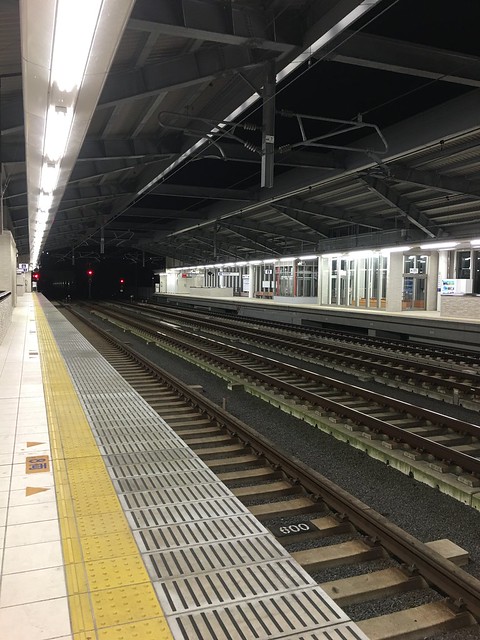 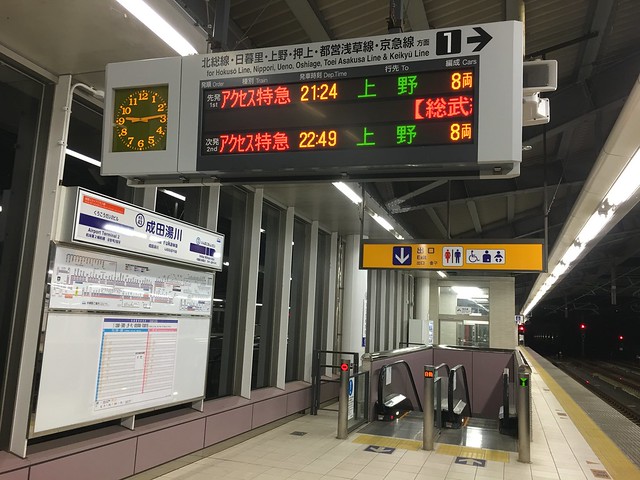 Given that it was about 9pm and the trains stop around 11pm we decided to take the next train heading towards away from Narita that was due in only 30 minutes. We read the train map for a good 10 minutes before we figured out the train we had been on was also going to Tokyo, just 10 times slower and 10 times cheaper. By this point we also had internet which backed up what we had learned on the board. 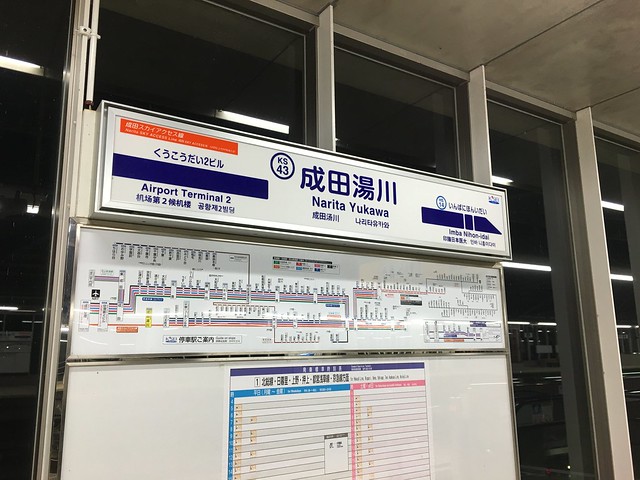 Eventually the train arrived and before long Japanese houses, lights and signs were flying past the window – not just a Disneyland style version of Japan – the real thing which actually looked like a fake version – if that makes sense. After about an hour we dragged ourselves through Tokyo station – learning that their machines take more than one ticket at a time, then headed out in to the Tokyo air to the hotel. It was a couple of blocks away, which isn’t much but seems a lot at 10.30 at night. Claire still wasn’t convinced that Japan was a safe as I thought , but I kept an eye out for the Yakuza for her sake.

We happily arrived at the hotel (Courtyard by Marriott) and were greeted by the desk who spoke great English. The lobby was pretty, the room was pretty big considering we were in Japan and the shower felt great. We fell asleep quickly with the plan of heading to Kyoto early the next morning. 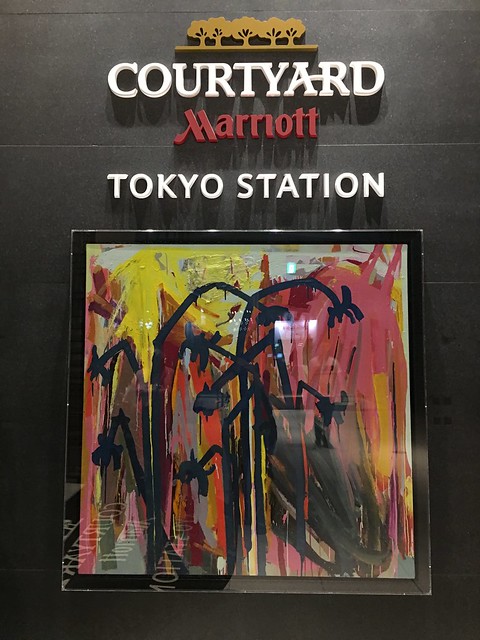 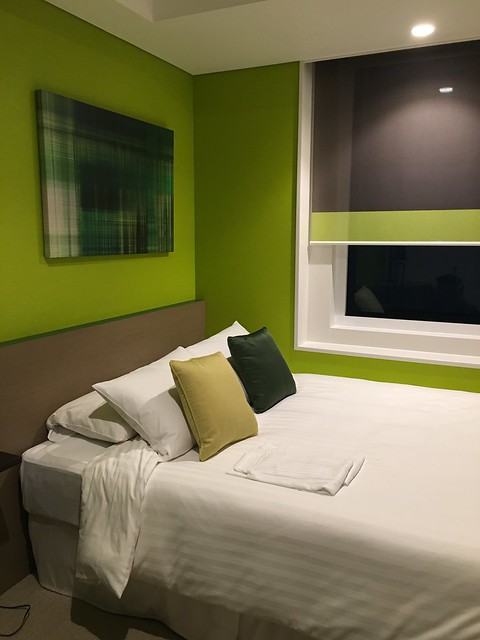 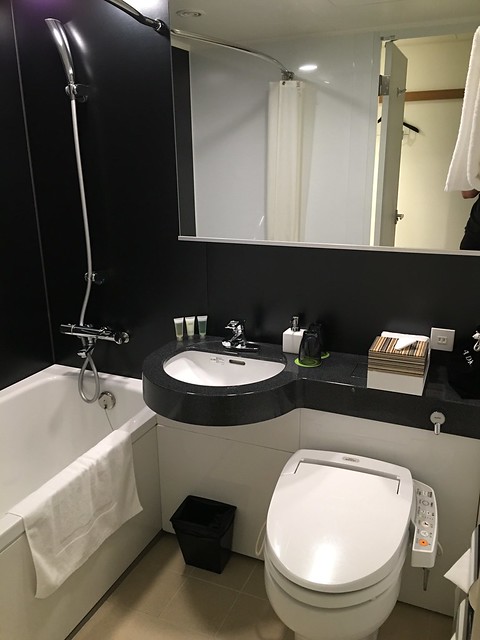