Sleep came easily at the Courtyard by Marriott near Tokyo Station, but we knew it had only been a short stay when the guy who checked us in also checked us out. It takes about three and a half hours to get to Kyoto from Tokyo by Shinkansen (Bullet Train), so we wanted to get an early start. But first, I looked out the window to see the japanese ghost busters. 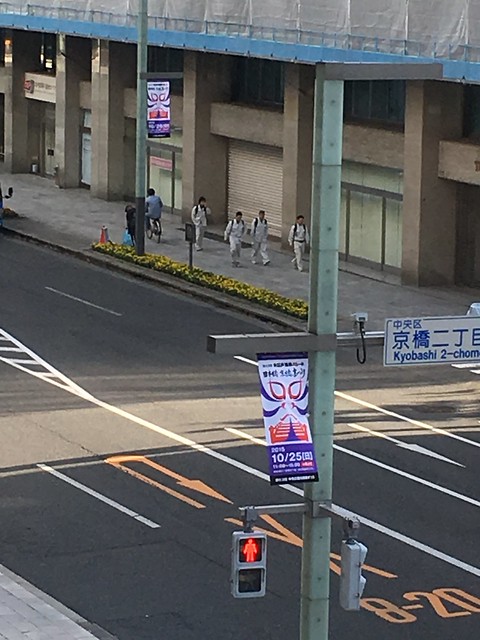 It turns out we may have started a little early as Tokyo Station itself was only really waking up. We headed to the JR Ticket Office to book a reserved seat in Green Class for Kyoto. We had the office all to ourselves and found it really easy to book the ticket  with the man at the desk. I had installed an application called Hyperdia that has all the timetables for Japan on it. It helps when demonstrating your requirements. Reserving a seat isn’t necessary but it always pays to do it if you have enough time. Now that the important part was sorted, my hunger started to dominate the agenda.

My hunt for breakfast in the station took us in to the food corridors below the trains where there are lots of little food shops, but they were either not quite what I was looking for, not open, or just starting to make their ramen broths or noodles or whatever their specialty was. I’m sad to say that my hunger sent me to McDonalds for a coffee and sausage and egg mcmuffin, but it was the most perfect one I’ve ever had. It looked just like the picture and the muffin bread itself was incredibly fluffy. I’m ashamed that my first meal in Japan was McDonalds, but if that was a sign of the quality, I couldn’t wait to try real japanese food.

Eventually it was time to head to the platform and wait in the designated section for our carriage. We made the mistake of putting our seat reservations through the gate machine which meant they got stuck. The gate attendant must have been used to it and opened the machines to return the tickets. Turns out all you have to do is show the JR Pass to the gate attendant and the seat ticket to the conductor. Our luck at catching trains like a pro was 2-0 to the trains at this point.

Upstairs I decided to buy some lunch for the train trip so ducked in to Delica Station while Claire minded the bags. I had read that the train platform food stores supply some great food, so I thought I would get some Pork Loin Cutlets. I found it cool that the lady counted out my change for me in japanese even though she probably knew I couldn’t understand a word. Meanwhile the train was pulling up and Claire was looking a little concerned that my dilly dallying was going to make us miss the train. 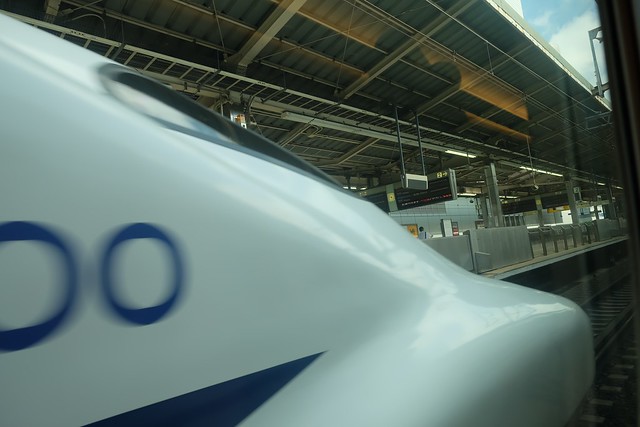 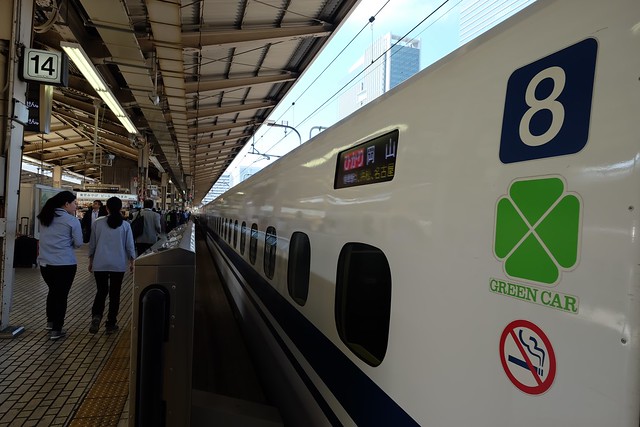 We got on and got settled in our assigned seats and were immediately impressed by the quality of the train. 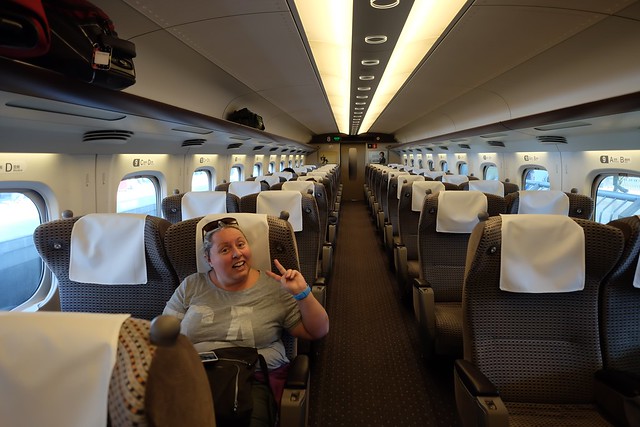 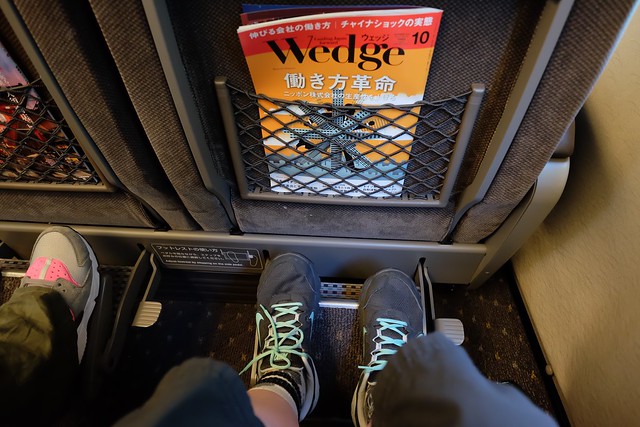 But the toilets were huge too 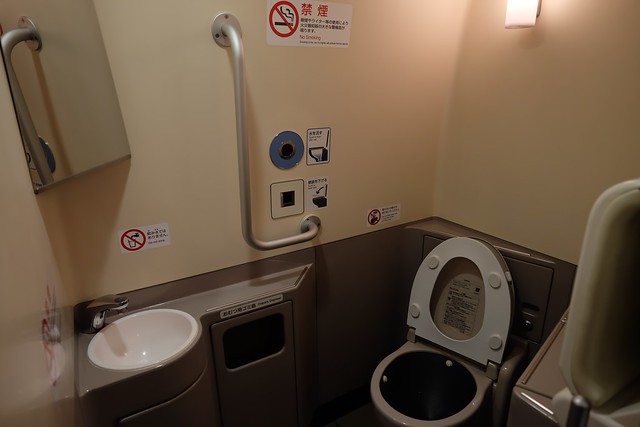 There was even a phone booth! 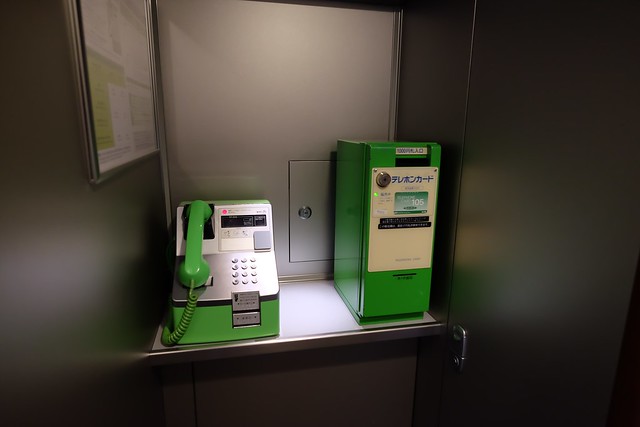 I ducked my head in to the economy seats for a sec which didn’t look half bad either. 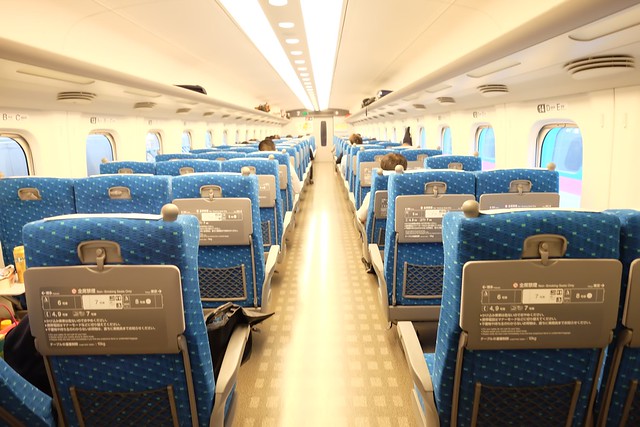 We were in awe of how sleek the train looked and smooth the ride was. I was a little peeved that Japan had been enjoying this sort of high speed and luxury travel since 1968, while the closest thing Australia has is the tilt train that goes at around 120 kms an hour since it was hobbled from it’s 160 km original speed. Oh Japan, your engineering and design focus is a wonderful thing.

We enjoyed the scenery going past 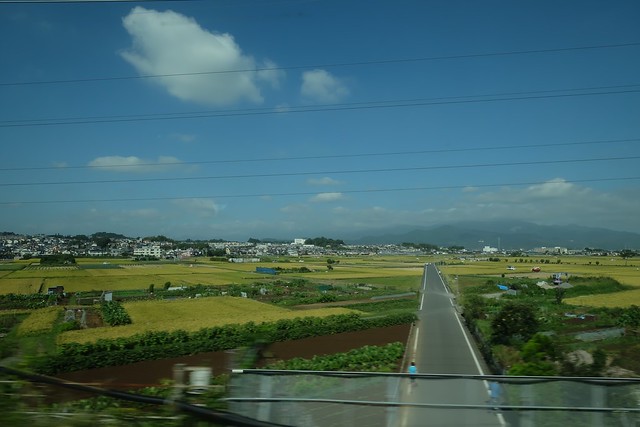 and we were lucky enough for the shy Mt Fuji to make an appearance through the clouds just as we passed by. She even took her snow top off! 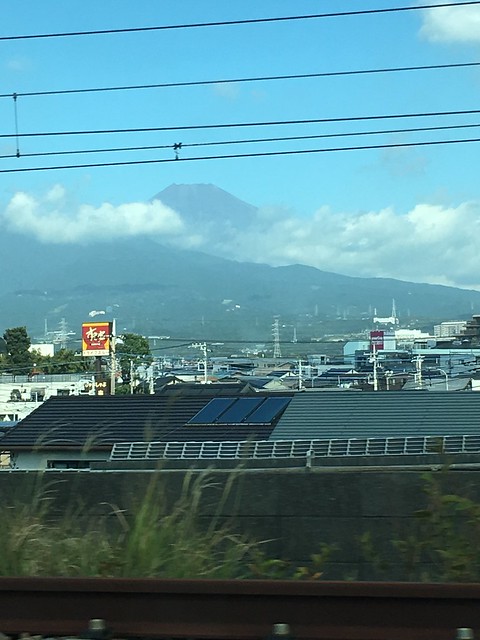 Eventually I cracked open my Pork Loin Cutlet Bento box, intrigued at what would be on offer and the quality. 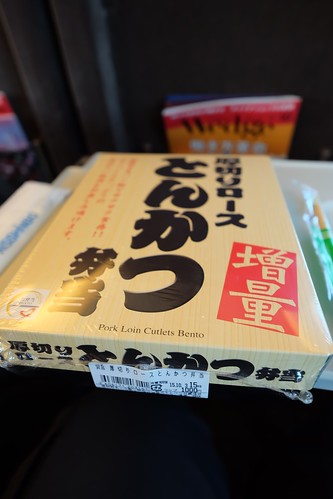 I was not disappointed – it looked and tasted fantastic. I can’t say I was a fan of the sour plum, but I guess it isn’t for everyone. 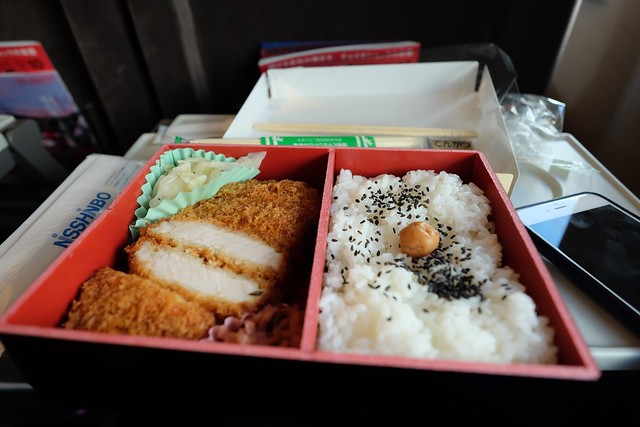 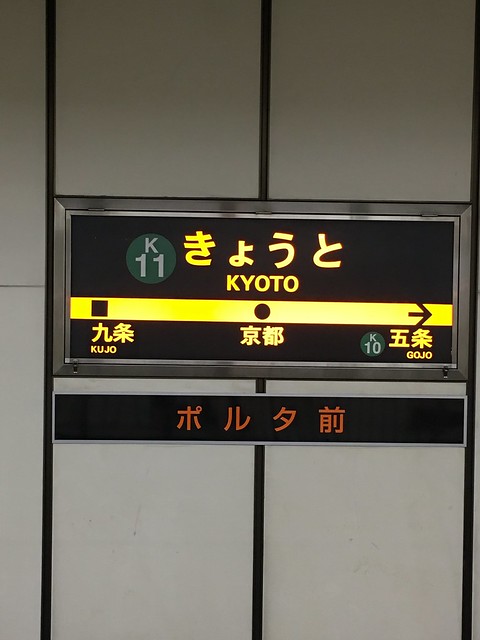 We could even see our hotel from the train line 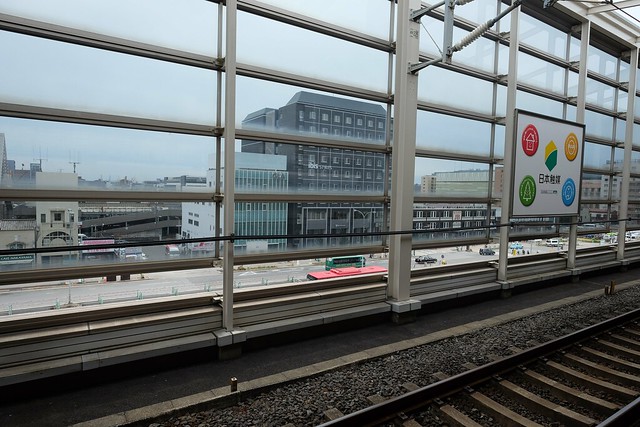 I had kind of stuffed up the booking of our Kyoto Hotel, I’d done months of research, made a shortlist of my favourites and then a month before we were due to arrive I went to book and discovered that all my favourites had gone and there were only less than satisfactory options left. Thankfully we managed to wrangle a small room at the Ibis due to our Accor loyalty and it was in a fantastic position in terms of our ability to transport ourselves around Kyoto. If you are looking for old style laneways and japanese homes, it won’t be found in this area, but it placed us well for the connections we planned to make. It seems that weekends are a super busy time for Kyoto, so if you are staying the weekend, book well ahead of time otherwise you might be pushing it.

We were a bit too early to get our room, but we were able to check in and dump our bags before we headed out to Kyoto. After some minor struggles with the ticket machine we bought subway tickets to Nijojo-Mae station to visit the Nijo Castle. On the subway we were incredulous when we saw little Japanese kids taking the train without their parents, which is awesome in so many ways. We also saw a couple of dogs being transported in bags which made us jealous that Elvis couldn’t be with us too.

Out of the subway we crossed the road to be standing directly in front of Nijo Castle. Nijo Castle was once the residence of the Tokugawa Shoguns, but now is just a place for tourists to go and imagine what it was like 1626. 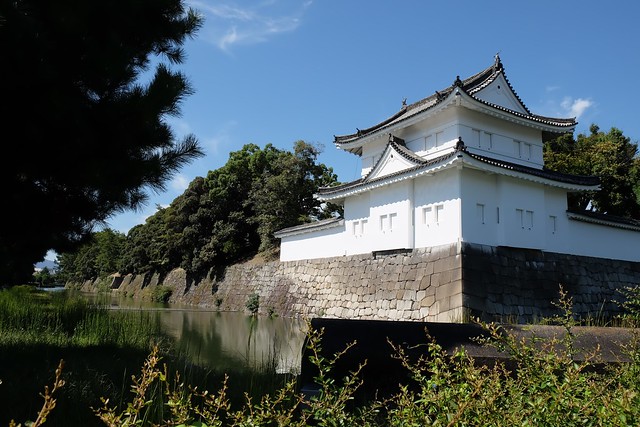 You can tour the main building in your socks 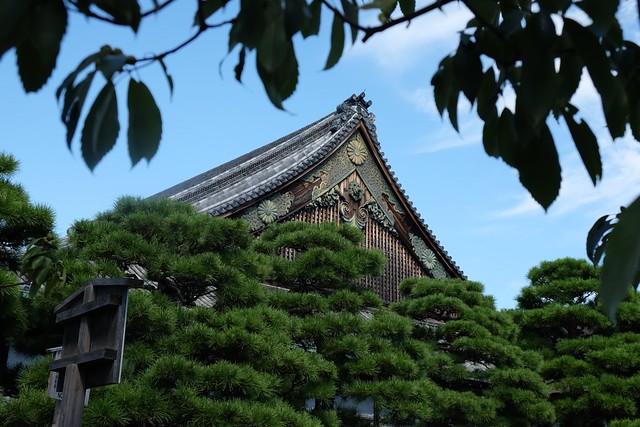 and experience the serene gardens with your shoes on. 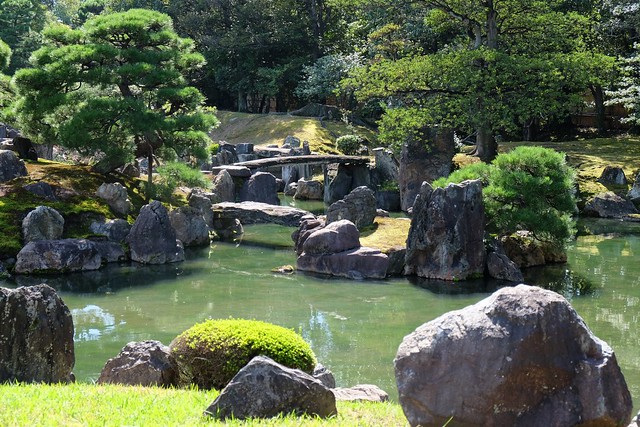 After we had finished at the castle, we headed back to the hotel to get our room, unpack our bags and have a bit of a rest. We decided that we would go to dinner in Gion which is known for it’s fancy eating houses, but it’s primary appeal is that this is where you can find real life Geishas. This was the location of Memoirs of a Geisha girl and I was very excited to see it. Emerging from the subway at dusk we headed over the picturesque river to a small laneway that runs perpendicular to the river.

The laneway is called Kiyamachi Street and is packed with restaurants. We wandered from menu to menu with Claire in charge of picking the restaurant. 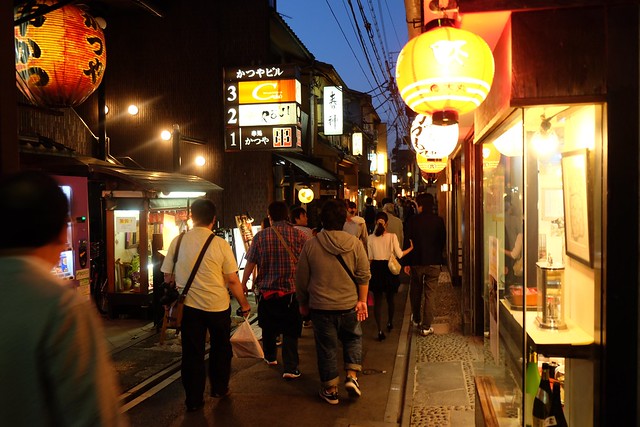 If you looked hard enough, you were able to catch peeks of ladies in traditional japanese clothing 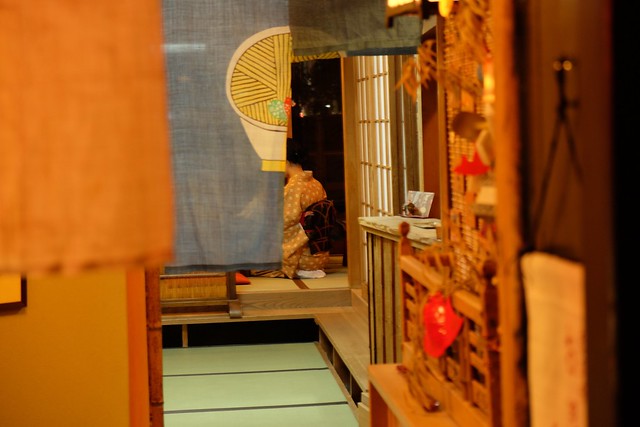 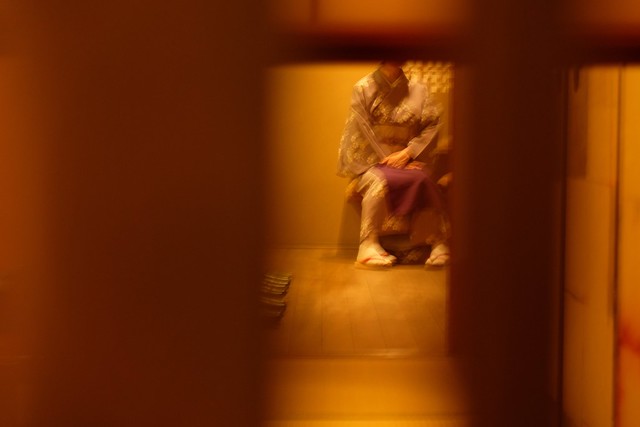 Claire picked a restaurant (Yuzumoto Kyoto Hontocho) that specialised in Yuzu which is type of citrus fruit. It was a typical japanese restaurant with only about 12 seats and the chef prepares the dish in front of you and when I say prepares, I mean he even cuts the vegetables freshly before they are put in the pan. There were three staff and they all manage the cooking, cleaning, and bills. The food was fantastic as well as the Yuzu flavoured drink I ordered. It was the most perfect introduction to a Japanese dinner we could have imagined. 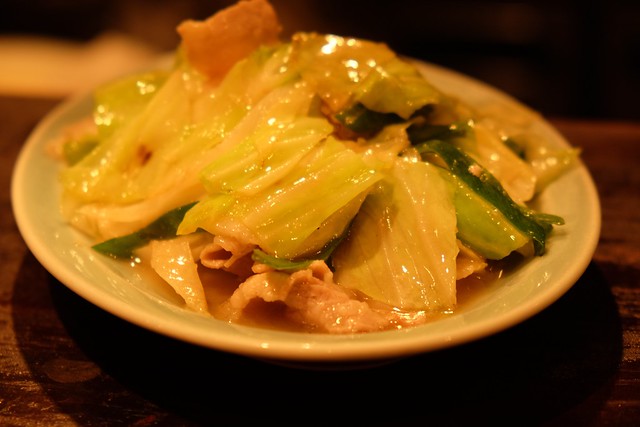 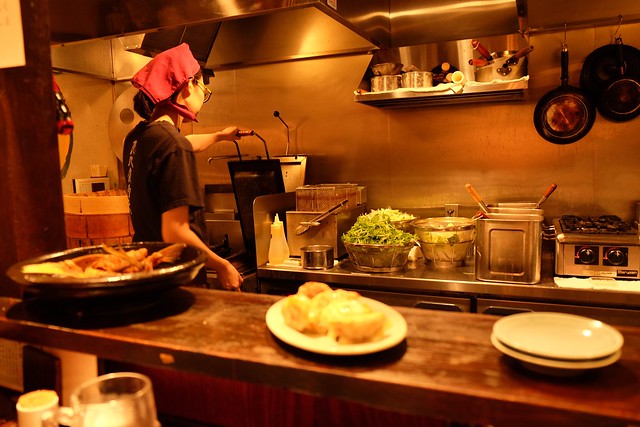 After dinner we headed back in to the streets and wandered the Gion streets looking for geishas. I’m not sure if this lady was one, but she was being thanked by the men and then escorted off to somewhere else, so my guess is she was – or maybe one in training. 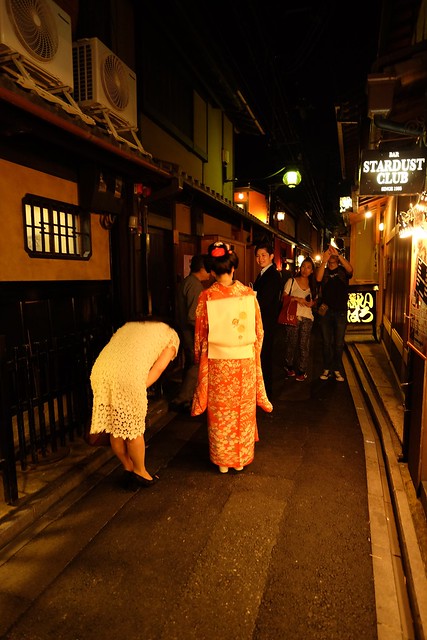 Gion is truly a place unlike anywhere else and Kyoto was already invading itself in to my “most loved places” list. 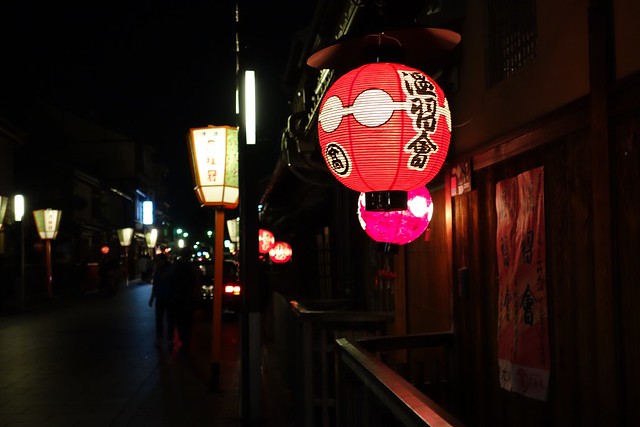 Being completed knackered, we headed back to the hotel for bed.