Knowing that we were leaving Kyoto for Osaka later in the day, we got up early, had breakfast, checked out but left our bags at the hotel and headed for the train station. We weren’t heading for a bullet train, we were making our way to the local JR train to take us to Arashiyama which is a district about 25 minutes from Kyoto Station, but a world away in terms of scenery. The train deposited us and a few other tourists at the station surrounded by typical Japanese suburban houses, but with helpful signs to get to the Togetsukyo Bridge. The town was still sleepy as it wasn’t yet 9am and we walked some back lanes checking out the houses, watching ladies take dogs for walks and crossing over the train tracks – which were plentiful considering the amount of stations in the area. 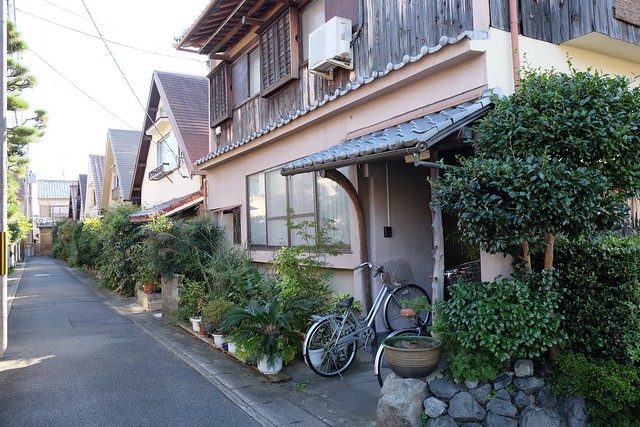 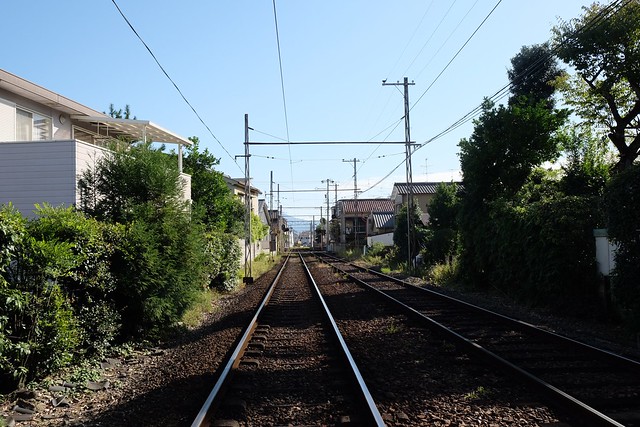 The Togetsukyo Bridge is a well known bridge in Japan that is also called the moon crossing bridge. It was originally built some time between 794-1185 but rebuilt in the 1930s. Like a few of the Japanese families around us we stopped to take a bunch of photos and I had a fleeting wish that we had arrived a couple of weeks later so that we could see the red and orange leaves of Autumn as a backdrop – we were just a little too early. 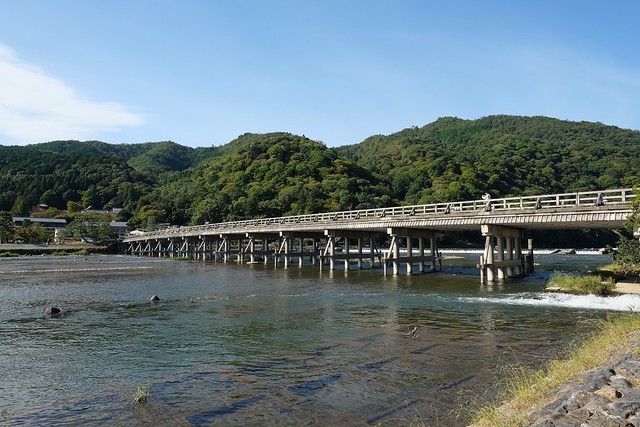 Turning away from the bridge and heading up a few side streets, we passed some restaurants, a different pretty train station to the one we arrived at and a cool old car with a panda in the back. 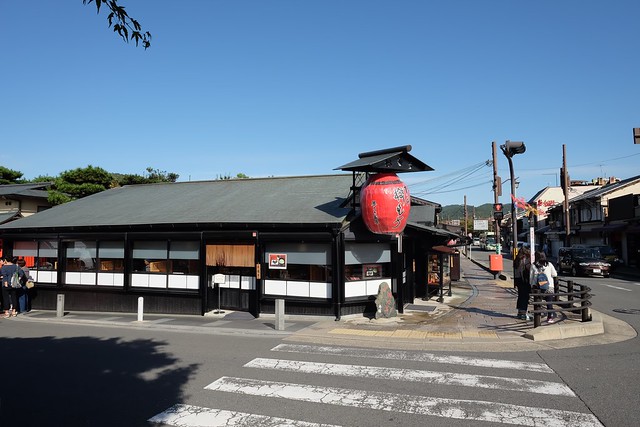 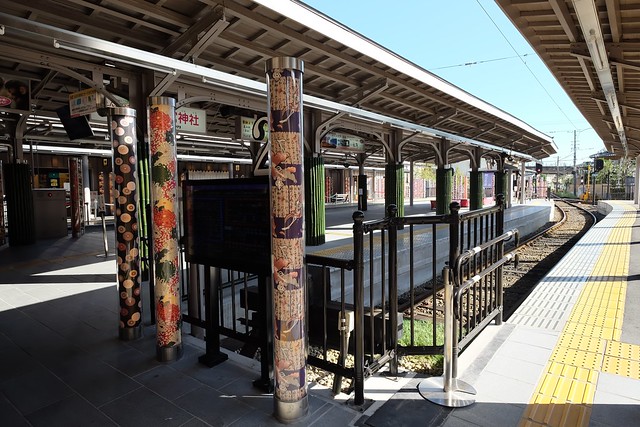 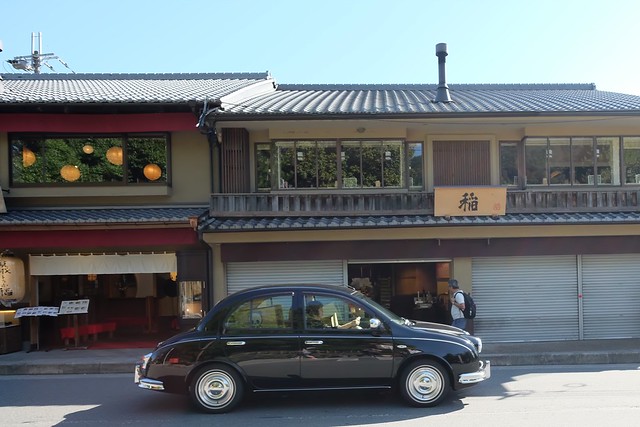 We had seen enough temples the day before, so didn’t stop in at the couple we walked past – our primary destination being the Bamboo Groves. The Bamboo Groves are a popular destination for tourists and welcome reprieve from the city. It’s a cool and relaxing walk that winds it’s way through the bamboo trees, eventually ending up at Torokko Arasiyama station. 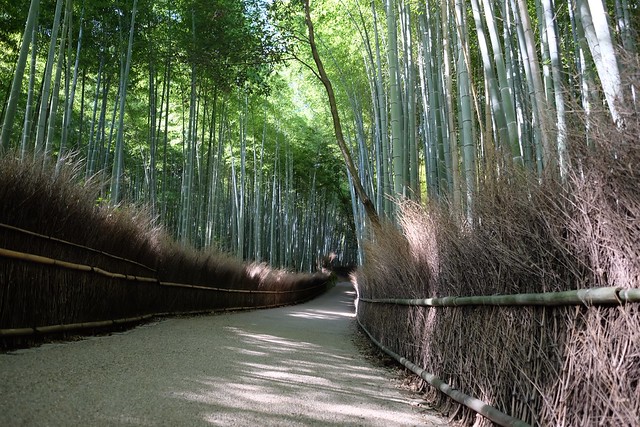 We had only learnt about the Sagano Railway the night before, so we were impressed that we had sort of accidentally ended up at the second station on the line. The railway is also known as the Romantic Train. We had to wait about 30 minutes for the next train to arrive, but we were early enough to make sure we got an assigned seat on the train. 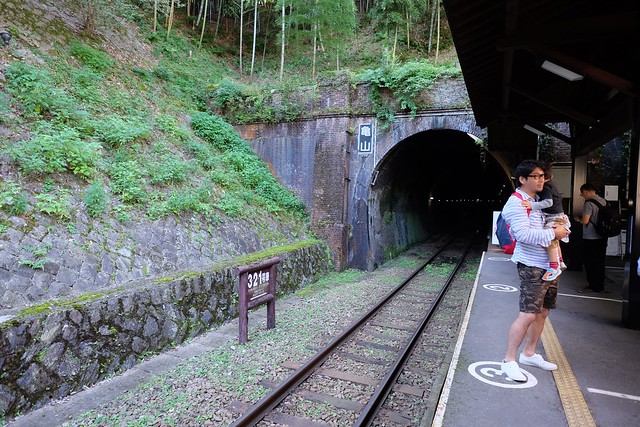 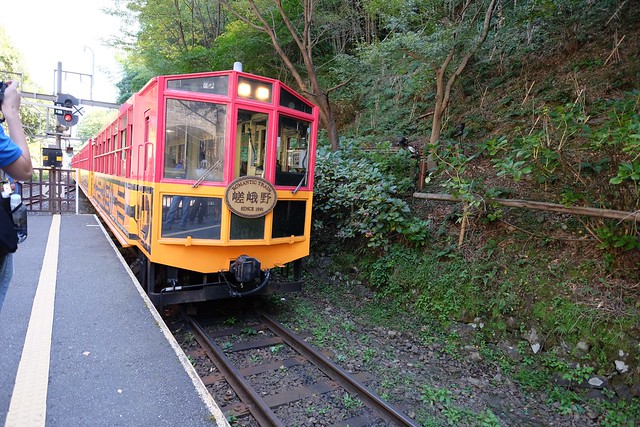 The train eventually arrived, we squeezed our big butts in to the small seats and headed off through the tunnel, only to emerge in what looked like the Canadian Rockies. The train was open roofed, which provided wonderful views of rapids, woods and boats floating down the river. A common trick is to take the train to the end of the line and the boat back to Arashiyama, but we didn’t have enough time for that, so were just planning to take a normal JR train back to Kyoto. The scenic railway was breathtaking and we just couldn’t stop taking photos and grinning. It was just so unexpected and beautiful. 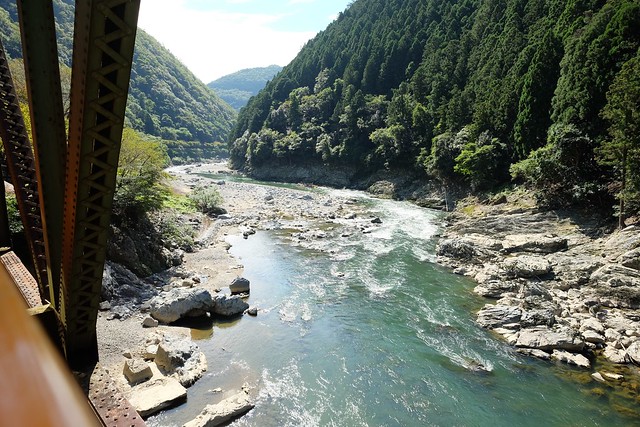 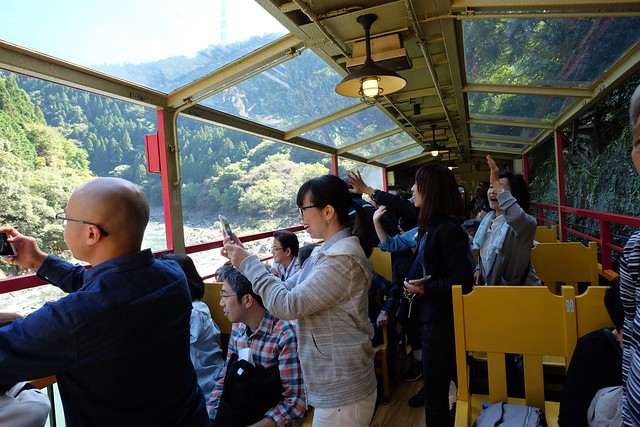 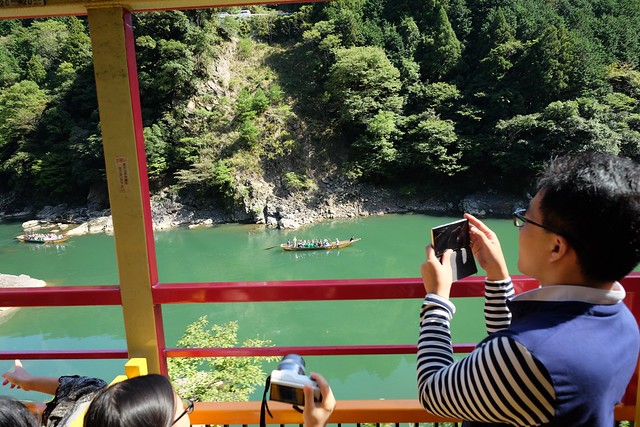 The train dropped us off in a bunch of rice paddies, but also a bunch of tourist attractions like horse carts, fast boat rides, slow boat rides and of course the tourist shop. We navigated our way through the throngs of people waiting to get back on the scenic train and followed the signs to the JR station to head back to Kyoto. Arashiyama was a lovely little break from Kyoto and a great way to see some of the incredible natural wonders Japan has to offer. 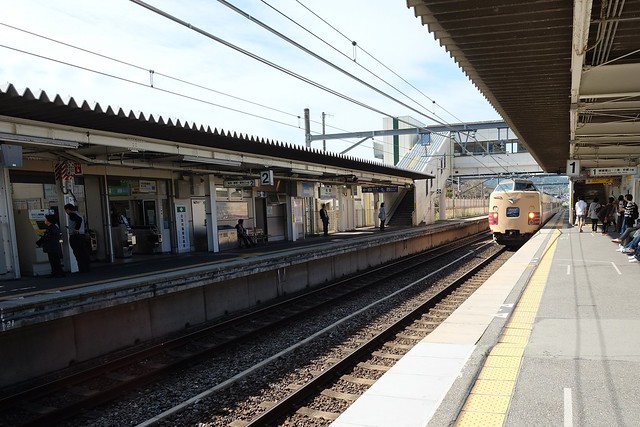 Back in Kyoto we had some ramen for lunch in the station, then picked up our bags and headed for the Shinkansen. Osaka is 15 minutes from Kyoto on the bullet train, but it deposits you at the outskirts of the city at Shin-Osaka, which means you have to switch to the subway and catch another train for about 30 minutes to get to the centre of town. 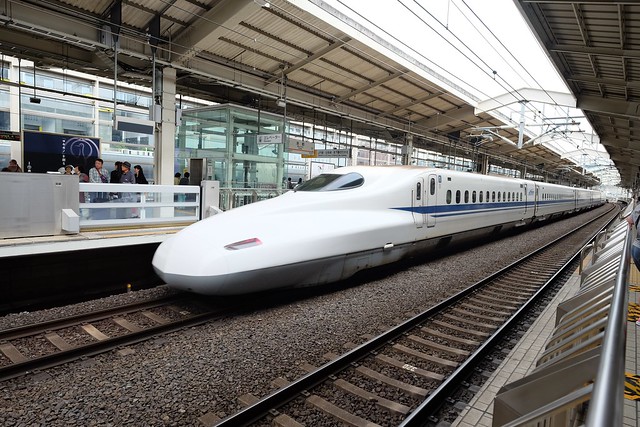 We had booked a good deal at the Swissotel Nankai Osaka, primarily because it was very close to Dotonburi (our evening destination) and it was also above the Namba station. We were only spending less than 24 hours in Osaka just to get a taste, so we didn’t want to spend a lot of time in transit. We arrived early and had to wait in line and I’m not sure if that was the reason, but somehow we were upgraded to a suite with club room access. Fantastic! The room isn’t the kind of style we prefer, but it was huge and had amazing views, plus a makeup nook. 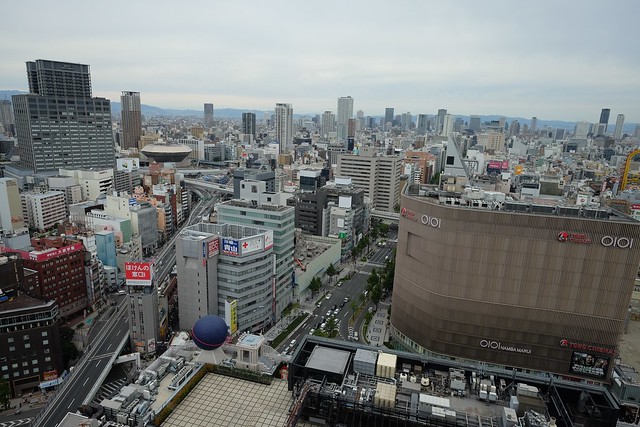 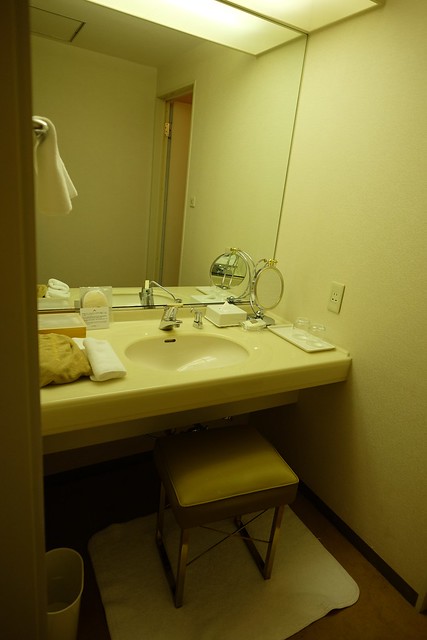 Claire’s feet were in a lot of pain, so we relaxed for a while, then headed up to the club lounge to relax a bit more. The lady on the desk at the club was incredibly helpful in pointing out the local attractions and the main shopping street, which was virtually across the road from the hotel. We decided to head out to check out the department store across the road, but quickly found we were knackered, so went back to the room again to chill for a few hours before going out. I watched a bit of the Hunt for Red October while Claire dosed, then we headed back to the club room for a cocktail and some nibbles to watch the sun set – the land of the rising sun giving us an amazing setting sun viewing. 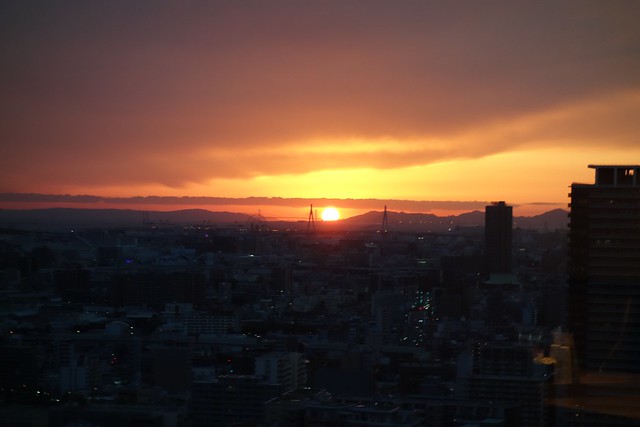 Refreshed and ready for action, we headed down to Shinsaibashi Shopping Arcade which we had already skirted the edges of earlier. This is the major shopping strip of Osaka and cuts through Dotonburi which is the main eating area of Osaka. Our main aim was to get Claire a new pair of sneakers to provide relief from the ones which were giving her grief. This was not difficult considering the amount of sneaker shoes. In many ways this area was like Times Square in New York, all shops, restaurants and tonnes and tonnes of Neon. It sort of gives you this element of adrenalin and you find energy reserves you didn’t know was there – all just from the lights, the noise, the people and the hustle and bustle. We found some shoes, bought some Garrett’s chicago mix popcorn, marvelled at the lights (and the famous Glico Running Man) and just observed Japanese people going about their nightly business. 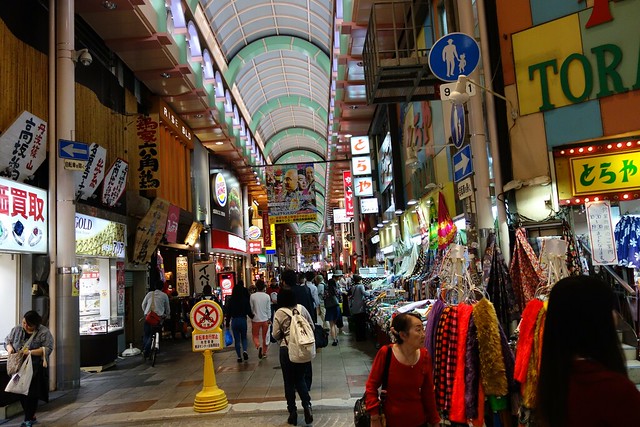 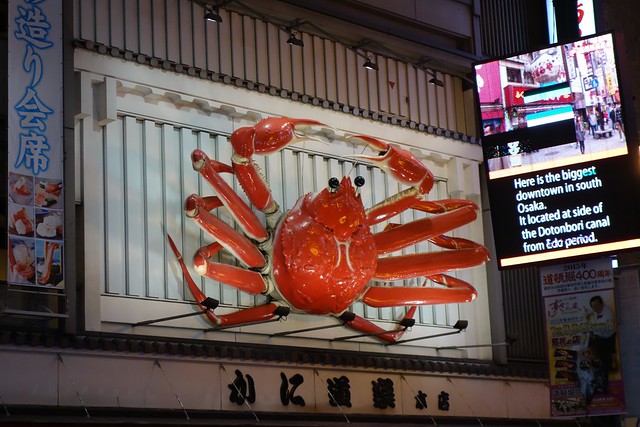 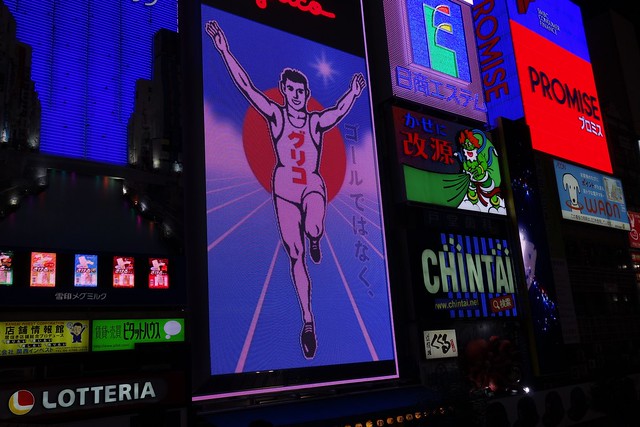 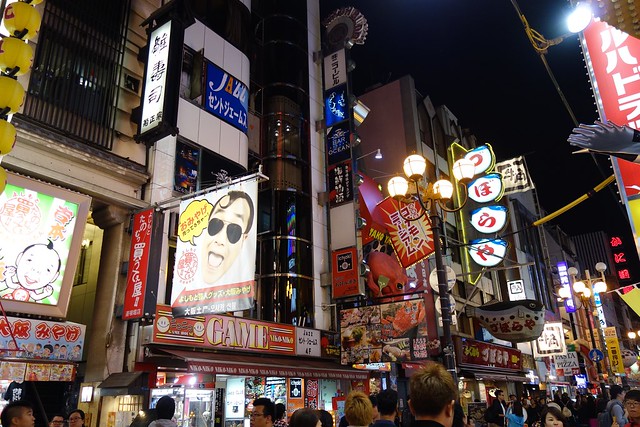 Feeling a bit peckish, we decided to try the Osaka delicacy Okonmiyaki. Given that Claire doesn’t like egg, we were a little bit concerned, but the wikipedia entry didn’t mention egg as an ingredient. We lined up outside Mizuni Okonmayaki, one of the best okonmayaki makers in the city. We arrived just in time so that there were only about 8 people in the line in front of us. You pick what you want outside by reading the menu while in line, then once you make it through the door you order the meal and eventually by the time you sit down they are ready to cook it right in front of you. I was having difficulties understanding what you actually get when you order – I thought there would be multiple fillings, but the guy set me straight. Claire ended up with a pork one, while I picked scallops. 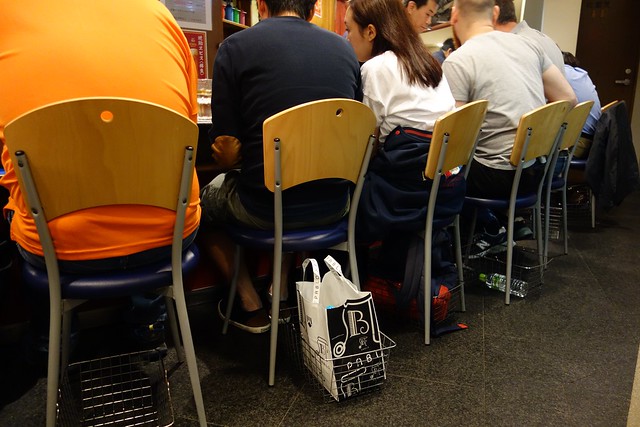 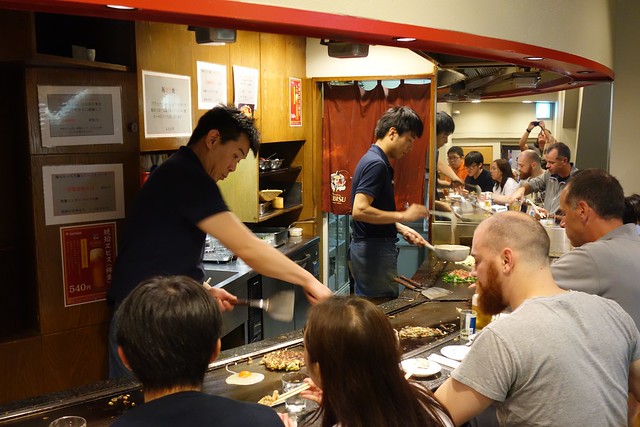 Things didn’t start well for Claire when she saw the eggs being whisked in front of us, but she said she would give it a go at least. It kind of sucks that the chef is proudly cooking in front of you and you know that the enjoyment of the meal is going to be a problem due to the ingredients and a misunderstanding – nothing to do with the chef’s skills. When the food is finished cooking, it is covered with mayonnaise and sauces, then you just cuts bits from it and stick it on your plate. It was immensely filling and enjoyable, but after a bite from Claire we realised that I was going to have to try and eat both to be polite. I gave it a good go, but it was impossible. 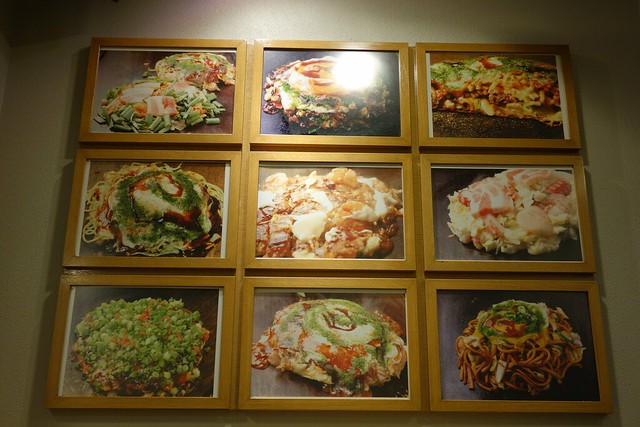 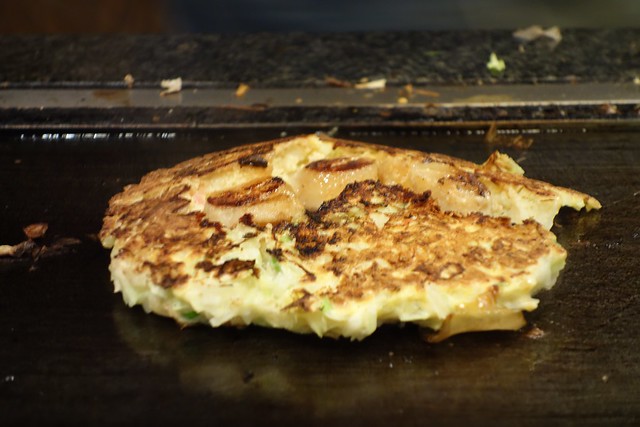 In retrospect we should have just ordered one after seeing others do that (we didn’t think we could) and that way if we didn’t like it, we wouldn’t be rude and wasteful. But you don’t know until you try it. By the time we left, the line up was still long, but there was a closed sign at the end, meaning they now had enough people in the line to be busy for the rest of the evening. 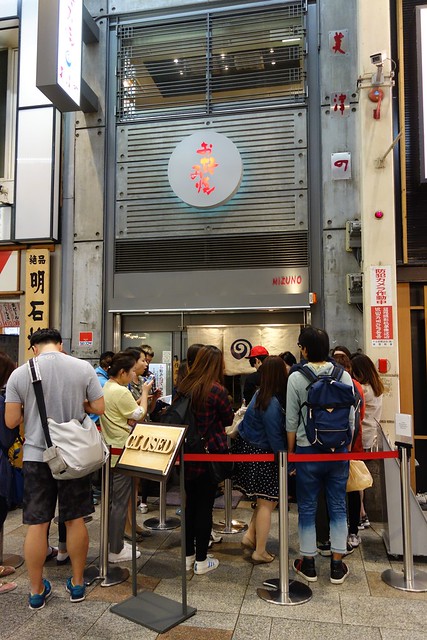 After dinner we wondered past an arcade and couldn’t resist stopping for a drum game which became Claire’s new obsession. 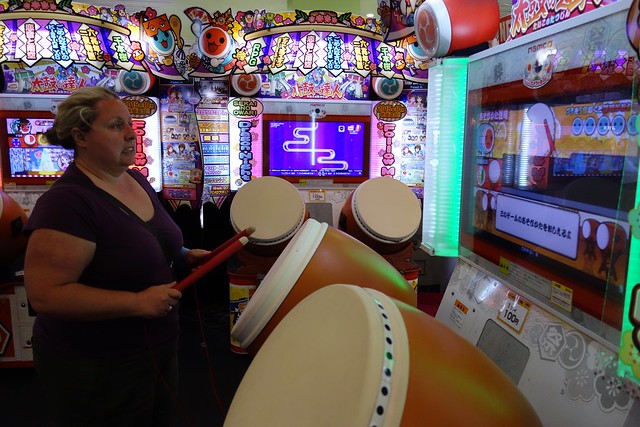 Then it was back to the hotel for bed after an exciting evening of Osaka fun.