The 8 of us met in the lobby of the Paramount Apartments to find the breakfast cafe together. This meal was included in the price of our accommodation so we were able to get a continental breakfast in the cafe in the shopping centre. Continental means coffee, tea and a croissant, toast or cereal. Normally Auntie Sue is the one missed when we order food but today was my day to be overlooked. I thought toast wouldn’t be to hard compared to the eggs and stuff everyone else added to their order – sadly I was wrong. I considered sending Kelly the hardassed shopper over but mustered all my courage and pointed out their mistake. In the end I scoffed down my breakfast while everyone else was leaving.

To start the day off we had to split up as Mum, Pauline and I went to drop off the car 4 streets away. We made plans with the others to call when we got near them as they were heading for David Jones and Myers in the Bourke St mall. We succeeded in our mission to rid ourselves of the car and after filling the tank, parking it in the underground carpark, having it inspected, signing off on the deal and walking to the bank we had killed about 20 mins. We meandered our way to the mall and noticed the line up for the window display in Myers. The theme this year was based on the movie “The Polar Express”. I hate these cross promotion things so much. I virtually know the whole story of the film and I’ve only seen the trailer and this window display. Why bother going to see the film now? Right at the end there was this gargantuan boy and girl with scary heads that moved. It freaked me out so I don’t know how little kids would react to it. Is this some kind of evil plan to give kids nightmares?

While we were going through the display we ran in to the others who had only just made their way to us. They’d spent most of the time we were apart in the accessory store being girly girls. Bags, necklaces and bangles had been obtained and they quickly made their way in to the department stores so that they could find clothes to go with their accessories. I probably spent the next two hours being the handbag holder as we wandered from store to store. During this saga Kelly ditched us to meet her friend Brenna from the Sunshine Coast who was in Melbourne to see the Australia vs New Zealand netball match. I’ll let Kelly talk more about that in her blog but she had more fun than I did and even got to sit in the drivers seat of a tram.

Susan also ditched us to go have lunch with a lady from the solicitors office she works at so the rest of us headed down Swanston St looking for food. I’d seen some recommendations of the cafes at the new arts centre in a brochure I had but when we got there they were a bit more expensive than we required. I took a few pictures, some loo stops were made. We decided to cross the road and head back along Swanston to meet at the arranged spot near Bourke St. Crossing the road Madonna pointed out the Young & Jackson pub across the road from Flinders St station which has the famous painting of Chloe. We went inside, didn’t see Chloe, noticed the cafe menu and decided we’d eat here. Madonna and I order the light sampler to share, Auntie Sue and Fiona left in search of Subway and Pauline and Mum decided they weren’t hungry and would just drink. I had a cascade and a little bit of the best eggplant pie I’ve ever eaten. God it was yum. There was also sample of prawn wantons, chicken legs but nothing came close to the eggplant pie – especially mixed with the boccocini cheese that came with it. This was probably the first time in the trip I’d really felt relaxed but it may have been the second beer I had which was called Beez Neez. Since I was enjoying it so much I sms’d a few people that I knew would be working to brag about it. After eating Madonna bought a t-shirt of the pub and we went upstairs to find Chloe. She was painted in the 1800s and she only wears a bangle. I was mesmorised by the bangle as it was so vivid and 3 dimensional – almost like a photo. Impressive. She had been stolen at one stage but was returned to her rightful place. Mum said later that she could have spent the entire day there and I’m inclined to agree with her. 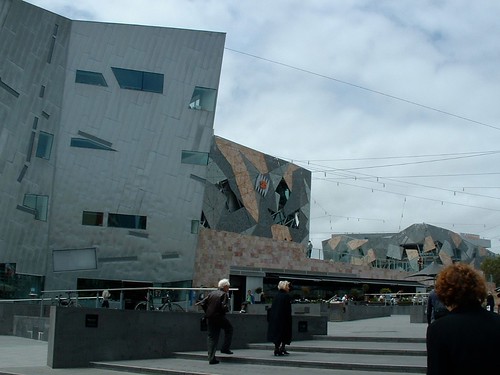 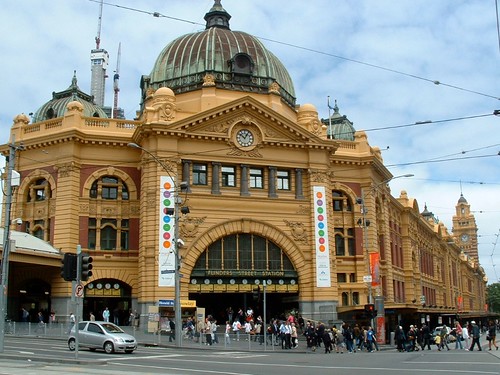 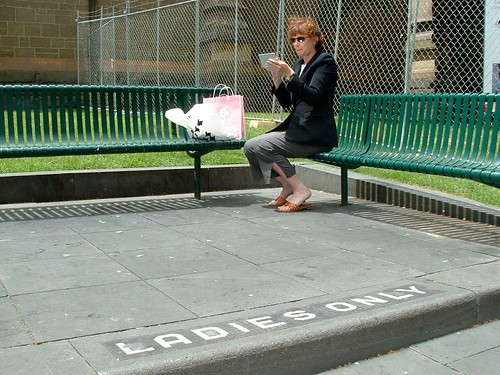 Since we were at Flinders St Station and right where we could take a tram to Chapel St we told Susan that the meeting point had changed to Flinders St. We caught one of the lovely new low windowed trams which gives you a large viewing area to check out Melbourne. As soon as we got off at Chapel St Madonna was off! She didn’t muck around and darted in and out of all the stores she found interesting. The rest of us ambled along at our own pace stopping at places we that peaked our interest. Susan bought her sons some t-shirts, I bought a mat for the bathroom from Holy Sheet and Mum bought a coffee at the coffee shop. Madonna had gone up the street and back by the time we made it to the end of the street so we told her to come back and we would take the other tramline back. 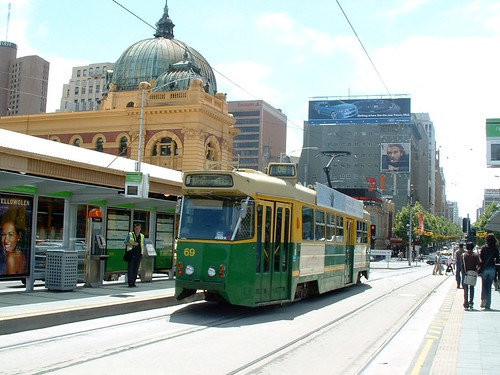 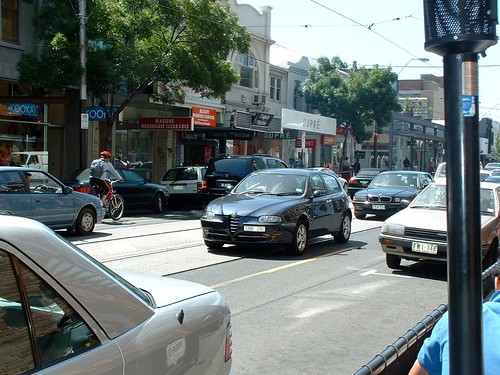 Back in the city we chilled at the apartment for a while until it was time to go get dinner. We walked over to Lygon St, Madonna shivering while we waited for Fiona and Auntie Sue to catch up. Once at Lygon St Madonna and Mum went in to bargain mode as they negotiated with the store owners for deals at the restaurants. The first guy was turned down because Pauline and I had been there before so they used his offer of two bottles of wine as a bargaining chip against the second restaurant. We only got that far because they were either easy, tired or hungry. Once in we set about getting our face fed, getting off our faces and facing a few home truths. Auntie Sue got drunk from the wine and the medicine prescribed in Lorne and managed to talk very loudly and humorously. Mum told Madonna stories to Susan, the whole table laughed at how there was an entire table of men not too far away (were they the masculine version of us?) and I waited for my meal to be served last AGAIN. The meals were nice, but nothing to rave about. 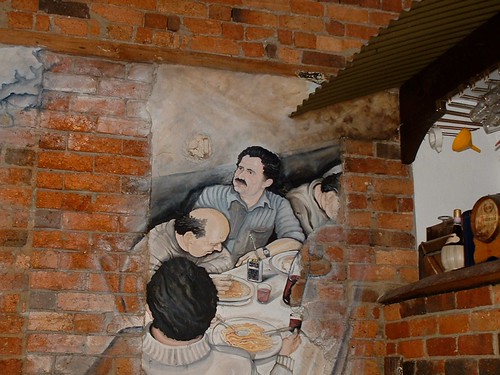 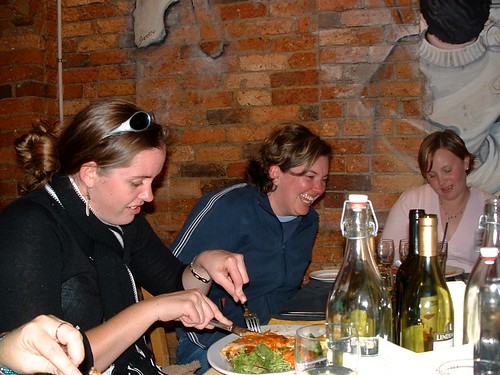 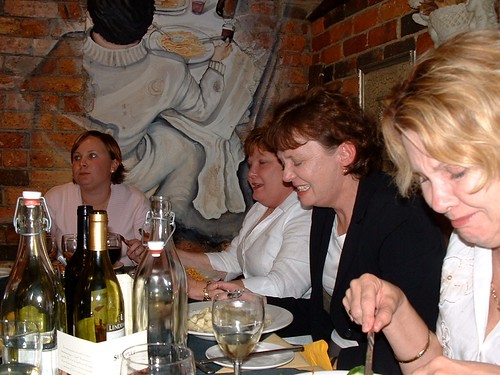 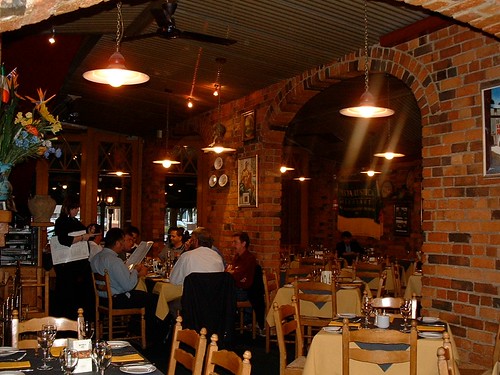 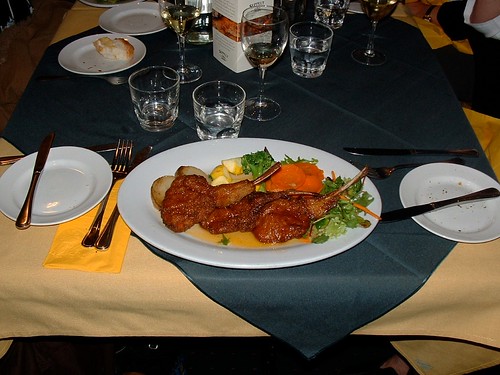 After dinner Madonna and Fiona took a cab back to the apartments while the rest of us took a tram to Crown Casino. Kelly and I were only going as far as the new Queen Victoria building as I wanted to sample the Max Brenner chocolate cafe that Kelly had been to earlier in the day. On the tram Pauline managed to knock a girl who kicked a poor guys model of a house that was on the floor when the tram took off. I don’t think it broke anything luckily. Auntie Sue and Mum then drunkenly and loudly discussed how to get to the Casino on the tram and everyone fell over themselves to tell them. They got all sorts of advice from everyone. Melbourne people are very friendly on public transport. Kelly and I left them still discussing it as we got off.

Unfortunately the chocolate store was closed, so we wandered around the empty Queen Vic building and checked out the lovely toilets they have. Very high class. We then wandered down the greek street which I think was called Lonsdale St and checked out the cake shop that was still open at 9.30 at night. I thought that was impressive in itself but it’s display was “awesome” as Kelly would say. Heading back to our apartment we passed a cool tiki bar that was selling interesting cocktails but we didn’t stop. Two asian guys appeared from a dark alley and slipped past us, probably quite innocently but my mind was thinking YAKUZA! Kelly and I found another alleyway that beckoned us and led us to the closed chinese museum. We emerged on the chinatown street so we decided to explore more. There were some large crustaceans and fish in large aquariums in all the restaurant windows and some dark rooms with low lights illuminating faces with headphones and game faces on – the internet/gaming cafe. Kelly and I rounded the corner, stopped to watch a guy drum on one of the drumming arcade games then headed back home for bed.

Unfortunately we had to stay awake to let Pauline in as she didn’t have a key. I had a bath to while away the time and then Kelly and I watched a bit of the Brazil vs Australia futsal game on tv. Pauline called a while after, I let her in and then passed out.

It had been another big day.