In the car on the way to the airport with my favourite airport dropper offers Pauline, Mum and Kelly. Told the dog to hang around this world long enough to see me again and got blown kisses from the cockatiels. I’m good to go.

Said the tearful farewells, made it hassle free through customs and am at the gate. The reality of being alone by myself for 6 weeks is beginning to sink in and the first thing I notice is that it’s very quiet. Wonder how long it is until I talk to myself. 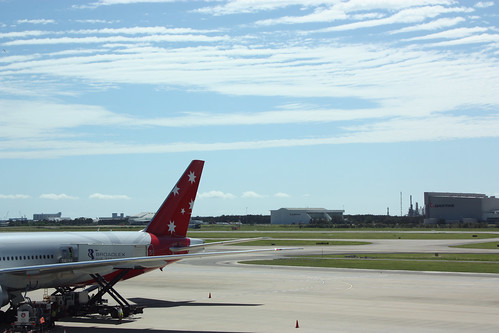 Someone took my seat cause they wanted to be with their friends but i said i’d swap and ended up with something better. Bonus! But we are running 30 mins late I think.

When flying it’s all about the media content and the food. With three hours to go I’ve done the movies Casablanca (classic), The Informant (Matt Damon) and The September Issue (which is about vogue magazine). I’ve read a book about travel health in case I get Malaria and I’ve eaten some beef cassserole (no chicken left). At this point I’m starting to get sore headphone ears and I’m wondering if the girl in the middle seat next to me is ever going to go to the toilet. 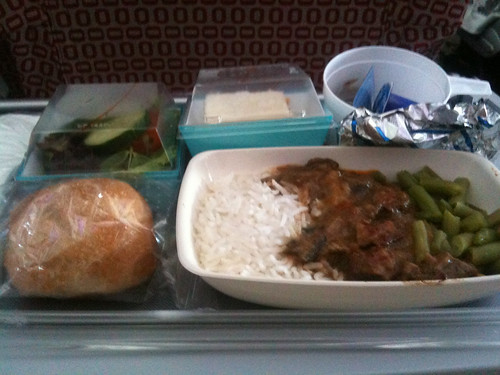 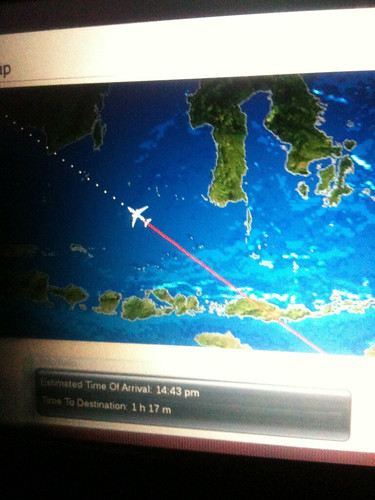 Arrived an hour late thanks to us leaving Brisbane late. 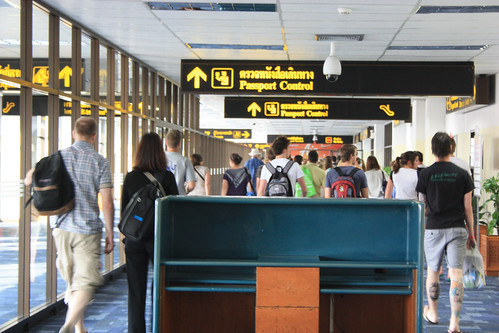 Took a metered taxi to Patong Beach cause I had read they are more direct and end up being cheaper than the touts at the exit. Have nothing to compare it to other than it cost me only 450 baht and most people say it’s around 5-600. I did have a second passenger who was a mate of the drivers though but i didnt mind cause they let me sit in the back quietly. The drive to the hotel blew my mind. I must have seen 500 instances of things that would be an offence on Australian roads. There were babies carried on scooters, old women in the backs of utes, sidecars on motorcycles where the seat was a plastic outdoor chair and people driving down any old side of the street. I was giggling to myself whenever I saw something like that because even though I had seen pictures of it you never really believe it until you see it. It certainly showed me I was in real Asia now – not that Hong Kong type of Asia. 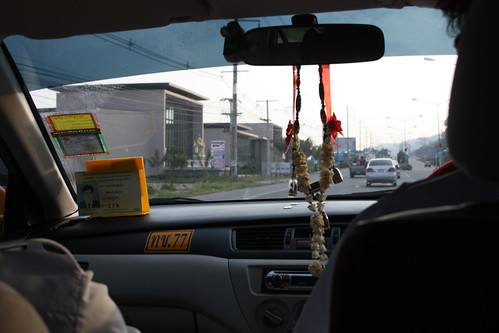 The hotel I’m staying in seems pretty good for the price I’m paying but I’ll wait and see. Not much of a view but the bed looks clean and the toilet is mine. Will head out to the streets soon to explore – but I did get a glimpse when we had to go round the block when the taxi drivers missed the turn. The hard initial culture shock is almost done since I have now made my first money exchange and have my own lodgings but if I do get desperate I did see a sign were they were selling Aussie meat pies. I can’t help wishing I had packed Wendy though to help me translate. 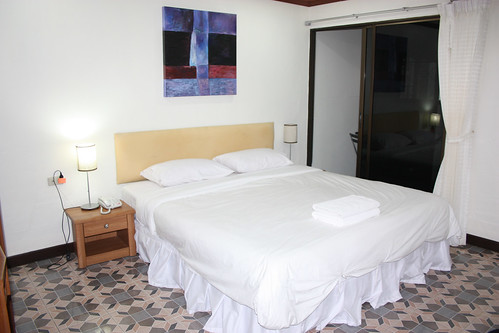 After settling in to the hotel and getting myself sorted I headed out for a walk around 7pm. Surprisingly this was still a bit too early for the Bangla rd clubs and there were few if any people in the bars. Plenty of cheap shops to look at for jewlery, t-shirts and thongs and millions of pimped up tuktuks. It was a competition to see who had the best stereo, paint job and under carriage lights and rides the lowest without scraping the ground. 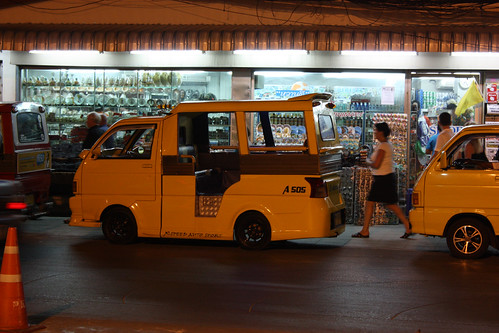 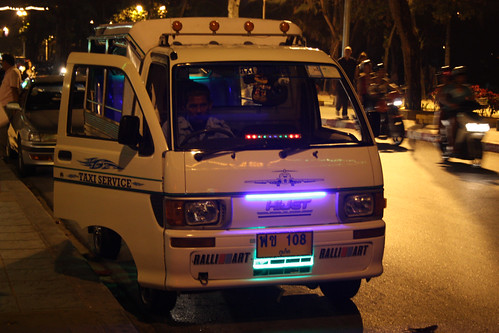 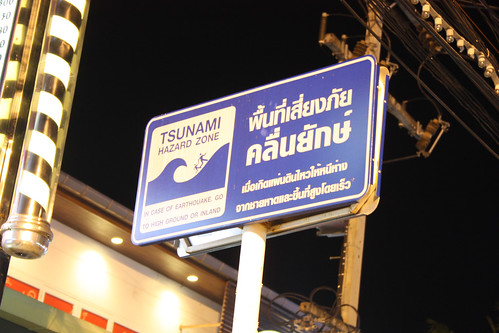 I managed to do a long block in search of something cheap and easy to eat (not hungry enough for a proper meal) and I ended up with a chocolate and banana crepe cooked from a cart in the side of the road. I know I know – crepes aren’t Asian but dammit it smelt so good. 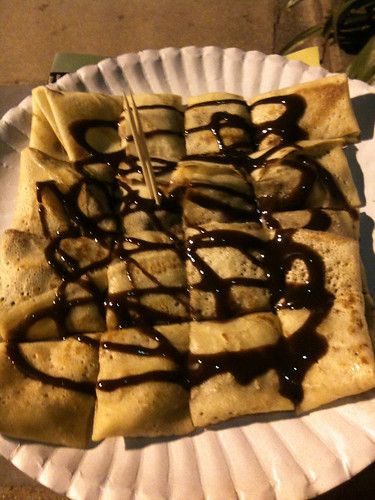 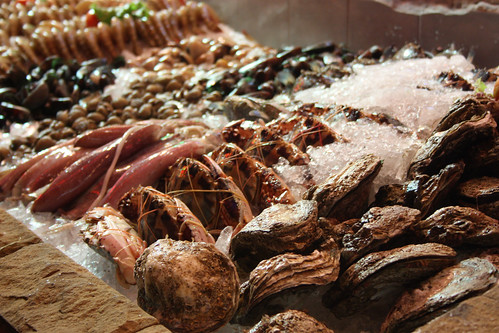 In my second lap of bangla rd I finally saw me some ladyboys – but really they were just drag queens like the ones you see in oxford st Sydney. There was also a guy walking doen the street with two giant lizards but i didnt get a photo aince it was too dark. On the third lap I finally got my first offer to see ping pong 😉 but at that point I was tired and hot and ready to crash for the night. An uneventful first night in Patong Beach but I’m sure I’ll improve on it tomorrrow. 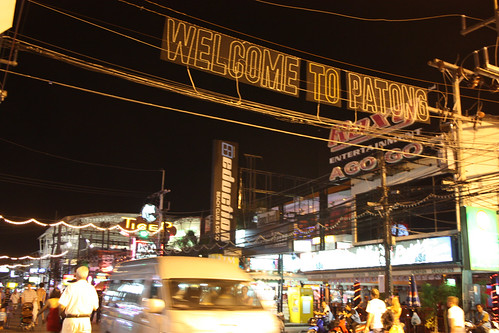 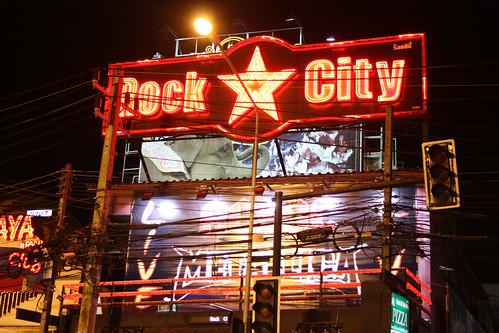 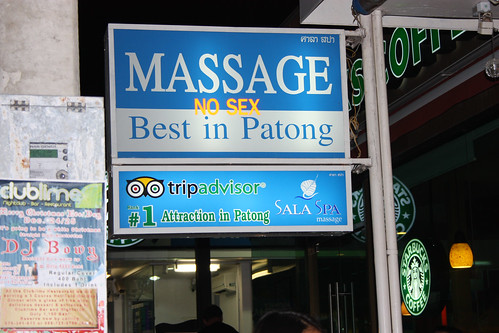 2010-01-17 00:47:47
amyob: Still haven’t left yet. Hope @Kelsbells and @digitiel rn’t hanging
around to watch it leave. Going to finally watch Casablanca on the flight