Slept well even though the air con sounds like a chopper taking off and I’ve got a sinus headache from the lack of moisture i’ve had after 9 hours in a plane and 8 in a hotel room . I’ve turned it off now so hopefully I’ll feel better after I go for a swim at the beach. It’s pretty hot here in Patong though!

A day at Patong Beach

After a raspberry smoothie and coffee for breakfast I headed past all the still closed shops to Patong Beach. The beach is like a fat westerner in swimsuits colony so I fitted right in. The only thai people on the beach are there to take your 100 baht ($3.30aud) for a deckchair or to hire a you a jetski. I set myself up with a deck chair, went for a swim and lazed about people watching. I didnt realise you can go topless on the beach! Not that I was tempted. 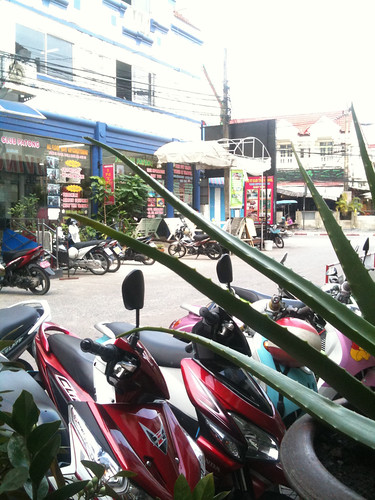 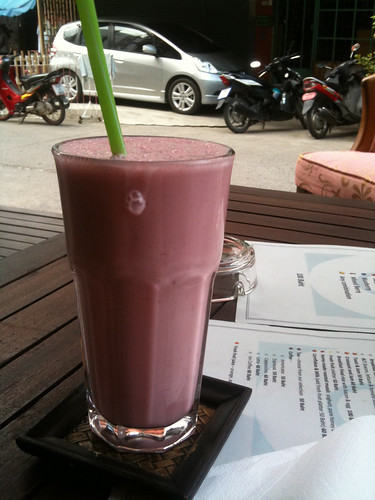 Couldn’t help think though that every time the tide went out it was a tsunami. I placated myself though with the knowledge that they have early warnings in place now. 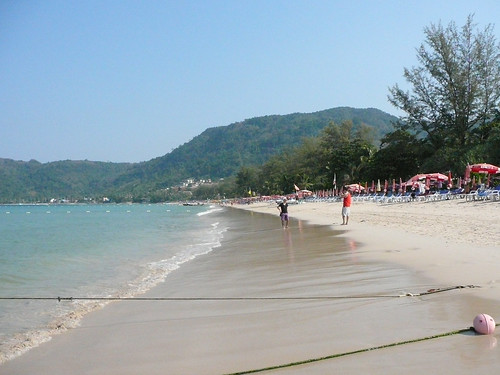 I spent maybe 5 hours there which may just be a record for me at a beach. It really hit my sweet spot – comfortable chair covered by umbrella, flat clear clean water, a parade of people strutting by and food delivered to your seat. You can even shop in your chair with all the dresses, wallets, flutes, henna tattoos, scarves and t-shirts being offered by the completely clothed, hat and jeans wearing touts. I know it can be annoying but they weren’t to me. They’d just let you know what they were selling and only stopped if you showed interest. 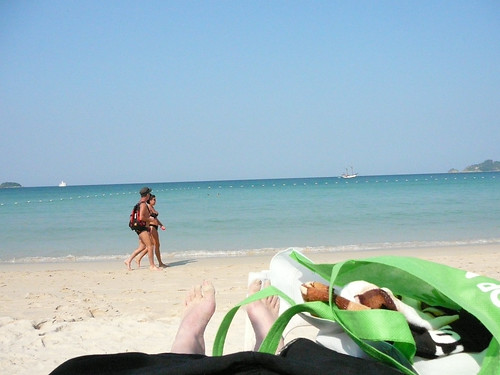 I busied myself by listening to the american couple (maybe canadian) argue kindly with the Aussie couple. I also ended up playing the German or lesbian game with two girls nearby. Although my gadar didn’t go off on them – they did both look like Portia de rossi and say danke. They were wearing thong bikinis and kept the mens heads turning when they rubbed sunscreen on each others bums. Throughout the day the had to keep moving cause the tide came in and they weren’t on deck chairs. I had my eyes shut with my cap on for about 10 mins and almost burst out laughing when I opened them and all I could see was their ass because they’d moved in front of me. In the end I decided they weren’t German or lesbian – they were swiss due to their blonde hair and relaxed body attitude.

I also loved watching the mostly English men with their pudgy stomachs and lack of humility. Some hadn’t even changed their haircut in 50 years. It always surprises me how brown the English get when they are away from their homeland.

After I’d had a lovely warm chicken sandwich delivered to me for lunch and had a final swim I decided to head off on some errands. I had hoped my headache would have gone away after coffee, water and food but alas it was still pissing me off. I headed off the beach in search of thongs, power converter and panadol.

An afternoon in Patong

Headed back from the beach past all the massage parlours (some which found it important to write “no sex”). Off the beach you notice the heat a lot more so I ducked in to the biggest shopping mall in the area to find aircon and some thongs. Picked up a universal power adapter at Banana IT for $23 Aud which was probably like buying something expensively from Harvey Norman but I can use this all over the world. 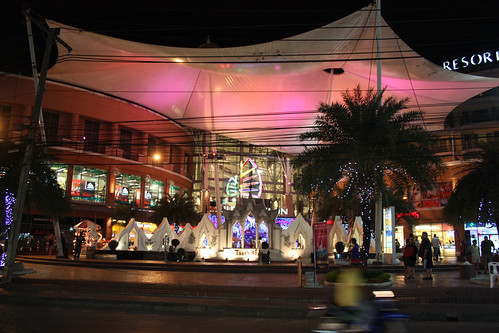 I may have spent a fair bit of my thong shopping time looking at sneakers but I couldn’t resist. Didn’t buy any sneakers though as I don’t need that kind of weight in my bag – plus they weren’t that big a bargain. Spent ages deciding on flip flops to buy since I’m not a fan and the toe bits usually give me blisters. Ended up with some scholls that seem pretty comfy.

After walking past a store that was giving 10 people facials in full view of everyone I wandered in to the supermarket. I love going to supermarkets in other countries because it really shows off the differences. I enjoyed the motorcycle helmet aisle with lady bug themed helmets (for that last minute head protection need) and the buckets of chicken legs that you bag yourself. I swooned at the donuts and selection of cocktail sausages and the incredible fruit and veg and seafood. Then it was back to the hotel for a panadol (travel doctor kit came in handy already) and a rest before heading out to dinner. 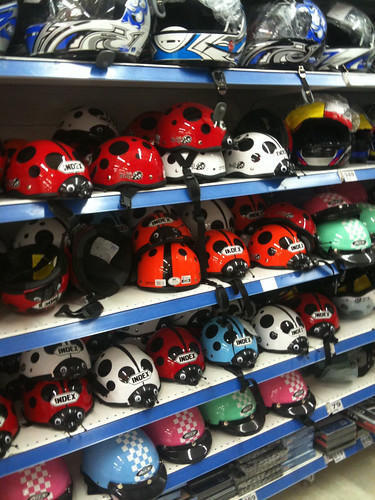 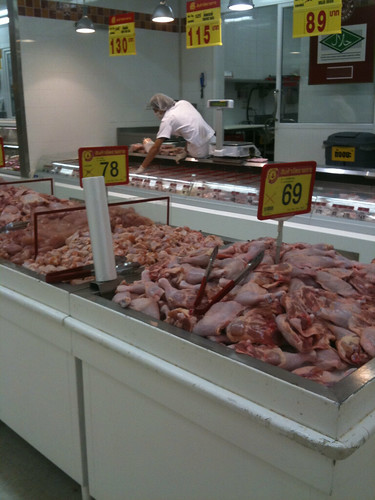 Back at the hotel I discovered that I can’t spend 5 hours in the sun unpunished and now have sone interesting burn lines. I thought I was being good with the sunscreen but obviously not good enough. I didn’t have Pauline to do the parts of my back I can’t get to. Instead I just google chatted to her before I headed out for dinner.

I took my suggestion for dinner from a place that “real travellers” would never do – a lonely planet guide. Normally once it appears in the guide a place normally becomes a victim of it’s own success and ends up being a den of expats “travelling”. But I chose to go to 3 spices because other places backed up it’s reputation and because it wasn’t too far away. Even had what they recommended – red snapper wok fried in coconut curry sauce and a mango pancake for dessert. Of course my requested “not spicy” ended up burning in true Thai style but it was still really good. The mango pancake was incredible – so fluffy. The location and design was spot on but I did feel a bit sad to be eating it alone with such a romantic setting with a candle and bird of paradise. Felt a bit guilty eating by myself. The mojito helped me feel better though. All up the dinner cost me 690 baht or $23 AUD. Lonely planet were right! 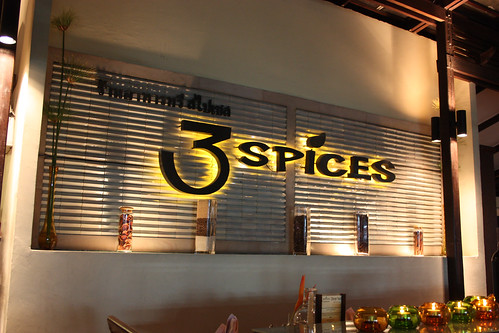 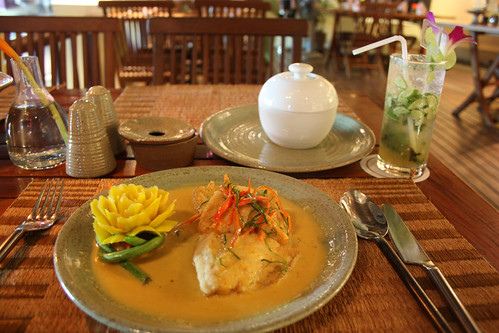 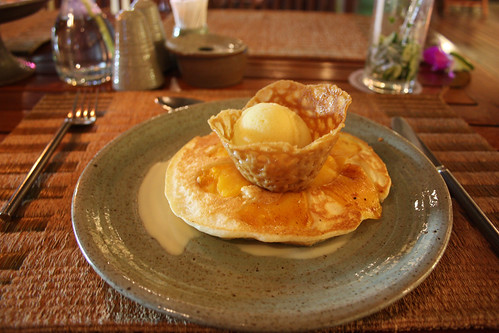 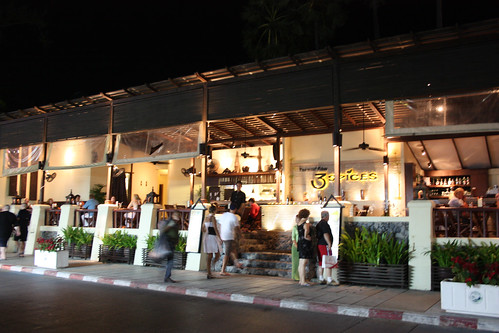 Thinking I needed to go to at least one bar in Patong I took another lonely planet suggestion and went to Two black sheep near Bangla rd. The live music was the draw for me but at that time of night all I got to see was Thai acoustic Elvis. I ordered a “tap that ass” cocktail just so I felt like I was in a seedy joint. I wasn’t feeling it in a room full of 60 year olds so I headed for bed and to set up 3g on the iPhone. 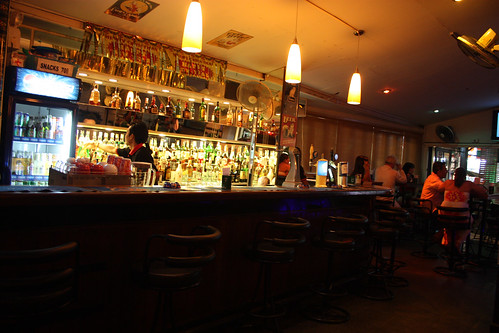 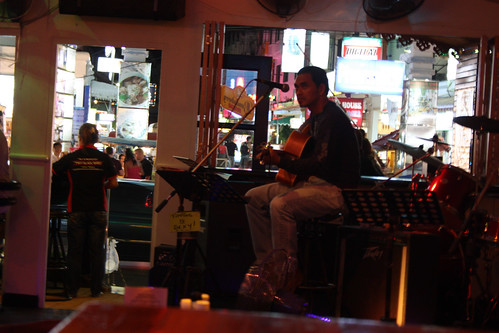 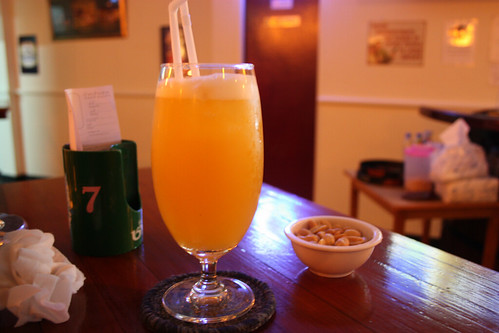