Today I decided to hire a scooter to see some of the other beaches. I’d evaluated the traffic over the past few days and although the one rule is there are no rules it made sense to me and I was willing to brave it.

Choosing a reputable scooter company though is extremely difficult and they also like to take your passport as collatoral. I wasn’t willing to give up my passport and since he didn’t take copied I chose to give the guy my license instead. Could end up being a dumb move but I have 24 hours to find out.

The scooter I chose was a Honda – I think it is a 125cc as it has no trouble up the hill. The scoot was empty when I got it but I’d already figured out how to get fuel. On the side of the road everywhere there is what looks like bottles of cordial in crates. I wondered why they were advertising drinks like that until I saw the words gasoline. Glad I didn’t buy any to drink! I went and picked some up from the lady i saw and stupidly forgot to ask how much before she put it in. I’d seen them for 30 baht a bottle but I ended up paying 80 for 2. Serves me right but in the scheme of things it’s still cheaper than home. 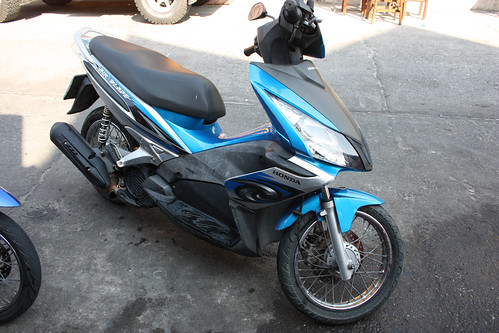 Once on the road I did the patong beach strip (after picking up my travel doctor bag – just in case) and headed over to Kamala beach. The curvy coastal road was gorgeous to ride and I was thinking it couldn’t get much better than this. Then a frigging elephant appeared on the side of the road with a trainer and two peoples perched on top. I had a bloody grin from ear to ear when I saw that. Can pretty much say that’s never happened riding the vespa in Brisbane! 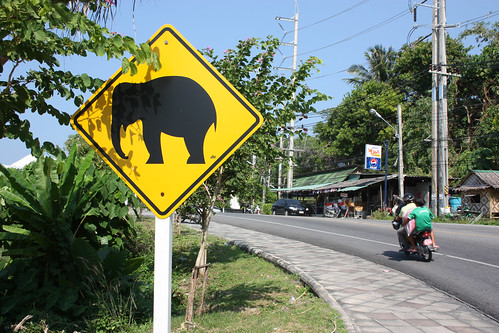 Kamala beach was way more relaxed than Patong – I couldn’t see anyone selling their wares and it had a more authentic feel to it with tall trees and huts selling cocktails. Still fat westerners though and a lot more children. 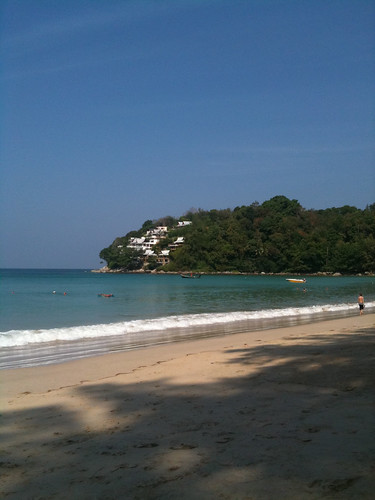 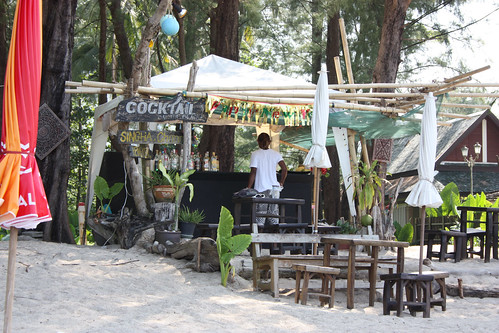 After a quick dip I got back on the scoot (which you can park anywhere) and headed over to surin beach. More curvy riding fun and I missed the turnoff and ended up in Ao Bang Thao. It’s more fishing than swimming with all the longtail boats and dirty water. The back road was fun though as I finally got to see Thai houses which were mostly new – probably due to the tsunami. You can tell the difference between rich and poor ones though. 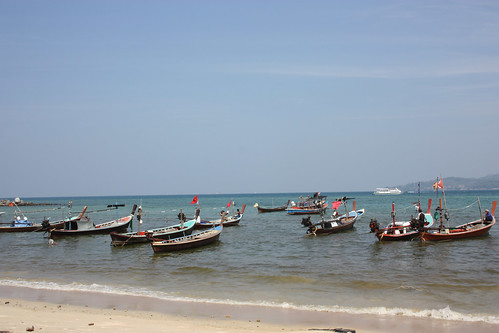 I knew I was nearing Surin beach when the shops got a little more expensive and the hotels were a lot nicer. This beach had a more youthful feel but still a lot of older European people. The water has a bit more current to it and there are rocks on the headland. A lot more restaurants shaded by trees which is where I’ll have lunch since I only had coffee for breakfast. I’m starving now and it’s 12.15 so I’m off to feed my face. 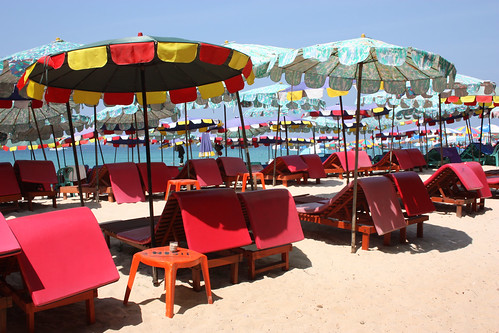 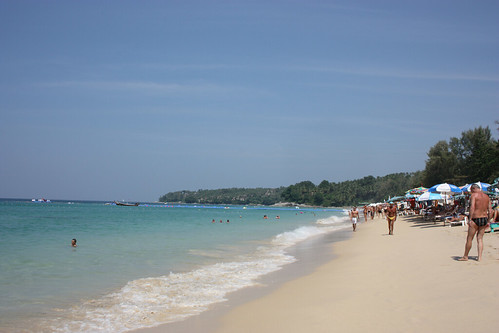 That was a bit stupid

If a fish costs 450 baht it’s not because it’s an amazing fish it’s because it feeds a whole family! Explains why the poorly english spoken waiter looked oddly at me when i ordered it Rough for someone who usually avoids whole fish. Made a good hack at it though. Includes before and after photos. 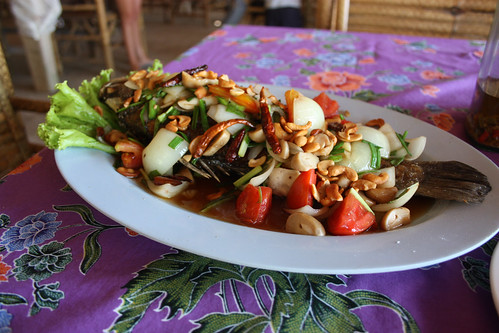 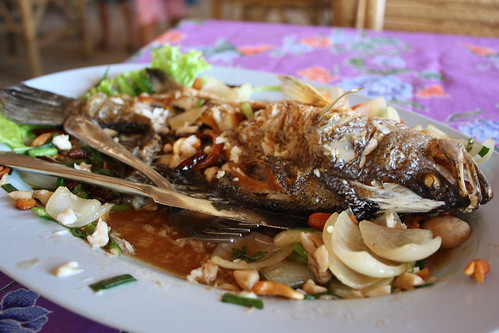 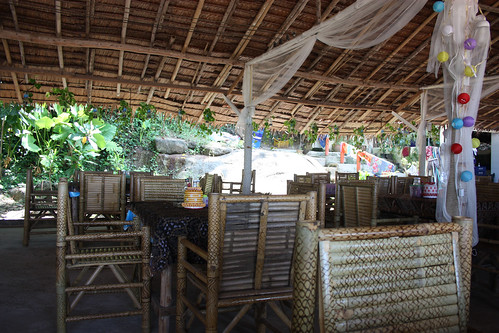 After lunch I headed over to Laguna Beach but didn’t find LC or Lo – only a couple of elephants and dusit lodge. I was trying to find the real Ao Bang Thao beach since I’d read that it was the best of all beaches so I figured it wasn’t the dirty fishing village I thought it was. It was a hard beach to find though since it seemed all the resorts were blocking me from it. Eventually found a small road that lead me to a place that let me get to the water. The road was grassy with lots of leaves and I figured it must have been hit by the tsunami badly when I came across a cemetery with lots of unmarked graves. Sobering.

The beach however was the least busy out of all of them and probably the best if I don’t want to leave your resort or the beach. There didn’t seem much to see. I took another dip and then it was back on the scooter drippin wet. I decided I had to see the nike outlet store while i still had wheels (it’s an addiction). 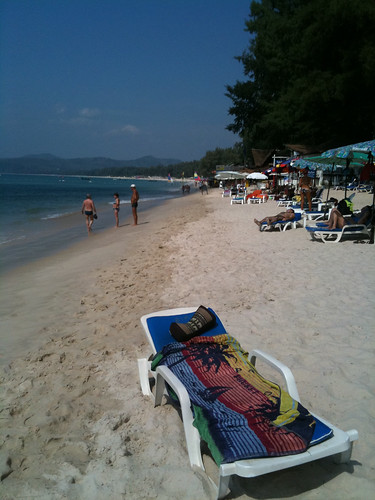 We had passed the outlet store on the drive to patong but it turned out to be just a little bit further than I expected. This ride was busier and therefore a lot dicier but there is ample area on the side of the road for scooters. The Nike store was a let down compared to harbour town but I did see some nice acgs if I need to replace the ones I’ve got. But it was only a viewing trip. The scholls I bought yesterday are giving my left foot the shits but the right one is perfect. Guess I’ll just persevere. Right now I’m having coffee in a coolly designed coffee shop and then I’ll head back to watch the sun set over Karon beach and maybe get to see the Simon Cabaret. My last night in Patong before I head over to phi phi island to “relax”.

Made it to Karon Beach. Most surf I’ve seen yet and maybe the most westernized area of them all. Longest and widest beach too. It even has crabs. 🙂 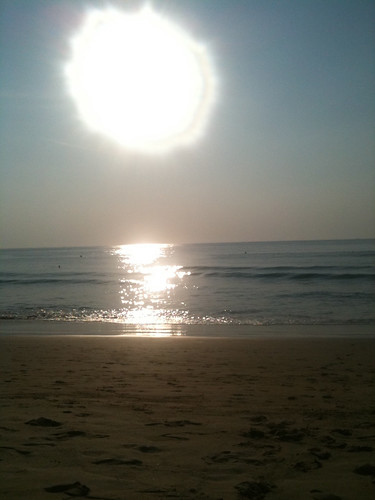 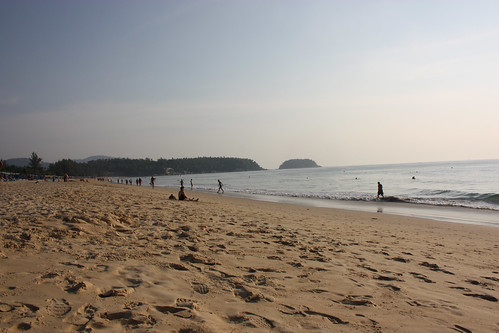 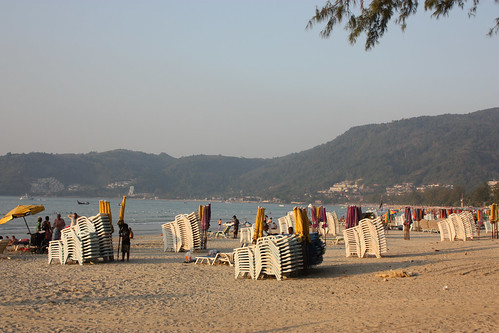 Before the Simon cabaret show

Drove the scooter to Simon cabaret show and parked it in the motorcycle area where directed. Was concerned about the length and whether it would get knocked over by a car going round the corner. Decided it was ok but as I walked away the two bikes next to it fell over while mine was left standing. Got wonderful help from the two staff there when trying to pick it up. Didn’t get any dirty looks and one of them even took me inside to buy my ticket. I’m guessing he didn’t want me to hurt anything else. The bikes seemed ok though. They make them tough in Thailand. So after that adventure I’m off to see some ladyboys do a cabaret.

After my scooter knocking over incident I went inside to see the Simon Cabaret. I have no idea why it is called that and kept wondering about it through the first number which was basically a song that repeated welcome to Simon Cabaret over and over again. The thought wasn’t enough to distract me from the fact that the male dancers in the show (not the lady boys) were horribly out of time and their care factor was nil. I now understand the need to smile when you are on stage dancing and a little bit of flair never hurts. I’m not sure but I think the Japanese couple next to me thought so too. They kept laughing and pointing at the guy who was the worst offender. There was one guy who put in the effort and I suspect that was why he danced a lot of the male lead parts. 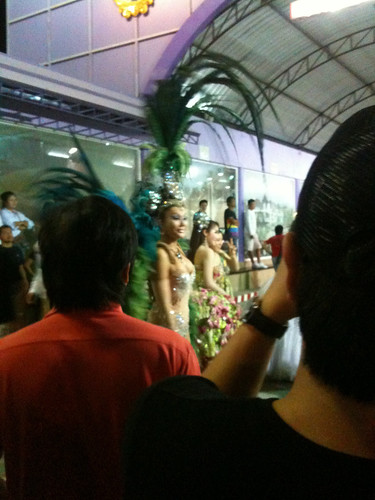 As for the ladies they too had poor timing as a group but they put in the effort. They wore some amazing costumes and have beautiful sets (stage props) but the lack of cohesion annoyed me. One did a great Tina Turner impression and “I will survive” was also a hit but my favourite was the Japanese geisha who flapped her tongue maniacally and kissed audience members – funny.

As for the lady boys, some were obvious but most of them I couldn’t tell either way. My first thought was that they should remake the classic B movie “showgirls” as “simonsgirls”. A young boy who wants to become a lady follows his dreams by moving from northern Thailand to Phuket wanting to be the star of Simons Cabaret. Watch as he struggles through the pain of getting an operation and then knocks his biggest competitor out by suggesting a known hack surgeon to them. Finally he is the star and becomes a victim of his own success. Sounds awesome doesn’t it.

After the show you can stand outside and get your picture taken with them for 20 baht. I didn’t want a picture so I headed back in to town to grab a quick bite to eat. I found some markets serving hot food in the street behind the big jungceylon shopping centre and was just about to buy some chicken on a stick when I realized I was about to take two boat trips the next day and didn’t want to risk spending it in the loo. So instead I gave in and went to mcdonalds. Oh yeah I totally was a fucking westerner who can’t eat local food. But in my defense, I did buy a samurai pork burger which you can’t get in aus and with weeks to go I’ll have plenty more opportunities to eat from a cart. Wasn’t too bad a burger either. Also found the bangla rd boxing stadium with it’s incredible decorations outside. Wednesday night! Wednesday night! 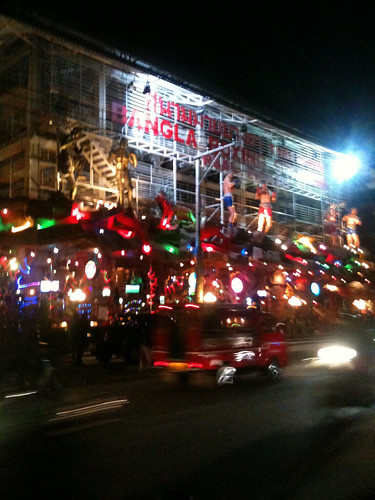 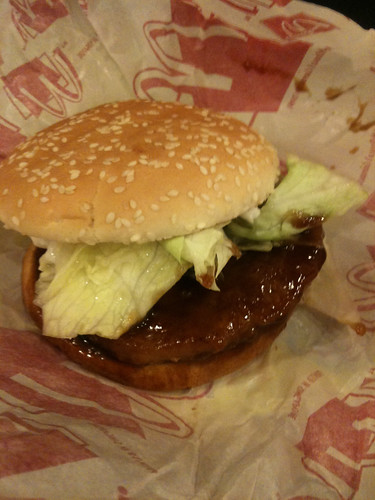 Tomorrow I head over to Phi Phi Island via Phuket Town where I catch the ferry from. The resort doesn’t have wifi or phone coverage as far as I know so I may be incommunicado for a few days. I’m hoping the scooter doesn’t get stolen tonight so I can take it back tomorrow first thing.