Had breakfast at Bodega and as I was leaving to get my stuff and check out I was greeted by the owner. He asked me where I was off to next and when I replied phi phi island he offered mini bus and ferry ride return for 700 baht. Knowing that it was 600 for a taxi only I took up his offer. He arranged it all for me and while we waited for the tour guide to come over we had a long chat. Longest I’ve had in 3 days!

He is from south Africa and started the business a year ago and is looking to make it a chain in Bangkok and Chiangmai. He mentioned that he wants to get local artists to decorate the rooms which will be great based on the art in the cafe. That has to wait until low season though. He talked about the struggles of starting a business in Thailand but he had experience owning them in south Africa. His biggest struggles after the red tape in Thailand was finding hard workers that spoke good English. He said he was generalizing a bit but due to Buddhism the thais aren’t interested in a career and can’t be motivated by money. They are just out for a good time and need to work in a harmonious workplace.

After the chat I headed over to the Jungceylon shopping centre to pick up some bandaids since surprisingly the travel doctor kit didn’t have any. At 10.30am most of the stores still weren’t open yet but the grocery store was. I killed some time wandering the store looking at food because I find that fun. You can get Milo with biscuit pieces!

I then checked out the bookstore to see how much books are. Not needing to buy anything cause infinite jest will probably keep me busy the whole trip I just browsed. It was funny to notice the romance section in the Thai book area. I guess all romance novels are designed the same. Also found a book that analyses the book Twilight and its social meaning in great detail The books do seem to be cheaper here and I gleefully noted that in the 50% off section there were tonnes of Scotland books for sale and none for Australia. No one wants to go to your homeland hey Cheryl?

Had a really excellent cheap green papaya salad with crispy pork skins for 60 baht – $2 AUD. it was in the food court at the shopping centre and is actually recommended by the guide books. They have an interesting setup where you put money on a card and then take it around to buy the food you want. The shops are set up around provinces so you can decide to buy northern Thai style food, central or phuket. For once I was dining in a food court that actually took pride in food. The lady even mixed it all together in a mortar and pestle. Checked out some really good steel art while down there in the bazaar too.

Back to Bodega as I was feeling weary and unmotivated and I lazed, read and drank smoothies waiting for the 1pm mini bus to Phi Phi. Hoping desperately that an ear ache isn’t coming on. 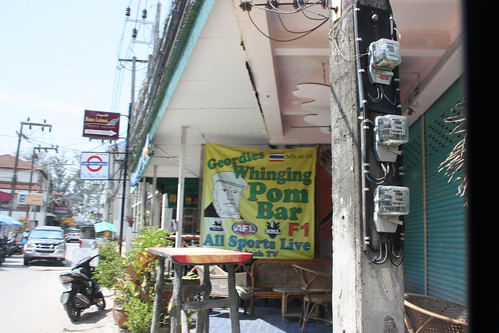 Take a good hard look at the motherfu**ing boat

Never thought I’d be on a boat! The lonely island have ruined every boat ride for me from now on. On board the boat to phi phi. It’s highly unlikely I’ll have phone or internet reception there so I may not see you again for a few days. Ahoy me mateys! 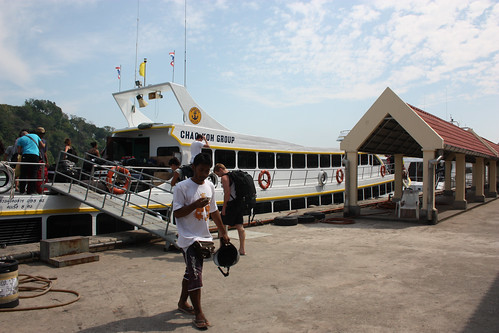 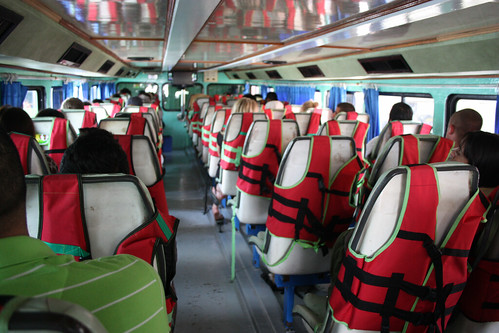 The cliffs are stunning as you arrive. Amazing! 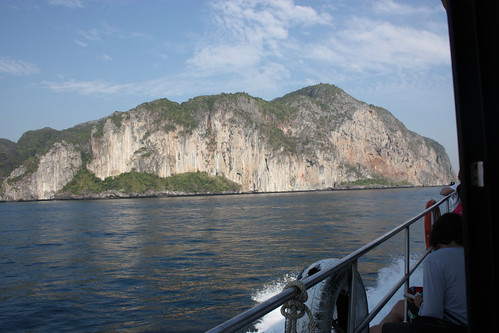 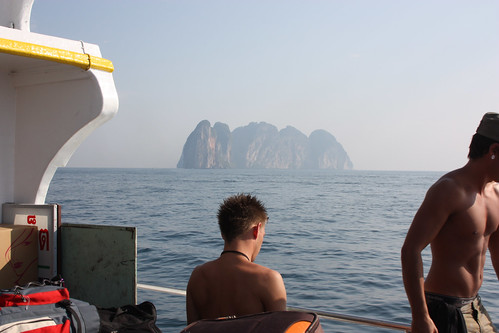 The mini bus that took me from Patong to Phuket town pier ended up with 2 French girls and an Aussie guy and a girl. I kept quiet the whole time and just listened. The French girls said ooh la la when they got in the mini bus – I think cause it had aircon. I had a giggle cause I didn’t really think they said that. At Phuket town pier it took ages for the French girls to get out which prevented me from getting out. In the end the guy put the seat down and let me out before them. Then when they were chatting to each other and ignored him he and I shared a knowing grin.

After arriving at phi phi pier I found the guy with the sign to take me to the Relax Resort. I had to stand in the sun for a while as we waited for other ferries to arrive. While I waited I overheard a young Aussie guy talk to some Dutch people. He was telling them that he was from Darwin, first time out of the country, first day in Phuket and a ladyboy stole his wallet. After a while he chatted to me too so i got to ask more questions. He was of course drunk at the time and it was the bar owner who he was talking to who spotted it. He managed to get his wallet back off her but the 4000 baht was gone so he is having to live on credit until his next pay which is tomorrow. He was so drunk he couldn’t even tell me if she was pretty. He’ll be living off that story for years. 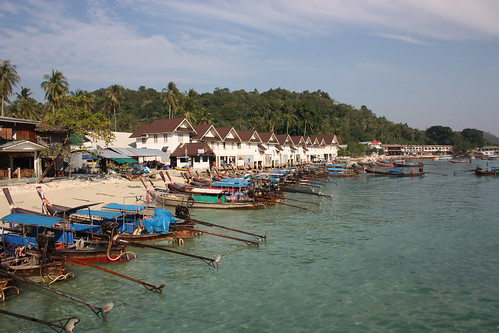 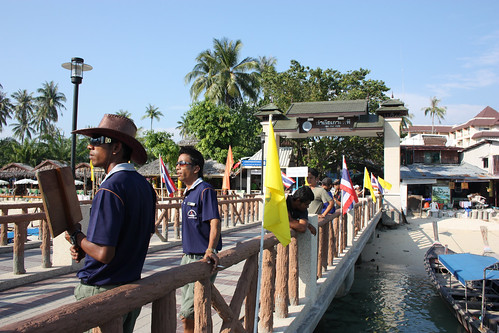 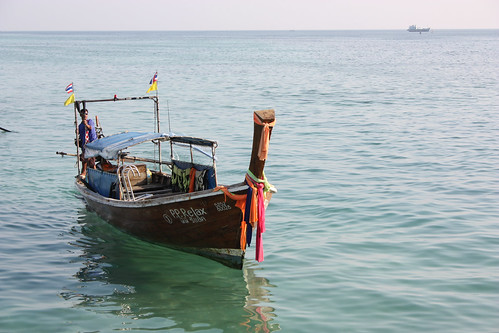 They weren’t staying at my resort, so I waited with a group of Japanese girls until our boat arrived. Getting on board I almost kicked the guy in the face but he coolly leaned back and took it in his stride. I smiled and apologised. Another guy posed for pictures for me once we were on the boat while they loaded supplies. I figured it wouldn’t be a rough ride when they put cartons of eggs behind the luggage. Instead the long boat took us around the otherside of the island past rocky shoals and jungle palms to my own deserted hideaway (other than the 50 or so other resort guests). My bungalow is like something from Robinson Cruesoe complete with rattan roof beautiful wooden railings and private lazing couch with a view of the ocean. Power doesn’t come on till 6pm and I have a cold shower and mosquito nets but that is the price you pay. 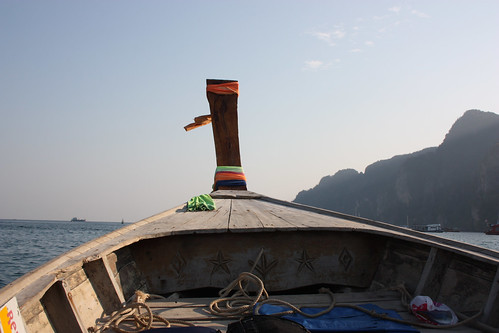 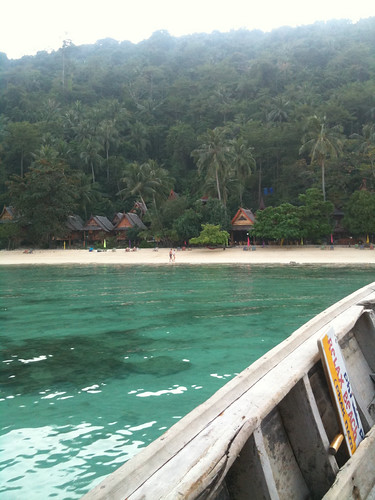 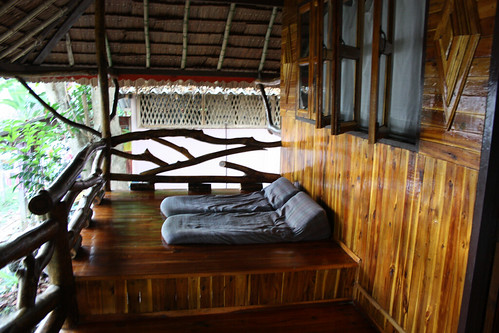 After checking in I changed in to my togs right away and headed down to the water where I was little disappointed to realize there were coral bits everywhere. The fact that the water was so clear made it easy to decide where to walk but what made I cooler was when I noticed the fish checking me out. Black and yellow or red and silver ones. Another grin and astonishment at how beautiful this place really is. Tomorrow I plan to do fuck all except swim and read, then the next day I’ll aim for a tour.

Evening at the relax resort

After a shower and a bit of a book read on my own personal verandah (where I was bitten by a mozzie and now have hypochondriac malaria fears – we’ll know in a week if I get it) I headed down from my bungalow for a cocktail and dinner. It was dark and the power doesnt come on until 6 so i didnt have much choice. The bar is a hut on the beach and is awfully relaxing as the name of the resort advertises. The other drinkers though were in to their own shit so I had to nurse my 200 baht ($6.60AUD) banana colada without conversation. 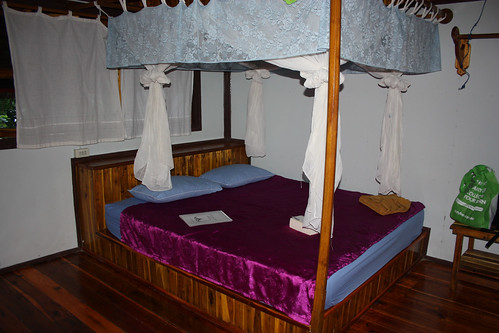 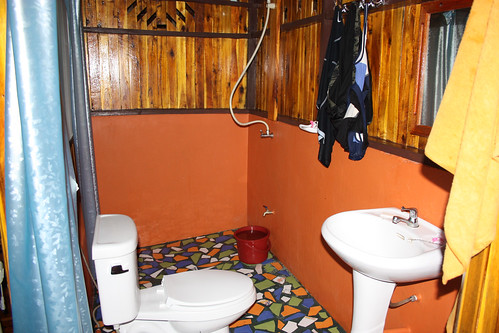 For dinner I ordered a chicken, lime, lemongrass coconut milk soup and managed to burn my tongue. I suspect I was a game for the Europeans next to me who were trying to guess my nationality based on the three words I said. After I said thankyou to the waitress I overheard them say American and “Ozzie”. I have to say I was impressed.

By the time I got back to the room it was 8.30pm and the power was on so I read for a little while longer then passed out, stupidly tired for someone who hadn’t really done that much all day.