Almost a year ago I watched Anthony Bourdain ooh and aah his way through a meal at the French Laundry which is generally agreed to be the best restaurant in America. Chef Thomas Keller even made Anthony a special tobacco and coffee infused custard with foie gras because he knew of Anthony’s vices. Watching the show made me extremely jealous of the food he was eating due to the amount of thought and care that was put in. Since then, I’ve watched shows such as Top Chef and Hell’s Kitchen where it became obvious that Keller’s influence as a chef extended much further than his own michelin starred restaurants. I’ve always wanted to taste that kind of food myself but living in Australia makes a vist to the Napa Valley a little more expensive than the cost of a meal. So you can imagine my excitement when I found out that a chef who worked in Keller’s kitchen had opened a restaurant in Brisbane.

Aware that dining at Urbane would involve mutiple courses and a lot of money, I waited for a special occasion to rear it’s head and managed to get a party of 6 people together who were willing to ante up for a delicious meal. Word on the grapevine was that we’d end up eating there and then heading off to McDonalds after since the portions were so small. I had concerns that we’d walk out feeling unsatiated with wallets emptied but I was willing to give it a go since the payoff could potentially be huge. 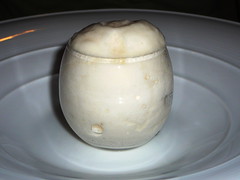 We arrived at 6pm as a party of five and were immediately shuffled to our table. On the left is a bar where you can sit for cocktails and on the right are the tables. When Pauline turned up we were promptly served an aperitif that was different for each of us and a total surprise. Cheryl was given small heads of asparagus which Chris christened green frogs penis’ – a name that amused the waiter. These little tasters are meant to give us an idea of what was to come and it was my first ever exposure to the foam technique that Marcel used so often in Top Chef series 2. Gary was served up a Red Bull and Vodka foam while I had a beetroot foam with a base of green beans and garlic. If you try the foam by itself it’s not great so it works best to dip your spoon all the way to the bottom and scoop out the goodies at the bottom mixed in with the foam. Chris had some sort of wild mushroom mix which was AMAZING. He totally won the first round of dishes which was a freebie. 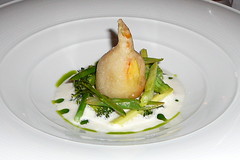 The real first course was a selection “Fresh from the Garden”. I chose a Salad of Greens which ended up being battered goats curd with beans, broccoli and a white sauce. The salty taste that is natural in the goats curd worked well with the fresh beans. I reckon I won that round but Gary’s Organic Terrine took out the prettiest award. Before we actually got to taste any of it we were “introduced” to our meals by the waiter. He really did use the sentence “Let me introduce to you the Risotto with a melange of forrest mushrooms, fresh chestnuts topped with shaved Reggiano Parmaggiano”. Chris and Cheryl had a giggle at that but I guess it’s to be expected when you go through around 8 sets of cutlery throughout the dinner. They thought it was a bit wanky whereas I quite liked it. 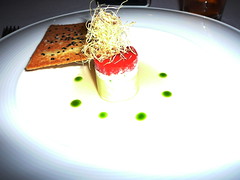 Second course was from “Australian Coastal Waters” which meant seafood. I went for the Blue Swimmer Crab which had a tian of crab mixed with creme fraiche surrounded by a pickled cucumber topped with tomato gelee. For some reason I was expecting it to be heavy and was quite bemused by it’s summery freshness thanks to the cucumber. In Brisbane you don’t often get surprised by what you are eating so it’s a special event when you do. The wasabi that came with the Yellowtail King Fish that the others ordered gave the others a bit of a surprise at the back of their throat and Pauline commented that the fish was as fresh as the one cut up for us in the fish store in Adelaide – a great complement indeed. I again thought I won the round and this time mine was the prettiest. 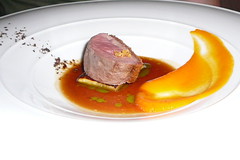 “Ponds and Pens” was next which gave us a selection of Duck or Chicken. Pauline went duck, I went chicken and it paid off big time for me. My Poularde from Barlill in Queensland stuffed with herbs, poulee of double smoked bacon and corn with a petite salade was absolutely the best chicken I’ve ever tasted. When they say stuffed with herbs they actually mean that between the chicken and the skin they place a thin layer of herb mix which allows the skin to go crispy while keeping the white meat moist. I’ve never had a piece of chicken so tender it melts in your mouth. Absolute perfection and the duck didn’t even get a look in. This is the course that topped all the others for me. Unfortunately my photo of the chicken is overexposed so you’ll have to look at the duck. 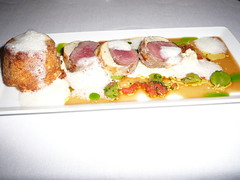 Main course came from “Paddocks and Pastures” which would normally be your meat and three veg deal at your local pub, but here at urbane it evoked swoons from many men and women who will never view meat in the same way again. The Wagyu Cap 6+ course was the most popular at our table but I went for the Milk Fed Lamb with Pecorino double baked souffle, leak fondue and roast garlic foam. My first ever souffle and as a potato lover I will take that souffle over a good roast potato any day of the week. There was not one flavour on the plate that didn’t belong there with the lamb. Chris couldn’t get over the Wagyu however and demanded that Drew figure out how it was cooked so he could copy it. Somehow they determined that it had a charred flavour with pepper. Chris has now added this dish to his very short list of best meals in Brisbane, previously only Marco Polo’s Peking Duck was on it.

At this point we served a palate cleanser of sorbet. Drew and I got lucky with the Granny Smith Apple sorbet with a touch of caramelised balsamic vinegar. They can be so particular about the type of apple because it tastes like you are eating a cold version of a granny smith. There was also strawberry and raspberry flavoured sorbet for the others – but Granny Smiths won here. 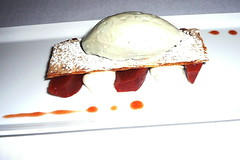 The “Say Cheese” course was next and mixed by a couple of the diners. Chris had already had his Fromage De Chevre with beetroot, honey and rocket with hazelnut salad early so his goats cheese course was over. The rest of us went for the Roquefort Papillion which was a blue vein cheese with poached quinces and caramelised walnut mille-feuille. First few tastes were devine even if the green colour of the cheese was a little odd. The quince played the odd and even game with the white stuff and topped with a chewy incredible thing that I haven’t figured out how to describe. This course is way too rich for one person to consume however so by the end of it we really were forcing it down. They either need to lower the cheese portion down or advise people to share. This was the only meal I had a complaint about and it’s odd that in a sea of small portions I recommend to have less on the plate. 🙂 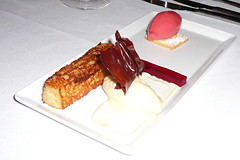 Finally, the course absolutely everyone waits for (unless you are Chris and order two desserts, eating one at the start and one at the end). The P and J sandwich was the funnest meal of the night – essentially it’s the american favourite Peanut Butter and Jelly sandwich deconstructed in to peanut butter ice cream, french toast and a rectangle of jelly matched to a sable biscuit with raspberry sorbet. Unfucking believable and something I’m trying again. Pauline, Chris and Cheryl went for the Turkish Delight which has valrhona chocolate fondant and white and dark ice cream. To some of the others this looked like a skid mark on the plate, but to me it looked like heaven. Surrounding the poo smear was rose flavoured sweets and pomegranate seeds which I originally thought was a lolly due to the colour and was stunned when I bit down and tasted nature. I reckon the P and J sandwich won this round, but the inside of the turkish delight chocolate thing gave it a run for it’s money. 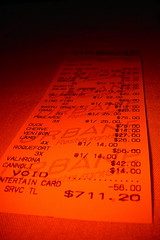 As for the service in the restaurant, I didn’t notice. Which is to say that it wasn’t bad or good, it was exceptional. If you notice that the food is taking too long or the waiter is asking too many questions about water then that is annoying service. Not noticing means that you were having a great time with the people you were with, your drink was always full and the meals were spaced within an adequate time frame.

Urbane is an incredible restaurant and the finest dining experience I’ve ever had. Each course was an adventure and the surprise was something to look forward to. The $120 per head was worth every cent and I’m pleased to say we were full enough to not need McDonalds at the end. It’s not a place you’d visit every week but nothing beats it if you want to impress someone. It is in the 2006-2007 Entertainment book (but not the 2007-2008 one) so if you have the card you don’t have long to use it.

Fuck that was three and a half hours of gastronomic bliss.

4 thoughts on “A meal at Urbane in Brisbane”