Went to the Songkran Festival in Forestdale yesterday. It was sold to me as a Thai Food Festival so it wasn’t hard to get me there, but it turned out to be much more than that. It was a pretty hot day and we were stupid enough to not think about hats so our time there wasn’t as long as expected. I met up with a friend from work who is Thai and she was kind enough to take us around the stalls and point out the food and explain little snippets of her culture. 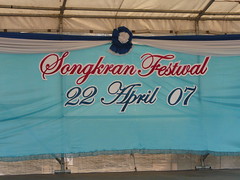 My highlight of the day was a drink called “pink milk” which is served in a plastic bag. It tasted a little like a rose flavoured drink and had evaporated milk in it. When I got home I researched it and it looks to be a common drink in Thailand called Num Yen. I gots to gets me some of that red syrup! I seem to recall from some tv show that I watched was that the reason they serve it in bags is because the sellers can get the deposit back from returning the bottles and cans. Pauline ended up with a milk tea.

A lot of the stalls sold street food so it was possible to pick up a small nibble for a $1 and then move on to something else which is a great way to try everything. You had your usual satay sticks and spring roll standards but there was a fair bit of stuff there I’d never seen before. If you like food, look out for this festival next year.

Since it was so dusty, hot and they’d sold out of the pink milk when I turned up to buy a second one we decided to head home, missing out on the beauty pageant that was to occur later in the day. Apparently they decide the winner by the girl who has the most coloured chains around her neck. They sell the chains to people who then place them around the girls necks. The more chains the more money is raised for the charity. 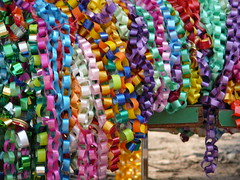 We also had another reason to return home early (not only because it was the first night of Big Brother 2007) – we have a new member of the household. Pauline had bought a new cockatiel from the cockatiel show we visited before the festival and she was desperate to go home and spend more time with him. At least, we think it’s a him – he’s only 8 weeks old so it’s hard to know yet. His name was Timmy when he left the show thanks to the four year old who lived in the house where he came from, but by the end of the day he’d turned in to Casper the friendly ghost due to his colour and quietness (although that’s changed a little now). Baby the existing bird (who used to be called Analog when she was partnered with the now deceased Digital) doesn’t seem too interested in the new member. The most she’s done is demand a head scratch and when that didn’t work she could care less. It’s hard being second fiddle to a bird at the moment, but I’m sure she’ll remember me when the time is right. 😉