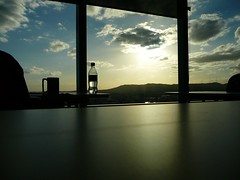 I moved in to my new office today in Brisbane Square and it’s fantastic. The view is a little distracting, I’ll admit. We’ve taken to yelling “Train” when we see one, but since the citytrain goes by pretty often we’ve amended it to “Special Train” when there is something different. I decided to sit facing the view which ends up with some glare in the afternoon, but when you have sunsets like the one in the photo, you can’t turn your back on it. Setting up took less than 20 mins as our computers were working without fuss. I just unpacked the little I had in to my personal storage unit, hung up a few pictures inside it and went to work.

Until morning tea that is when everyone on the floor met for a moving in celebration. We had some excellent nibbles to eat while all the speeches went on, then we watched a video from the CEO on the tv that is out in the lunch room. It’s primary purpose is for messages when we arrive at work and little videos like what we saw today, but I’m sure it’s going to be great for watching the Melbourne Cup – the one thing we are allowed to stop work to watch. It is the race that stops a nation you know.

My only negative complaints about the new building is that the soap smells like a toilet (you know that clean cover up odour type smell) and the spherical artwork out the front looks like dinosaur eggs or droppings. I’ve had a look at the new combined state government/brisbane city council transport centre and it is kitted out as good as nasa. Lots of screens to make sure the traffic is moving and even a couple of projectors for when something needs to go bigger because it’s interesting. Next week I’ll get to see the newly kitted out gym and soon the shops will start being fitted out. Rumour has it that coffee club and the shingle inn are moving in, but I think that is stupid of the coffee club to move a store in across the road from the existing one – especially as their coffee is nothing to rave about.

But today was a special day because I got to experience everything for the first time that will soon become bland and mundane. For now everyone is mostly happy as it is a great work environment. I hope it stays like that.