Throughout my teens and twenties I wasn’t too fussed about my birthday since it was on school holidays and it was too hard to organise things then. Apart from a surprise party at age 15, a bittersweet 21st birthday and a karaoke bowling 30th my birthdays have been mostly forgettable. Somehow though I’ve experienced an understanding of why people get excited about birthdays – it’s just an excuse to get a bunch of people together and have a good time. Since my idea of a good time involves food, I thought it would be best to celebrate with a degustation dinner at one of Brisbane’s best restaurants – Restaurant II.

Classed by Gourmet Traveller as the second best restaurant in Brisbane (ironic thanks to it’s name) in 2008, Restaurant II was my choice thanks to it’s degustation menu. E’cco, the winner, doesn’t have one so it lost out. The $110 price tag could have been a little off-putting to the invitees but I managed to rummage a total of 8 diners to eat. Any more would have been out of my comfort zone anyway.

The restaurant is located in an old heritage building situated across the road from the Botanic Gardens and Samford Plaza. The high ceilings of the building means that the restaurant lacks intimacy and the design is a little sparse. One end is the bar, the middle is the entry and the seating area and the other end has all the tables up on a podium. This means the poor serving staff are constantly scaling the three stairs (if that was me I’d be spilling things constantly). If I had one big recommendation for the restaurant is to upgrade their toilet facilties – they felt a little public without any personal touches. But enough about toilets, it’s time to talk dinner. 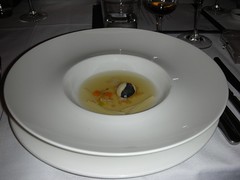 The first item that touched my lips was a chilled sherry drink that seemed quite lame and watery until the Rabbit Broth arrived. Tasting the sherry after the broth suddenly made wine matching a realistic thing in my mind – a drink you’d think was shit alone suddenly comes alive when taken with food. The rabbit broth itself was a nice introduction to the meal – light but some substance from the dumpling. We found it hard to scoop the final bits out of the plate but I’m not sure if it’s cause we are unrefined or not.  It had a small sliver of truffle on the top which was my first ever taste of this highly sought after food item and I have to say I was a little confused. I could taste the earthiness mentioned but I can’t say I swooned over it. Maybe something got lost in the australian translation. 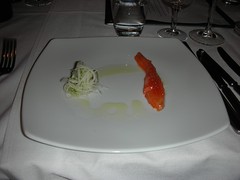 The trout that came next was larger at one end than the other which meant that it was rather fishy at the fat end. I wasn’t too enamoured of this but enjoyed the side salad and the design where the dressing linked the salad to the trout. The dressing was a little flavourless however. 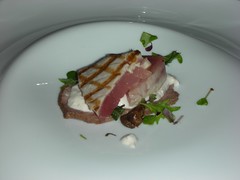 The seared tuna was a very nice dish as I don’t mind a bit of fresh raw tuna since my Adelaide visit. The veal worked well with the tuna and I enjoyed the sauce 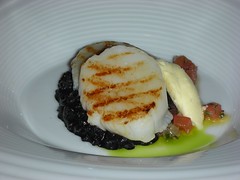 Harvey Bay Scallops and squid ink tuna. OMG. OMG. OMG. As a newish fish lover this dish blew my mind. I now understand why Gordon Ramsay chucks major tantrums over rubbery scallops and I have now tasted what a perfectly cooked scallop is. Squid Ink sounds disgusting but it was this salty buttery rice dish that has now absolutely changed my mind about risotto. I’ve always thought it was a gluggy mess of thick rice but I’ve now joined the legions of risotto lovers. Absolutely the highlight of my meal. 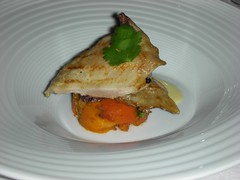 The quail was a bit meh to me, nothing special after the amazing scallops. This is something you’d get from a pub trying to go upmarket – it’s nice, it’s trying to reach above itself but it’s ultimately bland. 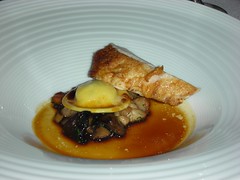 This corn fed chicken was deemed a little dry but I liked the crispy skin. The condom shaped ravioli was a little offputting and maybe a little too al dente. I guess I like my pasta a little softer. The lardons and sweet breads were great however – I could have done with lots more of that. 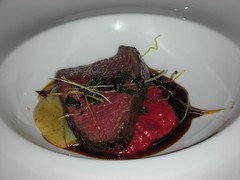 The Venison with horseradish, chocolate and “straw” was judged the best by most of the table but it couldn’t beat the scallops for me.  Very nice piece of meat though and as Helen’s first Venison it would have been a great introduction. 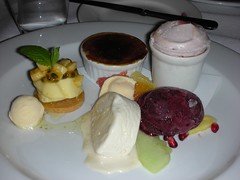 The six wines I’d had by this point made me drunk enough to forget to take a photo of the cheese but they were n’t much to write home about. Danielle described the hard cheese as tasting like cupboard while the blue was a little too in your face at this point of the meal. Desserts were great – especially the variety. It’s kind of like a “I can’t decide what to cut so I’ll put it all on the plate”. Normally that wouldn’t work for main meals but for desserts it’s certainly welcome to my sweet tooth. The strawberry souffle and banana parfait were hits while the pomegranate sorbet was too tart or potent and overwhelmed the palate. The passionfruit cheescake was pretty cute and the creme brulee is a standard fave even if a little unadventurous.

At this point we were all very full and I was very drunk so I had to get a lift home. Normally I wouldn’t have been able to drink as much as I did but when you are matching different wines with your meals you tend to not notice until you get up. At least I was a happy drunk and I didn’t say anything I didn’t regret – not like Chris and his lesbian sommelier comment. 😉  The guy had a good humour about the whole thing and was very engaging – I like listening to someone who is knowledgeable about a subject and explains why they made the choice they did. The service was good (apart from one little stuff up where three people missed the fact that Trent didn’t have a fork).

How does it compare to the rest of my Brisbane fine dining experiences? Urbane is still way ahead of the entire pack, but like Gourmet Traveller, Restaurant two comes second. It didn’t have the wow or creative factor that Urbane had, I think because it’s clientèle are a little less funky business people. However it does have the harder to get product that isn’t too common in Brisbane. Good value for the money.