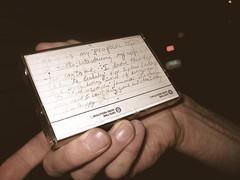 The first mix tape I ever got was from my first ever “holding hands” boyfriend after I had broken up with him. It wasn’t really a mix tape as such, more a cassingle of the classic “Nothing can divide us” by Jason Donovan. I interpreted to mean that the ex-boyfriend wasn’t quite over me rather than thinking he thought Jason’s deep dulcet tones would appeal to my oh so hip teenybop persona.

The second tape I got was way more impressive. The girl who gave it to me was a lot younger but had way cooler taste in music. She had some Flaming Lips mixed with a little Dream Warriors flavoured by some homecoming queen has a gun. This was around 1994 to give you some sort of timeline when we were in the middle of a short lived relationship. It was one of the most thoughtful things I’d ever been given because she had spent a long time mulling over song choices that portrayed some sort of message that she wanted to get across to me.

These days mix tapes/cds have a bad rap because people immediately assume that you are giving a mix to someone you are interested in. I’ve never viewed it in that way and always feel sheepish when I give one to someone. My affection for giving mix tapes is just a big game by testing yourself on how well you can judge someone’s music taste. If I get meaningful comments about the cd after they’ve listened to it a few times I know I got it right. If it is never mentioned again, I’ll know it’s got scratches on it and is probably at the rubbish dump.

As my tastes have diverted far away from the general mainstream (but not too far) it is getting harder for me to be on the money. Sometimes I find the mix tapes that work best are the music that I love the most rather than the one I think people will like the most. I’ve also learnt that people don’t like a cd of all new music – they need some recognisable hits sprinkled between the new stuff. I’ve also discovered that the novelty hits that I think are really funny such as Nelly McKay (who incidently kicks Eminem’s rhyming butt in the linked video and is way prettier than he is) and Pizazz aren’t really appreciated at the end of a cd.

So, if I ever give you a playlist or a cd it’s not because I’m trying to win your heart with music, it’s more that I’m playing a game with your ears.