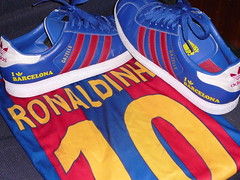 Favourite feature: The blue and maroon colours mixed with a bit of yellow

What attracted me to the shoe: I had two pairs of gazelles already so I didn’t need another but the colours were just so compelling. I also thought they would match my shirt.

Why does the shirt match:
The shirt was bought for me as a present from Barcelona and was purchased near the Nou Camp Stadium. It is the Barcelona football club shirt with Ronaldinho’s name and number on the back. Since Ronaldhino is one of the best footballers in the world I wear it with pride.

All this sounds great but what are they like to wear:  Just like all the other gazelles I own the shoelaces are constantly coming undone and the tongue tends to move to the left a bit so I feel like I’m always adjusting them. That isn’t a big deal though cause it means that I get to have a closer look at them all the time. 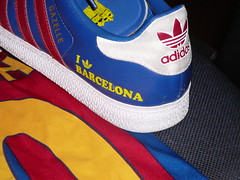 2 thoughts on “Sneakers and Kicks – Adidas Gazelles – I love Barcelona”