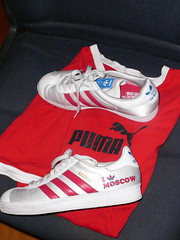 Most wearable location: Anywhere in the sun

Other people say: Nothing much really

What attracted me to the shoe: Mainly the fact that I’m a completist and wanted more city shoes. I purchased it at the same time as I bought the Rio shoe and thought I was being very extravagant buying two pairs of sneakers at the same time. I actually wanted the London bulldog shoes but I don’t think they had my size so I went for these which are the only womens adidas shoe I have.

Why does the shirt match: Some would say wearing a puma shirt with an adidas shoe is blasphemy or hypocrisy but who is married to the one brand these days. I’m a sucker for ring shirts so it is nice that the main colours are the opposite to the shoes.

All this sounds great but what are they like to wear: These shoes make me feel like tip toeing or being a ballerina for some reason. I have lighter shoes but maybe it’s bright white that makes me feel like I’m walking on air. It used to be that you were embarassed to have such white shoes but now it is a sign of being well off enough to have clean kicks. Like the Rio gazelles the sole is hard. 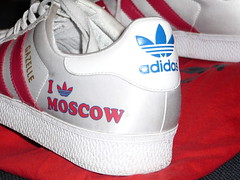