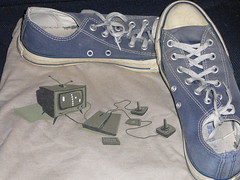 Other people say: “Common as mud”

What attracted me to the shoe: I’ve had many many pairs of converse (highs and lows) so if I was to go back to my original desire I think I would have to say it was because Bert and Ernie from Sesame Street had similar looking shoes. To me they will always have the 60s “Happy Days” and “Grease” association but since they have been a hit in every decade since (like the Bee Gees) it’s just as easy to think Nirvana.

Why does the shirt match: Both Atari and Converse have their passionate owners. The converses can go with virtually any t-shirt but I like this pairing the best. The colours may not be shared but they both have soul.

All this sounds great but what are they like to wear: Flat, no air in the sole, smelly, can take a beating but eventually the holes get too big and you have to throw them away. These shoes say “I’m cynical, I’m looking for indie cred but I’m laid back enough to not care if I don’t get it. I appreciate the classics”.