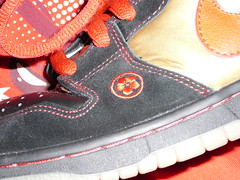 Favourite feature: The Money Cat on the inside

Most wearable location: Chinatown or Fireworks

What attracted me to the shoe: I’d spent the day shopping with the girls and most of the time had been spent scoping a shoe for Danielle. Around 5 I was left on my own so I set about visiting the final two sneaker stores I had left on my list which was way down the other end of the street. I’d seen the Chinese Money Cat series online but I don’t think I’d seen the black and gold before. I just liked them, they fit and I got to buy a pair of kicks in the sneaker capital of Australia. The guy at Evolve was nice too, he even complimented the beaters I was wearing.

Why does the shirt match: It’s my favourite  t-shirt – I think because it reminds me of the redhead logo on matches. I’ve considered putting the image on my scooter but I’m happy just wearing it. It’s pretty obvious why they match (the colour) but I also like the idea of the lady being the devil but the shoes protecting me from her. Deep.

All this sounds great but what are they like to wear: Comfort city. There is a lot of padding – even on the tongue because it’s the SB line (for SkateBoarding) so it’s designed to take a lot of abuse. I’d say they are my second most comfortable shoes. 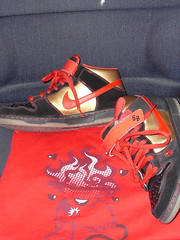