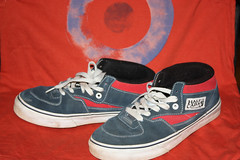 Favourite feature: Wide toe and padding around the ankle

Most wearable location: Kicking around the skate ramp or riding a Vespa

Other people say: No one ever really notices them

What attracted me to the shoe: First vans I ever coveted were some basic black and whites old skools my cousin Leif’s that she was wearing when she came back from Chicago in the 90s. I then saw some in a Harley Davidson Iron 883 ad which made me lust for a pair again (as well as the bike). I spent a lot of time checking out Vans in Thailand but in the end found I was looking for a ghost shoe. I found these for $50 in the Vans store at Melbourne Central Shopping Centre but they didn’t have my size. They sent me down to the foot locker store in the same shopping centre cause their stock records claimed they had some. I had to wait about 30mins for them to find it but eventually I walked out with them. Which was great cause the shoes I had been wearing were killing me.

All this sounds great but what are they like to wear: Super comfortable and roomy at the toes, but maybe a tiny little bit too spacious. I wouldn’t wear them on a long walk, but they make good daily kickabouts. 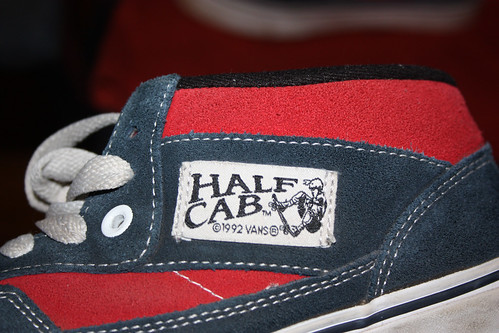