Getting to Vientiane, Laos

As advertised the bed at the Top Mansion was extremely hard. Also heard some sounds that seemed like bodies slapping together but oddly there was no grunting noises to go with it. There were male and female voices, so I’m guessing they were having sex – not as good as Portland though.

I was consumed by a huge fear before getting out of bed concerning how I was to get to laos. It was a real panic attack that I needed to overcome. I decided to call the minivan people at the airport to see if they would take me to Laos. Like most phone calls I make outside of work, it took a lot of goading to myself to actually make the call as I seem to be scared shitless of phones.

I set myself a rule that I had to ring at 8am and using Jay-z “empire state of mind” on MTV as my boost, I made the call. Poor girl wasn’t expecting an English accent asking questions. In the end she said she would call back and true to her word a man rang back in minutes. He essentially said I should just grow up and take the bus which was in walking distance from the hotel. I was like yeah, I’m stupid, just fucking do it you big idiot.

So after a big English breaky at the Irish clock (bloody awesome baked beans) for sustanance I unlocked the straps on my bag, shoved the bag on my back and unleashed my inner backpacker. Geez it was heavy.

After carrying my bag to the bus station I bought a ticket for Nong Khai and waited 1.5 hours. Suspect I had to pay the farang fare cause the girl said one price and he overwrote it. I guess it is the 10 baht white person tax. I watched monks get food bought for them, people in rattan hats and baskets selling fruit and jumbo drivers harassing the people getting off the buses. 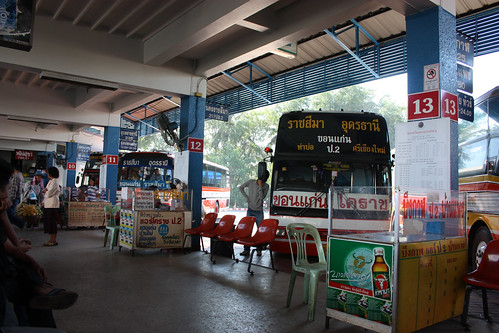 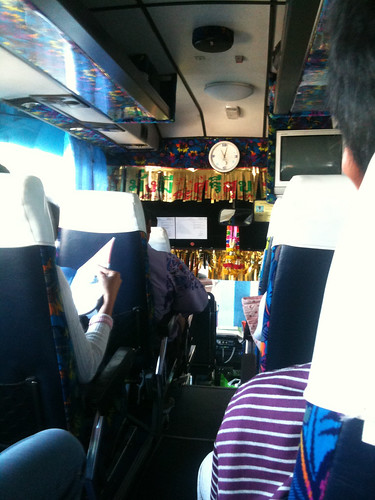 At 11 I got on the bus and calmed myself listening to piano songs by gonzales. Things were turning out easier than I expected and when I actually got moving I was really happy. The bus stopped at one point for the police to check ids but he wasnt interested in mine. Finally people started getting off in bulk and all I heard was “to Palau, to Palau” I wasn’t going to palau so I didn’t care until I realized they were saying “to Laos”. I jumped off and was shuffled in to a tuk tuk heading for the friendship bridge which spans the Mekong between Thailand and laos. 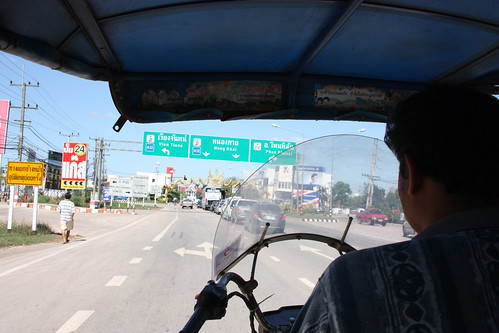 Thinking awesome! This is easy! Plus it’s my first ride in a motorbike taxi! My heart sunk a little as we stopped at a little shop that said visa. I said to the American-Laos lady I had made friends with in the tuk tuk “don’t we get the visa on the bridge?”. Scoping it out for all the rorts and being suspicious the whole time I filled out the visa application while a black cute puppy chewed on my sneaker laces. When the Thai lady told me the price – 1800 baht (or $33 aud) figured it wasn’t much more than the price I’d have paid in Australia. Figuring I’d get a guide out of it too I cut my losses.

Back in the tuk tuk and he drops us off at the Thai border. A quick exit through there, then on to a mini bus, all the while getting the signs in English pointed out to me. Over the friendship bridge (which was an Australian innitiative – yeah Aussie day!) and in to Laos visa land. Once again you get some forms to fill out from one window, then you take them to another window (when filled out) then wait for them at another window. Unfortunately we had to wait at the second window cause they had “break for lunch”. An hour or so later we were walking through the border and on to a mini bus that had been arranged for us. I could have done it all without the guide but the mini bus was a great touch at the end. Not that I was planning to use a guide. 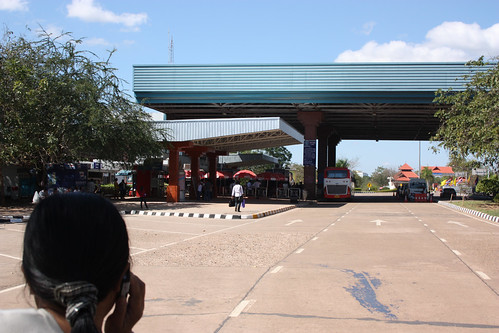 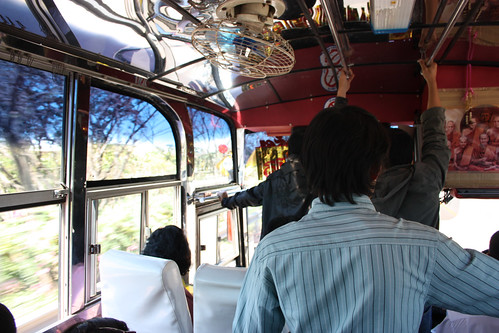 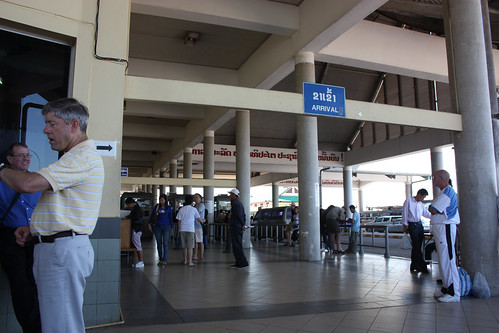 During the whole trip though I made friends with Loo and Too – a married Laos couple. They had been living in Minnesota for 20 years and she was just back for a visit. She asked me about my marital status, if I had kids and how many brothers and sisters did I have. Very family focused. She helped me out in the Tuk Tuk with my bags and I helped her fill out the visa forms. She was definitely more Laos than American.

We dropped her and her husband off at the bus station then on to the hotel for me. I hadn’t booked anything and the driver thought the place I wanted to stay in was expensive at $20usd a night. He suggested B P hotel nearby but i persisted with my choice. Of course it was full when I arrived so I was going to lug my shit all the way back to the hotel he suggested but instead I just said sod it and booked in to the Inter City Hotel which is right on the Mekong River. It was only around the corner from my first choice and it was on my list. I had a choice of te $55 or $35 USD rooms a night and after looking at them both I took the small, no river view room at the back of the hotel for $35 usd. Chucked my stuff in, sculled a bit of water and I was off to explore. 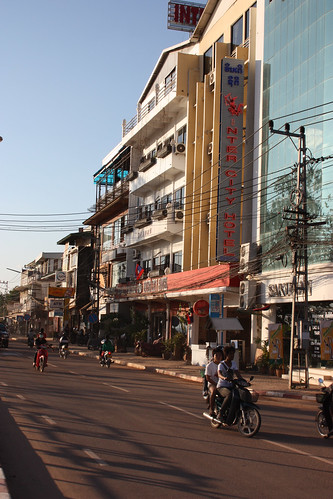 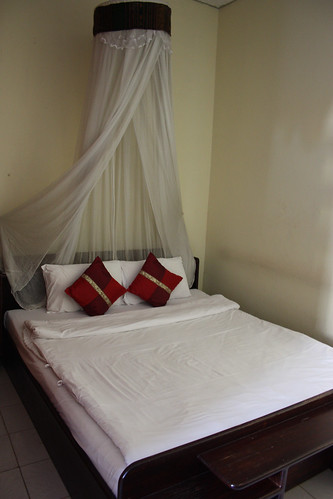 Knowing that Laos has some sort of informal curfew I didn’t spend long in my room so as to make the most of the afternoon. Figured the best thing to do was to walk to the bus station to find out what times the buses left for Vang Vieng.

What is immediately striking of Vientiane are the wide streets, large well maintained footpaths and trees that line the road. French influence is eveywhere, from the Rues and Boulevardes, to the arch de triumph type building at the end of Avenue Lane Xiang called Patuxai. Apparently the concrete to make it was donated by the USA, but it was meant for the airport runway instead. So now they call it the vertical runway. 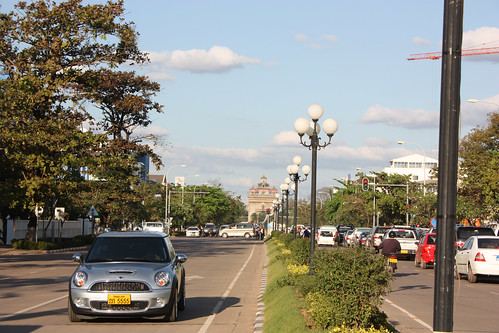 I walked past the museum and out of nowhere was “That Dam”. It is one of those circular type buildings that narrow in to a point. It seemed very old (to this Aussie anyway) and is called a stupa. The rumour is it was once covered in gold until Siam armies carted it away. These days it sits in the middle of a roundabout while scooters zoom past. 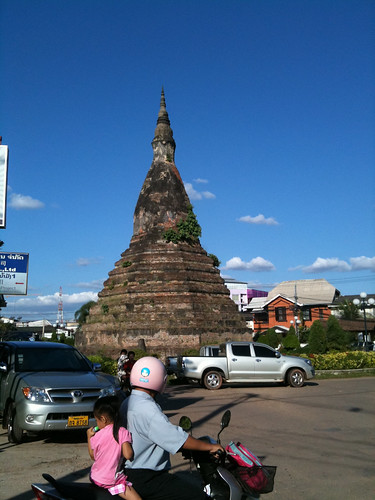 At the bus station A laos guy came up to me and asked where I wanted to go. He suspected Vang Vieng and he was right. He pointed out the shitty bus that I’d have to ride in for five hours or otherwise take the VIP mini van for 3-4 hours. He wasn’t trying to sell me anything, I think he was just up for a chat. I considered the fact that the buses leave at 9.30am, take 4 hours and the river is no fun and cold after 3pm and decided it wasn’t worth going for just one night – especially when I had to get back to Udon Thani the next day. So regretfully I had to ditch my idea of tubing and getting drunk down the river in Vang Vieng. If I had been able to fly a day earlier I may have had a chance but for now I was happy to stay in the lovely Vientiane.

Next to the bus station is the Talat Sao mall and markets which I wandered for a bit. Always stopping at the sneaker stalls for a closer look, I thought it was funny that they had signs up saying we should shop using Kip only. I had gotten 200,000 Kip out from the bank which was about $26 Aud. But they do accept Thai baht and us dollars. 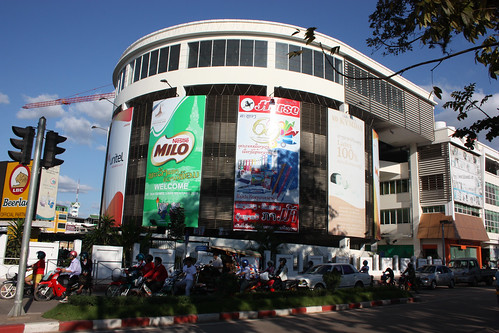 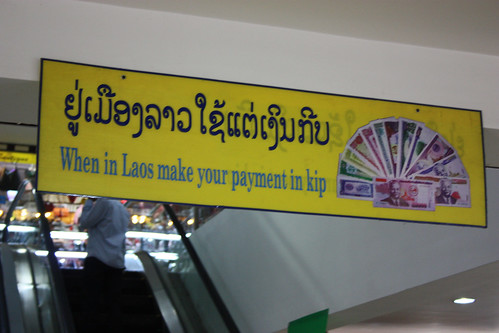 Walking back through the hot sun I was greatful for the trees as I watched monks with their umbrellas or as they got on the back of scooters for a ride. My return walk was via the Mekong River. I think I saw at least 5 wats on my walk which was making it the most religious city I’d been to yet. 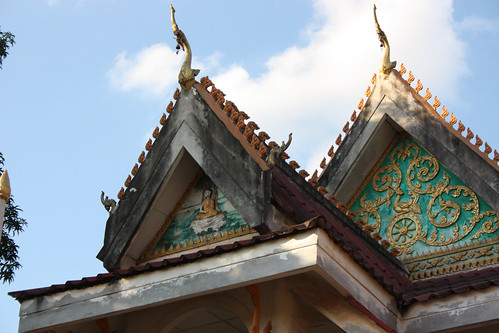 On the Mekong River road there are lots of restaurants, but there are also stalls on the riverbank. Currently there is lots of work going on, with dredgers and earth movers everywhere which disrupts both the sound and view. But in the end it will be good for the area as it is to prevent collapses caused by the river. 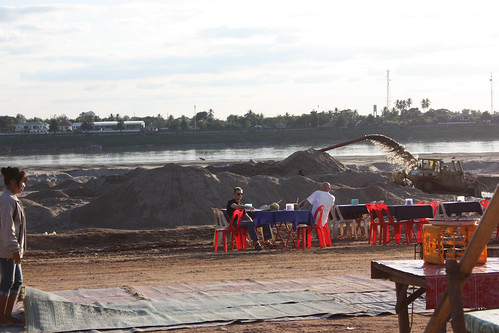 I saw a little covered area with mats and cushions on the floor with a whole bunch of people drinking beers and I thought I wouldn’t mid trying that since I hadn’t eaten since breakfast. Ordered a Lao beer (big – like a tally) and watched the other travellers around me write, relax and read. As the sun started to set the earth movers started to pack up for the night. As one of the guys came by he started doing twirls for the girls watching which gave us all a big laugh. Even managed to video it. 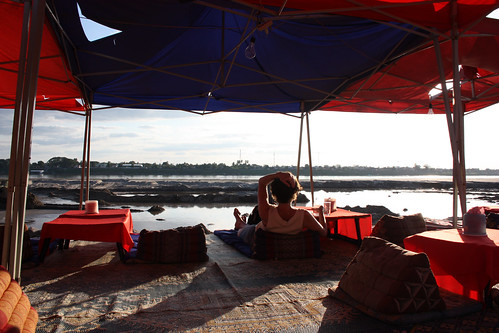 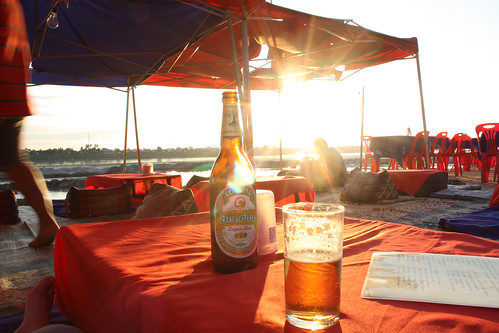 Eventually the sky got the colour of mekong red, more people came past and lots of photos were taken. It is as stunning as advertised and my iphone shots dont do it justice. I ate an incredibly spicy beef lap and helped a guy and girl find the night markets using my iPod, then headed back across the road to go to sleep. The day ended with me in a much happier mood than when i’d began, especially as I had considered this day the scariest part of my whole trip when I was planning it. 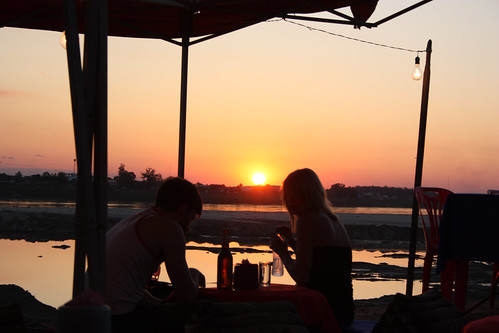 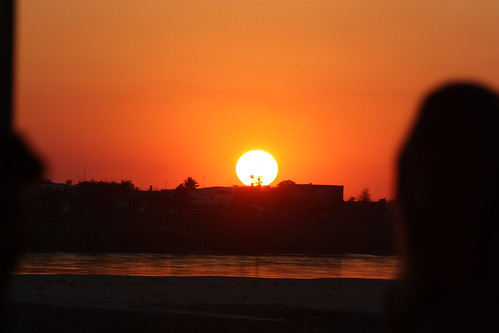 2010-01-26 02:13:30
amyob: Happy Australia day from an Aussie a little further away. Aiming for the friendship bridge today which was built by Aussies.