Final morning in Phuket for a while

Probably had the worst nights sleep so far due to what seemed like a party in the cafe downstairs and the hardest mattress I have ever encountered (although they say the place I’m staying at tonight has hard beds too). I think that the fact that there was only a meager floorboard separating me from the cafe (I had glimpses of it through cracks) didn’t help the sound deadening any. No matter though, in Phuket nothing happens until 11am. 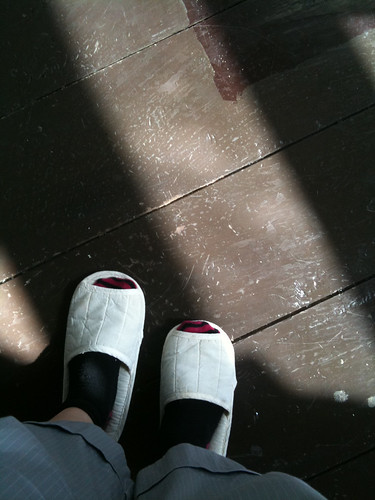 I of course was awake at 8, so filled in some time reading my book and packing until 9. Shower, then out in search of breakfast. I know that some of the best restaurants aren’t the best looking, but the biggest draw to me always ends up being something that looks good. It’s actually quite annoying that I can’t overcome it, but it’s how I ended up in the Phuket Gallery Cafe eating muesli and iced coffee foe breakfast. Pleased to see that they serve muesli the same way here I decided i will make it my breakfast of choice when I get home. 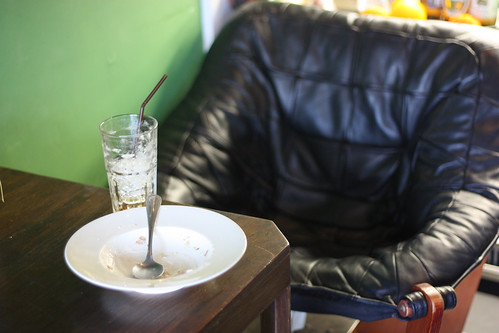 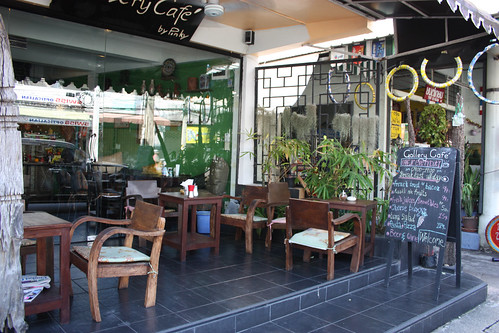 Having a few hours to kill I wandered the streets aimlessly. I noted that the biggest most expensive and grandest stores are for scooters and banks. No surprise considering how many scooters there are on the road.

Back at the hotel I was relieved to see the owner was awake because I was worrried I’d have to check out without him being there. I think his room is under the stairs. I asked him to order me a taxi and then we chatted while we waited.

He told me that the bikes in the back room were owned by two check brothers who had ridden all the way down from checkoslavakia. They were now spending 3 days in Hong Kong before returning today. The guesthouse has only been open a month, which is why he needs to improve a few things, like putting a shelf in the shower and a hanger for towels in the room. He also forgot to give me a key at first and then we both almost forgot to give it back. It probably was the worst place I’ve stayed so far but it’s also the cheapest i’ve paid on Phuket Island. The guy is a great artist though and I hope he paints some of the place. He also taught me how to say thankyou in Thai.

At 12 my taxi arrived but I suspect it was just his friend with a nice honda taking me for a drive. I didn’t mind, car was clean, he drive safe and it cost me the regular price to the airport. I did cause him some troubles when I only had 1000 baht notes. He had to race in and change some cash but was kind about it.

Check in at the airport was hassle free but I found myself really grossed out by the English man behind me making out with a Thai woman. He was making all lovey dovey sounds which is what was the gross bit. Now I’m just hanging in Phuket Airport ready to head for Udon Thani. 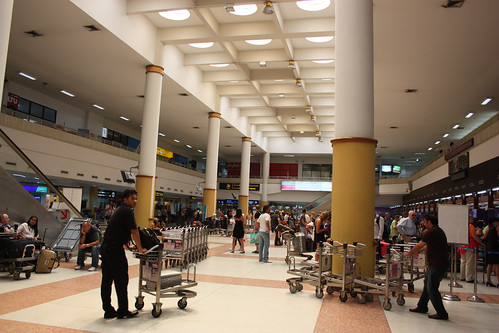 The reason I chose to come to Udon Thani was because a lady (Wendy aka Wilaiwan) I work with comes from here and I thought that was good enough reason to go. What was interesting though was whenever I told a Thai person I was going there they scoffed and wondered why the hell I’d want to go there for. Made me a little worried.

The flight to Udon Thani was great, comfy leather seats, very jetstar like, awesome landing. I was seated next to a girl who works in Phuket but was going home to Udon with what I think was her mum. She asked where I was from and when i replied she said Ozzie, Ozzie, Ozzie! I had to laugh. Gross lovey dovey English guy was seated with his girlfriend right in front o me (of course) so I plugged in the noise cancelling headphones and enjoyed the clouds from my window seat.

With every airport arrival there is always an element of fear that you’ll get stuck there, but once you realise that these places are set up for taking people places all the time, you relax a little. At any rate the Udon Thani was the quietest and calmest airport I’ve ever been in. A few minutes after collecting my luggage I had bought an 80 baht ticket to my hotel and was getting in a mini van. When you see limosuine service you think pah! So expensive! Until you realise you are talking a difference of 80 cents.

Of course in the mini bus was my new nemisis lovey dovey English man and of course they were going to the same hotel as me. Top Mansion. 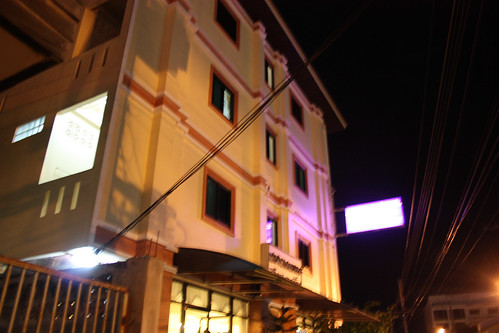 School had just finished so I saw a whole lot of little Wendys in school uniforms getting in buses or riding scooters home with two of their friends on the back. I live Asian uniforms especially little tubby twelve year old boys in sailor suits. So manga.

The first thing I noticed about the place was that the signs don’t have English subtitles. In Phuket everything had two languages but here I was on my own. The second was that there are a lot more trucks and they are a lot newer. Things seemed bigger here, like roads and buildings. Cleaner and with more infrastucture too, like big sidewalks and gutters.

After dropping of other people at a couple of bus stations we were placed in front of the hotel. Unfortunately for the Iranian guy in our mini bus they didn’t have any rooms left for him so I was glad I made a booking.

My room was on level 4 and without an elevator it meant I had to lug my bags up 4 flights of stairs. Great room though and the cheapest yet at 350 baht ($12 aud). Big, clean, lockable cupboard, aircon, tv and balcony with a great view of the farang bars down the street. You see, the thing about where I am staying is that it is also the sex tourism main strip. In every bar on my street there are just dozens of white men (farang) and a few Thai women hanging out with them. In my wandering around town I saw maybe three other white women. For now the room seems great, but I wonder if I’ll get a sex show from next door like we got in Portland sometime later tonight. The sign says though that they have to be quiet after midnight. 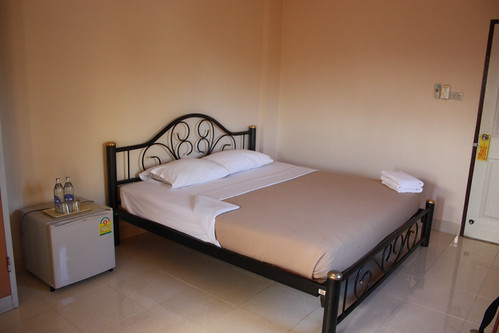 While it was still light I cranked on the aircon in the room then walked over to central plaza. It’s a four storey shopping mall that is a favourite of wendy’s. There was something soothing to me about wandering the mall, even though everything was in Thai. Families were just going about their normal business and it was way quieter than say chermside or even garden city. 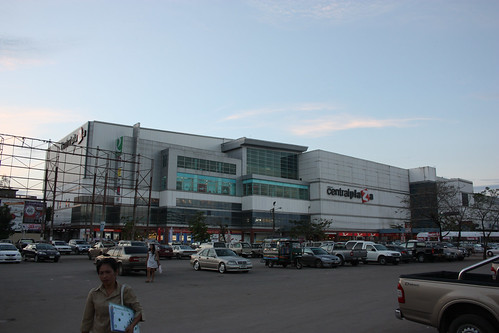 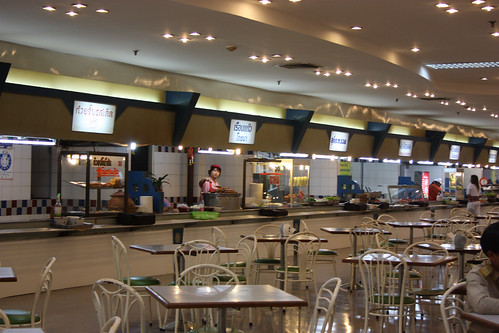 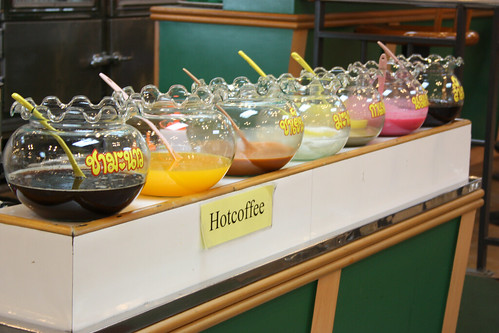 After I’d had my fill of aircon wandering I headed over to the bus station to investigate getting to Laos. Unfortunately the signs said you needed a Laos visa to get on the bus and lacking one meant it’s not going to be easy for me. I’m debating to either catch a bus to nong khai from the bus station or go back to the airport and get a mini bus to the friendship bridge border that way. I’ll try and do a little more research before deciding.

After the bus station I walked down to the night market near the train station. Lots of food and drink to choose from but very difficult to pick because all in Thai and nothing for me to point at. I wandered the stalls and in a remote province in northern Thailand in a small stall I found the lobster Nike SBs I’ve been pining for. No idea if they are fake or not but I can’t fit the bastards in my bag! I had to be content with a picture. But if they are still there in two days when I am back in Udon then I might find space. 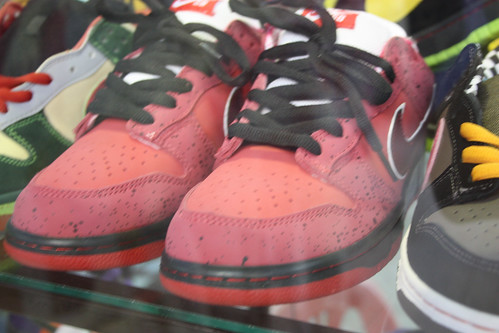 I finally found a place that had English signage for food and although I was tempted by the first cooked insect stalls I seen I ended up with a chicken salad and lime soda for 54 baht ($1.80 Aud). You can barely get the drink for that much in Australia. Phuket was expensive by these standards! 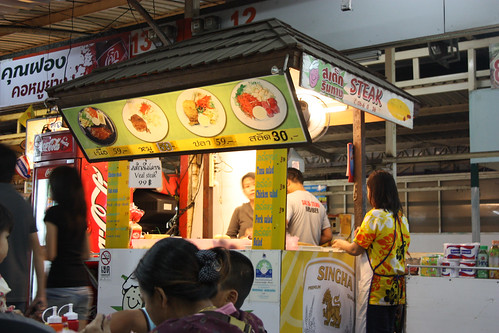 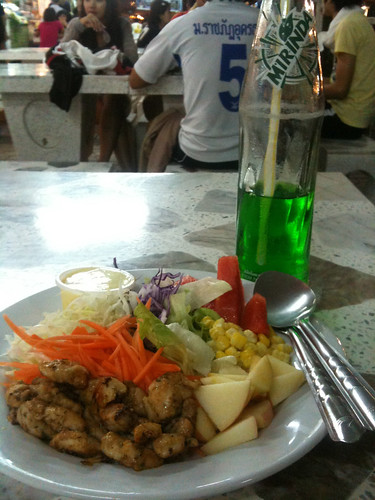 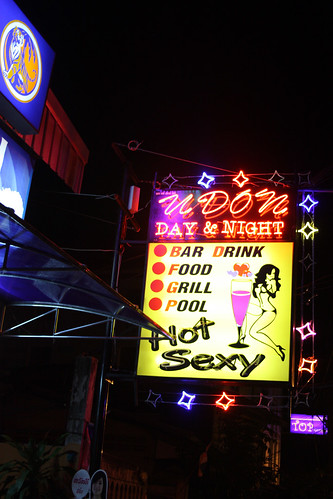 Back in the hotel now to enjoy my $11 of luxury. Tomorrow I may go to Laos and if I do, I can’t guarantee internet connectivity for the next couple of days.