From lowest of lows to a pretty good wash

Woke at 7.40am feeling sickly from the night before and was thinking I’d take a boat at around 10. Only problem was that there was only one at 9 and 1.30. Not wanting to spend all day in Ton Sai I packed up quickly after a shower, grabbed a coffee and croissant and strolled down to the pier.

Getting on the boat was fine but as I forced the coffee down waiting to leave I started to feel ill again. Blogging about the bucket I drunk the night before made me even iller and eventually I threw up in my mouth and swallowed it. Gross I know. But as I got up to find somewhere to be properly sick in private I projectile vomited all over my clothes and the aisle of the boat (I was in a single seat so no one else got hurt). Luckily it was just coffee and water (no chunks) so it wasn’t too acidy. The guy at the fridge counter calmly handed me a toilet roll while the three people behind me at the back of the boat reeled back in horror. In my vomity disgusting clothes I washed up my own bile from the hard floor. When I was finished I asked for the toilet and a kind American lady offered to wash my clothes for me which i declined. I grabbed some shorts and my bedshirt and changed down in the toilets. Back in my seat I was complete in my misery for the 1.5 hours trip back to Phuket. Not even my iPod could soothe me to feel better, even though I was thinking how funny it was that I had vomited all over the boat before we’d even left the pier. No more buckets for me.

At the pier we were shepherded in to mini vans according to our destination – much better organized than expected. I ended up in a van with about 6 euros and an American I was in my head calling Vampire Weekend due to his oxford blue pin stripe shirt, kahki shorts and collar held up high. Later when he had to sit next to me I noticed the reason for the high collar was a big hickey bruise on his neck. He must have met an Australian girl who wanted to leave her mark I reckon. I thought about bein cheeky to him about it but the poor guy was so nervous about his luggage that I didn’t want to overstress him. Being the person in the far back of the mini van meant of course that I was dropped off first. The others were taking their chances with the mini van driver showing them a place, while I was taking mine on a suggestion from the Bodega owner in Patong. Geared up for a long walk along Soi Romanee I was pleased to find the place only a short stroll away. 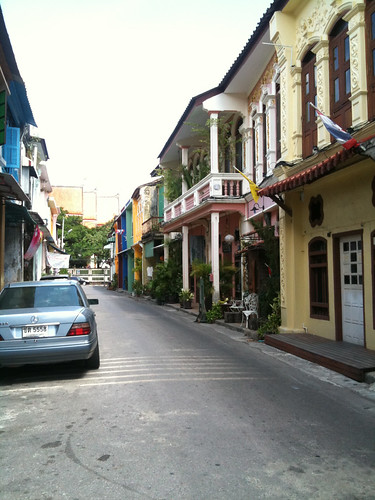 The name of it was @9 and the art and triumph motorcycle immediately appealed to my senses. Unfortunately there was no one around for about 20 mins so I tried calling the number on the business card at the desk. I had a weird conversation about booking a room and what I thought them say was they had none. I hung up dissapointed when a guy walked in and I asked him for a room. He showed me the showers and toilets downstairs then the aircon room upstairs and I was sold. The room is nothing fancy but has big windows and air con. The shower has smooth rocks and bricks to stand on and is actually quite nice (though cold). I quickly took advantage of it to get rid of the lasting vomit smells then enquired about a laundry. The guy (who also happens to do all the great art in the cafe) doesn’t speak super English but understands it well enough. He made a phone call that didn’t work and then he gestured to me to come with him. 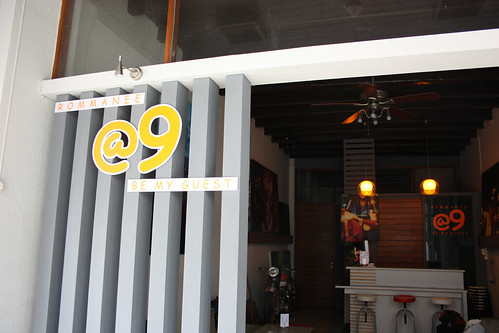 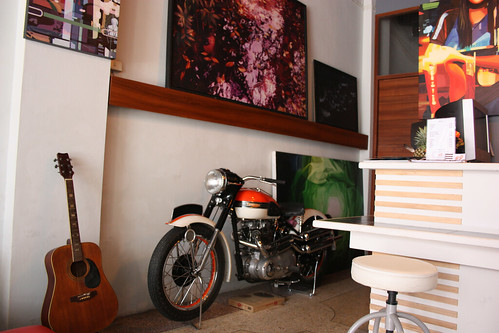 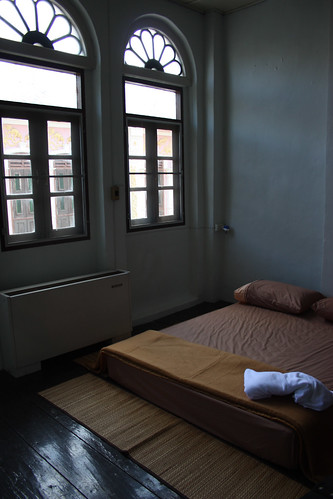 We walked across the road and in to this store which turned out to be the grooviest jazz cafe ever. He chatted to his friend who owned it (@9 guy said said jazz guy was his big brother) and the next thing I know I’m being whisked upstairs and taught how to use a manual washing machine in the jazz guys personal laundry! Jazz guy told me lots of shops shut on Sunday so no laundries open. He told me his wife lived in Bangkok with two kids and he comes down here to open the jazz cafe in the tourist season. He is a lawyer and a percussionist as well as a cafe owner. While we were doing laundry he showed me his huge jacuzzi which he made himself and takes two hours to fill. He can sit up there with candles in the nude overlooking the garden with no one able to see. It was really great. He also showed me his work area and bedroom where he can sleep up to 8 of his friends from Bangkok. It sort of sounds sleazy but it wasn’t. We finished his laundry together while he showed me how to work a manual machine. Lots of filling up buckets, filling up machine with water from the buckets, emptying the washing water essentially on to the bathroom floor to be drained away. He also taught me the intricies of footwear inside Thai houses and gave me stuff to read while I waited and he went downstairs to attend to his guests in the cafe. It was bloody brilliant to be extended that kind of hospitality after the morning I had. I tried to repay the hospitality by assisting him hang his clothes. You can’t help be friends after hanging up someones underwear – not that he asked me to, I just happened to end up doing it after he’d left to go downstairs. Probably crosses some cultural boundary but I maybe got away with it. I asked to pay him but he said no charge since I was friends of his friend. I told him I would be back later for tea and the clothes and now I’m back in my air con room chilling while my clothes dry. Now that is one experience you don’t get staying in a big hotel an it has really lifted my spirits. I didn’t have my phone with me so I haven’t got any pictures, but I’ll take some when I go back to get my clothes. 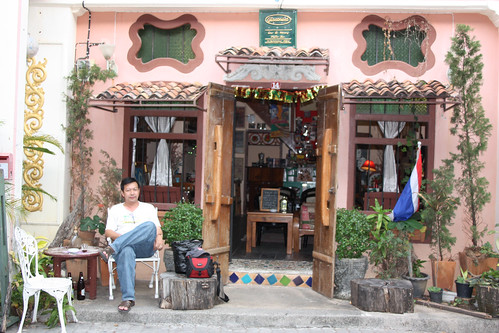 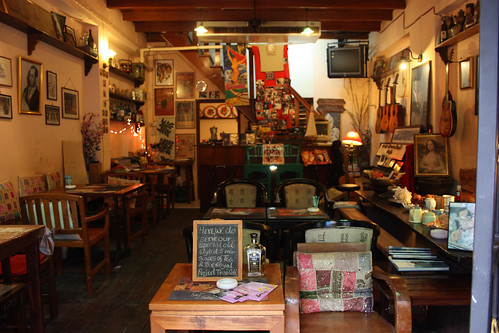 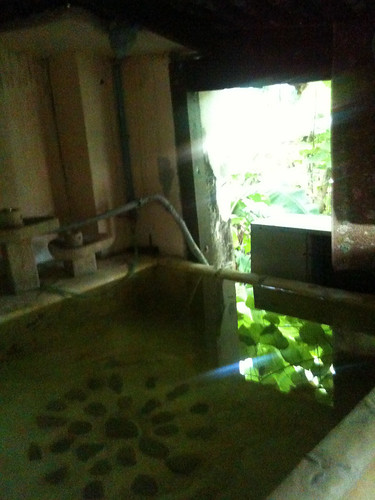 The guy also told me on April 13 they will have the water festival in romanee street for the first time. He is getting blocks of ice with colours in them to sit on and getting the water company to put in a pool for the day for kids to swim in. Then he’ll get a jazz band to play nearby. I was sad that I will miss it cause it sounds like fun.

The street I’m staying on has buildings in the style of sino-portugese and it does remind me of Macau a little. It’s a real artist Bohemia centre and I’m looking forward to exploring it later when it’s a bit cooler. 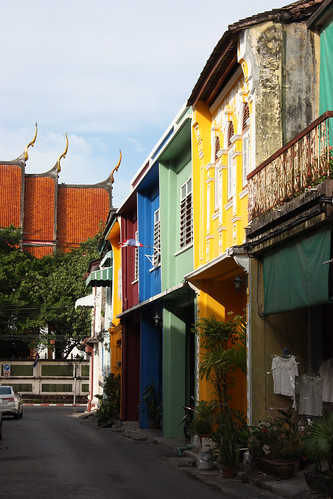 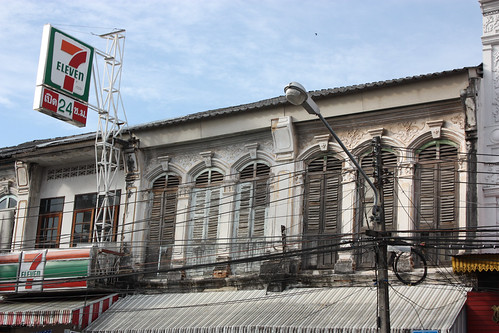 After yet another afternoon snooze (still not operating on Thai people hours) I headed out to explore the old town. Being a sunday virtually everything was shut which is why the town seemed so quiet. Made for easy walking though, although the thongs I bought have aggrevated an old soccer injury making it a little painful to walk. The top of my foot got trod on and it must have never recovered properly. Think I’ll get it checked when I get back cause it’s not right.

I walked the blocks of the old town with all the sino-portugese architecture which is partly done up and partly rundown. I wanted to stop an buy tea from my laundry friend but he had gone AWOL so I stopped in a coffee max on the fountain circle for a strawberry smoothie. I was at the point where I needed something so as not to dehydrate. And I didn’t want coffee after what I’d done in the morning. 🙂 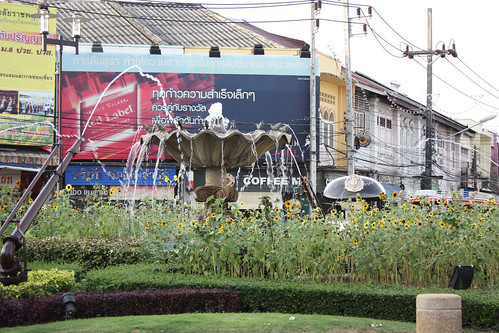 A modern satellite, yet no sanitation: 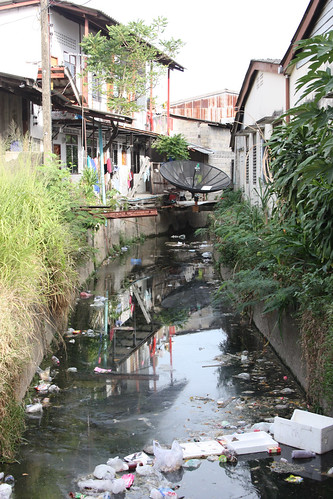 The fountain was actually kind of cool because they had used tank pipes to launch the water in to the pool. I then headed of in search of the natural restaurant since I’d read it was good and some guys checkin on gowalla backed it up. It’s a really groovy treehouse type green leaves, water fountain place. I ordered the most intriuging drink on the menu which was a mint soda and not wanting too much to eat I went for a noodle and chicken dish. Expecting a clear soda with a sprig of mint in the bottom I was shocked when my green jar of ice turned up. It was really refreshing and totally hit the spot – even though I’d finished a smoothie only 2 minutes before. The noodles were the perfect size for me but when I tasted them I was in heaven. Best noodles I have ever eaten and best meal ive had so far in Thailand. Swooning I was. Then when I went to pay I only had 1000 baht and apologised when handing it over. Then the guy and I had a calculator fight when I thought he was giving me too much change. I thought it was 175 baht but it turned out to be only 125. Best $4 I have ever spent. I cleaned out his change till though and in the end I told him to keep the thirty or so coins he was about to give me. Don’t think I’m a big shot, it was only probably 50 cents or something. 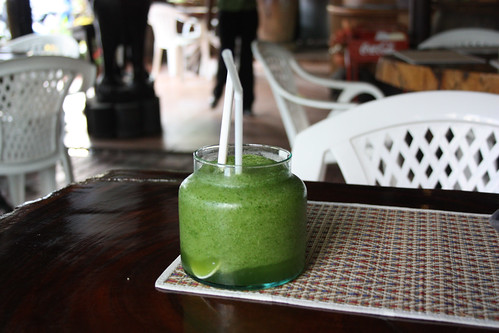 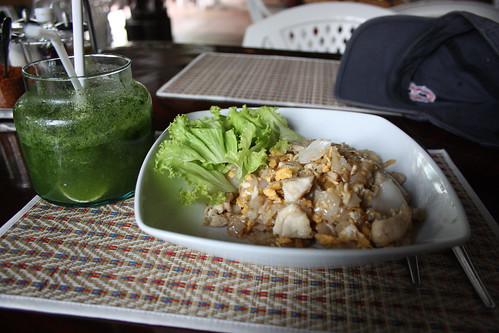 It’s funny too, the things that happen in Australia without you thinking about it. Like no cats or dogs in restaurants (here it’s weird to not have one) or cats with balls (rarer in Aus). Thailand is what the western world would be without puritans. They don’t legislate for morons here, so if you don’t look when crossing the road then good luck to u kid. It’s good to have a bit of danger – keeps u awake.

On my walk back I found a super cool gold dragon that I took photos of while avoiding the poor sick feral dog nearby. I stopped in and had tea on the street with my laundry jazz man. He had filled his jacuzzi and it looked pretty awesome. Turns out his coffee shop is famous in the lonely planet guide. It’s called glasnost and lots of tourists walked past as we drank his really good tea that his mother handed down. 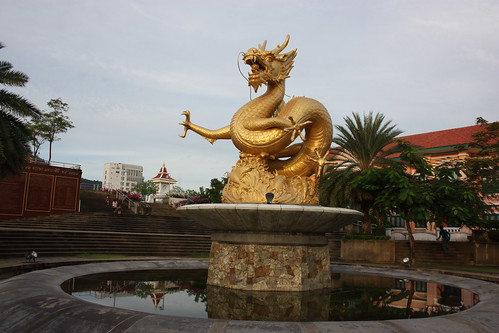 After collecting my laundry I headed back to the room. I’m now lazing on my bed (which is a mattress on the floor) listening to the jazz music drifting up from the guesthouse cafe downstairs. Really cruisy. I am suffering a bit from travellers tiredness – I think cause I know I won’t be sleeping in the same place for the next 4 or so nights. Moving, moving, moving. Next stop, northern Thailand – Udon Thani.