Breakfast was included as part of the hotel fees so I had my first taste of Lao breakfast. A bit of noodles, some tofu with pork balls, some tiny bits of bacon mixed with mushrooms and corn and some rice. I could have had eggs cooked for me but I wasn’t really up to them. Booked another night in the hotel and then headed off to the national museum. 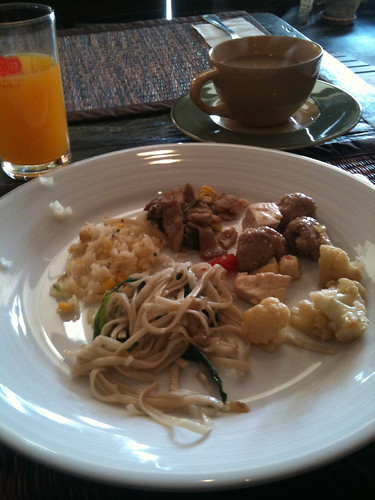 The museum is housed in what seems like a relic of the French era. It’s not very well maintained and the exhibits have just printed out bits of paper beside them, but it was good at opening my eyes to Laos history. There were many displays of pottery, but what got me excited was a jar from the plain of jars. The plain of jars is basically a plain with huge jars on them. The villagers claim they were pots made to make booze for an army to celebrate a victory and I liked that reason the most.

There was much about modern history too, like their war to get rid of the French using money from the USA, then their war against the Americans which left their country buried in the land mines up in the north. The explanations next to the photos had a bit of political slant, like “the USA and their puppets attacking” which I think was funny but saddening. The museum cost 10,000 kip to get in. I’ve included photos of the jar from plain of jars and a peacock chair that is meant to go on top of an elephant. 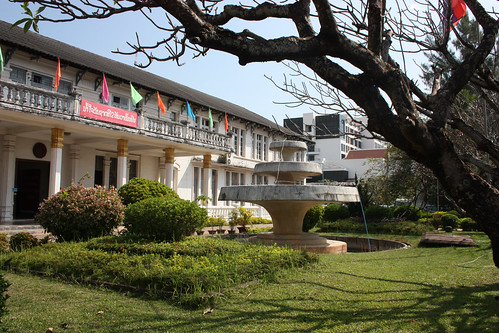 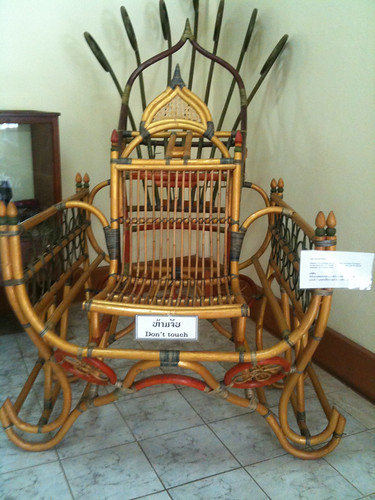 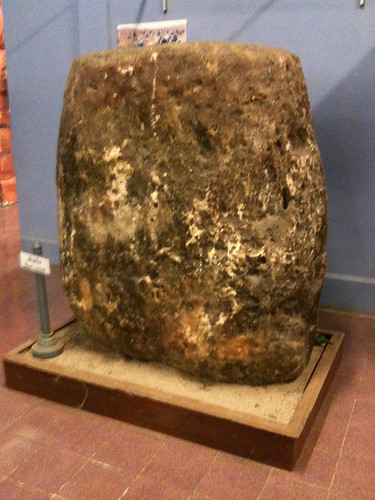 After that I decided I wanted a baguette from a French indochine place, so I went to what is meant to be the best in the city, La Banneton. Decided to sit outside to watch the street action which was also a curse. Turns out flies and beggars like to frequent the shop and neither are shy and respond to shoos very well. I don’t like to give beggars money on principle even though it probably seems cruel. Some were deformed and others were trying to sell gum by pinching the arm of the guy at the table next to me.

The cafe was mostly empty when I arrived, but a group of westerners arrived while I was eating my roast beef, potato and mustard baguette which was yum. I amused myself listening to their conversation as they all seemed to be people who had been in Laos for a fair while and they were discussing being interns. They were a mix of nationalities, Canadian, English, Spanish. I had thought one guy a brave tourist being dressed completely in white, but that was explained by the fact that he wasn’t a tourist. 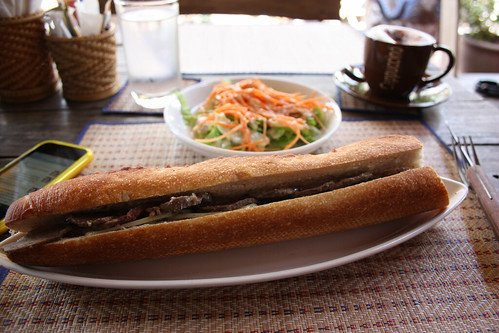 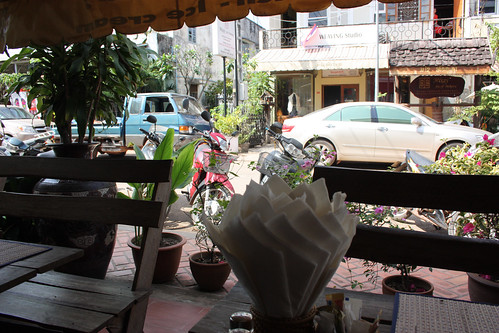 They say you haven’t really experienced Asia until you get the runs, I’m proud to say I experienced Asia today. So after lunch I headed back to the hotel to pay my respects to the porcelain bowl. It wasn’t really bad, but it did limit how much I could do before returning to the hotel. I had about 3 hours between bouts.

So for my second outing I decided to get a closer look at Patuxay – the arch de triomphe knock off. It was a long and dusty walk because I took the back way and I was parched by the time I got there. Sat in the park in the shade of the arch and watched the tourists like me take photos of the Buddhas inside. I didn’t want to walk up 7 flights of stairs to look at Vientiane from up high – being both sick and lazy, so I just observed the not so pretty cement. 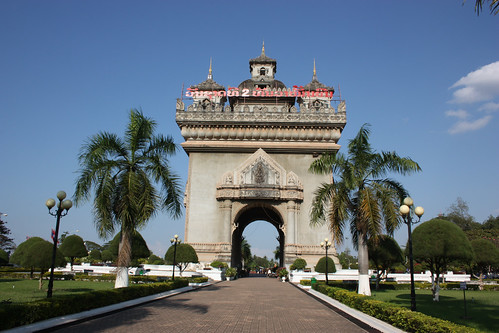 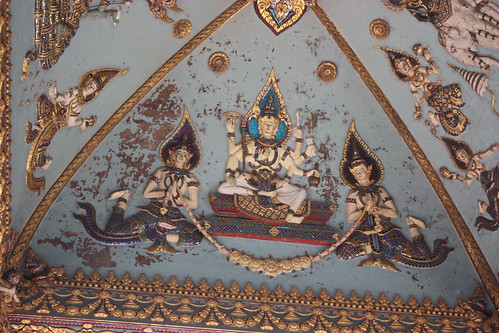 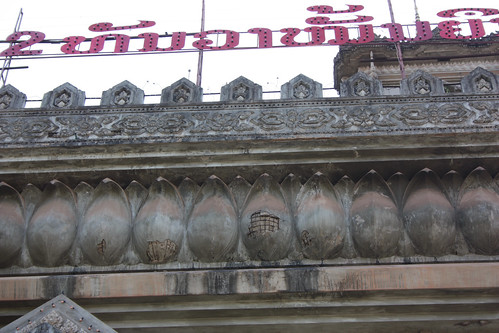 Returning to the hotel I went via the bus station, this time checking the bus times and price to get to Udon Thani – my destination again tomorrow. Took some little back streets on the way back I found a lovely big fountain with lots of coffee shops and restaurants, those damn French know how to do that shit. 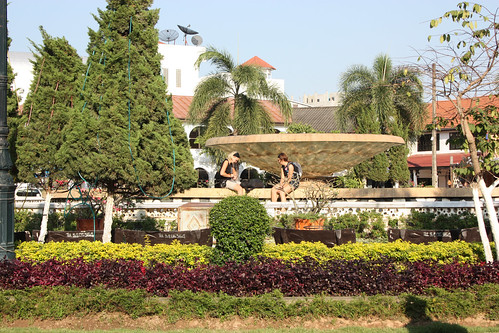 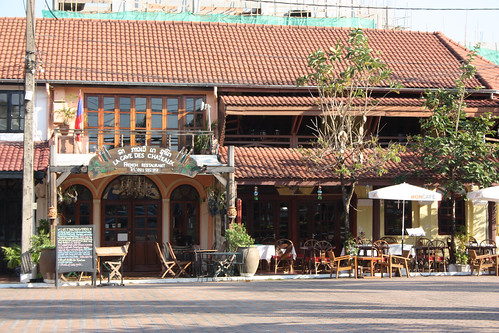 A chat with everyone at home via skype and google chat while the movie misery played in the background then I was out again for dinner. I was going to try and find the night markets but google maps was taking me places i didn’t really want to go (i.e dark), so instead I headed for the cultural centre. I had seen and heard that there was some sort of b boy dance show on so I thought I’d check it out. The price was 15,000 Kip, so being a little short on Kip (had to save some for the bus ride tomorrow) I had the choice between dancing or dinner. Given my sensitive stomach state I chose dancing.

The show wasn’t the adidas b boy hip hop show I was expecting. Instead it was an artistic expression using b boy dance moves. The first one was a Japanese girl who combined her dancing with origami. It was a bit slow in some places but to me it was really excellent fusion and she was an incredible dancer – really fit and physical and definitely b boy down to the many headspins she did. 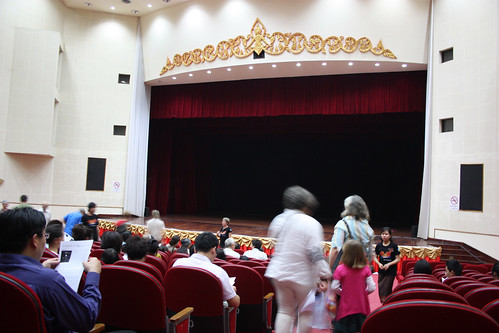 The next was a group of able and disabled kids, blind musicians, down syndrome wizards and kick ass b boy moves. Really sweet. Finally there was a French guy who was a little bit boring, but the musician who was with him spiced it up dramatically. He even played something that sounded like a didgeridoo (but looked a little different). The dancing had me yearning for a little hip hop though and I was pleased that at the end they had a whole bunch of Laos dancers get up and do some freestyling b boy dance moves. That ended up being more impressive to me.

The walk back again took me down the Mekong River road where there seemed to be a night market on – maybe the one I had searched for was across from my hotel the whole time? 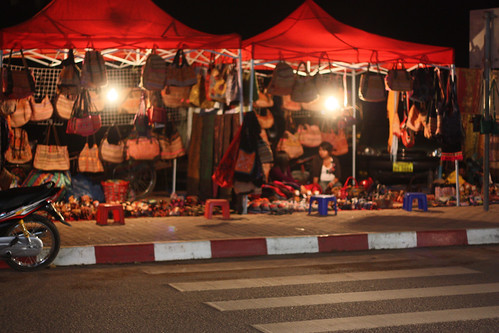 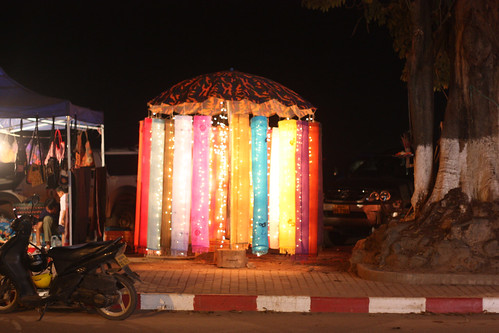 Tomorrow I’m back across the border in to Thailand and Udon Thani, where I will interview people about Wendy to find out all her secrets. 🙂