Travel day today and I still wasn’t feeling the greatest. Had free breakfast in the hotel early and discovered that I still needed the services of the loo. Once more I was glad to have bought my travel doctor kit, which had both instructions and drugs for my particular affliction. I was going to need help for the 2 hour bus trip back to Udon Thani. 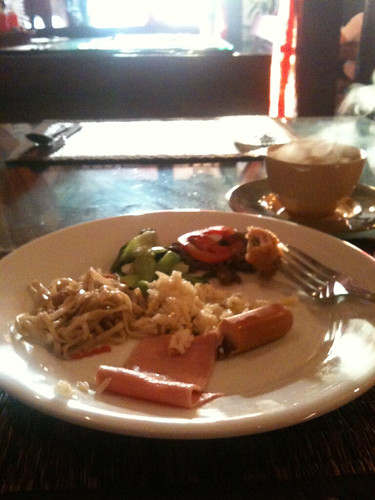 Was ready for a fight with the tuk tuk guys about the cost to ride to the bus station since i didn’t have much money, but the first price he quoted was cheaper than I’d seen other people get, so I took it without bargaining. Lame I know, but I wasn’t in the mood to discuss. It wasn’t one of the motorcycle ones but more like the mini van with wood seats. 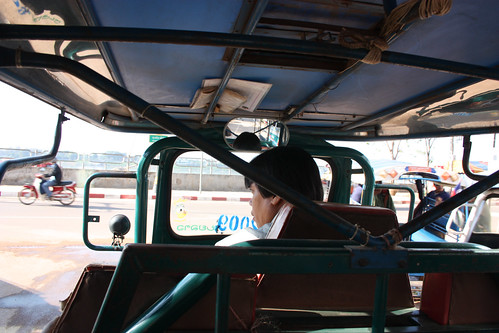 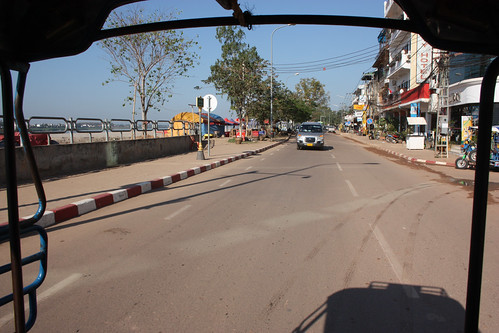 Within 10 minutes we were there and I was at the counter buying a direct bus ride back to Thailand. Had to wait an hour after buying my tickets but I killed the time chatting to two young Aussie girls who were going to Nong Khai on a later bus. They were from wagga and were making me jealous with their tales of Vang Vieng and Luang Prabang. I was please they agreed that I shouldn’t have gone to Vang Vieng cause it was too far. They had fun on Australia day there though.

Eventually the bus arrived and I marveled at it. There is not only a bus driver but an assistant who cleans the bus, makes sure all the seats are up, marks and loads the luggage and hands out passport forms. Your seat is allocated and you are sort of locked in to the bus once you are on since there is a door between us and the driver. You even get a tray table with cup holder. 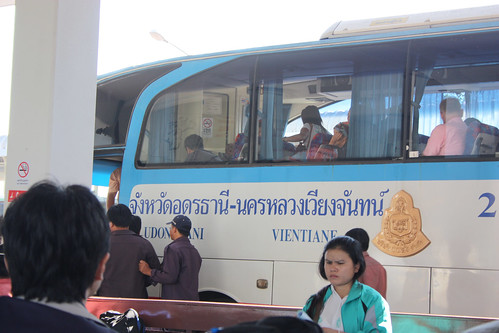 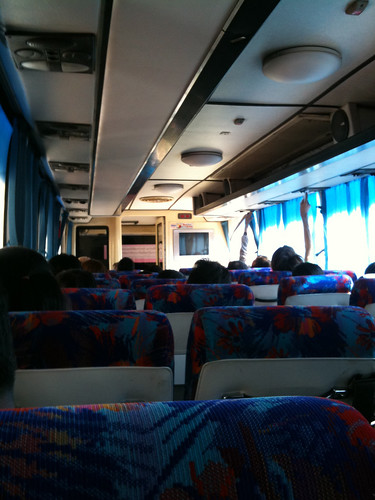 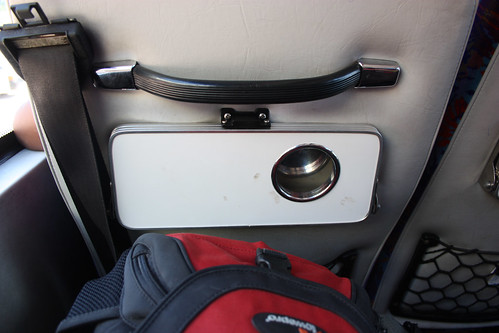 The bus stops at the border as you go through the Laos checkpoint. Then it’s back on, go over the bridge, off and through the Thai border and back on and away. It was quite interesting once we left the border, the mood in the bus seemed lighter. 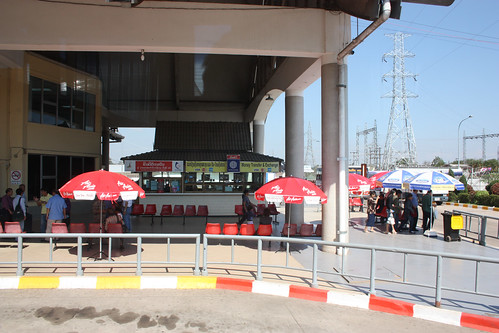 At Udon Thani I got off the bus and walked across the road to my new digs, the pink coloured Silver Reef Hotel. After the sort of dank digs I’d been in the brightness of the place was cheery. Each room has a cartoon character behind the bed and I got a manga one. The room is clean has a soft bed and I don’t think it’s a sex tourist hotel. I like it even though the Top Mansion was much cheaper. 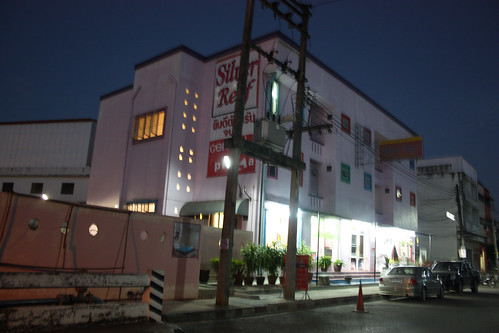 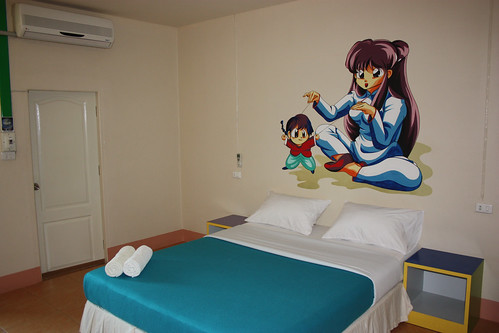 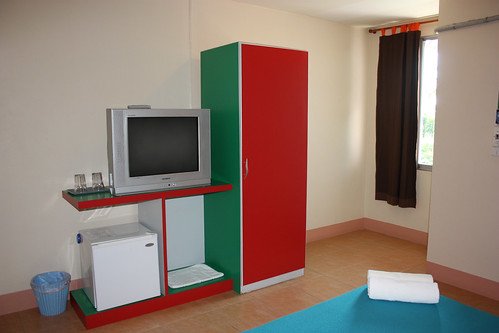 By now I was hungry so mad a quick dart over to the food court in Central Plaza as per Wendy’s suggestion. Got myself a “soup-chicken-rice” for 30 baht was exactly what I had been craving. As I sipped the soup which was essentially flavoured water with chives my dehydrated body said thankyou and my palate said yum to the fried chicken and excellent rice. Thai food courts seem to have a coupon system where you pay the lady, get your coupon then give the coupon to the store. No idea why it’s done like that. I even got an awesome banana flavoured waffle on the way out. 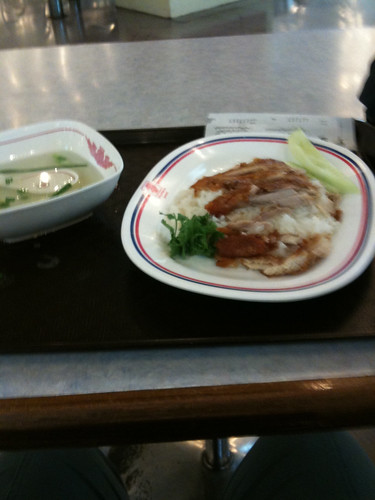 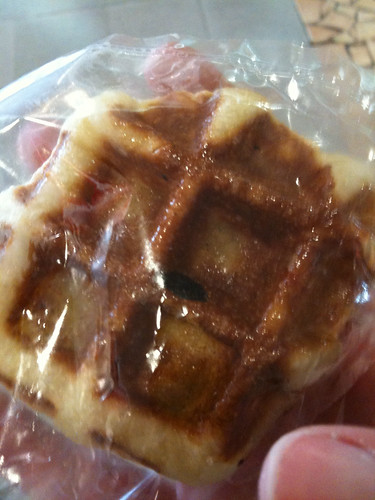 Chilled out for a while at the hotel to stay out of the heat and to make sure the drugs were working (they were) and rewatched Michelle and Romy’s high school reunion.

Out again at four I went for a walk to check out the fountain circle and the clock circle then bought some nibblies again in Central Plaza. Had one final look at the lobster nikes I wanted but decided i didn’t like the glue work on them and they seemed a bit shoddy. So they will just live fondly on in my mind. 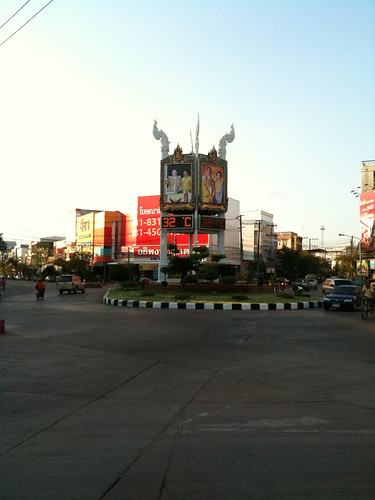 Tomorrow it’s back to the beach at Koh Phanang via Bangkok and Koh Samui, so it will be an early 6am start. Wooo!