Early morning wake ups should be banned on holidays but when u have a plane to catch you don’t get a choice. It was still dark when I checked out of my cartoon hotel and then headed down the road for a tuk tuk motorbike ride. Talked the guy down from 300 to 200 since that was meant to be the price to the airport than rode the chilly quiet streets in the dark.

Was enjoying looking at the mist over the airfield when suddenly we stopped. Am I going to get killed dumped or maimed for my bargaining? No, the tuk tuk had run out of gas. He had just enough to do a u turn to the hut nearby and get a soda bottle of gasoline full then we were off again to the airport. Pleased that I had survived and feeling sorry for him I gave him 20 extra baht.

Of course, the checkin counter wasn’t opened yet due to my obsession with arriving early, but when it opened I was the first to checkin. Killed some time with google reading using the wifi account that came with my phone sim which was useful on the netbook. Had a good window seat but the flight was uneventful. 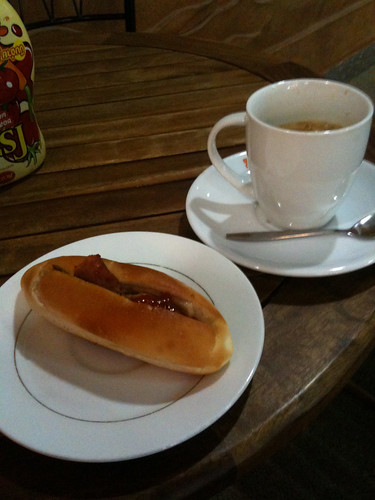 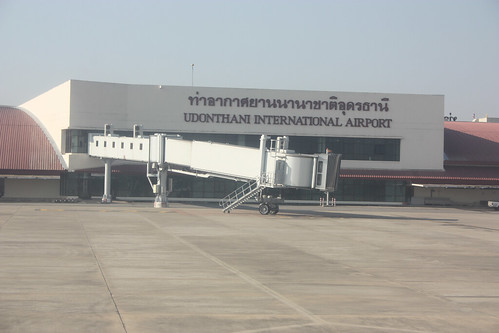 Arriving at the new Bangkok airport was an experience. The design is striking even while you are still in the plane and once you are out it so bright and glassy and clean. Being in a rush to book in for my next flight to Koh Samui, I raced the 50kms to the baggage area only to have to wait 20 mins for the carousel to start turning. Then it turned for another 5 minutes with nothing on it. Eventually my bag came and I headed up to departures. 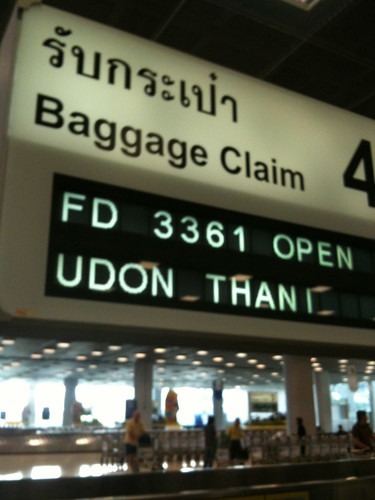 The line up for Bangkok air was long and not separate by destination. Near to the front (after maybe 15 mins) they called for everyone on my flight to come forward. That turned out to be a lot and we all ended up in the two standby lanes. I had passive agressive internal anger at a European family who manouvered their way in front of me – their 6 bags to my one. But of course I said nothing as the husband had been in front of me to start with.

After checking in 5 mins before boarding, I went and bought a boat/bus ticket for the ferry from Koh Samui Airport to Koh Phangan. The lady looked at my boarding pass and signed me up for the 1.30 ferry. I had doubts I wa going to make it but she seemed to think I’d be ok. Racing down the 50kms to my gate starving I passed all food places I was swiped in. Unlike other airports, Bangkok has sort of lounges where they lock you in. They swipe your boarding card as you enter which means no line ups when it comes to getting on the plane. People are swiped at their leisure. Cool idea except you can’t go out and get food. Lucky there was a toilet there though – not that I have any problems now I’ve taken the drugs. 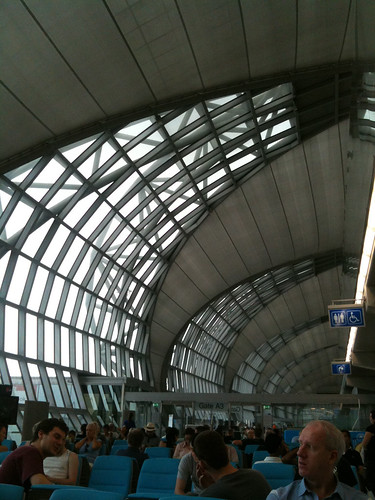 I was pleased to note that on Bangkok airlines (a boutique airline is the slogan they kept pushing) you get food and entertainment. The hostesses were very efficient to feed us all croissant sandwiches and orange juice in the 45 mins of the entire flight. On tv we had worlds funniest home videos that aren’t that funny when it’s silent.

Once off the plane there was no way I was going to make the ferry without leaving my luggage behind. The assistants at the airport told me I would have to tak a taxi to make it so I just asked if I could take a later ferry. They changed my ticket but I had to give them another 50 baht and pay for a taxi. Seemed all kind of dodgy – especially later when I saw vans for the ferry arrive at the port after me, but whatever. Instead I shared the cost of a taxi with an English airforce guy and his Scottish girlfriend from Inverness. He had just come back from Iran and Qatar where he had been for three months. They’d spent a few days in Bangkok and were now going to the full moon party like me in a few days. Holly and Andy were their names. Very cute and lovely couple. 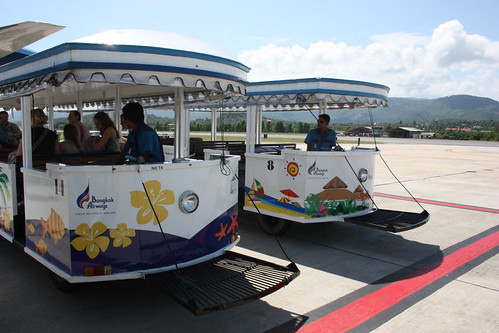 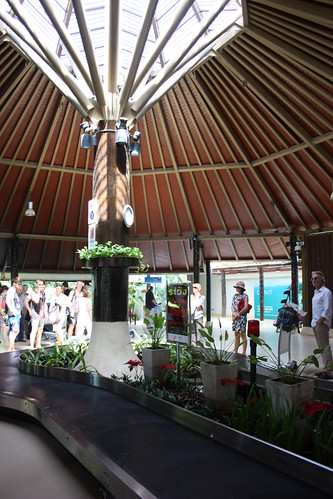 At the ferry port it was empty and the lady said we’d have to wait until 4 to get our tickets. So I spent some time in the cafe across from the water eating green curry and drinking mango tango and pineapple freeze. Once you see the stunning blue water it’s easy to fall in to holiday mode – it’s like it has magic power to set your happy switches to high. I’ve got 4 hours to enjoy it though just sitting here, next ferry doesn’t go until 5.30pm.

The koh samui airport is a complete contrast to the Bangkok one – you’d be forgiven for thinking you have gone to another country. They are huts made from bamboo and surrounded by lovely ponds. Really nice way to ease you in to a trip.

After my taxi ride to the ferry port from the airport (covered in an earlier post) I had to kill 4 hours carrying all my luggage. It’s not hard to do when you have food, Twitter and a beautiful beach to laze on. I thought about the things I’d like to take back with me to australia from Thailand, their brooms (unlikely due to aus customs wood hate) and bum guns. I’d found I missed them when I was in Laos as they seem to give that extra bit of clean. Might buy one in my last week for the downstairs toilet. Takes a bit of getting used to though. 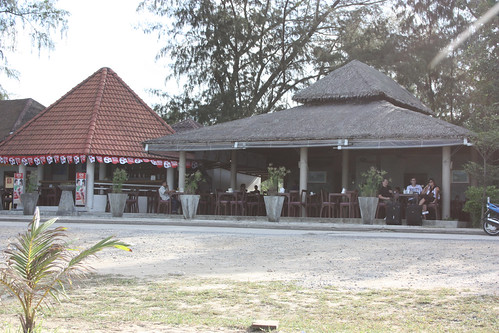 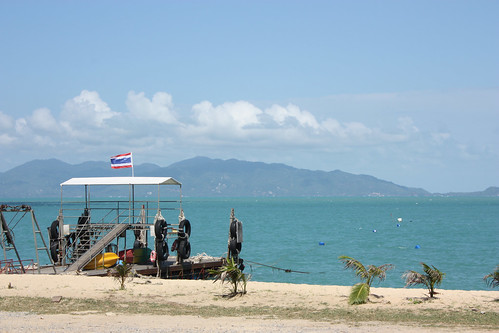 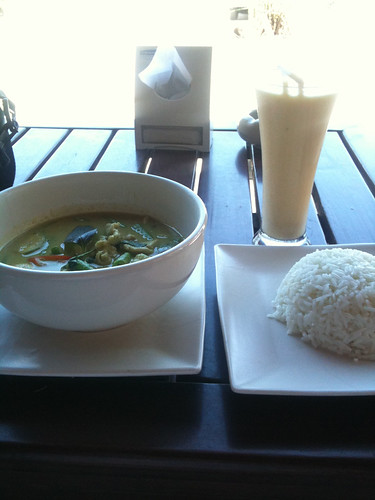 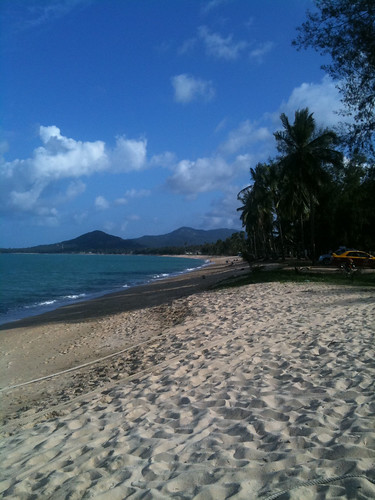 I was heading to Koh Phangan for the full moon party which is on the 31st January. It’s a big dance party on the beach that happens once a month and it’s just one big party. Not being a very good partier I’ll be interested to see how it goes.

The high speed catamaran eventually arrived at 5.30pm and it was the most expensive boat I’d been on so far in Thailand. It even had tvs showing the now requisite funniest home videos. Eventually everyone got sucked in to it and we were all laughing and groaning. 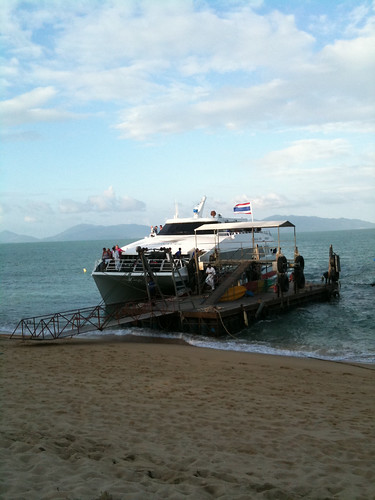 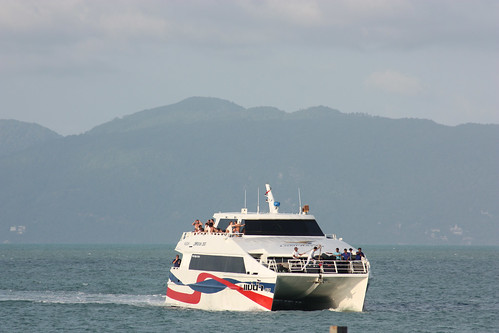 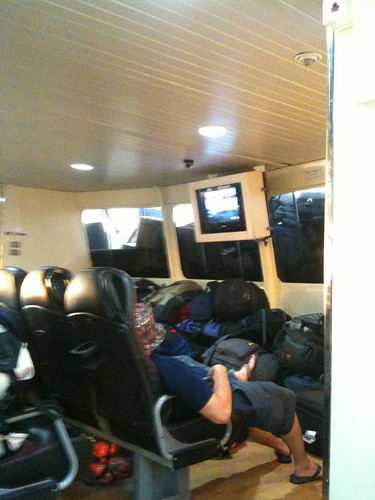 The boat ride was only 20 mins and after getting off I searched for a sign from my hotel with hopes that someone else was getting picked up since I hadn’t booked a ride. Unfortunately I didn’t see one but I had read on the website just before I got on the boat that the meeting place was normally over near the 7-11. Walked down there and only seeing a taxi, I decided to take it. She asked me if I wanted to wait for others and I agreed, so the price was 150 baht.

Sitting in the jumbo taxi I waited and my old taxi friends from Koh Samui jumped in. They were only going down the road, but had lots of luggage so didn’t want to walk. We took off, stopped near the fountain, driver asked for payment then took us down all these back streets. We were starting to worry that he wasn’t taking them to their hotel but to mine which was at the top of the island but he turned right and dropped them at the gate. No driving to the door for them.

Next we returned to where I was picked up, where I was told to get in a different taxi. Saying that I had paid already so I wasn’t being scammed I got in to a taxi with two Aussies. It was funny when i said i was from Brisbane and the guy said they were too – she gave him a really dirty look. Wonder if he wasnt supposed to say anything. We were never going to become best friends anyway – bit too aussie for me. They were going to the same hotel where they dropped the other two off! I was like WTF? While we chatted we were driven round to the other dock where another ferry had landed and I was shuffled in to yet another taxi, this time with about 8 swedes? Finally we had a taxi full of people going to Haad Yao at the top of the island so we set off. Except as we left someones luggage fell off and we had to stop and get it. This of course meant I spent the entire ride fretting that mine would end up in a ditch. This fretting was combined with the fear that the van wouldn’t make it up the hills that seemed to keep popping up. It was kind of exhilirating and utterly frightening. The cement roads were in good condition but the car not so much.

Droppped in front of my hotel I was greeted by the friendly Thong who checked me in and her 5 year old nephew Sami. It was then that a guy popped his head up and told me he’d been at the ferry waiting for me. Damn – I’d missed him! But I guess then I wouldn’t have experienced the taxi shuffle – which is quite economically and environmentally friendly when you think about it.

Feeling frazzled I was instantly pleased by my room. Certainly the nicest now out of all of them, with a safe and LCD tv, but what really took it top class was the pool I could step in to outside my personal deck. Luscious! If I remember correctly I got this for about $40 a night on agoda.com. 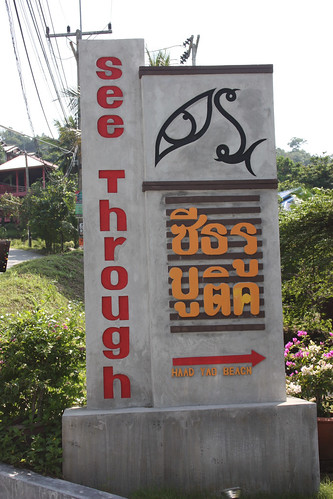 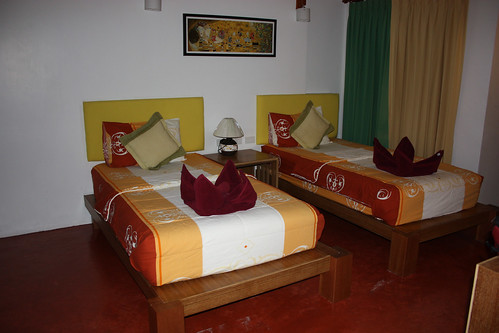 The resort is right on the beach, so I wandered down the back to the restaurant to put my feet in the sand and have a drink. The lights of the hotels were rather pretty and they even set off fireworks! The tide was out so I walked along and investigated all the other places along this long stretch of sand. I found where all the Australians are in Thailand though – my resort! 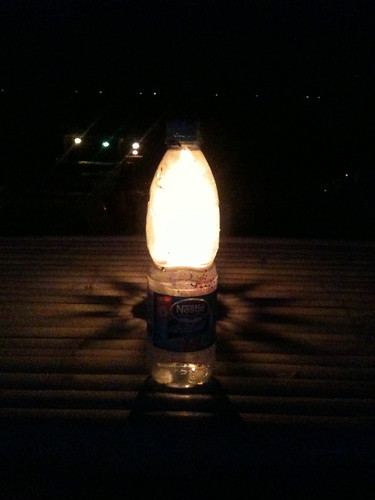 amyob: @djackmanson I’m trying but it’s just so damn hard to put up with.
😉