I’m guessing you don’t want to read about how I spent my day lazing either beside the pool just outside my room or on the beach my resort restaurant backs on to, so I’ll just say that I was pretty lazy. I did venture out though to get my laundry done for 150 baht (50 baht a kilo) and to eat some prawns with baby corn and a coconut drink. 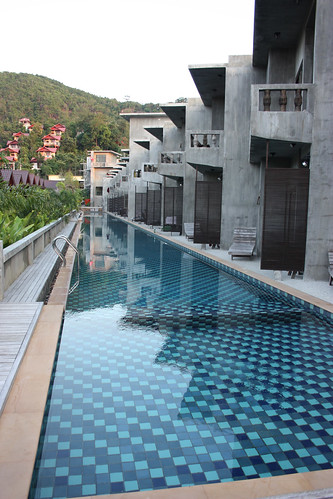 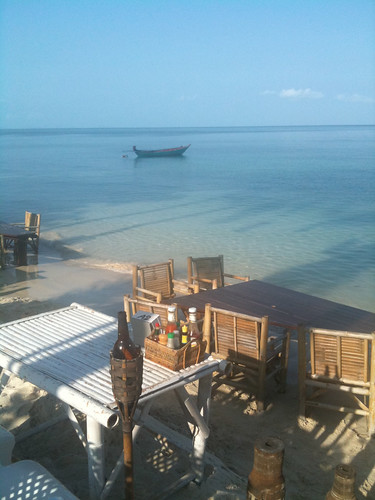 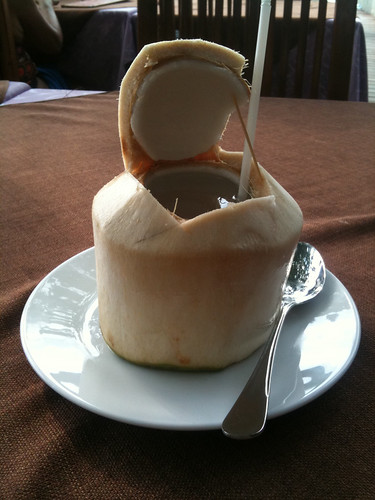 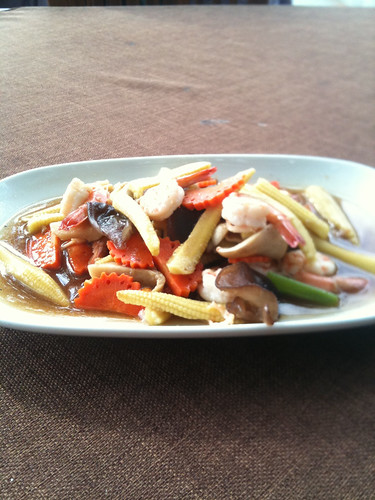 I had been thinking that the full moon party was the 31st Jan, but it turned out to be tonight, so I was kind of limited in my clothing choices. The resort is kind enough to have taxis at 7, 9 and 11pm down to Haad Rin which is where the party is and about 40 minutes drive away. I booked myself on the 9 and then paced myself by relaxing the rest of the day. 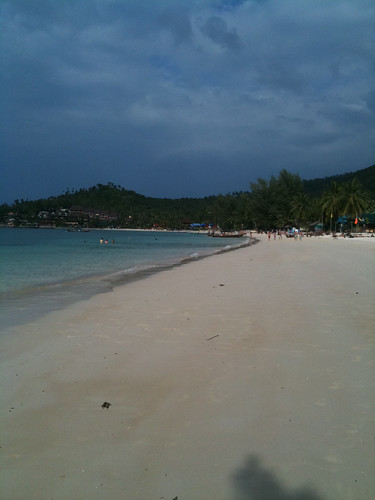 Around 7.30pm a downpour came that was a little insistent and hung around for over an hour. I was starting to wonder if I should still go, but I thought rain would just add to the fun. So I shoved all my money in to a plastic bag and then my pockets and headed out to the taxi. The lady at the hotel gave everyone cards with the hotel details on it so that if we got too pissed we could still make it back.

The rain had thankfully stopped by the time I got in the taxi and as expected it was full. Of course, it was full of Aussies from Melbourne, Adelaide, Darwin and wagga. None of them showed interest in asking me where I was from so I just kept silent. 3 guys and 3 girls who must have met at the resort Just before the taxi left, two big burly guys came out, one with an “I’m the man” t-shirt on and the other introducing himself by talking about special massages in Bangkok with happy endings. They were of course English, off their faces and from Bristol. They immediately started an England is better than Australia rivalry talking about the ashes and other sports they’d beaten us at. The guys were rugby players. Unfortunately my Aussie companions were utterly lame at any sort of comeback while I sat there silent but frustrated. 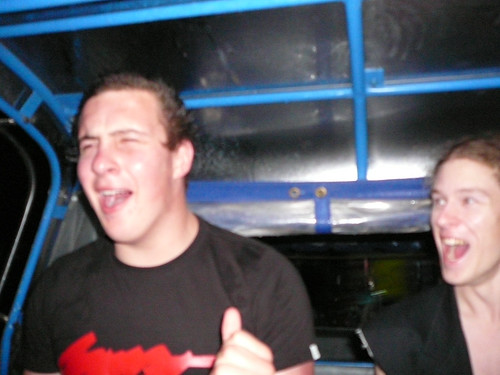 Our taxi took off up and down the hilly wet roads which were rather dicey. There were even a couple of parts where the road was a little flooded which made me wonde what it would be like in the wet season. Indeed, as we were going up a hill round a corner we saw a guy come off his scooter on the downhill bend and slide a few metres. He got up though but I suspect he may have a nasty rash. 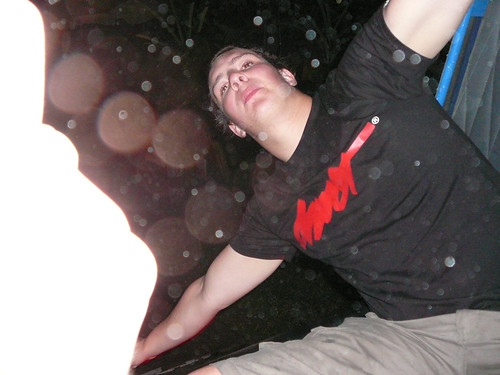 Meanwhile, our taxi had turned in to the singing bus, where the english guys would sing praise England songs and the Aussies would come back with vegemite tunes or waltzing Matilda. The English guys had a much better repertoire than the 20 year old Aussies who ran out of comebacks by the third song. I sat there miserable that I was stuck for 40 mins with some rugby thugs and bogans. In the Aussie guys defense though they were a little appalled by the rugby guys derogatory ping pong comments. Eventually though I was coerced in to singing Aussie songs and Oasis’s wonderwall when my Brisbane hometown was revealed. 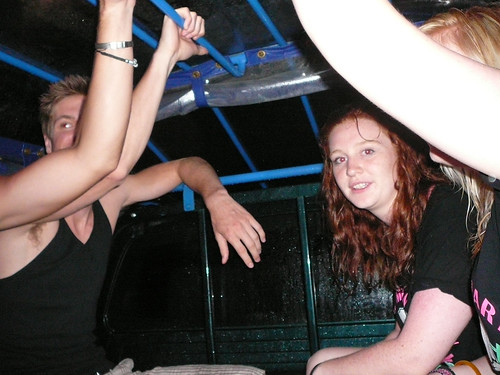 I had fun observing the young melbournian guy, who was so familar with his tied back long black hair, white body, dollhouse references and ability to quote complete scenes from Snatch to impress the Bristol boys. He was clearly a work in progress (being so young) and I think he was with the wrong crowd and didn’t quite fit in. He was clearly intelligent and reminded me of many boys I went to school or Tafe with. He was probably striking out left right and centre but he would be cool when he grew in to it. 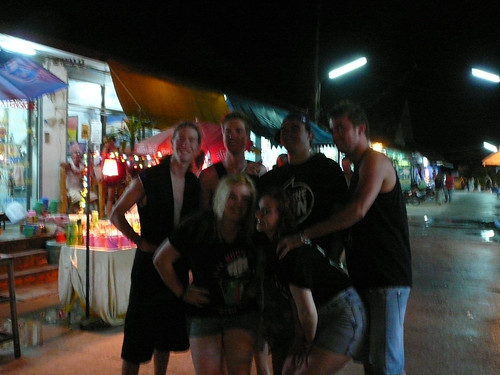 As soon as the taxi stopped I couldn’t get away quick enough while the rugby boys joined forces with the Aussies. Buckets of whisky, red bull and coke are for sale before you even get to the party and you can even get yourself painted in neon. The party happens once a month whenever there is a full moon (but there are half moon ones too). It costs 100 baht ($3.30 aud) to get in and you get a high quality commemerative wrist band with it. 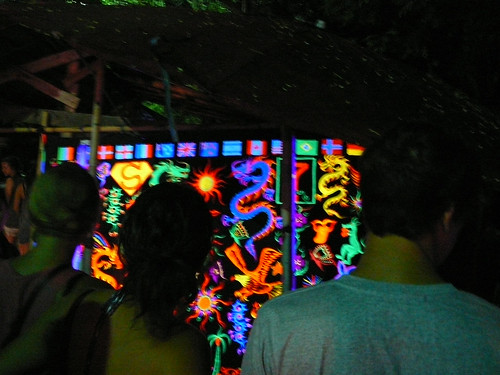 Once you make your way to the beach you are overwhelmed by the neon lights, loud dance music and fireworks. On a beach the size of maybe Noosa there are 8 clubs/speaker systems all playing different music. No rules about glass here, so you can buy a bottle of alcopops no problem. That’s if you don’t want to buy from the 50 or so bucket stalls. To separate each from the other they have come up with different slogans to make you come back to them. Signs say “cheapest fucking bucket” “good sex bucket” “good fucking pussy bucket” “love you long time bucket” or simply use names for the stall like Rob or Joe. 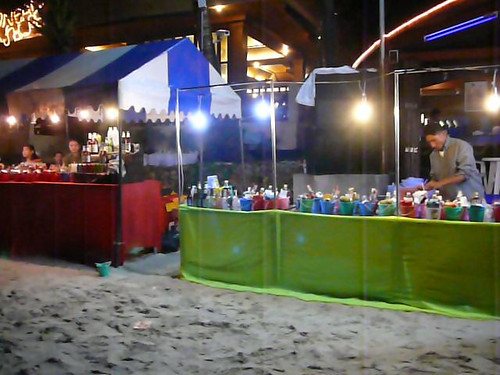 Each club has a bit of a gimmick or different dance style, like some had firetwirlers and another had a firey skipping rope where drunk people jumped and got burned. I really do love the fact that Thailand is a little bit dangerous – not that I’d want to live that way. 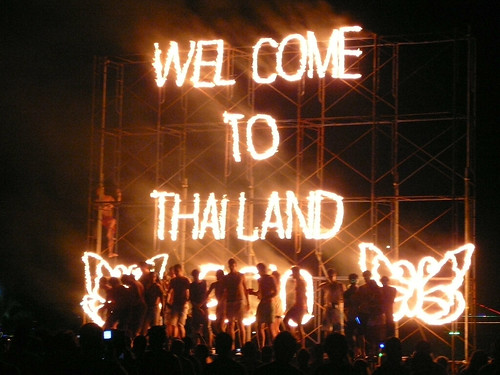 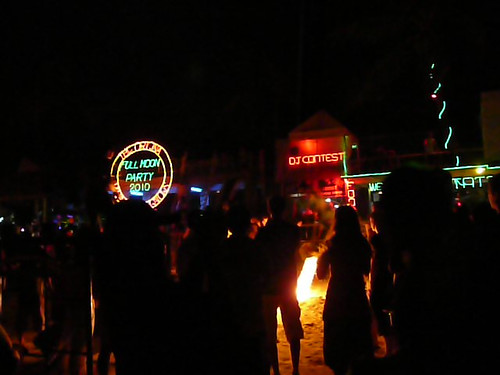 Not having eaten since 3pm I bought myself a flat piece of chicken shoved between two sticks and then for dessert the most incredible fluffiest jam donut. After my phi phi bucket throwing up episode my stomach warned me to stay away from the buckets so I just had a lime Bacardi breezer. I wandered up and down the beach watching the people experience the spectacle. 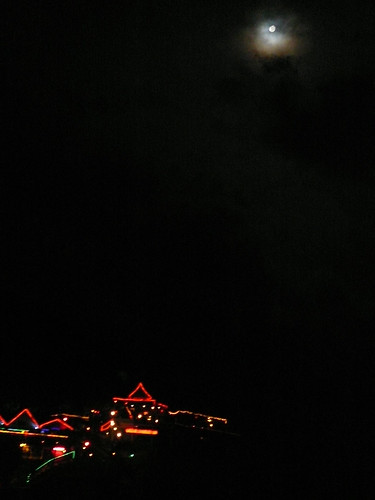 Being in a bad mood and not wanting to have anything to alter my mood due to being alone I became essentially the party observer. I sat there resenting people and wondering if they were really having fun or if they just felt like they had to have fun. Of course I knew people were having fun, but I wondered what the percentage was. There was the usual people getting so trashed that they would pass out and say they got so trashed at the full moon party. I saw my first vomiters at 10.30pm and I saw men pissing in the sea all the time. I wandered with hatred for everyone and self hatred for my inability to make it easy like it seemed for everyone else. All this bad attitude is not because the party isn’t any good because I could appreciate that it was an awesome scene, it’s just that I don’t think it’s fun by yourself if you are an arrogant grumpy asshole who wasn’t even trying. 🙂 Maybe I just needed Michael my Brisbane dance friend to be there to help me loosen up. I think he would really really enjoy it.

After about 2.5 hours I had enough of my resentment at people having a better time than me so I went to find a way home. To get back to the hotel we were left to our own devices (my hotel didn’t have a return taxi but others did) but I managed to find a taxi that would take me if I was willing to wait. While waiting I made friends with an English guy who had had 3 buckets but was going home cause he had been drinking every night for two weeks and had had enough. Other than the fact that he offered to spend the night with me at my hotel which I cheerily declined he was actually a cool guy. One of those English sensitive blokes who care about elephants and cows and stuff. Also on the taxi was a Swiss girl who was also going to Haad Yao like me. I was pleased that I wouldn’t be forced to take the long journey all the way there solo. The taxi guy found about 6 Asians all going to the same place near the ferry pier so we were able to leave.

The taxi ride was the most fun I’d had all day as the English guy, Swiss girl and I chatted about our travels. England was travelling for 6 months (instead of buying a car) with 6 mates, Swiss was doing a month and had been on tours and was only just going solo. Travel does seem to be the standard topic for everyone who meets overseas, so if anyone has any other openings I can use as a discussion piece feel free to let me know.

After dropping everyone off and me leaving the swis girl in the taxi to go to her place I headed to my room. The hotel was dark but no silent by any means. The area next to my resort was full of the sounds of frogs so I paused to record the sound for Pauline then headed off to sleep. As expected, my party attendance was a non event but I’m maybe after 34 years beginning to understand that I’m not really a party raver and that I should accept that. I do like to watch parties though and in that respect I was very successful.