Today was meant to be the day where I would head all the way out to Citi Field (which was once known as Shea Stadium) to watch the Mets play Major League Baseball. I know nothing really about the sport other than A-Rod seems to be a dick and I’ve picked up a few things from some episodes of the Simpsons. All I wanted to do basically was to drink beer and eat a hot dog. Meanwhile, Fiona, Pauline and Sue planned to visit the Museum of Natural History near Central Park since their interest was minimal. Mum was going to hang out with me. Unfortunately though, when I went to purchase the tickets online using my iphone, I learnt that the only ones left were over $100 USD. Thinking that was way too much for my humble intentions, mum and I decided to make other plans since the others had left.

We decided to walk down 31st street and turn right in to 5th Avenue and just look at stuff, but being a Sunday and still early in the morning at 10am not much was going on. Window shopping at the cool retro store Cheap Jacks, perfume shopping in the millions of perfume stores, discovering a pearl pig and generally just walking was our first task. Oh, and trying to figure out what the purpose is of the wooden barrels on the roofs of apartment buildings! 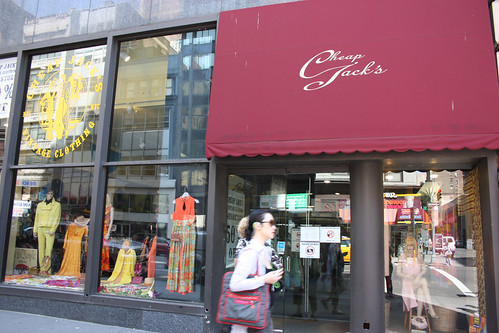 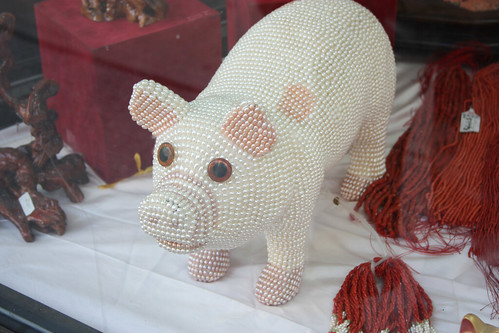 What are these wooden barrels for?: 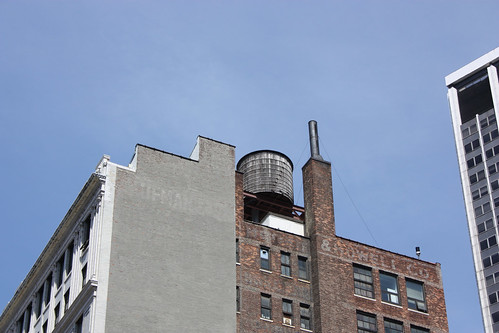 Eventually we ended up in Madison Square Park where I saw the original Shake Shack which is the chain from where we had bought burgers a few days before. The line up was huge – too huge to get an encore black and white shake, so after I took a few photos of the shack and the Flatiron building next door, we hopped a train to go to the Stand for lunch. 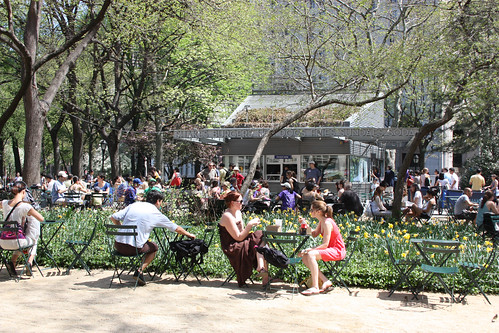 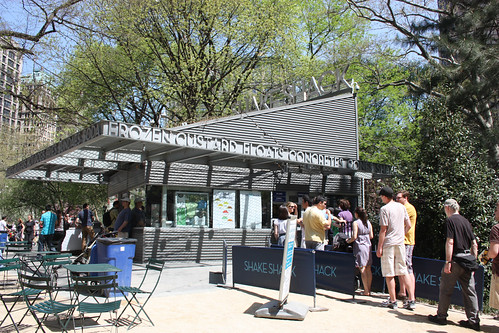 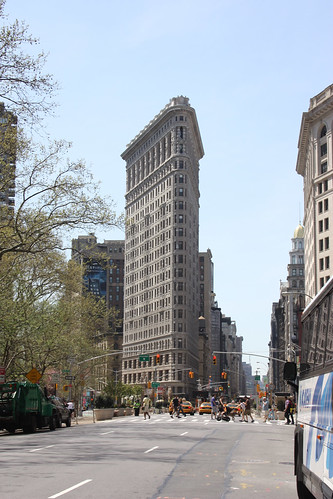 The Stand was yet another burger joint I had learnt about online, but my intention for visiting here was primarily for the toasted marshmallow milkshake. The store is restaurant like in it’s seating and sales – no dodgy mcdonalds type service here. The design of the place was really cool with the booth wallpapers and the toilet was clean and lux. It was relatively quiet inside the place (I guess all NYers were having brunch or something) so service was quick and great. The marshmallow shake was everything I imagined – it tastes exactly how it was named. I told mum to get the pineapple-lime soda which is made entirely inhouse and it was summery beautiful freshness, a really really great drink. We shared a burger which we both really enjoyed (Mum may have only had a bite though). She thought it was better than Shake Shack, I was undecided.

The cool fake booths at The Stand: 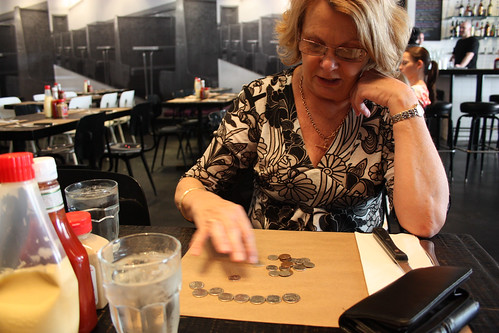 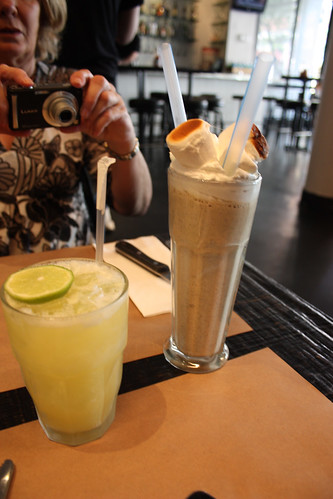 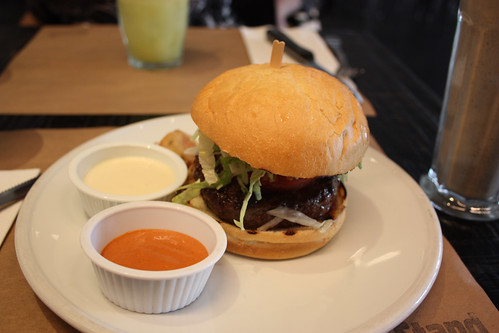 When arriving at the metro we had seen signs about Filene’s Basement which was another brand name discount store which Mum exhibited interest in. On the walk back to the metro we stopped in there to do some shopping but all Mum managed to buy was some socks and maybe a shirt for my niece. I found some polk dot gum boots which amused me no end but for some reason I didn’t buy them?? 😛 Got a good photo of Union Square though.

Do the amount of polka dot gumboots mean it is popular or unpopular: 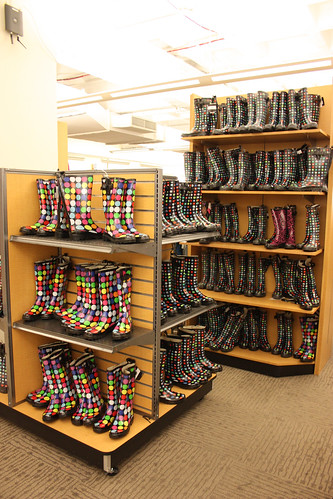 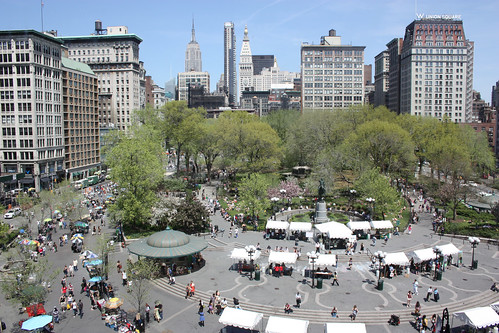 Downstairs there was another Whole Foods store and I couldn’t resist the urge to introduce Mum to my new favourite grocery store. It was a complete madhouse in there, so many people lined up to purchase items that neither of us could be bothered to buy anything because the lineup was so long. I did enjoy seeing an escalator purely for the trolley – that was so cool. I guess a travelator would take up too much floor space so this was a better alternative. No children can ride in the trolley up the escalator though! LOL. 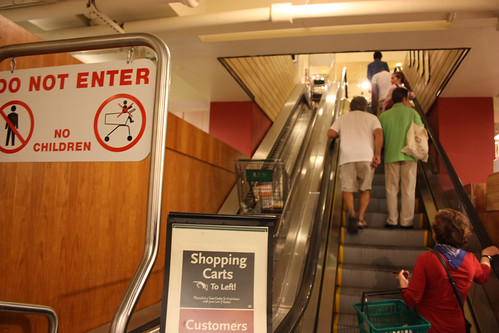 Back at the hotel we met up again with the others and decided to go over to Brooklyn. I chose Dumbo (Down Under the Manhattan Bridge Overpass) as the place to visit, mainly because the Brooklyn Bridge was there and would make for a cool view. I knew Dumbo was an up and coming area but on a sunday it wasn’t the vibrant bustling small stores I imagined it to be after getting off at High Street but it did have a Neighbourhoodies store where I had long ago purchased a custom made jumper online (but it was closed). Luckily the Manhattan Bridge, Brooklyn Bridge Park and the Brooklyn Bridge itself salvaged the journey. I got a great photo of an old white rolls royce drive past – probably my favourite picture of the whole trip primarily because I had seconds to take it as it went past and it was an action shot.

Rolls on the run: 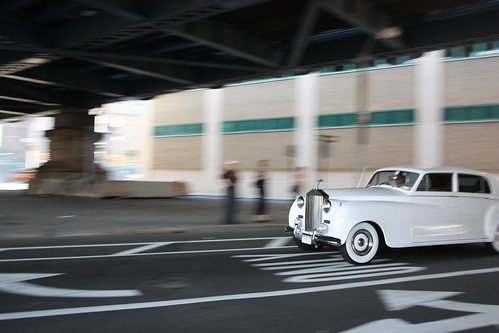 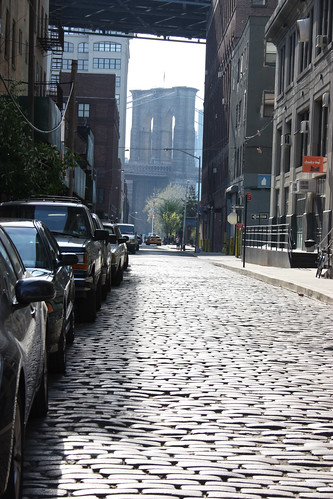 Down at the Brooklyn Bridge Park we saw a new Bentley being loaded in to a truck and people sunning themselves on the grass. We took it slow and sat for awhile just enjoying the rays and people watching. I got loads of pictures of the two bridges as well as Manhattan. It’s a lovely place to hang out on a Sunday, watch the boats go by, watch the cars go by, watch the city go by. 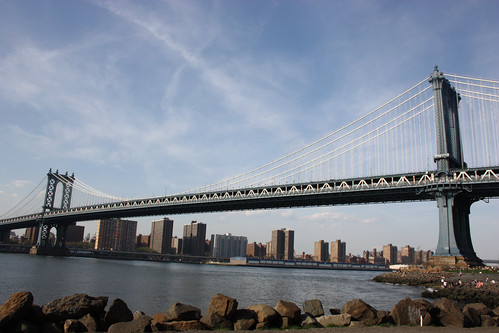 Sue, Lynne and Pauline at the Brooklyn Bridge: 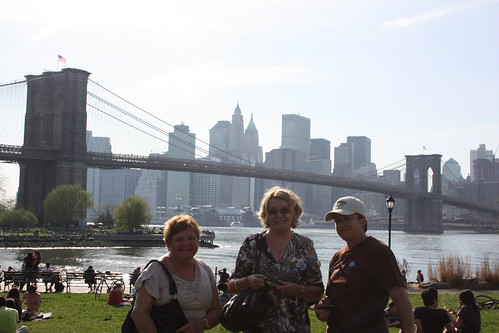 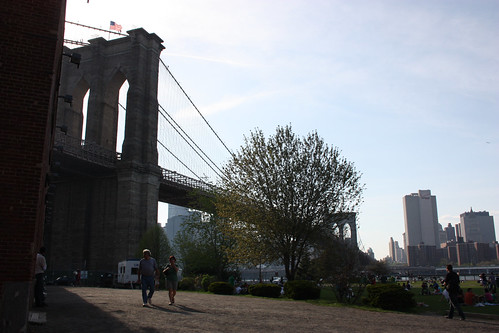 For dinner we walked over to Grimaldi’s Pizzeria which meant we got to walk under the Brooklyn Bridge. I’d seen it on tv as a good place for New York Pizza and the line up outside let me know other people agreed. We were probably out there for about 15 minutes before we got inside – I’m glad cause any longer and the sun may have melted us. Inside we sat down near the kitchen, got confused about the menu, ordered a pizza with about 6 extra toppings and started drinking the gorgeous Old Brooklyn Orange soda drink Auntie Sue and I ordered. After a while I remembered we were really stupid because the best pizzas should only have about 3 toppings at most – which is why the guy looked at us like we were idiots when we ordered. 🙂 We had a long time to think about our mistake though since we arrived just in time for them to restoke the pizza oven. They do this between 4-6pm everyday which means that no pizzas get made for maybe half an hour while they clean up their stations and relight the fire. We weren’t brave enough to change our order though.

The lineup at Grimaldi’s Pizzeria: 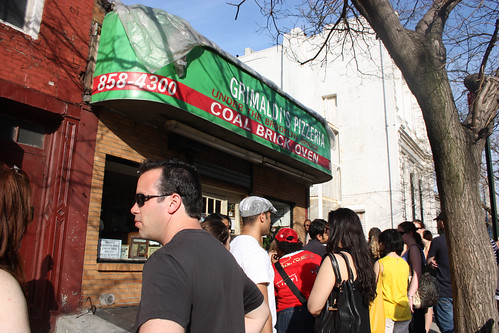 The decor in Grimaldi’s pizza is classic italian red and white checkers with booths down the side. This isn’t an intimate setting because you get seated with others at the table (if you are in the middle section) but you don’t care because you are just happy to make it inside the shop. The walls are covered with photos of celebrities and a Frank Sinatra shrine. The toilets are past the kitchen and if it’s busy the lineup lets you stand there and watch as their making your dinner. We were starving by the time our pizza arrived and it was fantastic. I’d order less toppings next time but it was worth the wait. I may have liked Zio’s pizza base in Philadelphia more, but this pizza beat it for overall yumness. The others concurred with me.

The kitchen at Grimaldi’s: 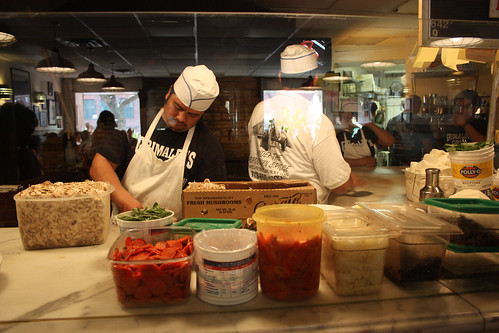 Our over toppinged pizza but still luscious: 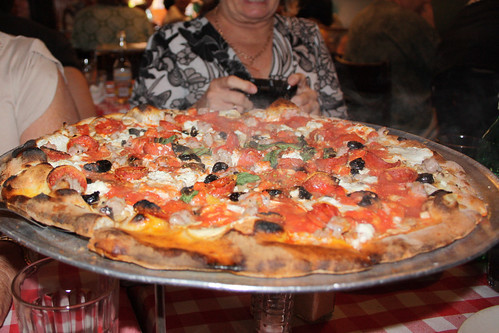 After dinner I lead us up the garden path to a metro station we were never going to get to, mainly because there was a freeway in the way that we wouldn’t be able to walk to. We could have done without that extra walk and ended up heading over to the York Street station to go back to the city. At York Street we watched a black homeless guy get followed by two police officers to ensure that he didn’t harass any of the tourists or hipsters in the area. It was a short insight in to why New York is now the clean streets it purports to be and no longer the dingy streets of the 70s. I was in the two mindsets of “geez I don’t like how they are harassing him” as well as the “thank god they are there and he isn’t harassing me”. Kind of conflicting. I chose to deal with it by catching a train far away back to our hotel where at 8pm the sun still hadn’t set. Another long day where we just crashed in to bed. 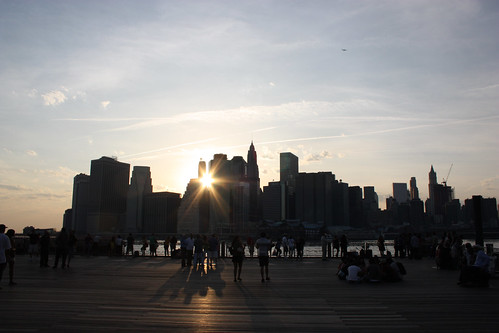 Riding the metro, yet again: 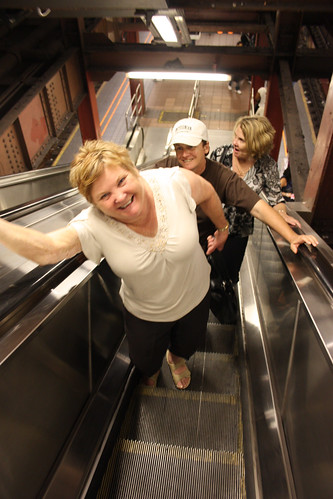 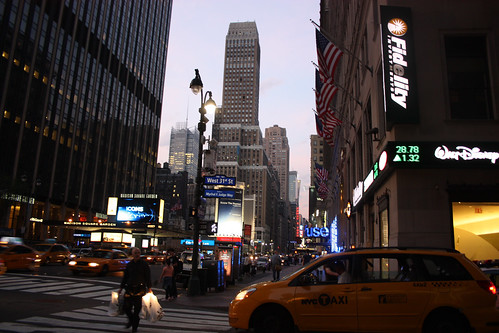 Feet have a hangover from the last few days. Must force them to move today. I might sit down and watch a baseball game later.
Cheap tickets to ball gamehave sold out. Not going to pay $100 a ticket so plans have changed.
Toasted marshmellow shake from the stand is to die for.  http://twitpic.com/41lw6
Afternoon collapse in hotel room bed. Our journeys out are getting shorter and shorter.
Just had some woderful doowop tune on the train by some buskers. They were too good to not give them money and they make most people smile.
Not all of the time but some of the time, I feel like I am playing GTA liberty city as I walk around NYC. Think the sounds are the catalyst.
A hot sunny day in Brooklyn bridge park.  http://twitpic.com/429ss
Pizza at Grimaldi’s for dinner. We may have put too many toppings on but it was still good. First NY pizza.
http://twitpic.com/42h21