Today was more of an act like a local day even though we snuck some sightseeing in. First up we hit Greenwich Village and Washington Square Park. The park is well known in movie circles for the arch where Sally dropped off Harry in When Sally met Harry, the place where they all gathered in the movie Kids and for the chess playing guys. Unfortunately they were doing a load of construction work in the area so it wasn’t looking it’s best – apparently they are moving the fountain to be more aligned with the arch. They also have some “runs for large dogs” and “runs for small dogs” which we in Brisbane know as “off-leash areas”. 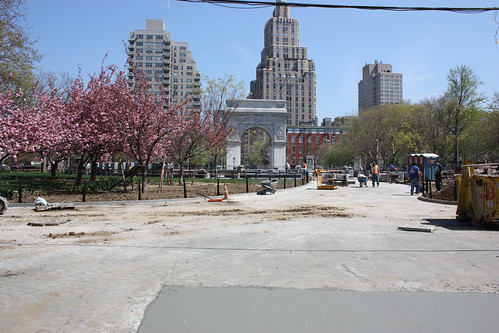 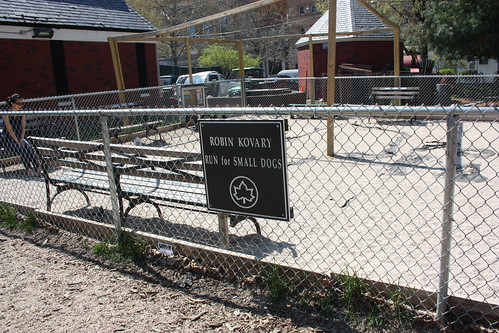 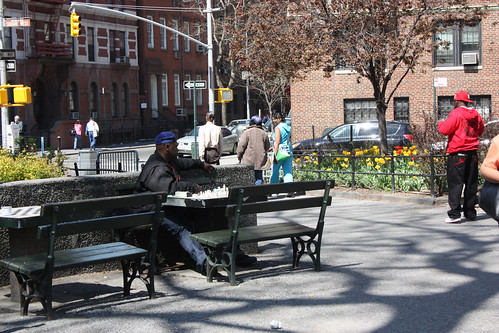 We then cut a U-Turn down Bleecker Street heading towards the ultimate goal of Magnolia Bakery. Bleecker street is a cute street with lots of small stores and trees in what is mainly a residential area. First we checked out the Pure Dark chocolate store where I spent way too much and a watched a bus ruin a BMW when it tried to turn a corner in a really small street. It was fun to watch all the people frantically write down the number plate of the bus to leave for the driver of the BMW. I’m sure their day turned up shit.

BMW scratched to shit by a bus driver: 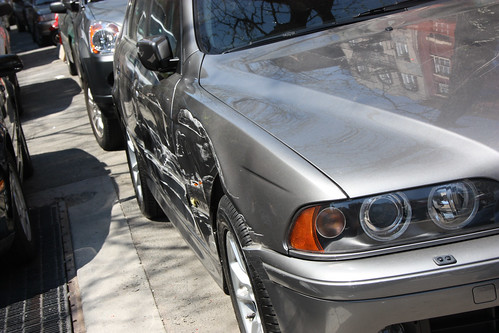 At Magnolia Bakery we got to live out Fiona’s Sex in the City cupcake dreams while I got to live out just my cupcake dreams. Walking in to the store for the first time it is a madhouse of confusion. There are tonnes of people squished in to a small store and for a while it seems like anarchy until the yelled directions of the staff click in your head. If you want to look like you’ve been there before, this is the drill. Walk in, turn left immediately. Grab a box and fill it with all the cupcakes your heart desires. Go back past the door navigating around the newbies who’ve just walked in and have a stunned look on their face and get in to line behind 20 others. Have your cash ready, pay for your cupcakes and walk out with the goods. If you’ve got nowhere to go to, across the street there is a park where you can happily munch on your little cup of sunshine with glee. Because these cupcakes are fanfuckingtastic. I had one and went immediately back in to get more for later. We had to share the park with the women on the Sex in the City tour who were riding a limo around New York. Sort of looked like fun. 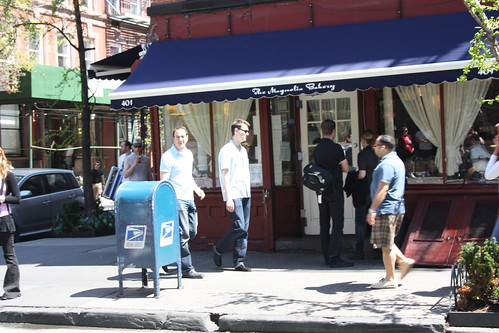 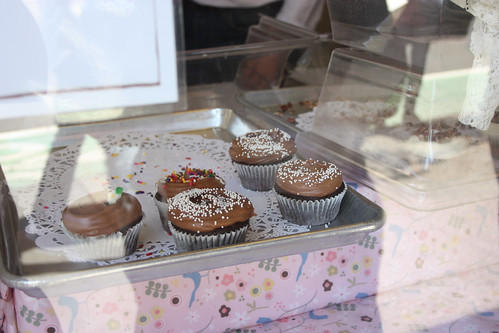 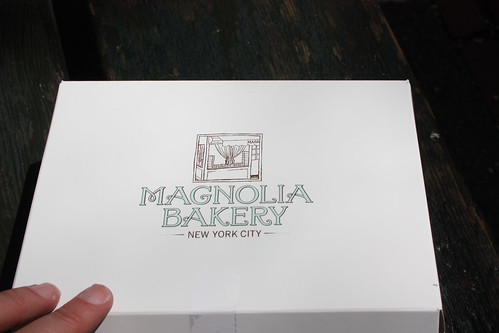 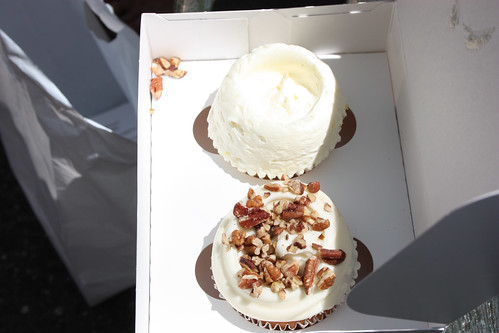 After wandering past some of the lovely houses in Greenwich Village we got back on the metro and headed over to Canal Street for some purse shopping. Canal Street is essentially the cheap chinese ripoff street in New York and reminded me a fair bit of Hong Kong. After the peace and civilised shopping of Bleecker Street it was a hot bustling madhouse of people offering bags, shirts and junk. Pauline and I weren’t really in to it but Auntie Sue was after a bag for Joan so they went hard at it for about 30 mins. We all agreed to meet after 30 mins so Pauline and I basically just went and found some shade and watched people because it was stinking hot. 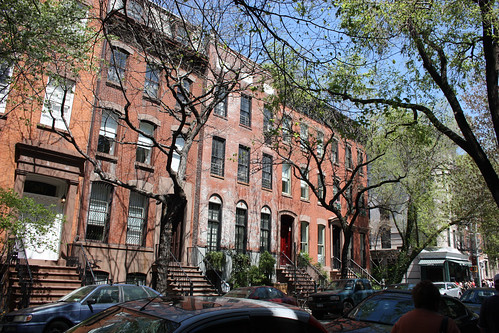 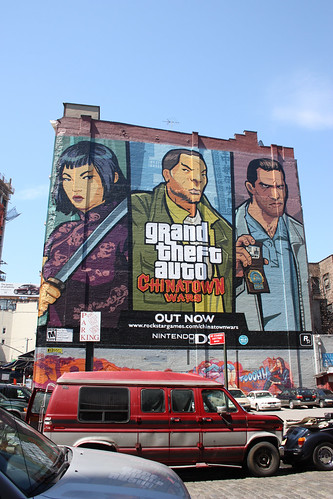 When we all met up again we headed over on the metro to Century 21 to buy clothes that we had seen a few days earlier. I bought some Ben Sherman shirts and a Ralph Lauren jumper for not an astoundingly cheap price but not too bad. Sue and Mum had gotten bored there quickly and instead went back to St Paul’s church to pay their respects in the September 11 memorial inside. 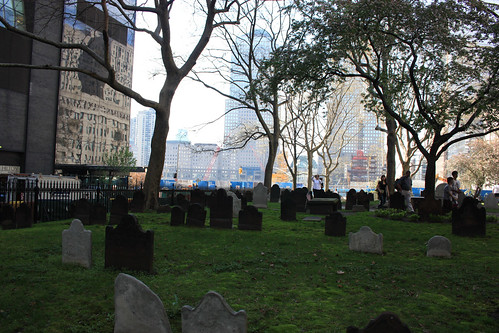 At this point the others decided to go back to the hotel so I kindly unloaded my bags of clothes and cupcakes on to my mother and Pauline and I took off for the east village. I had a list of sneaker stores I had to see but it looked my list was a bit out of date. Suspect a lot of the stores had shut down because of the financial crisis and the ones that were open were really disappointing in their selection. I guess I was a little bit pleased to note that our sneaker stores in Brisbane are as good if not better than the ones in New York. We walked past where CBGB‘s used to be and where I can only imagine all the hijinks of punk and rock occurred because there was nothing left to indicate it’s past history.

Dave’s Quality Meat, one of the few good sneaker stores I visited: 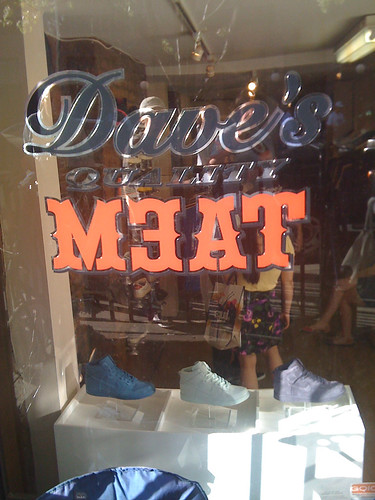 Street in the East Village: 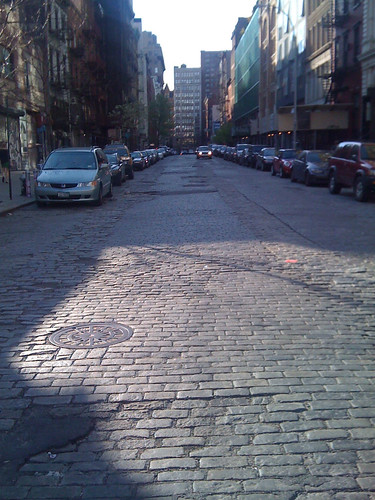 For dinner we grabbed some pre-made food from Whole Foods where I got to try some food I’d never had before. I swear I’d go bankrupt if I lived near a whole foods. It gave us enough energy to make it back to the hotel where we passed out for a few hours. Mum was still recovering from her sore feet and toe that had gotten worse each day. The rest of us decided to go to the Empire State Building around 8pm, thinking it wouldn’t be too busy. On the walk over we did a little bit of souvenir shopping and then joined the queues to get to the top of the tower. At first you think the wait won’t be long, because the queue at the bottom isn’t that big. Then you get in to the elevator to something like the 78th floor where the line goes around the entire building. It is a huge drag and it’s hot and it sucks and you complain but 2 hours later when you get to the top it’s all worth it. Breathtaking views of the city, beautiful art deco in the building and dodging of other people to get the photos you want. It was one of the view things I experienced in New York that was just like my movie imagination had created. From the iron bars that protected us from falling off to the lights at the top it was all there. Although tired, it was completely worth the effort. 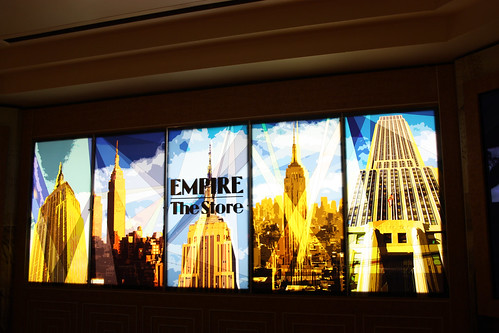 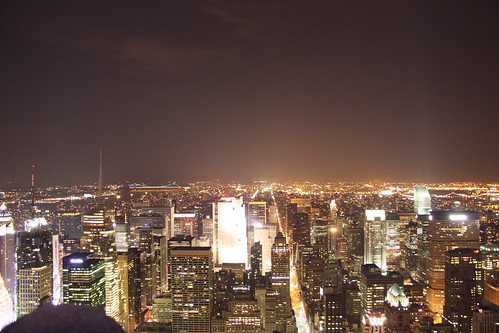 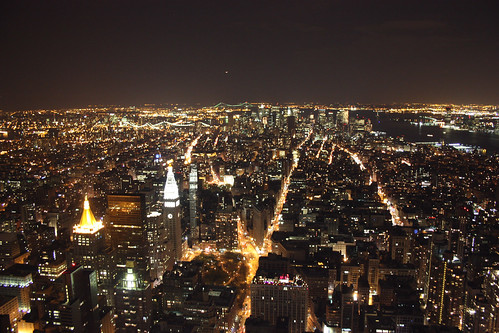 Would have gone to the dawn service at battery park if I wasn’t so exhausted.
Just had a cupcake from the magnolia bakery. Omfg. Stunning. I was swooning.  http://twitpic.com/3yxkx
Wow. Chinatown canal st is a completely different vibe to Greenwich village. Manic and mad!
A moving tribute to world trade centre is in trinity church. It’s really emotional. The church is at the base of where the towers were.
Dinner at whole foods. I want to take this store home with me   http://twitpic.com/3zn71
My sneaker shopping afternoon was a failure. Most of the stores were closed. This was the best store I saw today.  http://twitpic.com/3zylb
A lot of hippy looking people at Madison square garden. Are the dead in town? Why do they hold up 1 finger?
@antiparticle maybe left?
@iusebiro it used to be a butchers I think. 😉
About to go up the empire state building.
On the 80th floor of the empire state building now. Still in a line to get to the top.
The picture doesn’t show u how amazing it was but the view was awe inspiring.  http://twitpic.com/40gwk
@j3thr0 yeah 10pm looks the time to go. No line when we were leaving.
My feet have waved a white flag. My day is so over. Not even happy feet can help me now.