While we were having sweet dreams disrupted by the fire brigade next door driving past with their sirens screaming, Auntie Sue was going through her own personal hell. She had tried to adjust the window and curtains to cool the room down but somehow ended up with the pelmet hitting her on the head. And not one of those soft rods or something – it was the big ass heavy wooden box kind. Fiona came to her rescue and called down for some ice from the hotel but they didn’t seem to helpful apart from offering her paramedics which Auntie Sue declined. They weren’t too impressed from the hotel’s response to her injury and she ended up with a little concussion and a headache that lasted that night and most of the next day. In our room Mum, Pauline and I were oblivious to all the drama and only found out the next morning and even then Auntie Sue didn’t really give us an idea of how badly she’d been hurt.

The plan was to visit Central Park so we hopped on the metro to 82nd street. This was my first foray in to a truly residential area of New York and I was shocked to see the “No Honking” signs in the area. Our sleeping patterns could have benefited from being in this area without fire engines constantly leaving the station at night. There were a lot of people walking their dogs and many people were cleaning the sidewalks. I thought this was interesting since I had just learned the day before that each building was responsible for cleaning the sidewalk directly in front of their building. I know that makes sense at home where we have to mow the lawn between the fence and the street but I’ve never thought about how that works in the city. 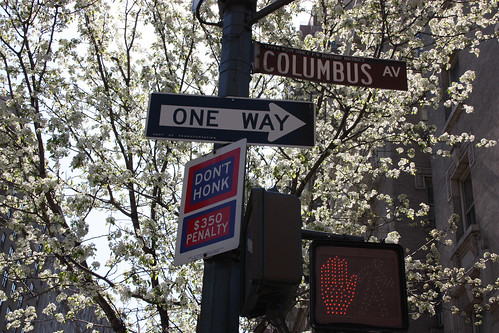 At the park our introduction to nature was a cute little squirrel that posed long enough for even Auntie Sue to get a picture. We wandered up to check out the Jacqueline Onassis Reservoir and instantly fell in love with Central Park. How could we not, a beautiful summer day with a blue sky and people running around the reservoir abusing tourists for standing on the running track. 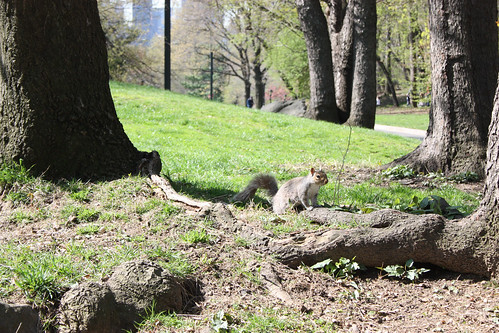 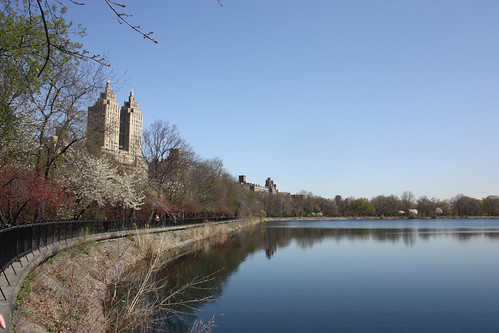 Heading downtown we walked past the Grand Lawn where I’ve never seen so many baseball fields. There were a group of mothers running around the outside of the line pushing prams. But like the highly motivated mothers of my new york imagination they didn’t waste their time just pushing the prams they used it to also do aerobic exercise at the same time. It was boot camp for mothers with prams.

Baseball fields on the Grand Lawn: 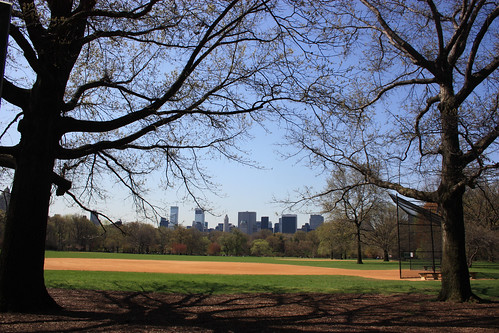 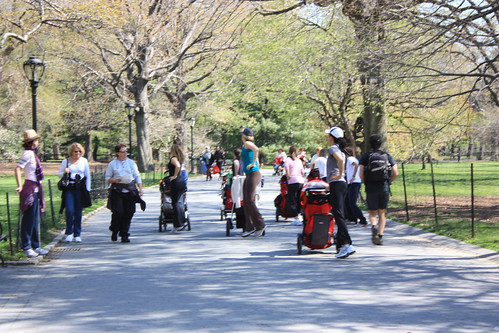 At Turtle Pond I had fun with the ducks but didn’t see any turtles. It wasn’t until we walked up to Belvedere Castle where we got a top down view of the pond and I saw all the turtles sunning themselves on rocks that I believed that it really was a turtle pond. In the castle we were able to go to the top for free and gaze down on the park. Each view of the park made it even more awesome and I thought how lucky the New Yorkers were to have such a large place to play right in the middle of their city. 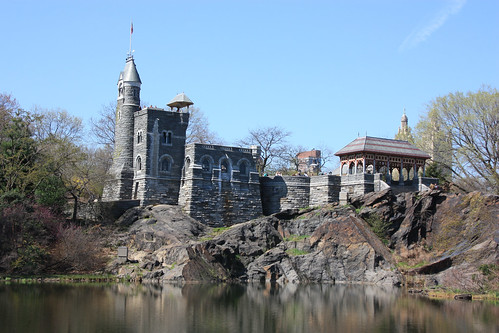 Turtles sunning themselves in Turtle Pond: 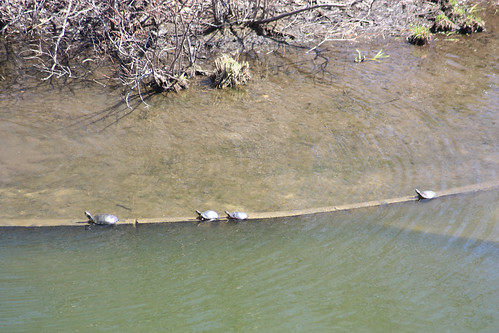 We wandered through the ramble which is more bushy and less managed than the rest of the park and a place where I’m guessing lots of nightime liasons have occurred due to the privacy it offers. It’s also apparently a great place for birdwatching and we later encountered many birdwatchers in their natural habitat.

A waterfall in the Ramble: 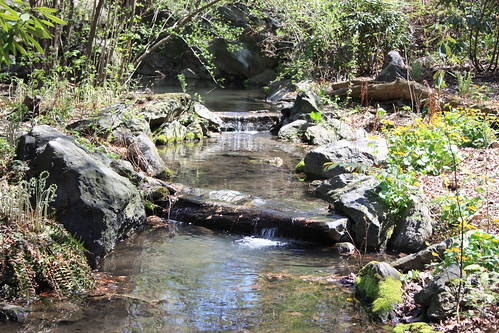 At the Boathouse Cafe we stopped for morning tea and had some coffee soaking up the suns rays while people watching. Afterwards we we visited the Robert Louis Stevensen statue and Alice in Wonderland. Near the conservatory water there was a guy with a telescope directed towards a peregrine nest far away on one of the buildings. It was free to look but he appreciated any tips you might want to leave him. Pauline had a look but not much was going on in the nest, they must have been telescope shy. 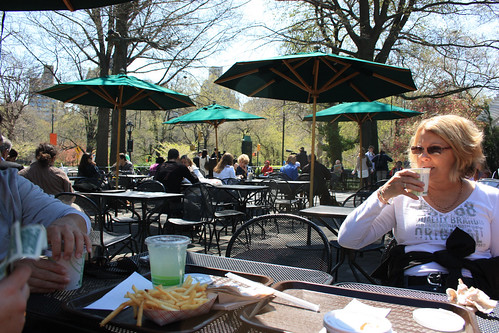 The Boathouse cafe and restaurant: 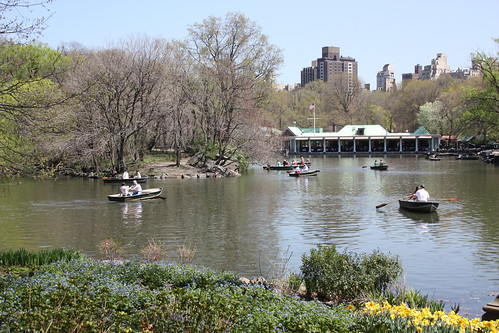 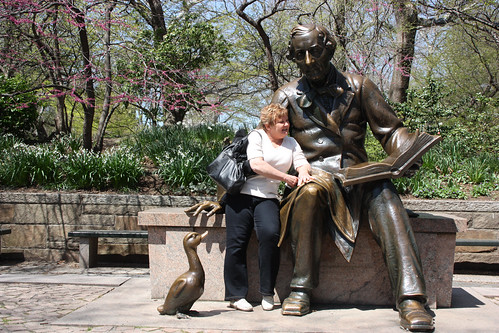 Alice in Wonderland and Sue and Fiona: 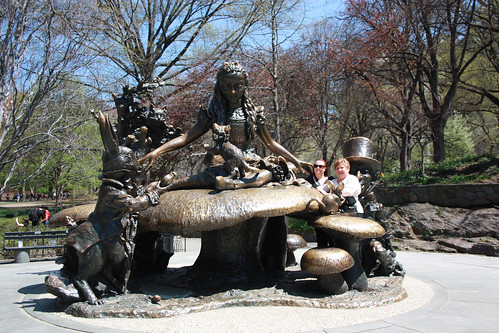 We doubled back past the boathouse again and all the people rowing in the lake and ended up in Bethesda Terrace. Fiona recognised it immediately as a Gossip Girl location but I was better aquainted with it as the place Mel Gibson’s son was kidnapped in the movie Ransom. Fiona kindly posed for me pretending to look for Mel Gibson’s child while I tried to take the photo doubling up with laughter. Fiona, Sue and I climbed the terrace to check out the mall that was at the top of the stairs and then we all continued downtown past the lake. At least, I thought I was taking us all downtown until we ended up back in the ramble and then Belvedere Castle again. I did that a bit wrong! 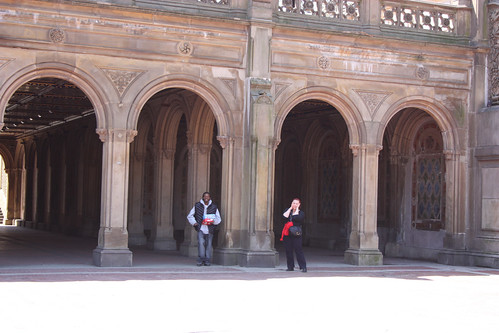 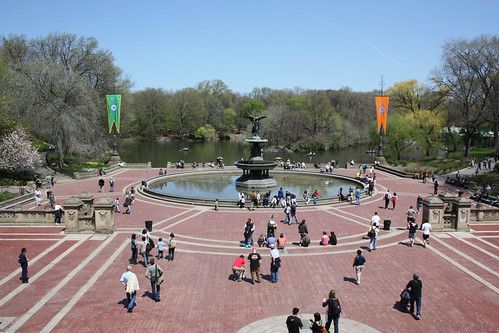 Sue, Pauline, Fiona and Lynne at the lake in Central Park: 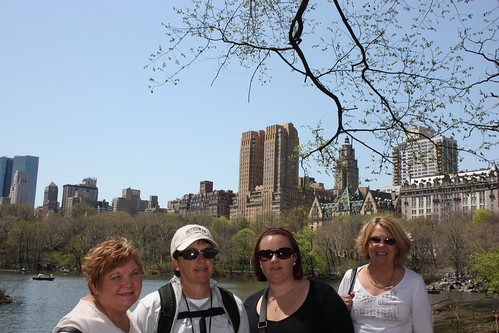 Fortunately we used it to our advantage since we were now near the Shake Shack near 77th street and it was lunchtime. Walked past the American Museum of Natural History (which features in the movie “Night at the Museum” and over to Columbus Avenue where there was a lineup out the door to this burger joint. Shake Shack started as a seasonal shake/burger shack in Madison Square park where it exploded to the point where people were waiting in line for 40 minutes just to get a burger. The new store we were at was designed to cope with large crowds and therefore our wait was shorter. I ordered a sample of everything on the menu I could – the burger, fries, shake, frozen custard and beer. I had been waiting for this meal for over a year and it didn’t dissapoint. The burger was fresh and tasted home made (in a good way) but the highlight of the meal was the black and white shake. Simply the best shake I have ever had, thick, flavoursome and satisfying. Oh god, I want one now! 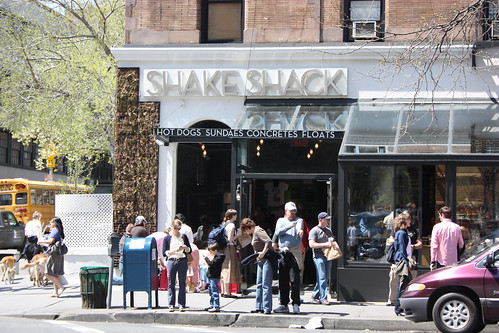 The menu at Shake Shack: 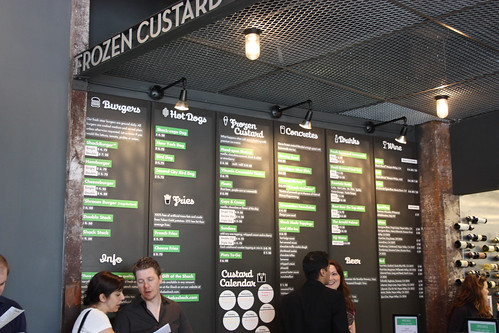 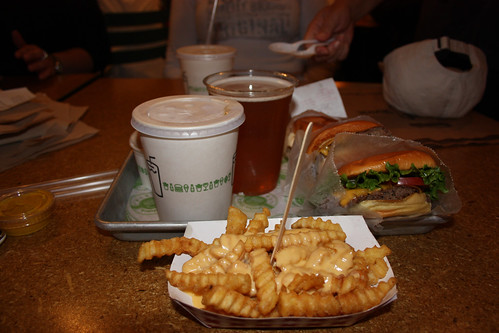 Returning to Central Park we walked via the Dakota Building where John Lennon lived and died. Some schoolkids walked by discussing that it was wrong to take photos of the place, but I disagree. It may be a little bit morbid, but it’s also history and something you can’t pretend didn’t happen. It’s also where he chose to live probably the happiest times of his life with Yoko and Sean so why not celebrate that also. Across the road from the building is a large entrance to the park which takes you through Strawberry Fields, a memorial to the man himself. Fittingly there was a busker playing Beatles songs while people sat around and listened or took photos of the memorial. We used it as an opportune moment to rest. 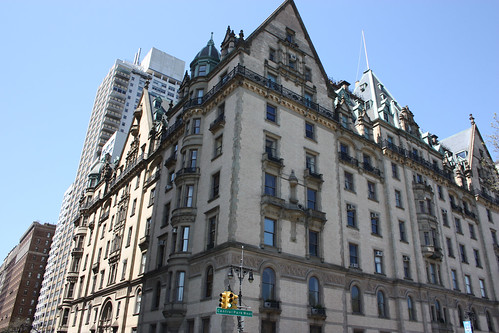 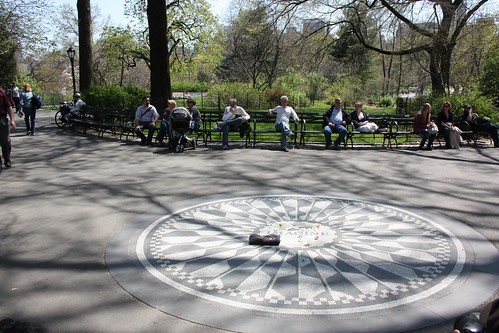 Walking past the Sheep Meadow where there was hundreds of people sunning themselves after a few rainy days we ended up in Columbus Circle looking for the bathroom. In the end we crossed over to the Time Warner Center where we relieved ourselves which was lucky for me because if I had gone in to my first whole foods store with a full bladder I may have made a mess. It was absolute grocery shopping heaven. I have never seen such variety, well displayed fruit and veg and food.  I was aware of the store thanks to Top Chef and I just hope americans know how good they have it with a store like that. 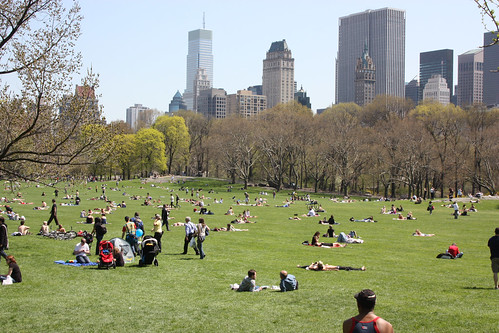 Columbus circle from inside the Time Warner Center: 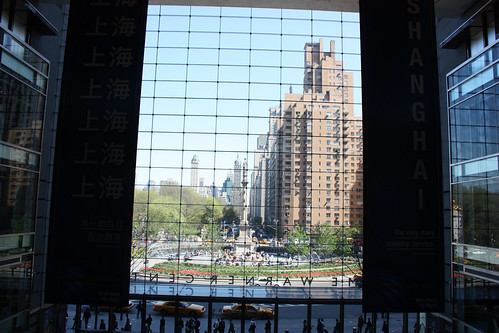 Out of the store and across the street we tried to find a subway but was a little distracted by the breakdancing going on. We knew there was a subway station somewhere but couldn’t see any signs until the breakdancing crowd dispersed and we noticed it was right behind them. Took the subway down to 47th and 50th where we checked out the Radio City Music Hall from a distance. I once again took us in the wrong direction (having a bad day) but eventually we made it to Rockerfeller Centre. The ice rink was long gone and the price to go to the top of the rock was a little too steep so we amused ourselves in the NBC store downstairs looking at all the tv show merchandise. I desperately seeked Tina Fey but she was nowhere to be seen. We were mainly killing time until the Museum Of Modern Art (MOMA) opened their doors for free at 4pm for everyone. 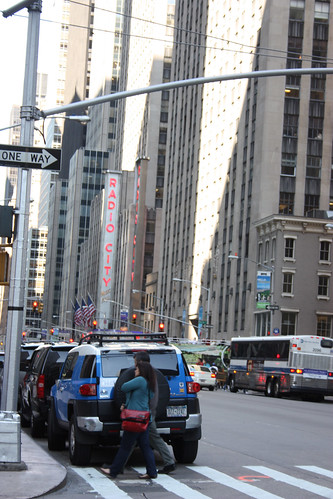 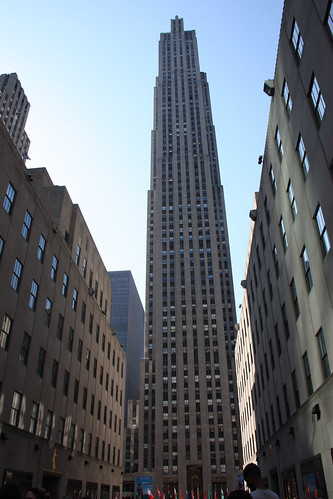 The ice skating rink is no more this year: 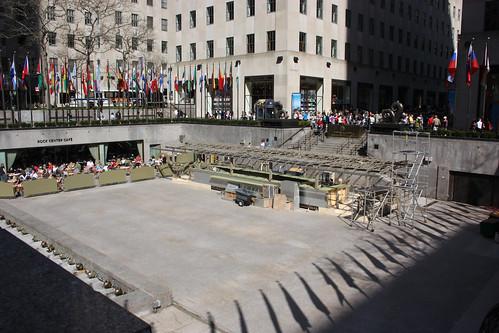 On the way to MOMA Mum, Sue and Pauline went and looked at St Patrick’s Cathederal which they said was lovely inside. Fiona and I couldn’t be arsed to cross the street at this point because we were operating on energy fumes. In the museum we gave ourselves about an hour and a half so it was a race to see everything. I only stopped at the things that caught my eye which wasn’t hard considering there were works by Picasso, Kahlo, Kandinsky and Warhol. While racing around I noticed Fiona and Sue utilising the time by sitting down on the couches, so Pauline joined them and they went outside to the lovely garden while I continued looking. Fiona and I eventually ended up visiting the store which sells all sorts of amazing and excellent things and I ended up with a paper cartoon wallet which I thought was the coolest thing. Even got a sale price on it. 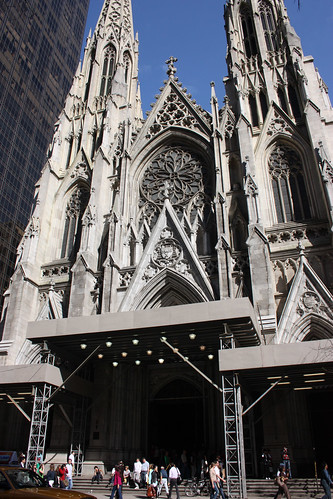 At this point we were walking ghosts as we trudged back to the metro and the hotel where we well and truly collapsed in to bed. For someone who had concussion and had a headache, Auntie Sue was the quiet achiever on this day. We walked a hell of a long way!