Breakfast of champions with cereal we’d obtained the night before from the grocery store. Had a slow start to the day since we didn’t have to meet Joe our New York greeter until 10am in the lobby. At least a month before we arrived in New York we arranged for a greeter to show us around the city. It is a free service, tipping is not allowed but you can donate an amount to the organisation via mail after the tour. We specified we were interested in the World Trade Center area along with architecture and history when filling out the form. The greeter gets to pick from the list of tour requests that best fits their interests and expertise. It’s a bit of a lottery whether you get someone or not, so we were pretty lucky.

We found Joe in the lobby and then he gave us a rundown of the day and  walked us to the metro. We all purchased 7 day subway tickets which would give us unlimited travel on the metro for 7 days for $25USD. On the ride down to Fulton Street he gave us a rundown on how the metro system worked as well as some facts about places we were seeing. 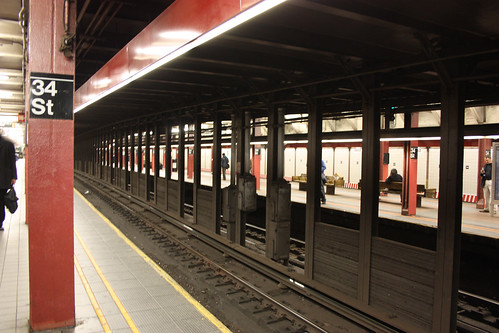 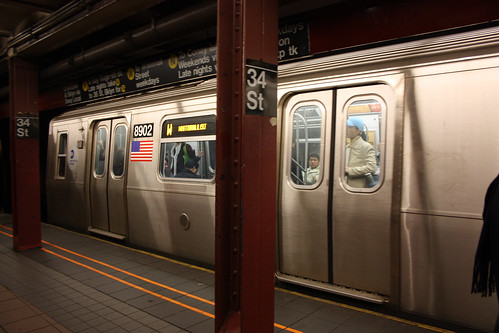 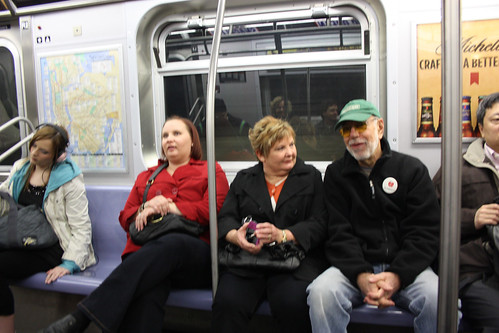 Once we got off at Fulton Street we walked past St Paul’s Church which used to be in the shadow of the twin towers. The priest in the church was one of the first on the scene when the plane crashed in to the building and sadly was one of the ones who died. The Church ended up being a base for the rescuers during the recovery efforts and today is used almost as a shrine for 9/11. The location where the World Trade Center used to be is now a huge construction site and if it wasn’t for the signs on the temporary fences you’d just think it was another building going up. Of course that will change once the construction is finished. 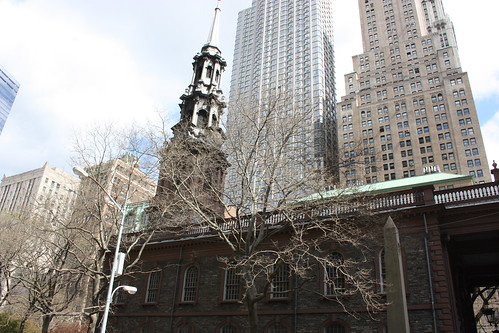 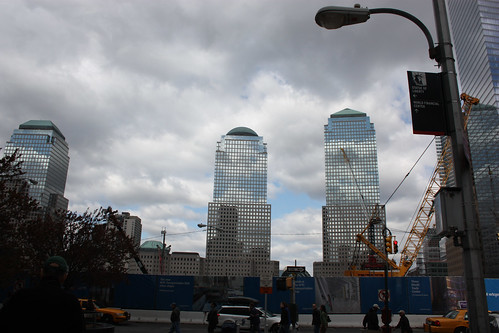 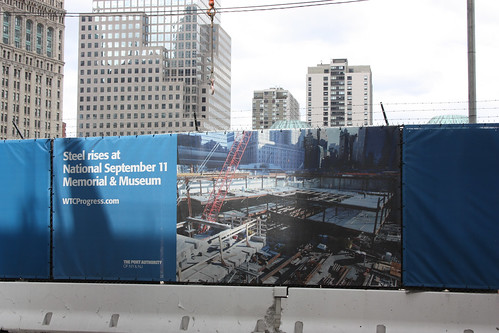 Joe then took us to the Century 21 department store where you can buy cheap brand name clothing like Ralph Lauren, Ben Sherman and Marc Jacobs. It was pretty busy and we perused for a while making a pact that we would come back to do some real purchasing. We had a look inside some beautiful buildings and then listened to some women play instruments in Trinity Church. Outside the Church was a statue of some roots, which apparently was molded from a sycamore tree that had been in the church gardens but was knocked over by the World Trade Center. 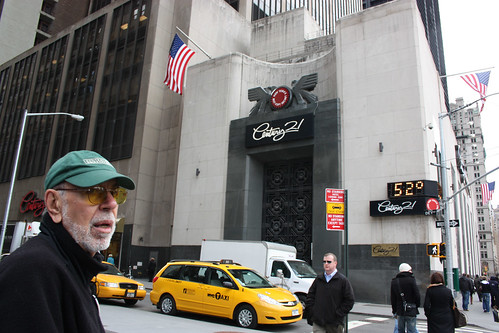 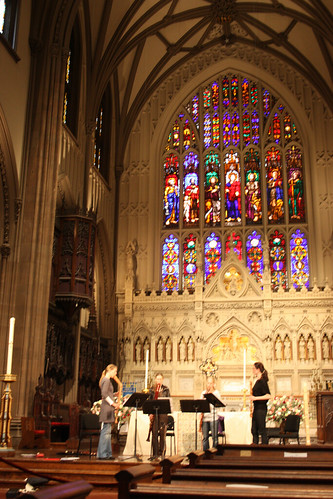 The roots of the sycamore tree statue: 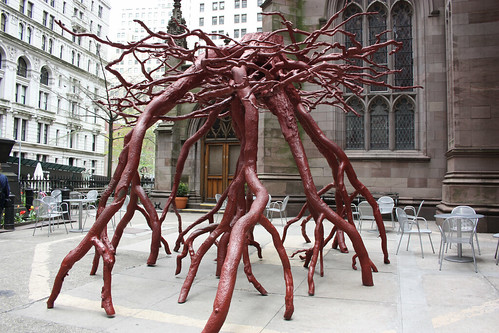 We then wandered over to check out Wall Street. Joe was a retired stockbroker so we had a few interesting discussions about money and the global financial crisis. There were a lot of tourists outside the New York Stock Exchange and it was a little trippy to see armed guards protecting the area. I was amused that Trump had bought a building basically in the face of the New York Stock Exchange and I interpreted it as a “I am the King of NY” move. 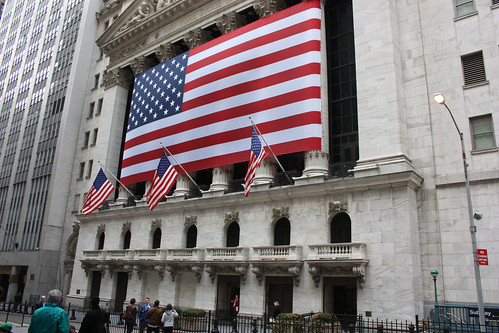 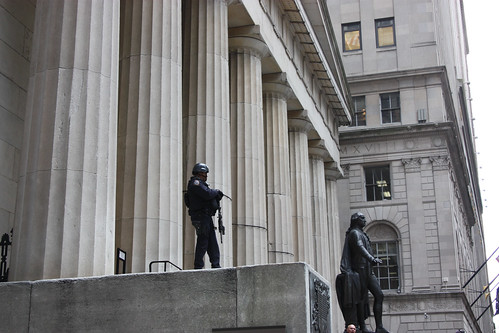 We then doubled back to check out the Charging Bull statue which is a well known symbol of Wall Street. Lots of people were having fun with the bull, especially around his backside area where his testicles were rather visible. 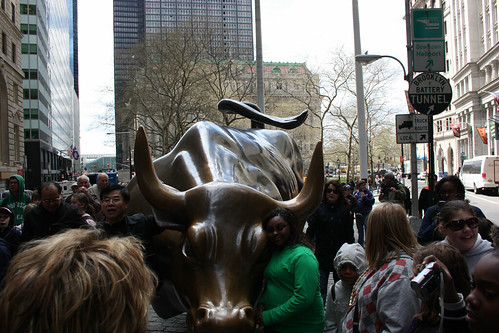 This lady approves of the bull’s ass: 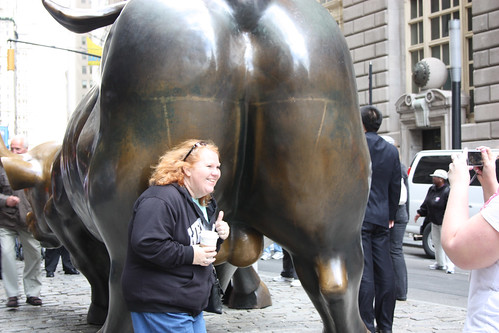 In Battery Park we saw The Sphere which was once at the bottom of the World Trade Center and mostly survived intact. There were a few war memorials in Battery Park but it is mainly known as the place you catch the ferry to the Statue of Liberty from. We had already booked our ferry tickets for Monday so we didn’t spend too long in that area.

The Sphere in Battery Park: 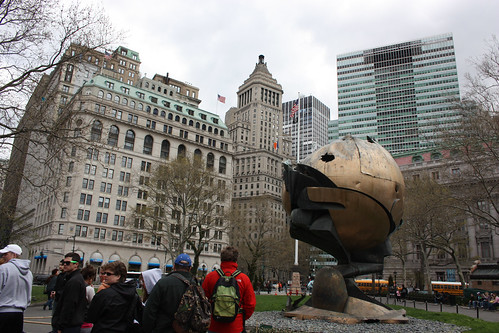 Our first sighting of the Statue of Liberty: 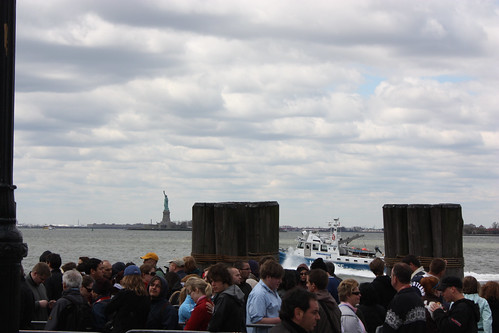 Then walked to the South Street Seaport via a toilet stop at Customs House and the Staten Island Ferry port. We saw a memorial of the Vietnam War as well as the helicopter pad where officials land when they are going to address the UN. The South Street Seaport Food Court is where we went for lunch and from the deck outside we could see the Brooklyn Bridge. I had Bourbon Chicken for lunch which was pretty good but we all starting to get a bit tired at this point. 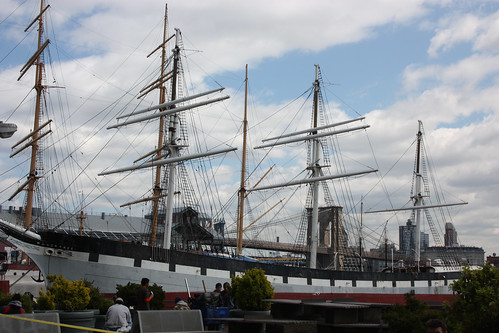 The deck at the South Street Seaport: 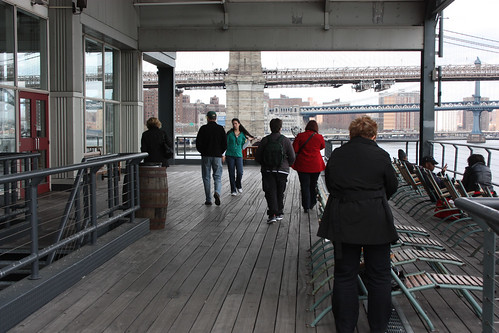 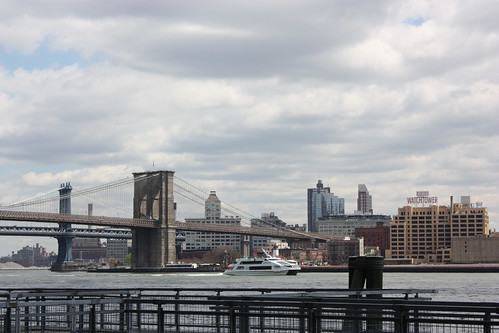 Joe took us back to the Fulton Street Station after pointing out to us the cheap tickets for Broadway shows store. We took the train uptown (the terms uptown and downtown now make sense to me after being here) to Grand Central where we were to say goodbye to Joe. Before we said goodbye however, he took us in to the Hyatt which had a lovely waterfall (because it used to be a Trump building) and clean toilets. We also investigated the Chrysler Building which is the reason why I love art deco. Even the elevators were pieces of art

The waterfall at the Hyatt: 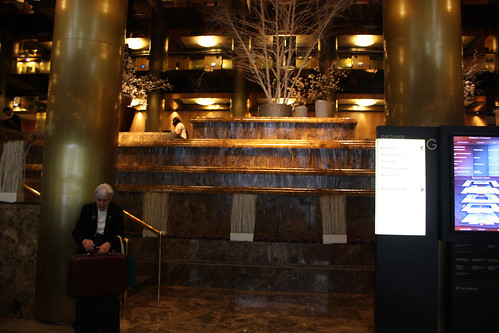 The elevators in the Chrysler Building: 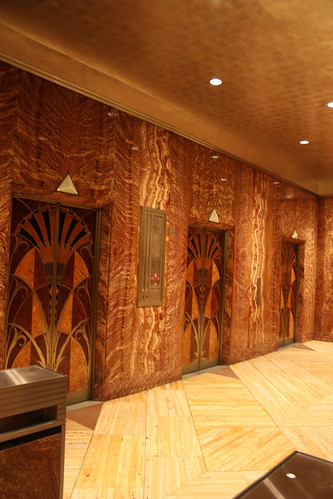 We walked along the beautiful Grand Central Concourse, whispered across the room to each other in the arched section near the Oyster Bar and just gaped at the beautiful architecture of the building. Joe then said his goodbyes while we said our thankyous and he headed home. We explored the food market in Grand Central then took the crosstown shuttle to Times Square. It was still afternoon so we didn’t have the full effect of the neon, but it was still impressive. We walked back to the hotel on 31st street from 42nd street and rested in the hotel room for a few hours. 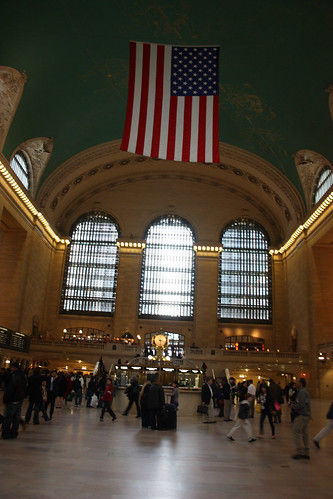 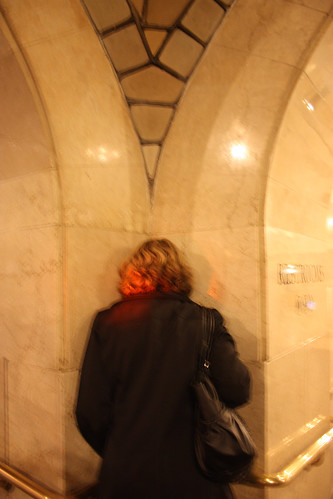 The arches of the Whispering Wall: 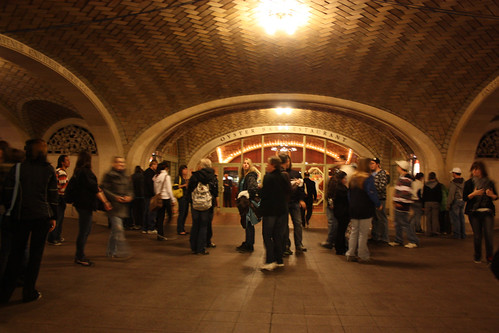 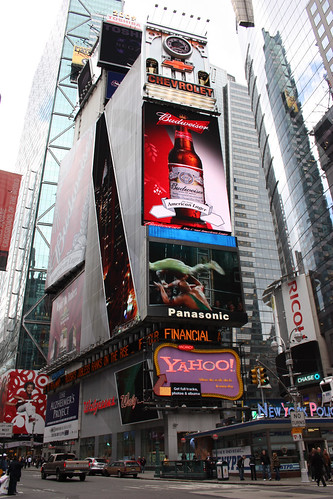 I woke up a little earlier so went across the road to Starbucks to surf the net then took Pauline to dinner at Gray’s Papaya – a famous hot dog store nearby. It’s well known from NY tv shows like Seinfeld, Friends and How I Met Your Mother. We got the special which was two hotdogs and a drink (coconut champagne). The hotdogs were really good although I shouldn’t have ordered it with both saukraut and onions. Novice mistake. On the walk back to the hotel we did some sneaker gawking and stopped in at Old Navy. We crossed off a lot of my to do list in just one day which I was really impressed with. 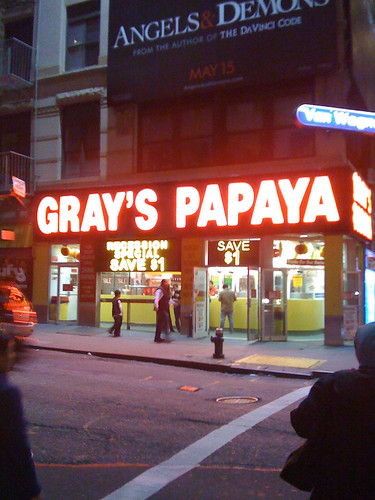 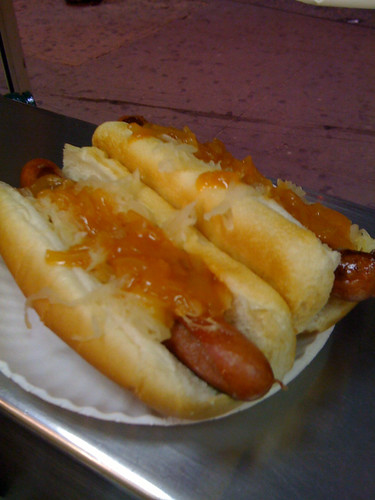 Today I’m rocking my brand new Nike air prestige in honour of my first full day in NY.  http://twitpic.com/3ts6v
Today we meet our free NY greeter and visit the financial district and world trade centre.
@KRTNYC Thanks. I like your city already!
@antiparticle yeah it looks like it’s going to be HOT! Better get me some shake shack before then cause I don’t want to stand in the line.
@j3thr0 I agree. It wasn’t much. But I liked wall st. Still haven’t finished the tour yet.
It’s freezing outside while we look at the Brooklyn bridge.  http://twitpic.com/3ubtq
Omg. The Chrysler building is stunning inside.  http://twitpic.com/3ug1b
Guess where I am now?  http://twitpic.com/3ujwq
@Contendo that is the intent however things don’t always work out.
Dinner. The recession special.  http://twitpic.com/3v3pk
Probably should haven’t ordered both saukraut and onions on the hot dog but the sausage was yum.  http://twitpic.com/3v7gc
@j3thr0 he was good. 75 yrs old but couldn’t tell. It’s kind of like a friend taking you around who knows lots of facts.