Checked out of the Hilton Garden Inn and left our bags at hotel. We enjoyed our stay there and it’s location was really good for walking around the middle of Philadelphia.

Breakfast was Amish (or dutch) pancakes eaten on the main street of the road because we were meeting Sue and Fiona outside the Hard Rock cafe to do a tour of Macys around 10am. Unfortunately the tour started at the visitor centre, not the store (i got it wrong) so we just had a look around ourselves. They filmed mannequin there (as documented in the fantastic Ween song “Freedom of ’76” except then it was a Woolworths). The Organ was absolutely stunning. 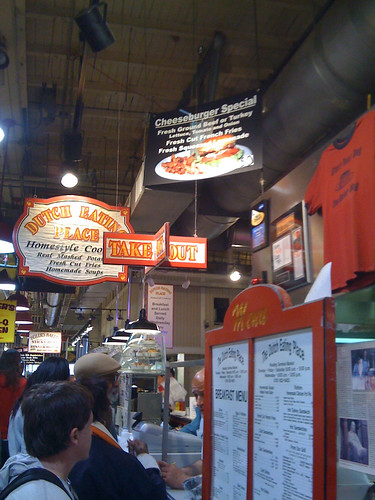 Pancakes from the Dutch Eating Place: 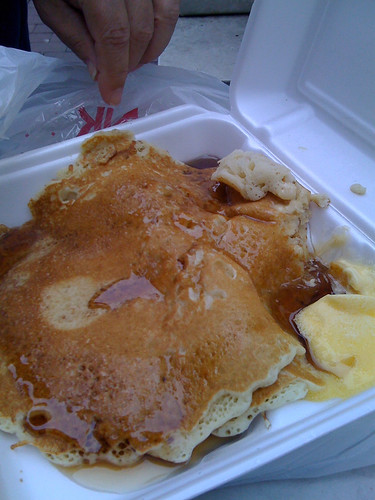 The organ in Macys Philadelphia 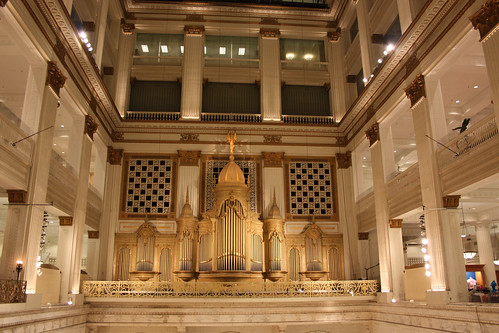 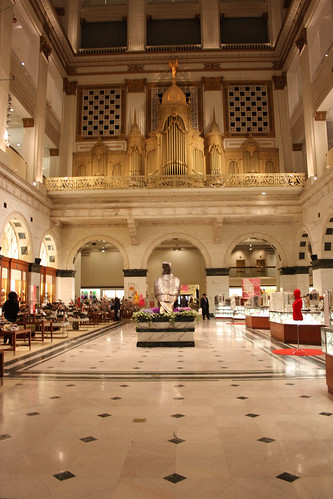 After leaving Macy’s we caught the metro to Penn’s Landing. The metro in Philadelphia isn’t very kind to tourists and not very explanitory. In the end the token seller guy came out of his booth and explained it to us – he looked like he had to do that often. He sold us some tokens which allowed us to go through the turnstyles. $2 to go anywhere is the base fare which I think is a great price. Unfortunately it may be why the Metro is old and ugly. Hopefully one day they’ll switch to cards and sell ride all day ones.

Sue and Fiona try to figure out the complicated old school token method of the Philly metro: 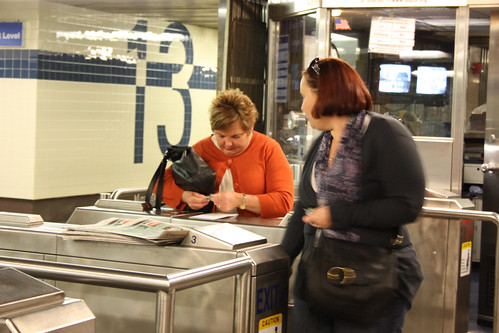 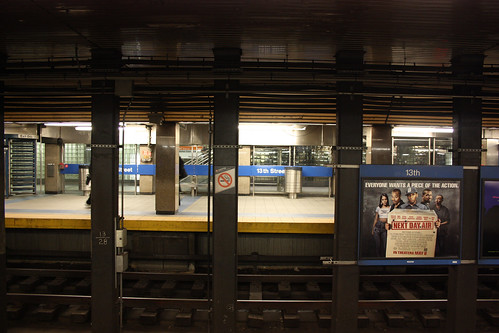 Penn’s landing wasn’t the wooden boardwalk i expected, it was kind of old and ugly. Wanted to go to an old soda fountain nearby but it didnt open til 12pm so we walked back to the Betsy Ross house and Elfreth Alley to show Fiona and Sue who hadn’t seen it with us the day before. When we got back to the soda fountain they still weren’t open even though it was after 12pm. I guess they don’t often have people waiting out the front at opening time. They opened for us and I got an Eyptienne egg date drink. Orange and rose with an egg and a date fizzy drink. It doesn’t sound that great but I really enjoyed it.  Auntie sue got a stock market crash sundae which was chocolate and peanuts. Yum. Pauline had a coffee milkshake and i think Fiona had a malted milkshake. They make the soda there using soda in the way that you would a soda stream machine – but much bigger and cooler. Yeah, cooler than even a Soda Stream. 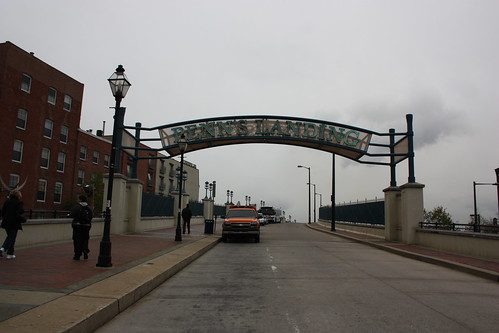 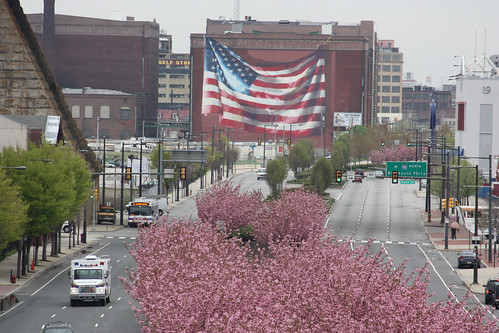 Franklin Soda Fountain (felt like I was in the 20s): 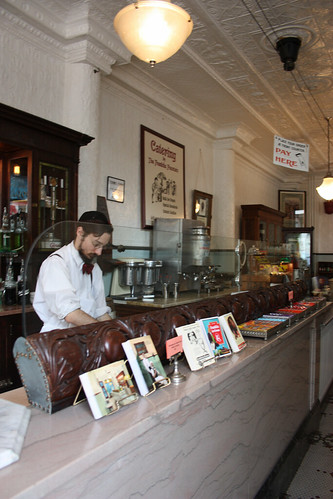 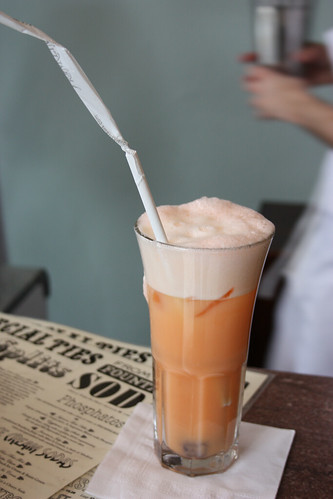 Pauline, Mum and I headed to the Mutter Museum while Fiona and Sue tried to catch the hop on hop off bus to National Museum of Art. Unfortunately my reading of the maps was a bit off and the train went a stop too far, so we had to catch a trolley back to 22nd street. No big disaster though since the trolley was cute. 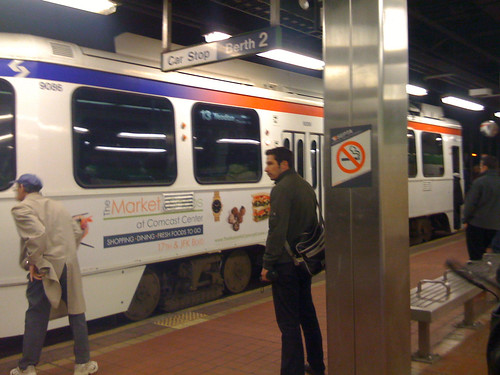 Mutter museum had body parts in jars, so Mum decided to walk to Ben Franklin Parkway instead.  Pauline was fascinated by everything, as was I. They had John Wilkes Booth’s thorax (the guy who shot President Lincoln), conjoined twins skeleton and a very tall mans skeleton. They don’t let you take pictures in there unfortunately so I have no photos of all the cool things we saw. If you have an interest in the human body or medicine this is a really interesting place to visit.

Meanwhile Mum had walked in the wrong direction and headed in to the scary part of Philadelphia. I had shown her the parkway direction before we went in, but when she came out she turned the wrong way. She kind of knew she was in the wrong place when the police kept circling the street to make sure she was ok. She walked for 30 mins then turned around and came back. Amazing how scary it can be when you get lost. From then on, whenever I saw a bad area in America I thought “Mum would like to take a walk here”. On the walk back we saw some sort of demo around City Hall where they showed off their fancy recycling rubbish trucks. 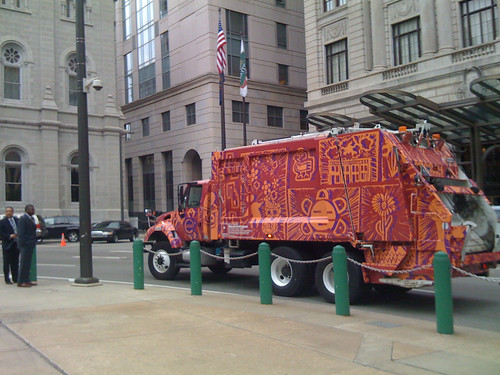 Back to the hotel via the Reading terminal Market where we found Fiona and Auntie Sue. Lunch for me was an italian hoagie, then we picked up our bags and caught the metro to 30th st station. Got stuck at 15th station for ages which was really annoying.

30th st station was beautiful and where they filmed the movie Witness with Harrison Ford and Kelly McGillis. I went to the toilet and even though it was the womens toilet (the crime happened in the mens toilet) I still got that “this was in a movie” thrill that you sometimes get. We sat and ate there for a while then crossed the street to get on the Bolt Bus. 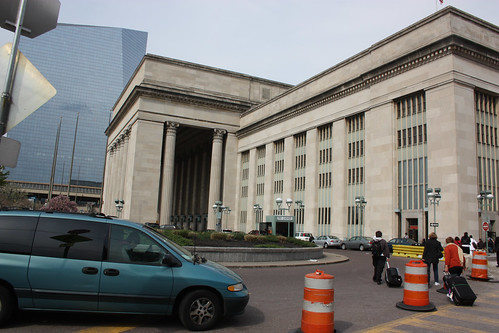 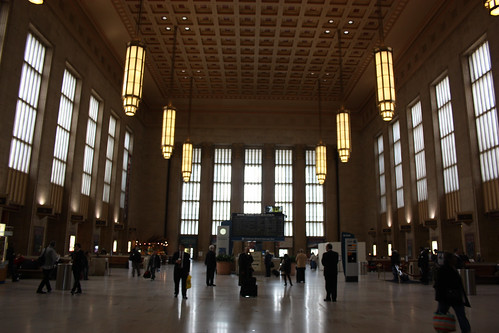 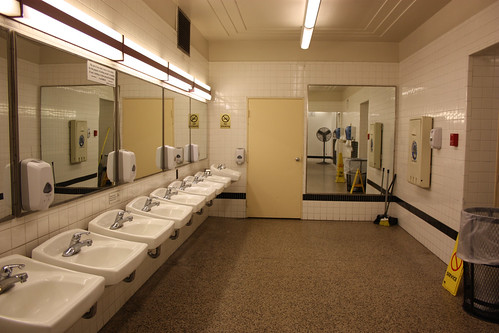 The Bolt Bus is one of a few bus lines that are revolutionizing bus travel in America. Since security caused so much pain for domestic airplane travellers the bus has taken off again. For around $13USD you can travel to New York from Philadelphia on comfortable seats on a bus with not only a toilet but free wifi! An excellent way to kill time when all you have to look at is freeway. Unfortunately the Bolt Bus was dirty from track team spilling soda on the floor  on the trip befor us, so the ground was sticky. The bus ride was fantastic however, she was a good bus driver and we felt safe. Went through New Jersey which was very industrial then got our first view of New York. Excitement levels went through the roof for me. Almost got tears in my eyes. We got to Manhattan via the Lincoln tunnel then got off the bus at 34th and 8th st. 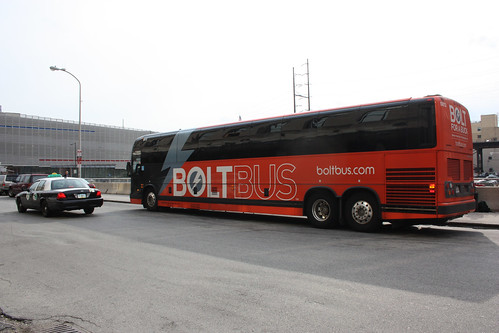 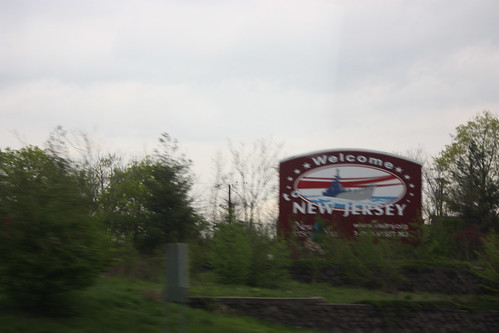 First sighting of New York in the distance: 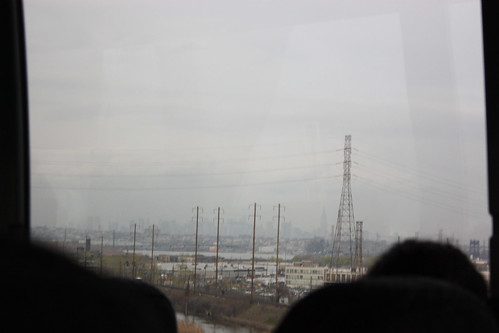 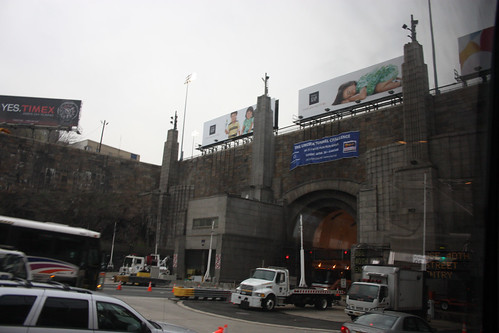 Walked a few blocks lugging our luggage which was a bastard to carry by this time and checked in to our hotel, leaving mum outside.We were elated to get rid of the bags. Kitchen was a good thing to have after living out of hotel rooms for a week, bathroom was small but the bedroom was big. 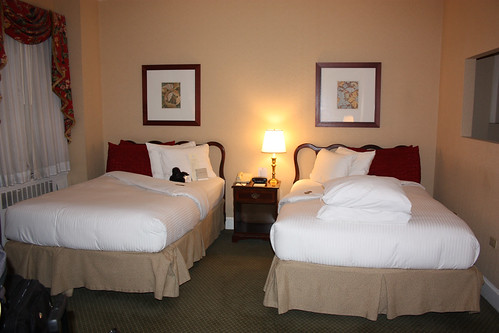 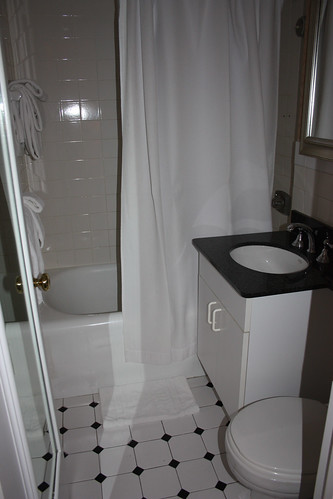 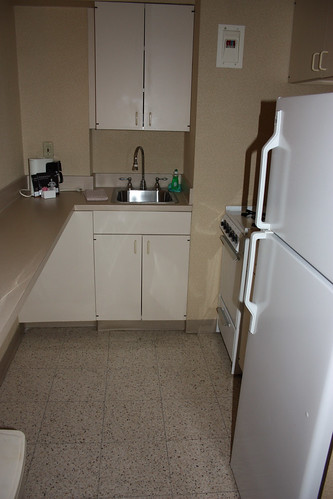 Went outside again to walk down the block to see what was happening. Not much, so we bought cereal and milk and stuff at a small grocery store two doors down from the hotel, then we collapsed in to bed.

Last day in Philly, this arvo we catch a bus to New York City!
Breakfast with the Amish in reading terminal. I’m having pancakes but these apple dumplings look yum.  http://twitpic.com/3ropr
In macys where they filmed mannequin. Stunning.  http://twitpic.com/3rq0i
@GeekPornGirl yup and the pancakes were yum even though we ate it in the street.
We found platform crocs! For some reason they are on sale http://twitpic.com/3rqqd
Can’t say the philly metro is pretty. Old and ugly more like.
@j3thr0 2 hours.
@djackmanson I know they are comfortable but can’t they make them pretty too?
Visiting elfrieths alley.  Cramped but cute.  http://twitpic.com/3rup1
Having an old style soda at a soda fountain. Mine is orange, rose and egg. I like it!  http://twitpic.com/3rwsw
It’s not for everyone but I had fun in the mutter museum looking at human specimens. You need a strong stomach to look at gonorrea.
Damn. Went to get some Amish food for the bus ride and they’ve closed down at 3pm! Nice life. Only open wed to sun 8.30-3
@GeekyDragonGirl or I got it wrong. I may have read sat as sun.:) too late to check now.
At 30th st station admiring the main concourse. They filmed witness here.  http://twitpic.com/3seiu
About to get on the bolt bus to NY. See ya Philly. I liked your food better than DC.   http://twitpic.com/3sgkc
Some track team was on the bus before us and spilt drink all over the floor so it’s sticky. Wifi works as advertised though.
@Kelsbells damn. Can u ring and ask about them?
@matthew_hall it’s like that is it. Lugging our luggage two blocks isn’t going to be fun then. 🙁
View from my laptop as we go down the freeway. She said be careful his bow tie is really a camera! http://twitpic.com/3skkl
@matthew_hall If rain is all I have to deal with in NY, I’ll be lucky.
@ireckon Nice pickup on the reference. I’m hoping to see the New Jersey turnpike.
@ireckon Nah, that is in a few more weeks.
I have to say, having wifi on a bus is the bees knees. I can only look at other cars on a freeway for so long. google reading is more fun.
Just passing Newark airport. Nearly reached the big apple!
I can see the buildings of new York. I’m a little bit excited now.
Checked in to hotel and mum is excited about the kitchen. I’m not excited about the $10 a day wifi but starbucks is across the road.