Breakfast was an egg and cheese roll from a street cart. He scrambled the eggs then and there and boom, we had a fresh and non greasy egg roll. I was blown away at how good it tasted. They have great bread in Philadelphia. 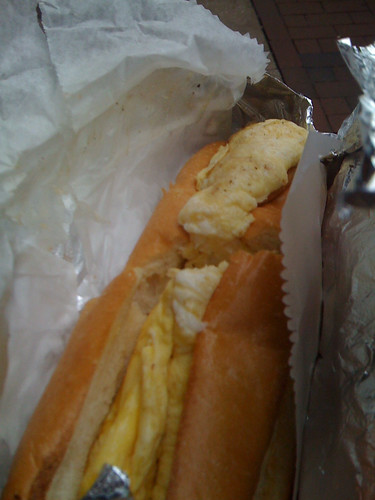 Walked up to the Philadelphia Visitor Center from our hotel and was pleased to arrive just as the free film was just starting. Unfortunately there were technical issues so we just heard and read the words, no picture. Decided to leave halfway through and come back later after they said they would fix it. Visiting Independence Hall where the Declaration of Independence was created is free, but you have to get tickets for a specific time. We got our timed tickets to Independence hall at 1.30pm, but since that was a few hours away we had to kill some time. Decided to take a walk around the area following a walking map I found in the Visitors Centre. We saw a building where Thomas Jefferson wrote the first few drafts of the Declaration, Congress Hall which served as the seat for Congress for a while, Betsy Ross’s House – the lady who created the first American Flag, Elfrieth Alley which is a cute little alley where Irish migrants used to live and the Liberty Bell. I sort of knew this area from the movie National Treasure but like most things it wasn’t quite like you imagine it. 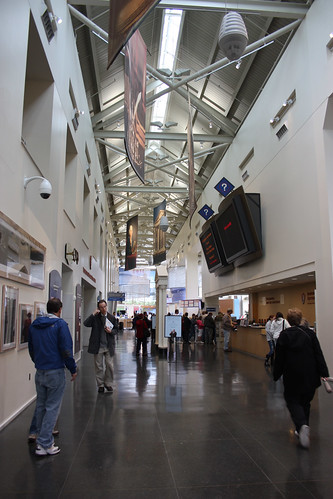 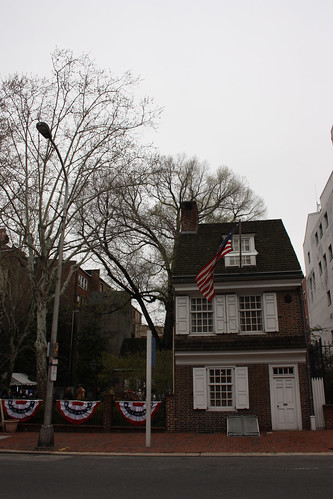 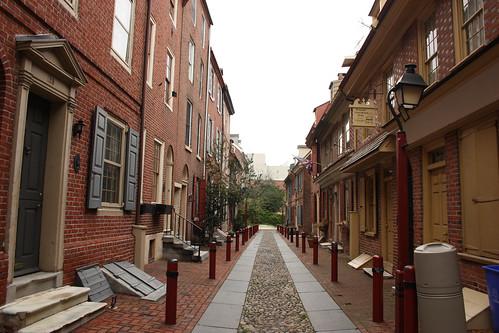 Pauline, the Liberty Bell and Lynne: 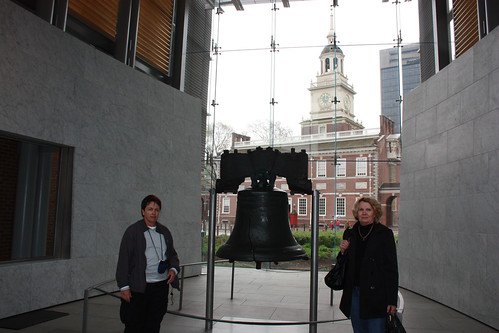 Had to arrive early for Independence Hall because you need to go through a security check before going in. It’s the usual bag and coat thing you become used to after being in America for just a few days. They also keep cars away from driving directly past the Hall, nor can you come too close as a pedestrian. After lining up for a while we are shuffled in to a room where we are told the history of the building. The guy liked to repeat the dates of the important moments in the Declarations creation, so by the end even I knew them (can’t remember them now of course). We were then taken in to the Supreme Court Chamber, then crossed the hall to the Assembly Room where the Declaration of Independence was agreed to. Washington’s chair with a rising sun at the back was particularly noteworthy along with Benjamin Franklin’s glasses. 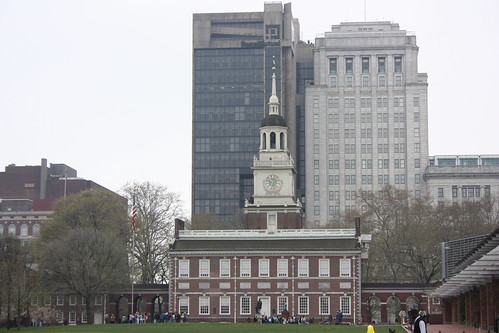 The Assembly Room and our date obsessed guide: 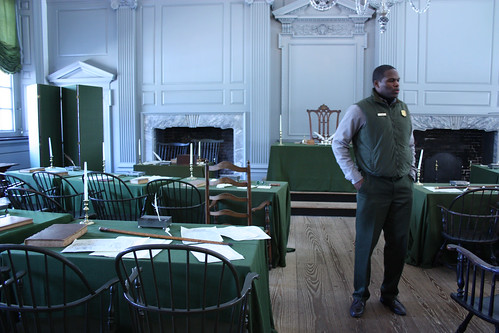 Back at visitor center we watched the film and had horrible coffee, then we left Fiona and Sue to do a hop on hop off bus while Pauline and I took a bus to the Philadelphia Museum of Art and mum hobbled home since she had a horrible heel injury from some steel in the bottom of her shoe.

Pauline and I took a bus to the Philadelphia Museum of Art and paused at the bottom to get our photos taken with the Rocky Statue. The museum is the one that Rocky runs to the top of in the first movie and then clenches his fists in the air. It was fun to stand at the bottom and watch a bunch of boy scouts run to the top in a group and mimic the boxer. At the top there is a beautiful view of the Ben Franklin parkway and for the first time I thought that Philadelphia was pretty. We didn’t go in to the museum since we weren’t $14 interested enough and instead walked back along the parkway to Love/JFK plaza. The plaza was filled with a lot of homeless people soaking up the sun. 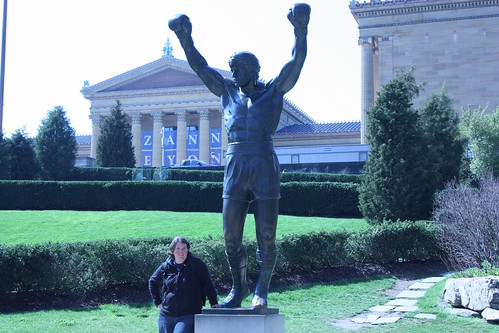 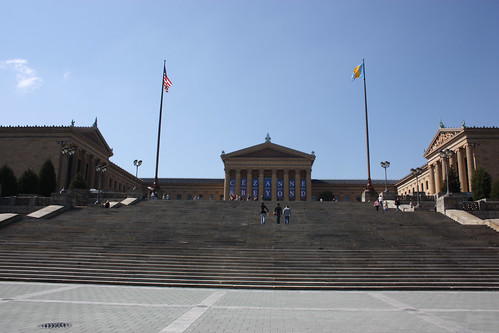 Pauline climbs the Rocky Steps – the most animated you may ever see her:

The view from the Rocky Steps: 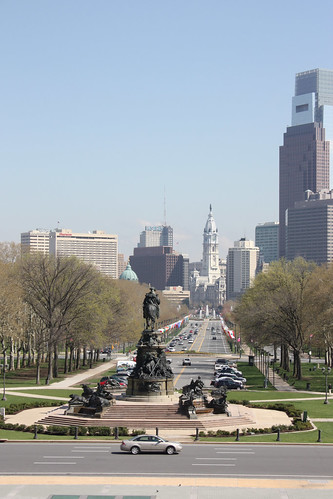 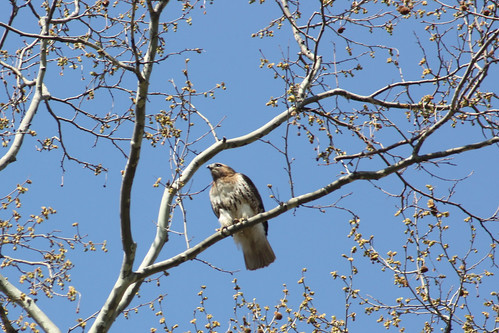 Logan circle at the opposite end of the parkway to the Rocky Steps: 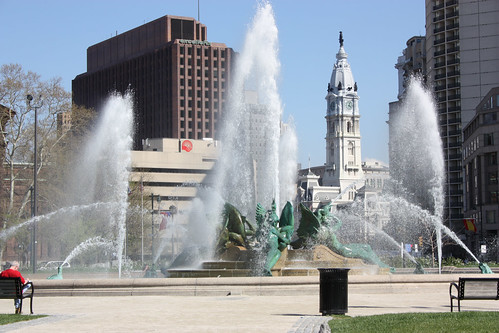 Love Plaza (with the Philadelphia Museum of Art at the other end): 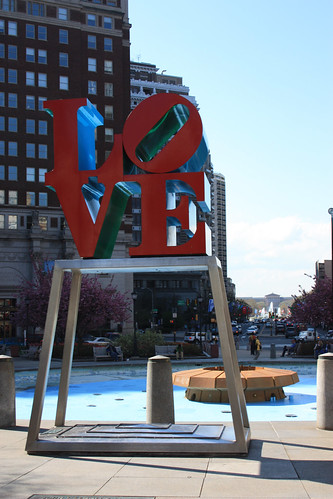 Since my AT&T card was working so well on 3g we went back to the store and bought Pauline one, where the guy from the day before was surprised to find mine had been working. I think they were jealous that in Australia we can unlock our iphones. 🙂

As usual, I always have a sneaker quest and this time it was to go to Ubiq which was housed in a creaky but beautiful old building. Although I found some good kicks, nothing stood out enough for me to make a purchase. Instead Pauline and I went to Zio’s for a pizza thanks to recommendations from Yelp. The pizza had the most incredible base and wasn’t in the least bit greasy. They were huge slices and we didn’t think we’d eat it all, but turns out we were ravenous and devoured the lot. 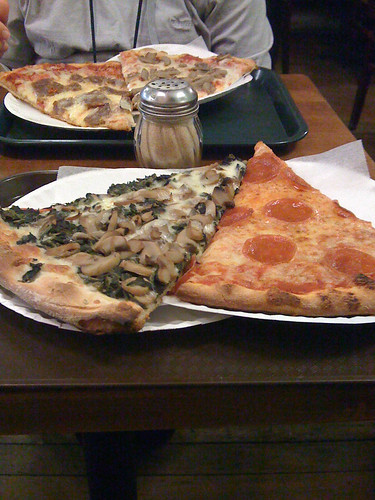 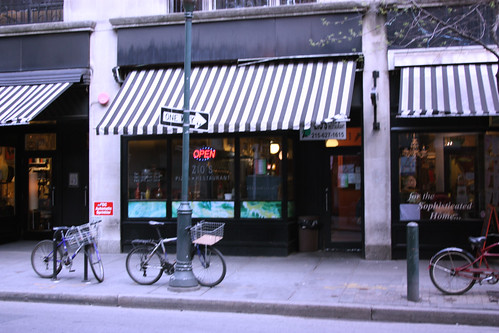 Across the road there was the Apothecary Cocktail Bar which I was dying to go to since they had a rooftop bar but it was shut for some reason. Instead we went and got gelato at Capogiro where Pauline ordered a gorgeous bittersweet coffee and caramel 2 scoop. My turkish coffee and cinnamon 2 scoop was a little too tame with their flavors so I was a little bit disappointed. 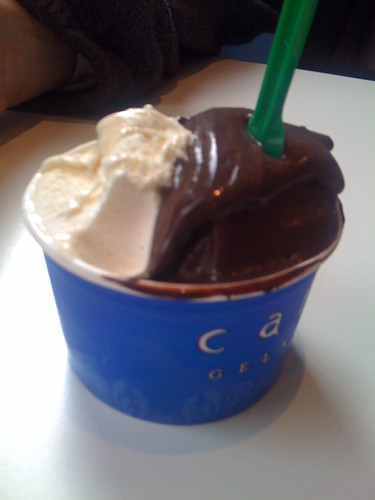 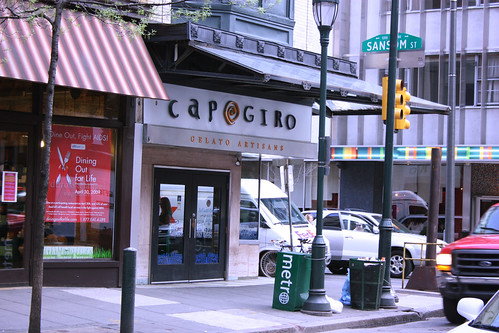 Afterwards we walked back to hotel to meet mum in room and just collapsed there for the rest of the night.

Bed in the hotel not so great. Two of us on a double that sags a little in the middle. I’m a bit sore this morning.
Off to visit the liberty bell. Yesterday was a day of no tourism so we’ll make up for it today.
This cost me $2 from a street cart and was fresh and great!  http://twitpic.com/3pore
About to do a tour of where they signed the declaration of independance.  http://twitpic.com/3pvsb
4 hours ago it was overcast and you needed gloves. Now it’s blue skies and no jumper. Could almost be in Melbourne.
Stumbled slowly up the rocky steps.  http://twitpic.com/3q9lq
View from the top of the rocky steps. Aka museum of art.  http://twitpic.com/3q9ru
@camds I’m awake! It’s 4.30pm here.
Once again we shouldn’t have ordered so much! Bought these at zios. Recommended by yelp.  http://twitpic.com/3qb4w
Actually, still had room for gelato at capogi. @digitiel got a better choice than me.   http://twitpic.com/3qbf2
@danoz75 food is good here. Learnt lots about the constitution. Ben franklin parkway my fav view. No Bruce Springsteen seen.
Mini was not booting. I was freaking out. Thanks to iPhone and wifi and google, it’s now working and I am calm. Fsck did the trick. Phew.
@danoz75 My brown and green pair don’t get out much anymore due to overuse, so these are their replacements. Don’t think I’ve finished. 🙂
Celebrating the revival of my mini with a bud beer. Sue and Fiona are out doing a ghost walk. Hope their hair doesn’t go grey.
@danoz75 This place was shut today when I tried to visit. You are going to have to go for me. http://www.apothecarylounge.com
My mother has decided she needs every drug they advertise on american tv. The thing is, there are a LOT of ads for drugs on tv.
A storm in philly again tonight. Makes it moody fot auntie sue and fiona’s ghost tour.