Yet another day of missing photos. 🙁 *Update – the photos were recovered off the external hard drive*

Had a restless night in the Olde Amish Inn. The bed was rather uncomfortable which made it difficult to sleep. But it did have a mirror and the sink outside the room where the toilet and shower was, which is good when you have a few people that need to get ready. But a rainy and cold morning made it hard to get started. At least we had coffee and a muffin from the front office at the Inn to kickstart us.

View from the bedroom at the Olde Amish Inn 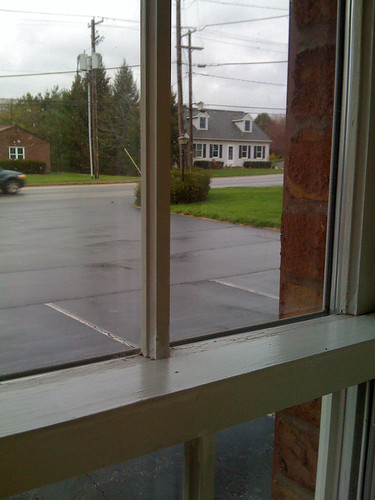 Packed up car, set a course on the gps and looked out the window listening to Blend the sattelite radio station. Even though we were following a highway, it wasn’t a freeway which meant that there were lots of interesting houses and things to look at. The drive took about an hour and a half and we arrived at Philadelphia Airport around 9.40am, dropping off the car at thrifty. They’d overcharged us for arriving late and without filling it with petrol, but we spent some time in the office explaining the car swap and the “not prepped” status of the minivan. We then got a shuttle bus from thrifty to the airport.

Yes, Beware of Agressive Drivers, they can be agressive: 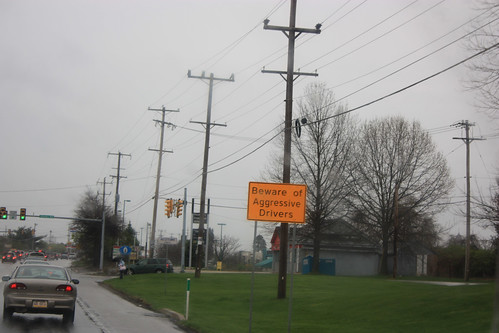 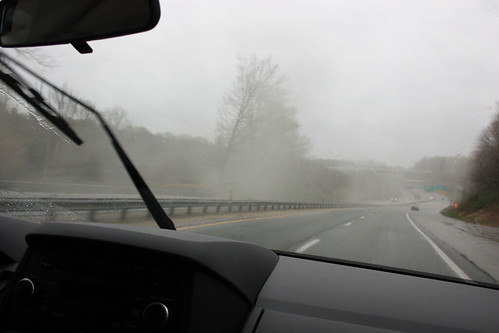 Caught a train from the airport to the city. We had a chat with a guy on the platform while we tried to figure out where to buy tickets. Turns out Philly likes their trains old school – you buy the tickets on board. Train had old bench seats, the conductor sold us the paper tickets which he shoved in to the seats. I felt like I was in the 70s. Unfortunately our first view of Philadelphia was rubbish on the hills on the train line. For a city that was a huge part in the beginning of their nation it lacks a little pride in it’s public infrstructure. I’m guessing that the city may not be that well off. 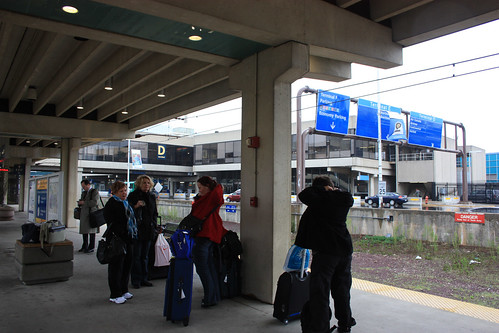 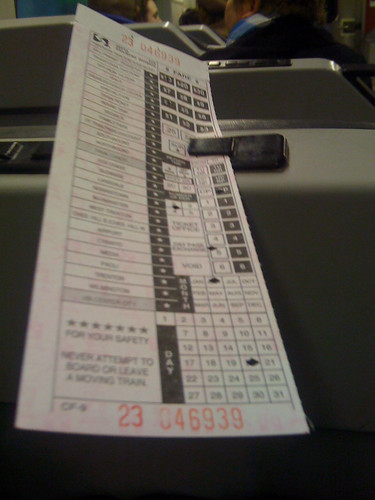 Arrived at East Market Station and walked the wrong way with our big bags. Turned around and walked the long way round to the hotel. It would be a bit of a theme for the day. At 11.30am it was a little too early to check in, but she let us check in anyway and even gave us connecting rooms.

Ready to brave the rain on the walk to our hotel: 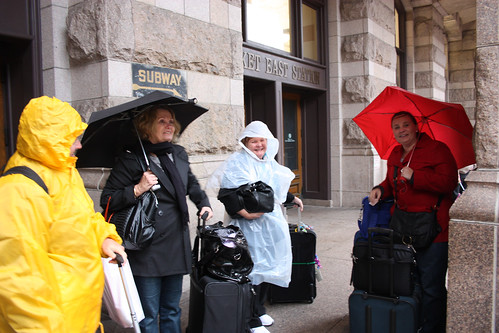 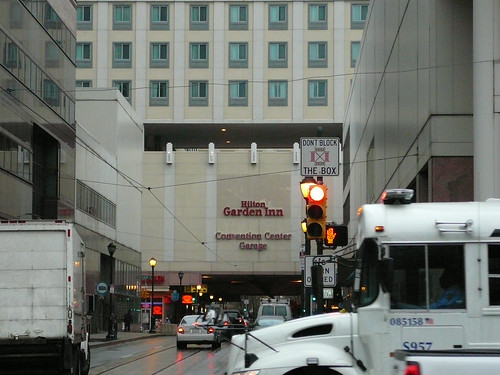 The room at the Hilton Garden Inn: 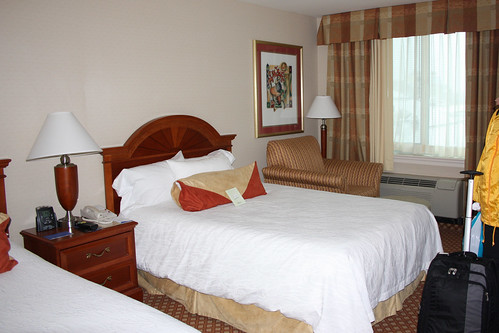 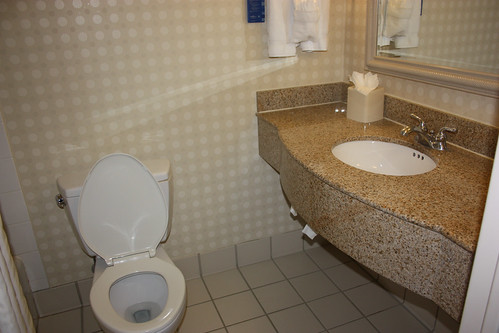 The view from the room: 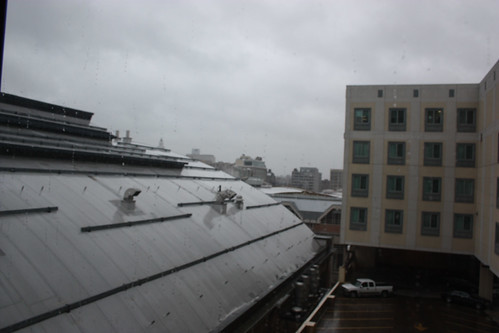 Dumped our luggage and then went to the Reading Terminal for lunch. Amazing place for fresh and cooked food, made me jealous yet again that Brisbane has no permanent food market. The Amish sell their wares there, but they don’t turn up  until wednesday. There is even a beer garden in the market! I bought a philly cheese steak with sharp cheese and onion. Pauline had same but with spinach and garlic. Bun was so fresh and yum. It doesn’t look like much but I totally enjoyed it. 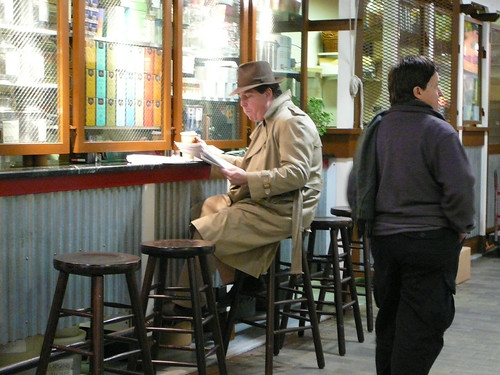 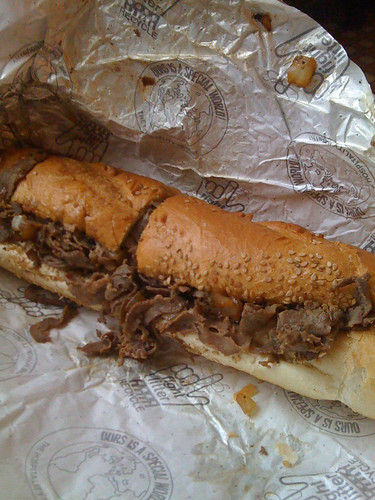 Decided to go looking for an at&t store to buy a 3g sim for the unlocked iphone but again took us in the wrong direction in the rain. Found jewelry avenue though where virtually every store was a jewelry store. No one was on the streets, seemed more like a sunday. 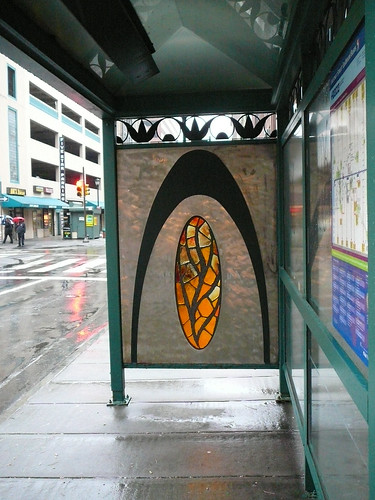 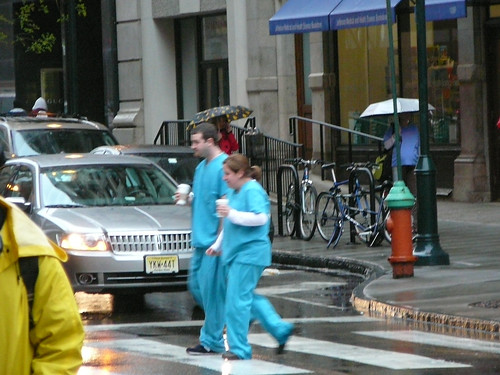 Heading back the right way we found the store but he had no go cards and sent us to another store. The guys at the store weren’t convinced that the go phone sim would work, but we figured for $25 we’d try.  It worked a treat and although not the cheapest data plan on the planet at $20 for 100MB, it was my only option. I hated that it alerted me constantly to how much I spent whenever I used the phone, even if it was nothing, since it kept the iphone screen on and wasted the battery. Ended up getting in the habit of waiting a minute to dismiss the annoying message before putting away the phone. Walked back to the hotel down market street past the beautiful city hall. 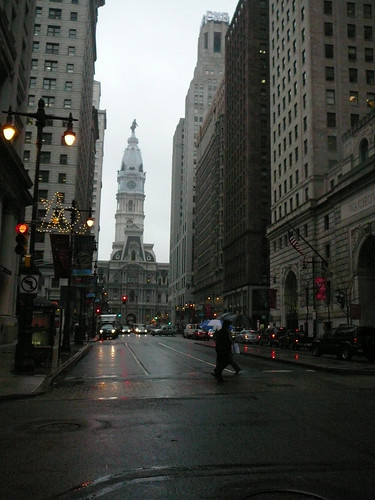 Went through reading terminal again to pick up some snacks for dinner, then spent the evening in the hotel doing our first washing of the trip.

If I’d known that jogging was sold in a jug I would have bought it years ago: 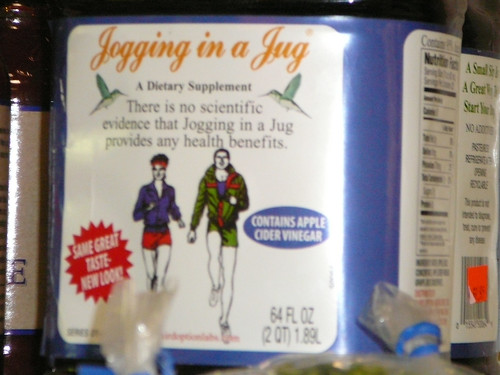 Rainy wake up in Ronks PA. We’ve been through Paradise and I’m hoping we get to go through Intercourse but it is unlikely.
Roads in PA are shit. The guy at applebees reckons it’s because of all the Amish horse and buggys plus the weather.
Cynthia the English gps has alerted us to a traffic jam on our journey. Wonder if she is right.
Cynthia was right about the traffic jam but she could have rerouted us.
Made it safely to Philly airport and dropped off the car. Now on train to town to drop off our bags and explore in the rain.
Wow the train is old school. Buy tickets on the train from the conductor. He sticks the tickets in a special slot.
Our hotel is great.  Right next to food market. Two double beds, coffee machine, microwave and even a laundry on our floor.
This is a meal for only one person.  http://twitpic.com/3ns0t
First pair of kicks purchased. $30 usd.   Nike air prestige.
@matthew_hall I think dessert might have killed her if she’d tried to eat that too!
A picture of the Nike air prestiges I bought for $30.  http://twitpic.com/3nw6p
This was the art on the wall in the hotel we stayed in last night. Gives u some idea of the hotels quality.  http://twitpic.com/3nwcx
This was my first philly cheesesteak in philly and it was bloody fantastic.  http://twitpic.com/3nwl3
@GeekPornGirl I think the metro is a fantastic way get around DC. Only thing is the view from the subway isn’t that great. 🙂
@GeekPornGirl you’ll have to give me some tips for when I get over to your side of the country.
Twittering with at and t 3g. Guy says it might stop working. But I’ll only be out $20 if does.
@j3thr0 A fire engine tour of San Francisco looks cool!
@danoz75 Fiona didn’t care much for hers, but I had sharp cheese and onions which may have made a difference.
I am in love with the reading terminal market. Nothing makes me happier than seeing a whole bunch of food stalls permanently in 1 place.
All you can see in this picture is allergy tablets.  http://twitpic.com/3otl4

2 thoughts on “Day 6 – Ronks to Philadelphia”