Lost all my photos of this day *sigh* so all I have are the iphone pictures. *Update – recovered them from the external hard drive!*

Early wake up to pick up the car and check out of the hotel. Our awakening was helped by the cold shower we each had to have. Turns out that the building the hotel is in is a Government building and all government buildings had their steamers turned off on Sunday for some reason.

Downstairs in the hotel restaurant (Poste) for breakfast and I had a yummy egg hussarde which was the first meal in america that I really enjoyed. It’s an interesting mix of potato skins, poached eggs, sauce and bacon. Great service and unlimited coffee. 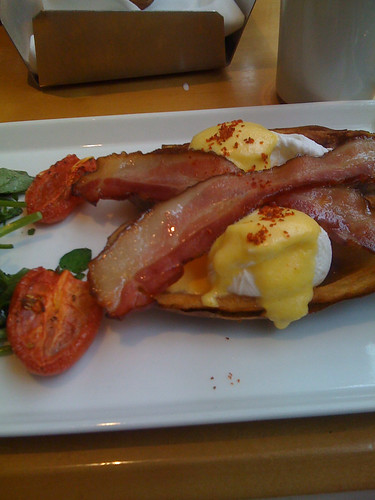 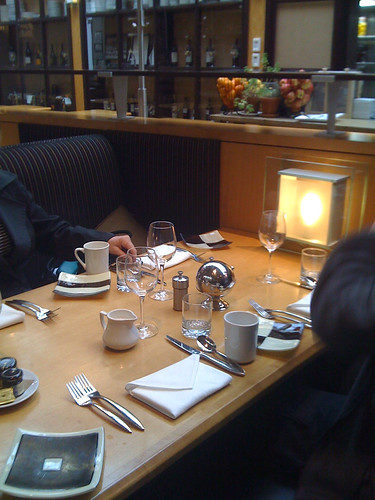 We packed up and headed across the road to the thrifty to pick up the car. Minivans weren’t available when I ordered online so we had to get a sedan. A dodge charger is supposed to manage 4 bags which it did, but unfortunately we had 5 bags. I was all ready to nurse my bag in the front seat, but while a few of us were away on a last minute trip to the toilet Pauline and Fiona teed up the use of a minivan to give us some more room. It was $50 extra, but worth it for everyones comfort. Unfortunately we have another sedan booked on the west coast, so I hope we can manage it then.

The luggage was never going to fit: 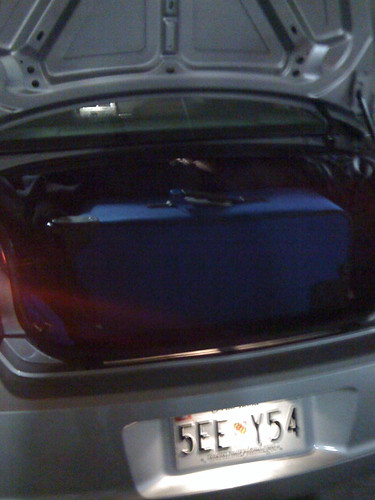 So this is the minivan we ended up with: 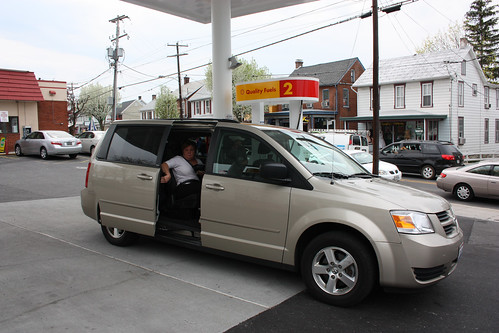 It’s tough trying to learn how to use a gps and direct someone and have them learning how to drive on the right hand side of the road. It ends up with a little bit of yelling “left, left LEFT!” and some swerving and some abuse. But eventually we settle and somehow get us to the Pentagon after a few wrong turns. I’ll admit I was an asshole.

At the Pentagon we decide we want to see the memorial of 9/11 so we parked in a huge carpark that we thought was ok to park in on the weekends. After getting out, the police told us over the speaker that it was a pass only spot, so we got back in and decided to leave. It took me a while to reconfigure the gps because you can’t move when programming it and I guess our stationary state made the cops suspicious, so he drove over, blocking us in. He told us that we couldn’t take any photos of the pentagon, only the memorial and we thanked him and said we would be leaving. A lucky escape.

The memorial taken only from the car: 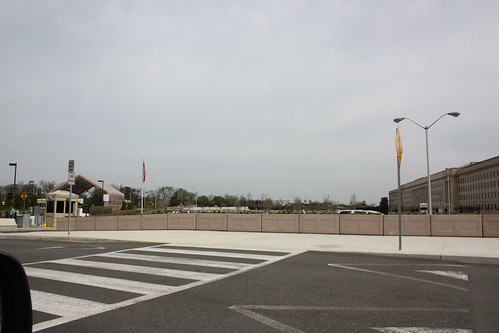 An scenic hour and a half drive along the river and past farms brought us to Gettysburg, the site of a famous civil war battle. The Visitor Centre there was impressive. For $7.50 we saw a film, a cyclorama of a painting of the civil war which was huge and admission to the museum. The whole thing explained the four day battle of Gettysburg well and I left understanding it’s importance to America and the ending of slavery.

Driving past farms to Gettysburg: 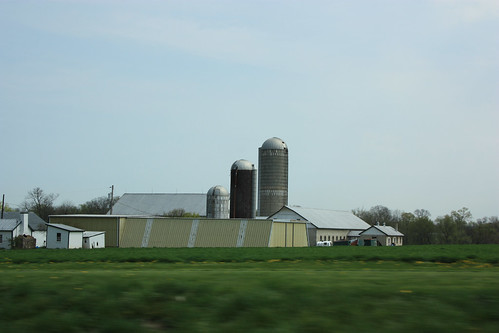 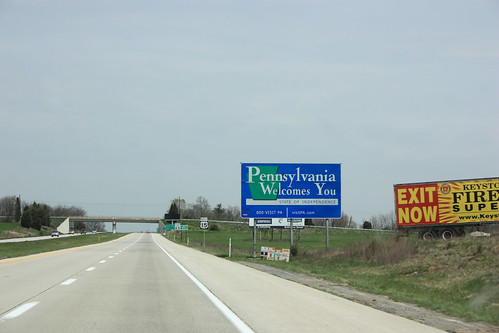 With a fireworks store! 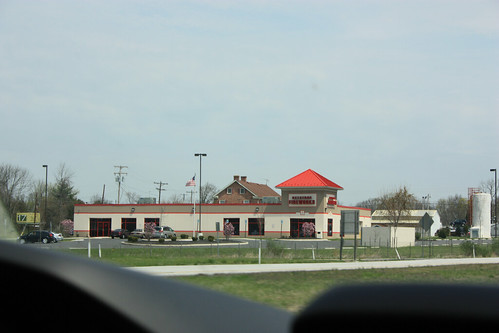 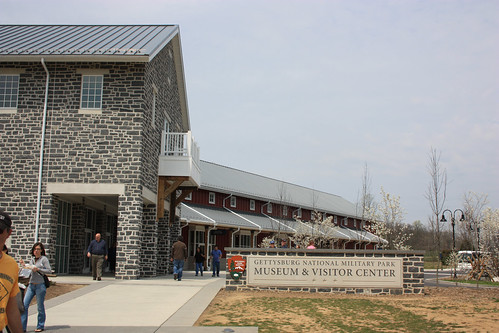 Uniform worn by the Union: 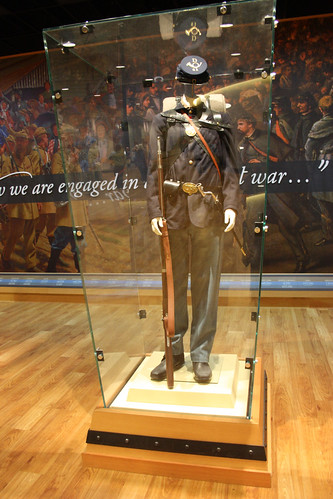 Uniform worn by the Confederates: 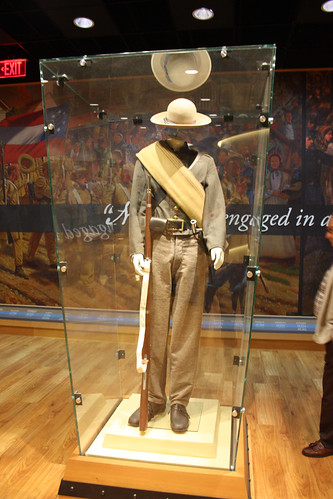 We didn’t have much time to see all of the battlefield but we managed to see enough of it to get a taste. A lot of monuments on the hills and although the town was a little touristy it still looked a little cute.

Is this normal clothes to wear in Gettysburg? 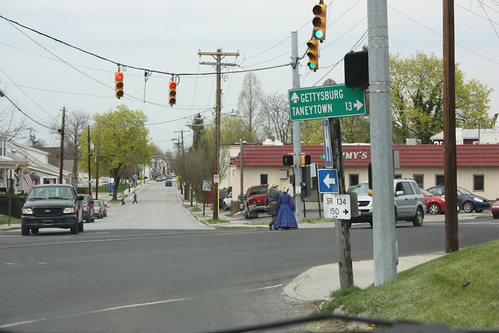 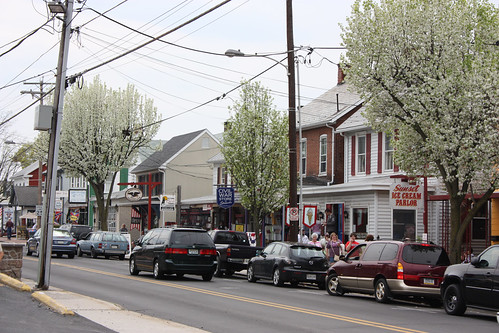 Another hour and a half drive and we made it to Lancaster. Drove in to the old downtown area to try and find the visitor centre. We saw signs to go forward but then the signs stopped. After two gos around we gave up and decided to head to the hotel in Ronks. 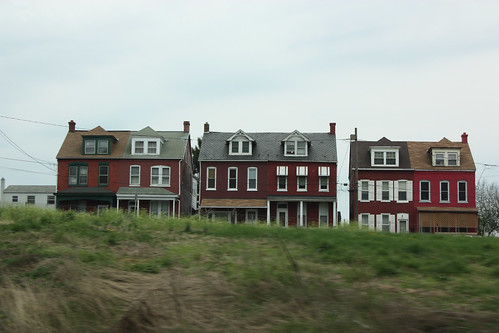 The old and the new house: 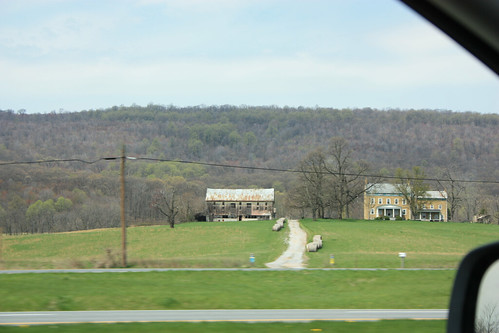 On the way we found the Tanger Outlet store and since there was still one hour left I went mad. Nike store first for a pair of $30 Nike Air Prestige, $34 for a pair of DKNY jeans and $30 for a gap jumper. It was great cause Pennsylvania doesn’t charge taxes on shoes or clothes. 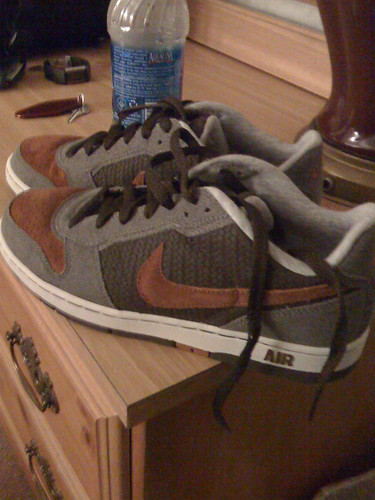 Turned up at our Olde Amish Inn which was a hotwire purchased I’d done the night before. The Amish Inn wasn’t a known hotwire hotel on the betterbidding site, so I was a little disappointed to get it, but I guess since we were in Amish county it was perhaps appropriate to stay there. It was a drive up room with two double beds in each room which was okay, but the decor was very tired. At least it was clean. The good thing about the whole situation was that it had been given too many stars on the hotwire site and after maybe my feedback they decided to downgrade the rating and gave us our money back as hotwire credit so this night ended up free. Fantastic! 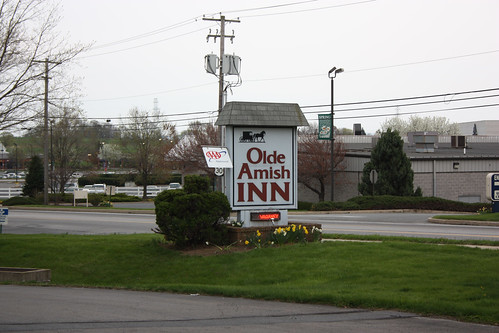 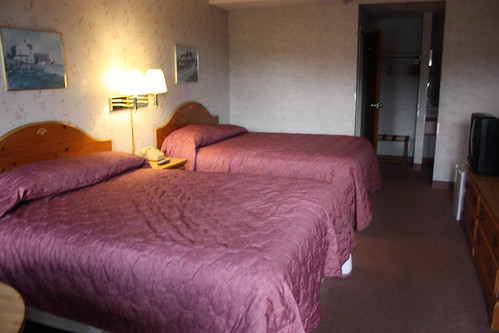 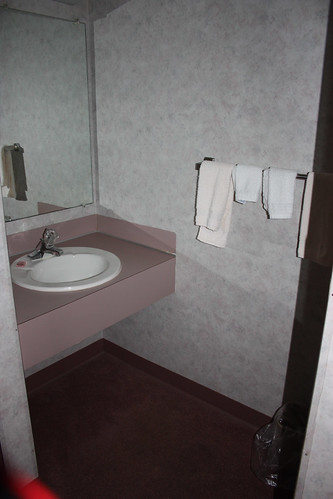 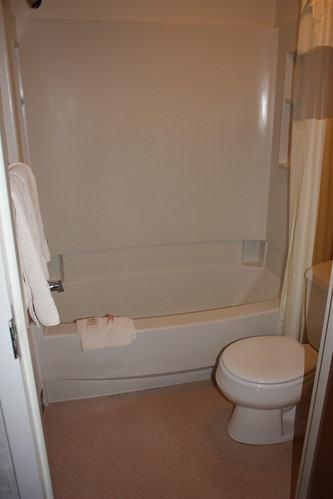 After unpacking our gear we went for a drive to find the Amish. We’d seen them in their horse and buggys ride past the hotel so we figured if we drove down that road we’d find them. We ended up finding a town called Strasburg and the Amish Village which was a tourist trap. Since it was late on a Sunday nothing was open so we ended up at Applebees for dinner. 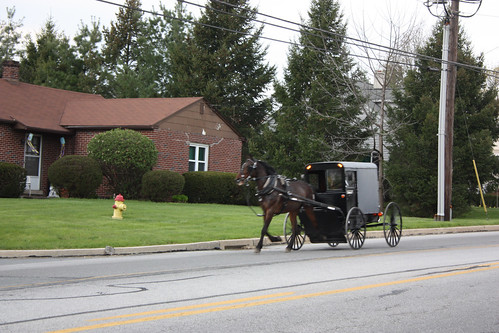 A farm near the Olde Amish Inn: 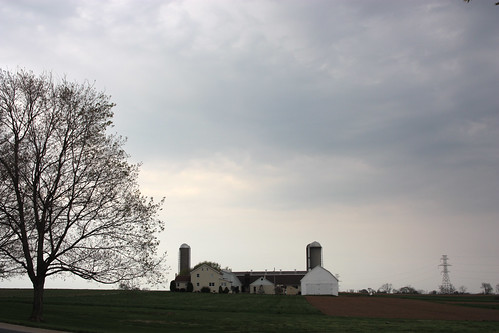 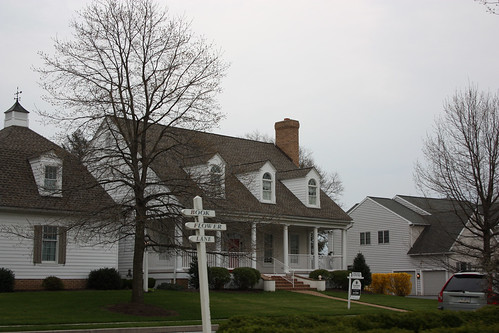 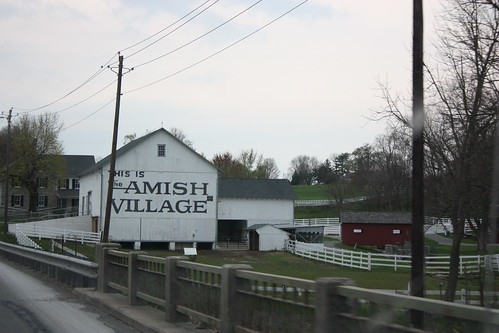 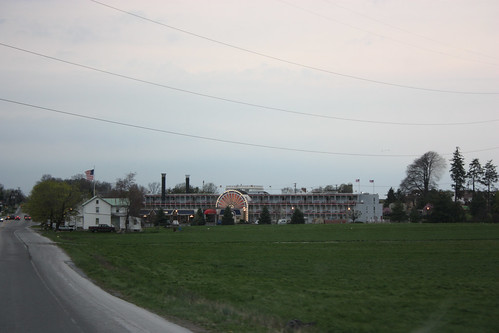 Another huge serving of all the food there but my sirloin steak with mash and broccoli was yum. Even the cocktail was good. Pauline wasn’t too fond of her steak and Auntie Sues meal for 5 went unfinished. At the end our waiter gave us the lowdown on the Amish, having grown up with them all his life. They have a very simple life and can use motorised things like tractors, but they can’t have rubber tyres – only metal. Also, the men only grow their beards once they are married, so if they are clean shaven they are single.

Really excited to be here: 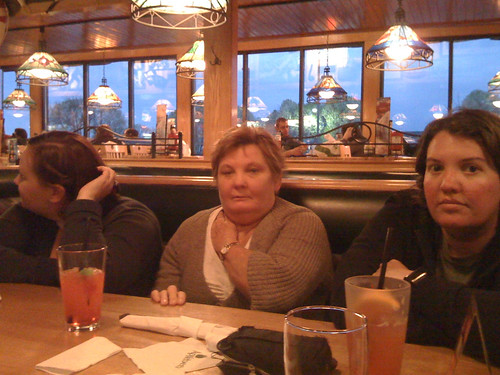 All this just for Auntie Sue? 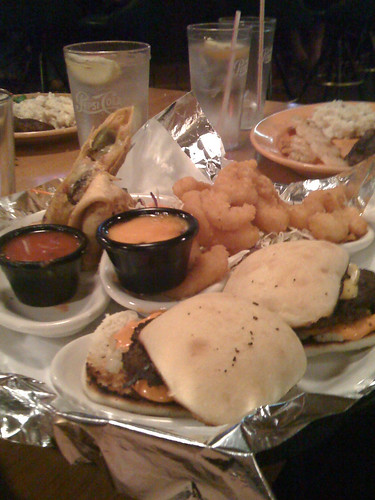 Back at the hotel we passed out happily.

The stunning art on the wall at the Olde Amish Inn: 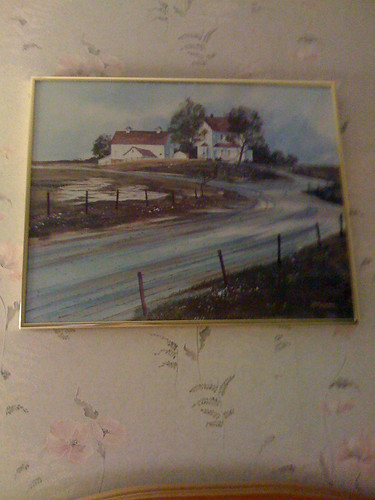 The two mysteries of the day were “Why do some houses have stars on them?” and “Why are there fake candles in the window?”. 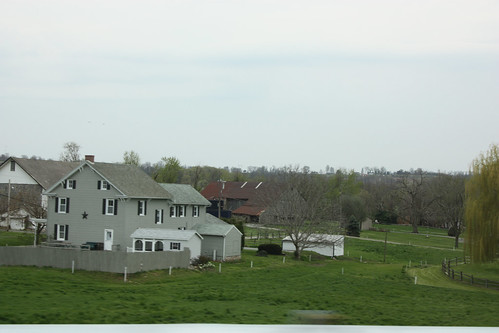 Damn. Come in to the hotel restaurant for breaky on our last morning and discover that they are serious about their cocktails. Too early?
Mmm eggs hussarde  http://twitpic.com/3lc5o
About to leave our last lux hotel till cape cod. Sad.
Hired a van and a gps and after a few false starts and some yelling and swerving we have settled and got it sorted.
Stopped at the pentagon memorial to visit but got accosted by police before we left the car. Turns out we were in a pass only area. We left
Gettysburg was good but we didn’t have enough time to see much of the battlefield. Visitor centre was top class.
Wow that was unexpected.  Missy higgins on the sattelite radio. Went for the pop blend to offend no one.
In 1 hour in an outlet store I bought jeans, sneakers and a jumper for under $100. Brands were dkny, Nike and gap.
It’s weird seeing horse and buggys zoom past our hotel on the road. Lots of horse poo on the ground too.
Applebees for dinner and I reckon 20 potatoes died to appear on my plate as mash. Too bad I only needed to eat 2 of them.
Our hotel is one of those ones u see on csi where someone was murdered. At least it’s clean.
People here have fake candles in their front windows for some reason.