Opening the windows of our hotel room on the 26th floor was inspiring and made us ready to go out and see the day. We were ready to go at 10.30am but Sue and Fiona weren’t so we left them behind for the day. Decided to go see the space needle and Experience musc project but first we needed breakfast. Ended up in the westlake centre having ham, cheese, tomato and basil breakfast crepes while mum had a banana and cinnamon one. The crepes were wrapped in cardboard which made it a little awkward to eat – mum ended up just breaking hers apart with her fingers.

The view out our window at the Sheraton Seattle: 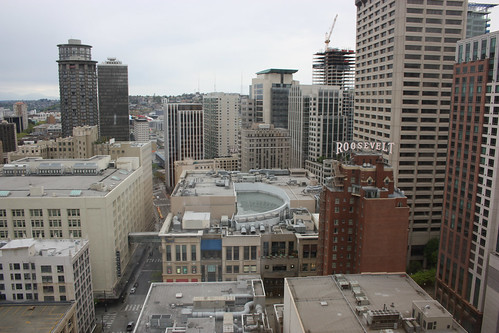 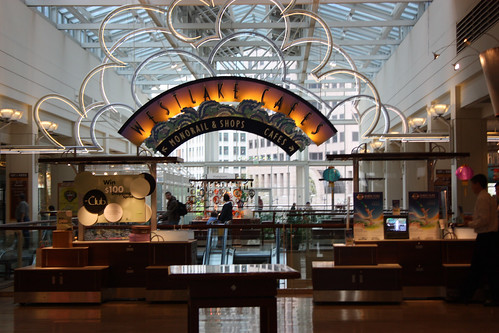 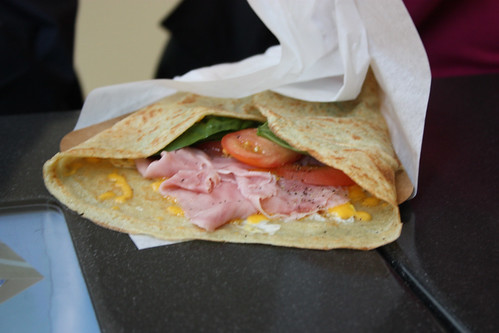 After breakfast we paid $2 to get on the monorail to the Seattle Space Needle since it was drizzling with rain and we didn’t want to walk. The monorail had a driver which I found odd. It took us straight to the needle and within minutes we were at the top – no Empire State Building type lines here. In fact it was really quiet in the city all morning. At the top the view was great and the story on how the needle was built was really interesting too. It was made for the World Exposition in 1962 kind of like how the Brisbane Sky (Stefan) Needle was made years later in Brisbane for the World Expo 88. We lost mum in the gift shop for a while then headed of to the Experience Music Project.

The building is a Frank Gehry building made of interesting shapes and materials, which always draws your eye to it. For $16 we got entry to it and the Science Fiction museum which is in the same building. Both were created by Paul Allen, the microsoft billionaire. The music project had an interesting history on Seattle music, where I was surprised to learn that Heart were from there. There was of course some Nirvana/Mudhoney/Pearl Jam displays and a large section dedicated to Jimi Hendrix including a bunch of his guitars. What was more fun upstairs though was the music jam area, where it taught you how to play real instruments in little recording type studios. Kind of like a real life guitar hero. Of course, we didn’t get to play much because there were tonnes of kids there. Mum enjoyed the experience a lot more than I did, I think because she had low expectations whereas mine were high. She also really likes Jimi Hendrix.

Monorail at the Seattle Space Needle: 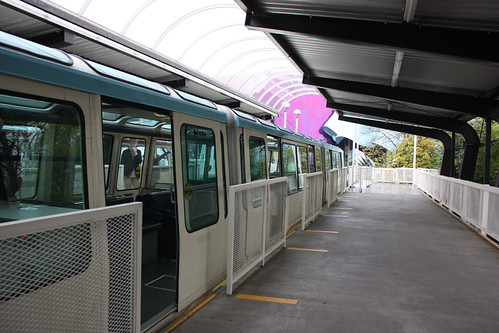 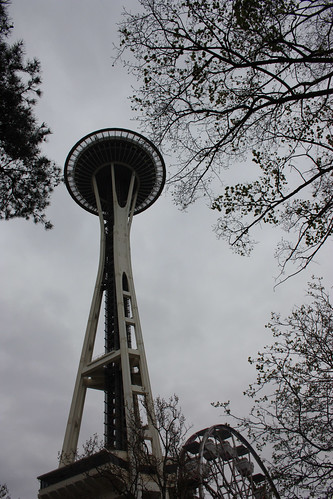 Rainy day at the Space Needle: 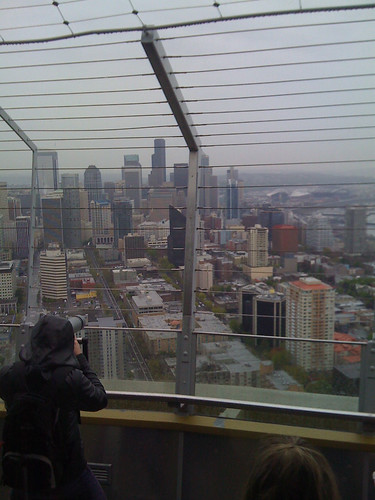 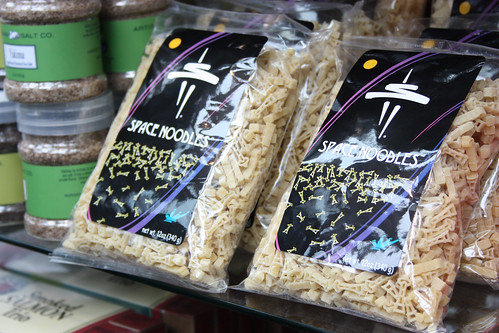 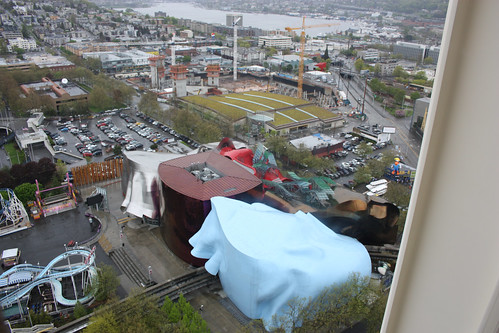 The Sci Fi museum was Pauline’s highlight. Upstairs was mainly a few displays of costumes and props from movies like Bladerunner, Battlestar Galactica and AI. I enjoyed watching Robbie the Robot talk to the Lost in Space robot and we even saw an r2d2 replica.

Downstairs was more space like and a little more fun. They had a terminator 2 head and rockateer suit. There was also a spaceport the size of a huge windscreen where you could watch and control different ships going by. I didn’t get to play on it though cause there was always someone there. There was also a great Jetsons window where they were kind of in 3d that I enjoyed sitting and watching. 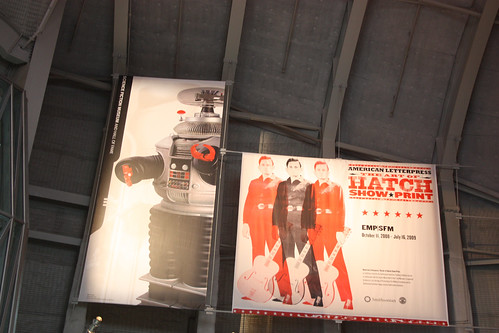 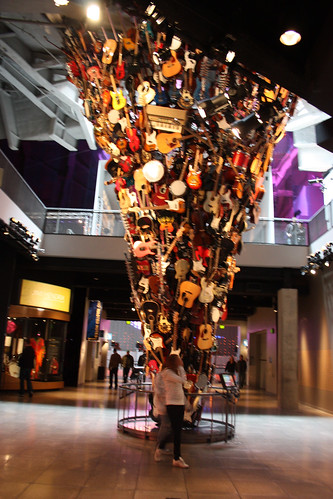 After we’d seen everything we decided to leave Mum and visit the REI store which was quite a walk away. We walked up Denny Way until we found a Whole Foods which of course we had to visit. I bought a drink, then instead of walking up the hill we avoided it by going via the whole food escalators outside to the top of the hill. I was extremely lazy today.

The REI store is like Anaconda but 10 times bigger. They have a huge climbing wall, a track around the outside to test a mountain bike and a trail to test your hiking boots. We were primarily interested in a rain jacket but didn’t find anything that suited. Well, we did, however at $400 it wasn’t too appealing. 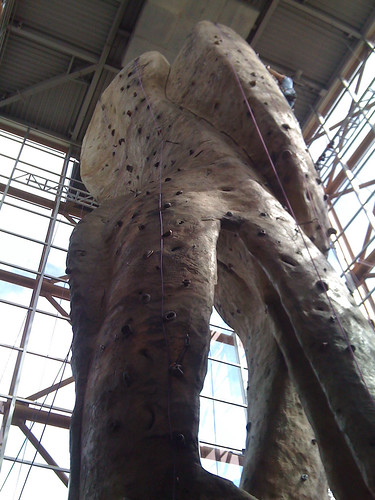 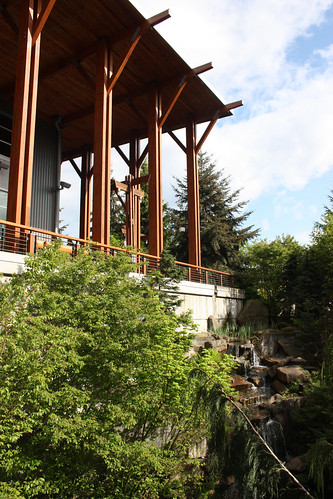 We walked back to the hotel and hung out for a little while until we realised happy hour was still on down in the hotel bar and there was only 15 minutes left. Racing downstairs we managed to take advantage of 1 cocktail each since mum joined us. After finishing our cocktails, which were ok, but no Little Jumbo or Bowery, we headed in to the Daily Grill restaurant for dinner. I bought a Prix Fixe dinner of Lobster Bisque soup, Filet Mignon with baked blue cheese topping and sauce and a key lime pie all for $24. Of course I had to take dessert away with me because there was no way I could eat it. Pauline had pork ribs and mum had fish and chips. My filet mignon was the best of the night. I also had an Old Fashioned cocktail with markers mark which I didn’t really like, but it succeeded in getting me drunk. I left the others to pay the bill so I could go to the toilet and by the time they had arrived back after visiting the pool I had passed out asleep. Rocking night! 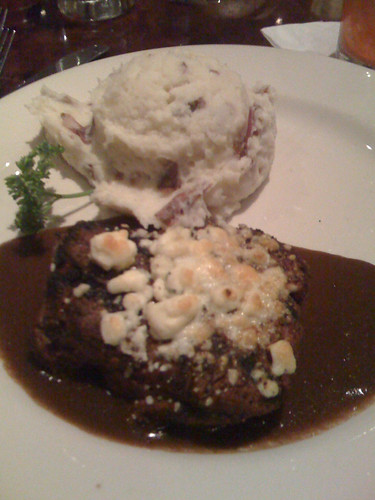 @Kelsbells sorry u are disappointed. Mum tried to flush it and it didn’t work. Looked inside, broken chain. Fixed by maint man.
@Kelsbells noise cancelling I hope. Mine allowed me to get 1.5 hours sleep on the plane even will listening to Sirius chill out radio.
Wondering of the 4.4 earthquake in Malibu mtns was the first round in the big one @clialios predicted.
I guess since we are in Seattle it makes sense to stock this in the hotel room. http://twitpic.com/4elxm
Realized that I forgot to attach a photo of the view from our room. My excuse is that it was 2am. Here is a day 1. http://twitpic.com/4emzz
Totally geeking out on the microsoft surface table in the hotel lobby. Not as smooth as the iPhone though. http://twitpic.com/4f01w
It’s a little bit drizzly on top of the space needle but at least it’s not cold. http://twitpic.com/4f6v8
@MiNGLED I was shicked too but I am in Seattle, the home of microsoft. 🙂
In the experience music project. It’s like guitar hero world tour but with real instruments in studios. http://twitpic.com/4fhsd
Just saw the robot from lost in space. Enjoying the sci Fi museum.
Walked up a hill or two to REI purely to annoy michael k. Cause look what they have. http://twitpic.com/4fshw
@j3thr0 it’s a climbing mtn in an outdoor store. U can try shoes on a hiking trail around the store before u buy
@j3thr0 it’s like anaconda but better
Happy hour in the cocktail bar in our hotel. Woo! http://twitpic.com/4g66l