An early 6.30am start for me since I don’t think my time zones were in order yet from the east cost hangover. I headed down to the lobby to surf the net after waking up Pauline due to me getting the safe combination wrong trying to get my laptop out. Damn beepy noises. On the net I booked our LA accommodation using hotwire and got Le Parc Suites, a hotel I was kind of hoping for so that was good. Also had to transfer some cash to my credit card cause I was $64 away from becoming overdrawn!

At 9.30am we all headed down to Pike Place Market for breakfast. We visited the fish shop that is famous for throwing their fish around. There were a bunch of girls taking photos when the salesman behind the counter pulled a monkfish hanging down that scared the shit out them. It was fantastic. There were more people hanging around than actually buying stuff. 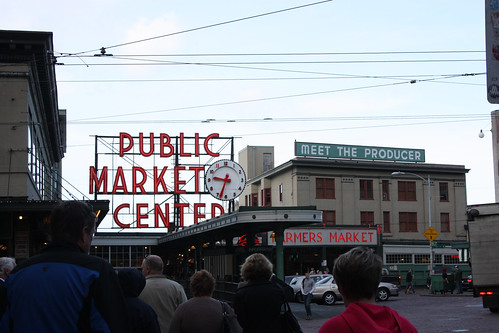 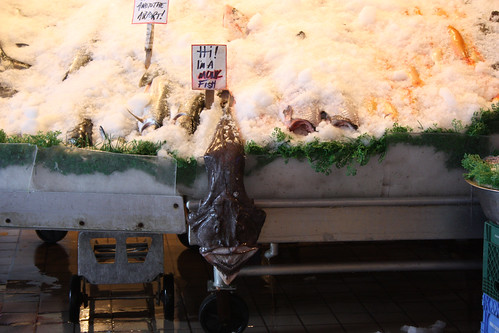 In the markets we saw some fantastic produce, ugly barettes, cheap tshirts and the first starbucks still in existence. It doesn’t use the logo known to us all and instead still uses the original. It also serves a special blend I think you can only get in Seattle. We decided to have breakfast at Lowells but since I had already had some of my leftover key lime pie from the night before I only bought a bagel with cream cheese. Mum had an excellent cinnamon bun while Pauline and Auntie Sue went for the combo breakfast, bacon, eggs and pancakes. Fiona went for a shrimp and mushroom omlette. All were nice but nothing to rave home about. 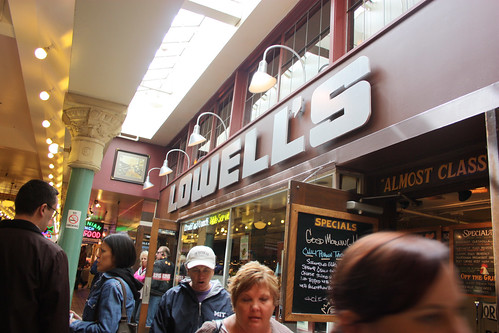 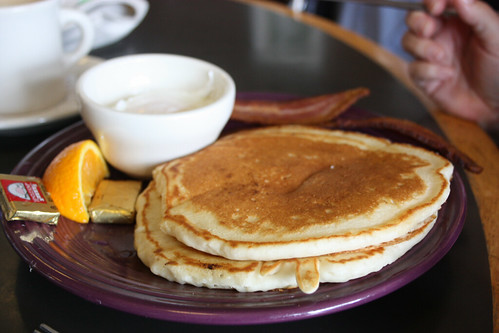 Raspberries at the markets: 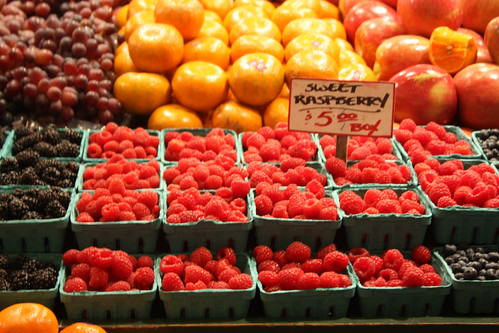 We continued wandering around the markets, my favourite shop being a comics store downstairs in the less travelled area of the markets. They had lots of full size characters – Super Obama being the best We also found some toilets that had doors so high you were afraid to open your legs! 😉 I took a hurried photo of them, so as not to seem pervy. Leaving the markets we headed down 1st Street past Fran’s chocolates for some salted caramels. i was only going to buy 3 until I tried a sample and upgraded to the 24 pack. 🙂 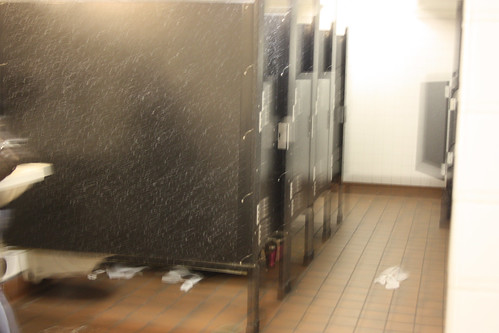 Super Obama and his green… schlong?: 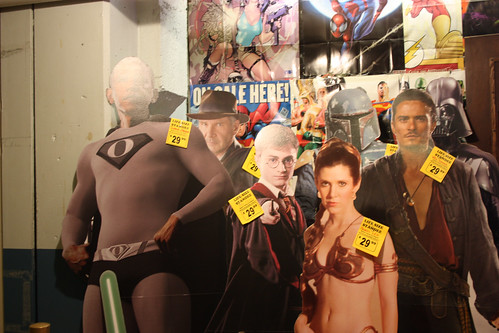 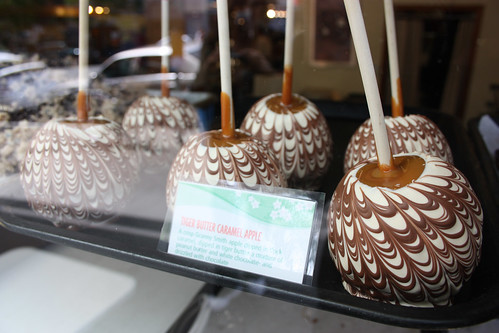 After Fran’s we kept walking down 1st Avenue to Pioneer Square at the Underground Tour. I thought this would just be a normal tunnel type tour but was absolutely impressed when I found out what the tour really was. It began in an old bar/theatre where we got a rundown of Seattle’s early history by our guide Kim. She explained that the downtown area of Seattle was built on mud flats and after the great fire they decided to rebuild the city bigger and better by landfilling the ground. Only thing is, they did it around existing buildings, so that by the end of the work (around 30 years) the first floor was the basement and the second floor was the entrance. Kim was an excellent tour guide and I was clambering for a book by the end of it. What was great about the tour too was that it wasn’t all clean. We had the wink and nod stories about the prostitution that went on in the town. There were really only two industries in Seattle at that time, lumbering and ladies of the night. Most of the tax was gained from the ladies mind you. I think it was my favourite tour on the entire trip thus far and I was almost tempted to buy the sub tour that visits the subcultures of Seattle.

Standing inside an old shop waiting to go outside: 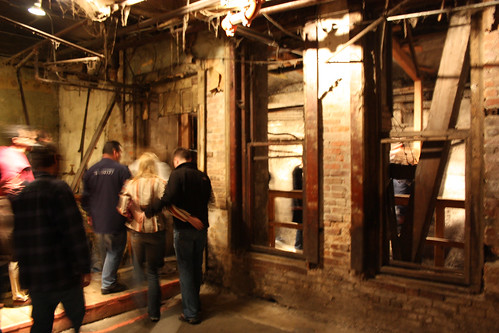 Walking down the old streets of Seattle: 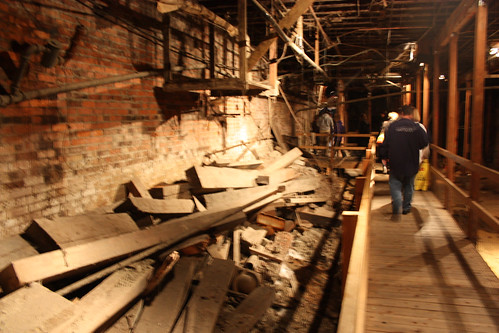 Going down to the underground: 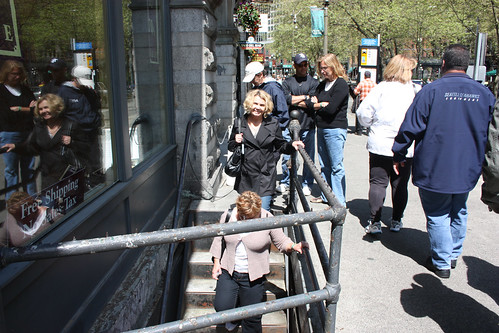 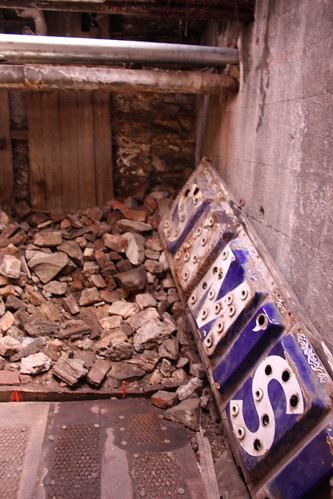 Fiona is scared by the ghost behind her: 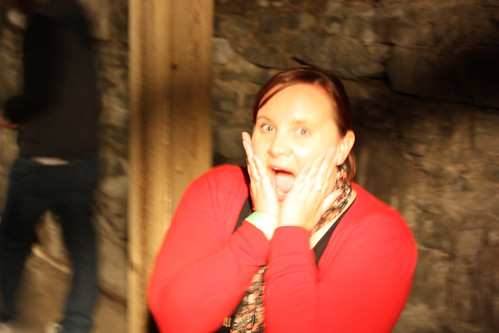 Just to prove we are underground: 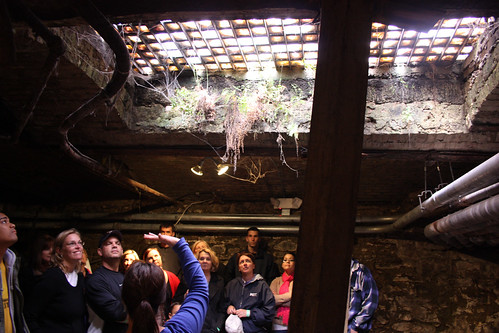 And the overground view: 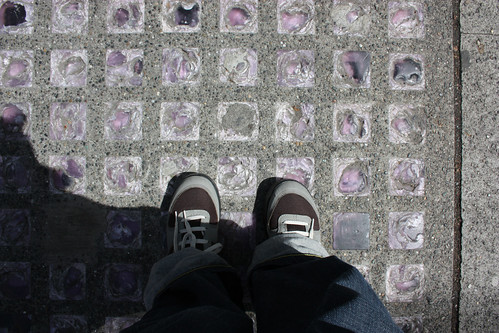 After the tour Pauline and I headed to do some shopping in Radio Shack and the drugstore and then ran in to the rest of them in Macys. I tried to find Whole Foods to show Auntie Sue but google maps failed me terribly. We ended up going back to the hotel where I stayed for the rest of the night just chilling out and packing bags ready for the early departure the next morning. 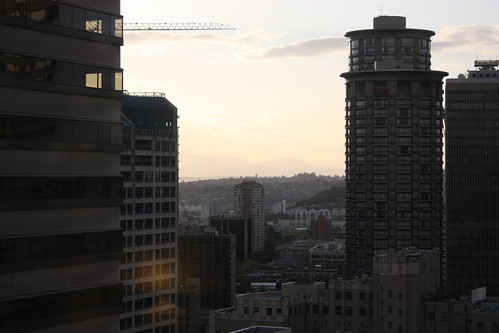 I am left feeling Seattle was pretty and that I didn’t even scratch the surface of seeing it. I think this goes on my list as a “I’d like to visit again”

Doing some holiday “admin” early in the morning in the hotel lobby because its free down here, but not the wired net up in my room.
Noisy breakfast at Lowells in Pike Place Market overlooking the water. Haven’t tried the food yet. http://twitpic.com/4hkos
Found super Obama at pike place market. http://twitpic.com/4horj
About to go on an underground tour of Seattle. It starts in a really cool old bar. http://twitpic.com/4httr
@GeekPornGirl a big one? 🙂 we had 2 weeks on east and now 3 on west. Pick up some more ppl in San fran
Seattle underground tour was great! Who knew they had such an interesting history?
@GeekPornGirl should be down that way in a week. Been to Cali before and loved it.
@Kelsbells more USA spending money for u! Woo!
Fran’s salted caramels are as good as obama thinks. Aren’t to @digitiel taste though which means more for mum and I http://twitpic.com/4iidz
Spending some downtime in the hotel room. Soon I’ll need a holiday from my holiday.